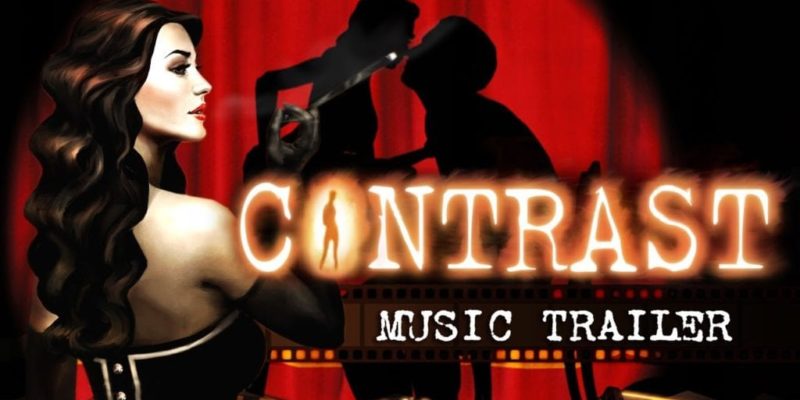 I’m going to try to talk Paul and Peter into instituting a new rule. I call it the Giant Spider Rule. If your game contains a giant spider for absolutely no good reason, the game’s score goes down (because everyone knows that the score is the most important thing about any review).

Lord of the Rings game? That’s fine. Giant spiders allowed; they’re canonically acceptable. Game in which you play a small insect? Okay, fine; spiders are thematically appropriate, and they’d certainly seem big if you were a fly or something. Stereotypical fantasy RPG? Eh. Maybe lose a point for being unimaginative and trite. Stylish puzzle-platformer set in a vaudevillian version of 1920s Paris? Piss off.

Light is bright, shadows are thick and tangible, and silhouette plays a big part. Noir has clearly been an influence here.

And that, dear readers, is what Contrast is. Er, I don’t mean it’s pissing off; I mean it’s a stylish puzzle-platformer set in a vaudevillian version of 1920s Paris. You play Dawn, the possibly-imaginary (and silent, and completely void of personality) friend of a troubled little girl called Didi. Didi’s mother is a lounge singer, while her absent father is a low-rent criminal with a heart of gold and a bad streak of luck, kicked out of the house after another of his get rich quick schemes blew up in his face. Didi wants to reunite her parents, but her father’s latest scheme promises more trouble than usual, so it’s up to you to help them out.

There is a lot that I genuinely love about Contrast. It’s well written and well voiced, and there’s bags of style throughout. The heavy focus on bright light and pitch-black shadow evokes the tone of film noir, and the slightly exaggerated character models tie in with the dialogue to give everything the feel of a slightly dark animated movie.

Didi is the only character other than Dawn that you actually “see”; everyone else is represented only by their shadows, and those shadows lend a very particular atmosphere.

Not that there are too many character models. Didi is the only person that Dawn can actually physically see; everyone else is completely invisible, made perceivable only by the shadows they cast on the walls. As you don’t directly interact with anyone but Didi directly this never causes a problem; again, it just adds to the sheer style of the thing, particularly when you wander into a conversation between a pair of mob lieutenants, and it’s acted out by twenty-foot shadows cast on a spotlit brick façade.

This interplay between light and dark is also essential for the gameplay mechanics. Dawn is an acrobat, but she doesn’t just leap around the 3D world – she can shift into shadow, running along whatever other shadows have been cast (in 2D, naturally) and then leap out into the “real” world again. This is where both the “puzzle” and “platformer” bits come in.

Making sure shadows are created in the right places is one of the key mechanics. This early section has Didi shining a spotlight to help create them, so that you have platforms to run across.

Most of it comes down to figuring out how to get from A to B, which usually involves leaping in and out of shadows and the 3D world. Cleverly, though, you can alter most of the shadows that are present; they’re almost always being cast by something tangible, and you can often move that something tangible to adjust the shadows. There might be three cardboard cutouts with a bright light shining on them… so if you move those cutouts, you can turn their gigantic shadows into platforms that’ll let you get up to an otherwise inaccessible area.

This, honestly, is something I find a bit mind-blowing. I’ll grant you that it’s not TOTAL ENVIRONMENTAL DESTRUCTION or whatever’s being championed in the triple-A title of the day, but it’s taking a visual effect (which is properly calculated based on the shape of the object, and the direction and distance of the light) and turning it into a physical gameplay mechanic.

Collectibles scattered throughout the game’s three acts give details on the game’s characters and offer a little more backstory, although the ones in the third act do perhaps ruin a little of the game’s sense of wonder.

Alas, it never really gets more complex than that. You get a dash move that lets you break down thin walls or move through thin shadows, and you can drag the odd environmental object – crates, or balls – into the shadows with you, but that’s pretty much it. Not too many of the puzzles are all that mind-bending, either; the majority of the game really is just figuring out how to get from one place to another, and generally, if you can find some objects to move around that change the shadows cast on the walls then you’re halfway there.

On the plus side, there are a few wonderful setpieces. The second of the game’s three acts revolves around fixing up a cobbled-together carnival, which gives plenty of opportunity for some big buildings and different environments. For instance: the shadow play is missing its princess, so obviously Dawn needs to don a hat, shift into shadow, and play the part of the princess in a side-on platforming section narrated by Didi’s father. This, incidentally, is where the giant spider turns up. I suspect it might be a Limbo reference but I DON’T CARE. Huge eight-legged nightmare machines have no place in this game.

On the downside, there aren’t actually many opportunities for these wonderful setpieces. According to Steam, I finished the game in just over three hours, and that’s including the times I got stuck on puzzles and the occasions when I restarted sections. This is a remarkably slight game, and while it tells a personal story that feels complete and self-contained, it could possibly have done with being a bit longer. Because of the puzzles it may well take you longer (or be even shorter) depending on how you cope, but it’s still not a lengthy game; I suspect that if I put another hour in I can probably get 100% completion.

Which leads me onto the other problem, and it’s something I’ve complained about in just about every review I’ve done in the past couple of months. I talk, of course, about bugs. And no, I’m not going on about the spider again.

Some of these are understandable, and some aren’t too problematic. I can tolerate the moments when the shadow shifting doesn’t quite work properly and you have to redo a jump. Less tolerable are the points where you get stuck in walls, or a necessary object gets stuck somewhere inaccessible, and you have to restart the section from scratch. The worst, though? The worst problem is the animation bugs.

Complaining about animation might seem like a minor thing in a game that has an occasional habit of getting you stuck in walls and only really features two character models, but here, it really is important – to me, at least. As I said back in one of the early paragraphs, this is a game with bags of style. It’s a game with a huge amount of personality, and a very unique identity. As such, having characters suddenly shift into the default model pose – the arms-outstretched, legs-straight, T position – for no apparent reason, and maybe slide along the floor in that pose for a moment, is… bad. It breaks the immersion, and kills the otherwise delicious tone.

Which leaves me in a bit of a pickle. I really, really like Contrast; it does something unique and clever and it does it rather well. Although the gameplay never quite feels like it gets going, I like the story it tells, I like the way it tells it, and I like the general aesthetic. That extends to the sultry, jazzy, blues-y soundtrack, which is quite possibly some of the best music I’ve heard in a game this year, and yes, that’s why I embedded the music trailer a little way up. It’s so good.

On the other hand, it’s altogether too slight, it’s buggy, and it regularly shatters its own wonderful atmosphere with bugs and glitches. There’s a lot to love here, but – like its adult cast – it’s damaged goods.