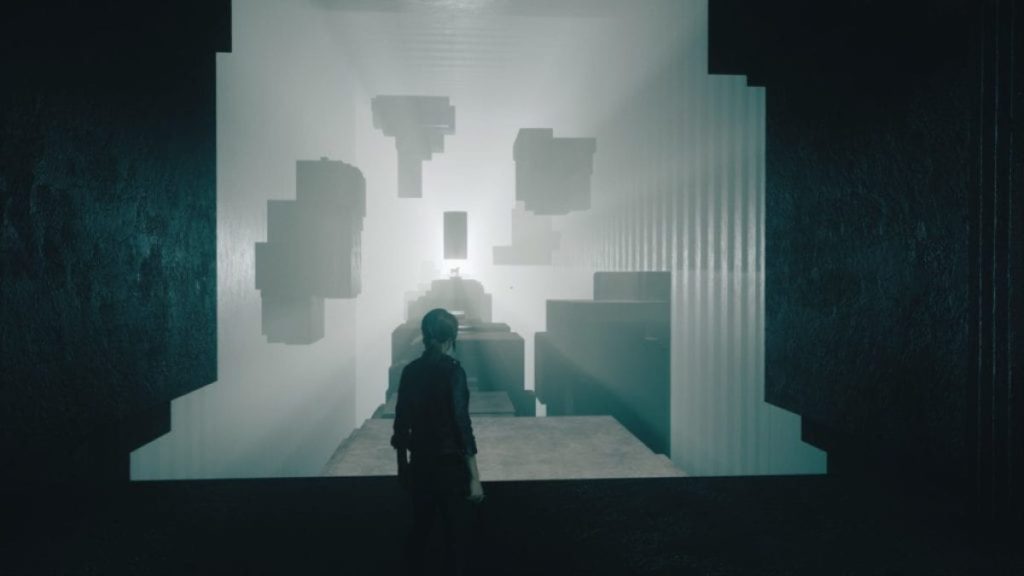 If you like having a big dose of weirdness in your action game, then Control is definitely the game for you. Developed by Remedy Entertainment, the game pushes the boundaries of sci-fi mystery storytelling while pushing the envelope graphics-wise with its extensive use of ray tracing technology.

You play as Jesse Faden, a woman who walks into a secret interdimensional nexus called the Oldest House, located in the heart of Manhattan. She assumes the directorship of the Federal Bureau of Control (FBC) – an agency that studies and sometimes combats the supernatural – when the previous director experiences an untimely death. Jesse turns out to be an ideal candidate for the position since she has a mysterious connection with the supernatural and the Bureau, which is slowly revealed as the plot plays out.

It also helps that a living shapeshifting gun called the Service Weapon chose her for the job. 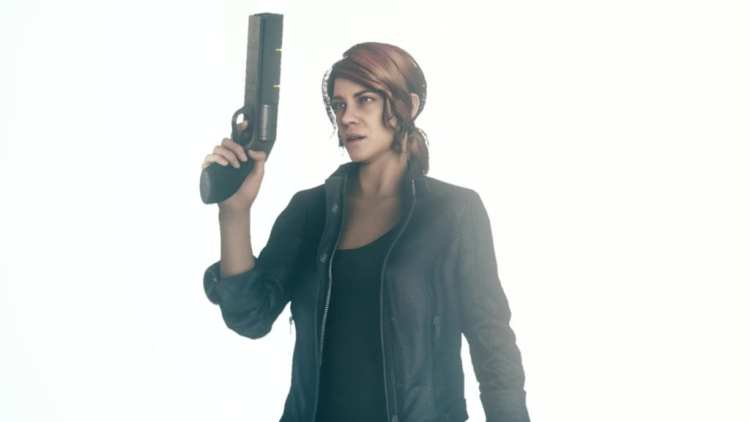 She arrives at the perfect time because the Bureau is under attack by an extradimensional alien force called the Hiss, which takes over the minds of many of the Bureau’s personnel and threatens to take over and destroy the Oldest House.

Without giving away too much, what follows is an insane story that does its best to mess with your mind and often succeeds. From seemingly omniscient janitors to possessed objects and disturbing puppet shows, Control revels in leading players down a rabbit hole, and it’s hard not to be completely pulled in by it.

Learning to control yourself

Control plays as a third-person action shooter, where players must strategically switch between using different gun modes and special abilities.

Players can unlock several Service Weapon forms. It starts as a surprisingly long-range pistol and can be modified to transform into a shotgun, submachine gun, and more. Players don’t need to pick up any ammunition since it automatically recharges when not being used.

However, only two forms can be put into active mode at a time, and players press a key to switch between them, which can kind of making changing weapons a pain. Instead of simply assigning each form to number keys, players must pause the action to click through a menu and assign new weapons. 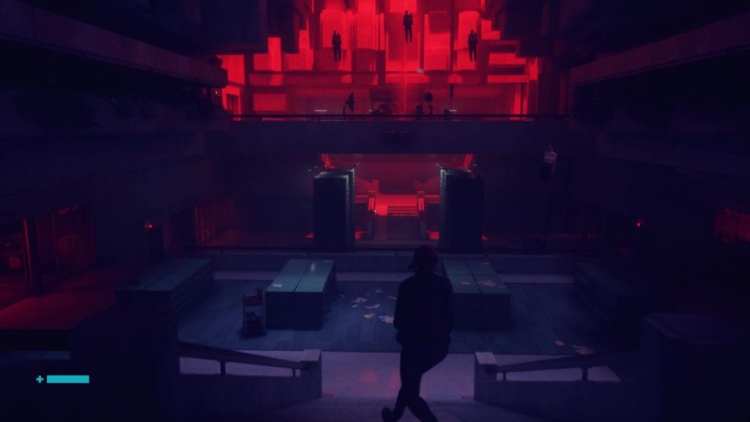 In any case, it’s rare that players can or may even want to rely solely on the Service Weapon, since it quickly runs out of ammunition and needs to recharge. Combat is all about switching between using the gun and special powers to defeat the Hiss.

Jesse acquires a host of upgradable supernatural abilities, starting with telekinesis, which she uses to violently hurl objects at foes. However, players need to be somewhat mindful of what and where they throw things, since objects may get caught on things like nearby furniture or door jambs. Similar to the Service Weapon, her powers deplete her energy bar. If players completely drain it, then they’ll need to wait for it to fully recharge to use abilities again.

There aren’t necessarily any standout abilities that surprised me, and the skill tree is fairly straightforward. However, there is an incredible amount of detail, with environments that can be completely wrecked in a fight. You can also get in extra hits by pulling objects toward you through enemies, then throwing those objects. My favorite is plucking an enemy rocket or grenade from the air to throw back at foes, which is deeply satisfying. Also, many of these powers open up new opportunities to explore the Oldest House and discover some of its secrets. 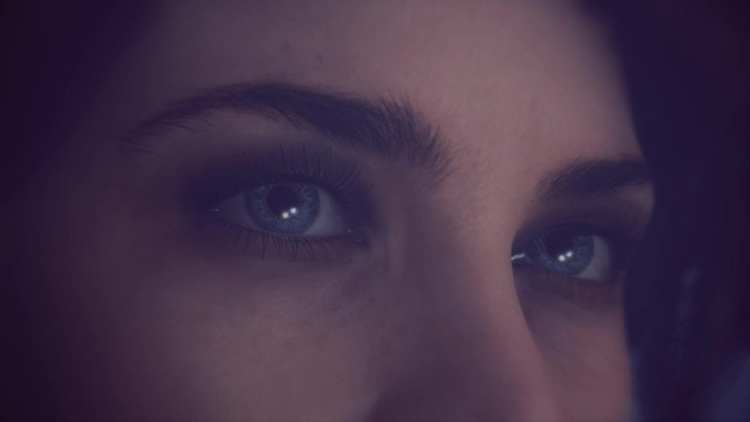 Control features a ton of extreme close-ups of Jesse’s eyes.

Players will need to remember that the game includes friendly fire, and there is an absurd number of explosive objects in the Oldest House. Oftentimes, I was as much a threat to myself as the Hiss were. Although this can be a bit annoying during fights, the issue truly becomes a problem during side missions where you have to protect FBC personnel. Between all the rockets and other objects flying around, and the fact that your troops simply aren’t very good at defending themselves, these missions can end up being way more difficult than they should be.

The Hiss are tough enemies, but not always because they’re especially smart. There are plenty of times where I was able to defeat soldiers by standing behind an unbreakable wall and peeking out at opportune times.

Instead, the challenge comes from their numbers and the limitations of Jesse’s health recovery. Health doesn’t regenerate by itself in Control. The only way to heal is to interact with a control point that you’ve cleansed or by picking up blue vials dropped by defeated enemies. So, you’re pretty much screwed if you’re trapped in a room with low health and a dozen enemies outside.

Hiss also have numerous advantages, such as how waves of soldiers teleport in. So, you may enter a room to take on a small handful of enemies, but they soon multiply with soldiers suddenly popping in from out of nowhere. That includes having multiple enemies materialize in front of you, behind you, or in some unseen spot. 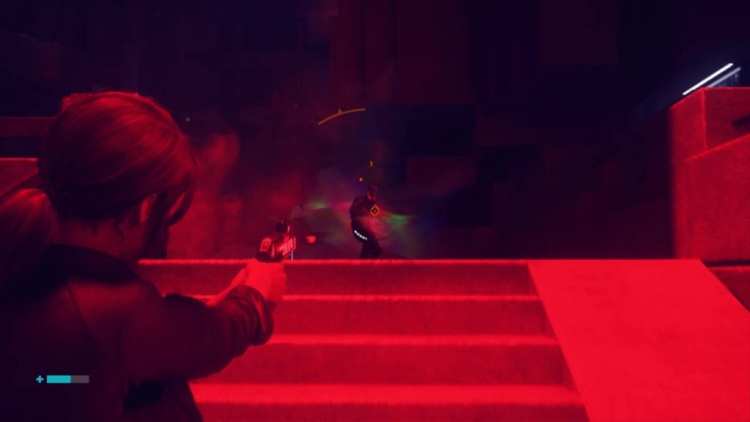 Combat can be hectic, and the red lights can make it hard to see.

Although the Hiss may spend half their time trying to shoot you through walls and floors, they also compensate with a host of weapons that radically shift the odds in their favor. In particular, some Hiss mobs come with a healing portal that makes some of their bigger soldiers near invincible. They can also launch Jesse-seeking rockets that can make sharp turns. So, stepping to the side to avoid a rocket often doesn’t work. You’ll use your dash power all the time, and sometimes that won’t keep you from getting hit by a stray bullet or hurled object.

What makes matters worse is that neither Jesse’s rocket launcher nor throwing their explosives back at them do nearly as much damage. Some Hiss have protective shields around them and can dodge thrown objects, which can render both your Service Weapon and main ability ineffective. So, it can sometimes feel like the Hiss have more ways to deal with you than you do with them.

But it’s some of the boss battles that are truly infuriating, particularly ones where you’re locked in a room with a giant creature. Single giant enemies don’t drop a lot of health vials, so it’s usually an exhausting struggle to defeat them.

Fortunately, there’s no death penalty for dying. Jesse simply appears at the nearest control point as though nothing happened. But that means that she has to do everything all over again — going through all the rooms leading up to the boss to flip all the switches and kill all the enemies that teleport in.

Control offers some exciting fights, but I think these locked room boss sequences are often more frustrating than they are fun.

The building will shift and transform as Jesse makes her way through it, cleansing areas from Hiss influence. Remedy has outdone itself with the size of the Oldest House and the crazy designs of some of the areas. The graphics in Control are simply amazing, and much of that can be attributed to the ray tracing technology featured in the PC version.

Control uses more Nvidia RTX features than any other game right now, and they bring an incredible amount of depth to the game. The most stunning uses of ray tracing are with opaque reflections (light reflected in puddles and floors), transparent reflections (objects reflected on glass), and contact shadows, which all bring considerably more depth to the environment. 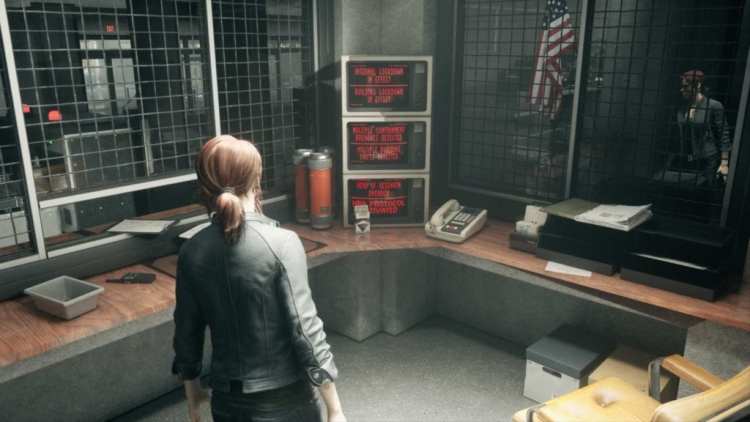 It’s hard to go back to playing without ray tracing after experiencing it.

So, suffice it to say that if you’ve been waiting for a good reason to upgrade to an RTX graphics card, Control is definitely the game to do it for. However, there is a significant performance cost. I have an RTX 2070, and my game averaged around 40 fps in most areas at 2560 x 1440 resolution. It occasionally dipped to low double digits during some of the more effects-heavy fights. Enabling DLSS, which uses machine learning to improve frame rates, helped somewhat as did decreasing the number of ray-tracing effects, but the game never reached 60 fps for me.

Even so, I couldn’t bring myself to turn RTX off. It’s difficult to go back to normal graphics after experiencing ray tracing. The world looks dull in comparison.

But with that being said, I think Control goes a little overboard with all the red, which seems to be the Hiss’s signature color. Some areas are completely bathed in red light, making it hard to see anything. Some of the white light sources can be painfully harsh too.

Control has some faults, but it is still one of the best action games I’ve played this year. The insane plot alone makes it worthwhile. There are a couple of unexplained plot holes, but it’s clear that not everything about the game needs to be explained. Some things are simply unknowable. As the new director of the big house of weird, I’m surprisingly comfortable with that. 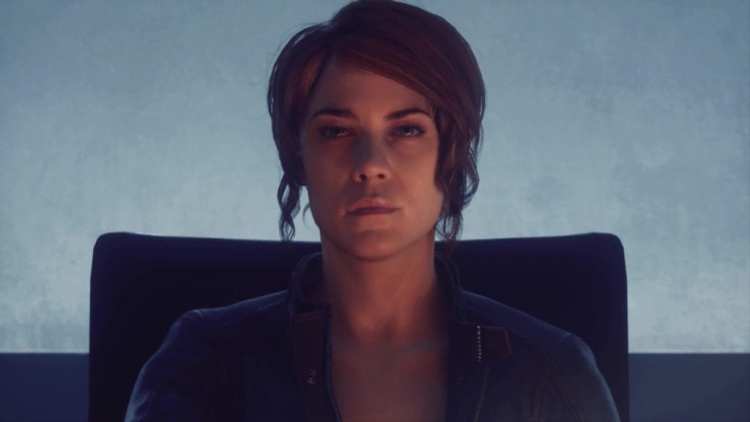 Control is a marvel both story-wise and technologically, with its extensive use of ray tracing technology. Although the gameplay has a few quirks, it's easily one of the best action games to release this year.