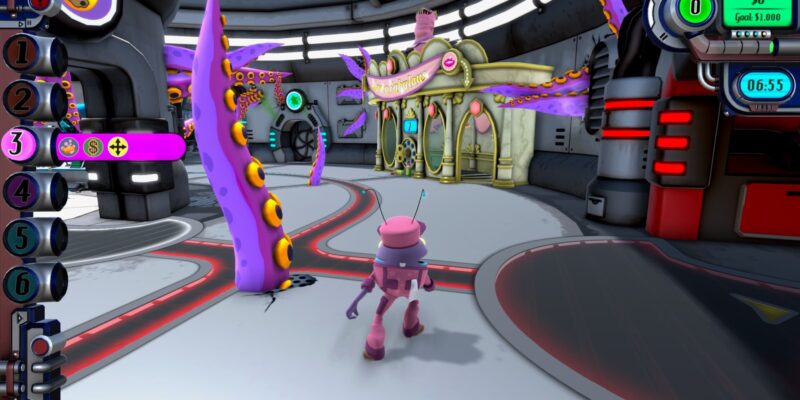 Food games have a stranglehold on the “serve multiple customers while juggling work duties” subgenre. Cook, Serve, Delicious!! is certainly the reigning king, and Cosmo’s Quickstop can be very reminiscent of it. But it’s zanier. Also, it’s 3D and you control a character while accomplishing tasks. Granted, it’s not the first game to do this, but this title actually has just as much, if not more, complexity than its brethren. Unfortunately, the game bites off more than it can chew. Things can get majorly confusing and a bit sloppy. But, this is a funny, tense multi-tasking sim oozing with character and actual ooze.

Hilariously, Cosmo’s Quickstop drops you in a gas station instead of a restaurant. Also, it’s in space. And all the characters are aliens. There’s actually a plot here, too. You play as Morvin, who works for his uncle Cosmo at his space gas station. Things are going well, but then, a bigger, fancier automated gas station moves in across the street. The proprietor ends up pretending to be friendly, before going out of their way to sabotage the Quickstop. Yes, that’s the plot of my favorite movie, Good Burger. And I’m quite tickled by that fact.

The writing is cute and consistently funny. The character designs, while very much within the typical cartoony space alien fare we’ve seen time and again, are still creative and lively. Playing the game and existing within its world is simply endearing. The gameplay premise is simple. Morvin has to see to the needs of each customer that parks and enters the Quickstop. No, there are no rude, poorly-trained clerks for you to work with. And you are always supposed to be there that day. But you cannot galvanize people’s tires while they wait. 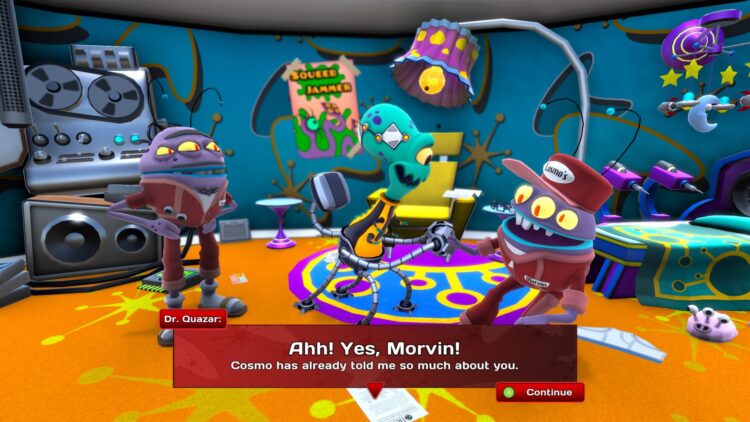 Yes, it’s safe. It’s very safe. At first, you can service four customers simultaneously in Cosmo’s Quickstop. Each docking station has two services, such as filling up fuel and having a machine wash cars. There are also special amenities within the station itself. To begin with, there’s just one of these, and these range from a coffee machine, showers, to even a fortune-telling machine. Then there are the only constant amenities that are offered: a vending machine and a restroom. Everything else gets worn out and needs to be swapped with something else, or it’ll need to undergo a day of maintenance.

The general game structure is that Cosmo will give you a checklist that you’ll need to complete. It includes using specific amenities, making a certain amount of money, gaining upgrade stars, and more. Once you hit every item on the list, you will do a boss mission. These can be shockingly difficult, but I’ll dive into that more in a bit. Every day has two levels of quotas you can hit. Hitting these regularly will reward you with upgrade stars that you can use to buy new perks for your amenities.

After you beat a boss level in Cosmo’s Quickstop, the joint itself adds two more service modules, allowing the game to get more complex over time. More amenities show up, too, so things can get quite hectic. Generally speaking, it’s not too hard to juggle the duties simultaneously. The different modules are in separate rooms, but they have warps that function as hallways that let you move from one to the next. This is funny because they could have just as easily used literal hallways. It’s like that joke in Spaceballs when Mel Brooks’ head ends up backward. But getting around only gets harder as the station grows in size. 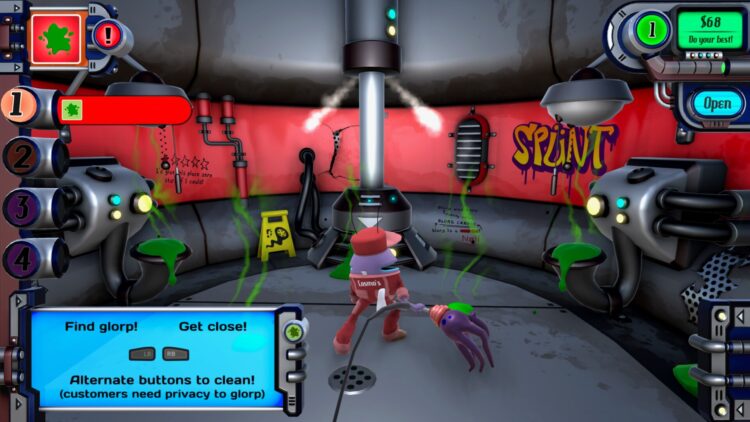 Where are you going?

Cosmo’s Quickstop is very entertaining to play, but there’s a reason most games of this nature don’t let you walk around a sizable play area. It can simply be confusing to know what’s what when you’re rushing to try and fulfill a task before customers leave. The vending machine needs to be filled, the bathroom needs to be cleaned, and special amenities have to be maintained. Unlike the service modules, it can be truly difficult to remember where things are located. I just didn’t know where the vending machine and bathroom were most of the time, so I had to walk around to find them while the clock ticked down.

There’s also a feature where you need to show certain customers to their destination on a map. But it’s sometimes quite hard to tell which customer is which. Customers are designated two to a color, but both can ask for directions at once, so I often got confused as to which customer I was assisting. And running out of time and having a customer run out on you is very bad, since you need to keep your combo high to hit your quotas. Just one screw-up can mean that you’ve screwed yourself for the day.

This is further complicated by the asteroids in Cosmo’s Quickstop. Sometimes random red lights will flash, meaning that you have to stop what you’re doing and move the Quickstop out of the way of incoming asteroids. If you input a single wrong button press, a customer will flee and your combo will be broken. These are typically pretty easy, but mistakes happen and asteroids can come at horrible times, giving you a choice between losing a customer due to time running out, or losing a customer due to asteroids. 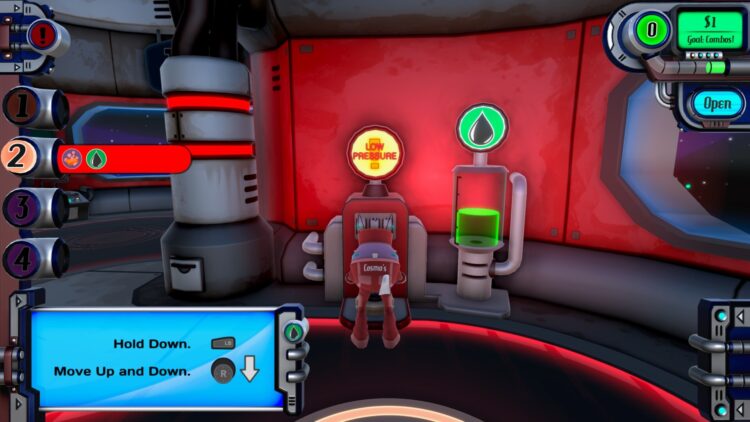 You’re standing on my neck

Then there are the boss missions. These, while a solid idea, are a bit of a giant pain. For instance, the second one randomly blocks most of the doorways and warps with tentacles. In order to pass it, the quota is also high. The thing was, when I got here, the quota was higher than I was even able to hit when my way wasn’t blocked constantly. I didn’t even have enough upgrade stars or leveled-up services to boost the earnings of my amenities either, so it was seemingly impossible for me to beat this level on the normal difficulty, nor could I grind for more stars and higher levels. I had to bump it down to easy. Even on easy, I couldn’t hit the dollar quota required by normal. Thankfully, the difficulty massively reduced the quotas as well, which allowed me to squeeze by.

Cosmo’s Quickstop is a good game, but it feels a little more complex and unwieldy than it comfortably should. I love these kinds of games, but it’s problematic when you run into trouble just because things feel confusing. I still think Cosmo’s Quickstop is worth a play, but its problems keep it from becoming one of the greats in this subgenre. It comes surprisingly close, but the confusion of the station’s layout mixed with how randomly unfair the mechanics can be make it a bit of a tougher sell overall. 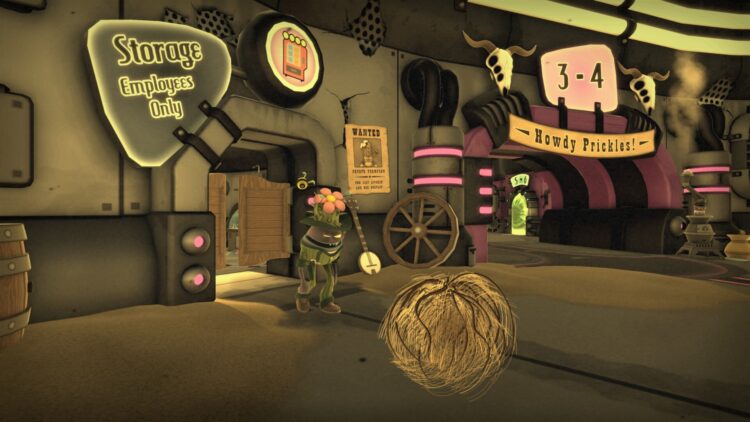 Zany and hectic, Cosmo's Quickstop has a lot to offer, but it's damaged some by needless confusion and a bit of unfairness here and there.

Twelve Minutes review — Time to revisit the past