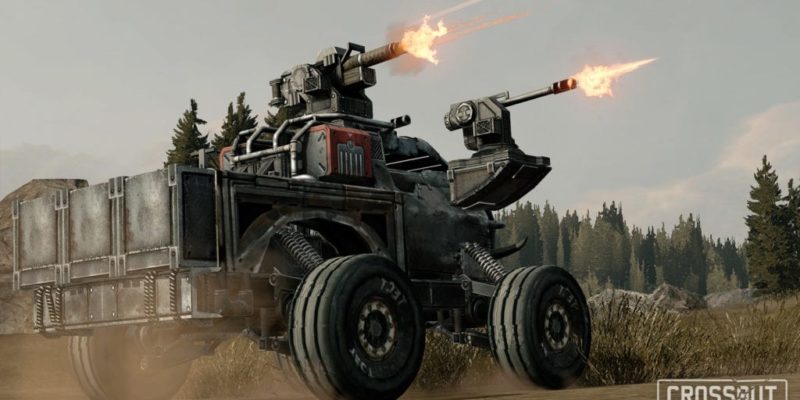 Gaijin hit Gamescom with two titles this year: their free-to-play War Thunder (which we all know about already) and a new game under development by Targem called Crossout. You may already know of Targem’s other title, the free-to-play space shooter Star Conflict, so we decided to take a look at Crossout to find out more about this upcoming vehicular combat game. 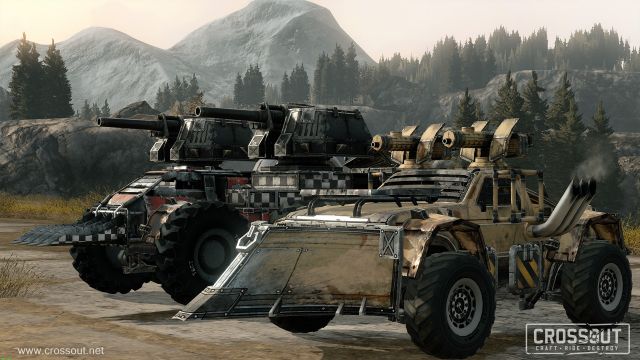 I’m getting some powerful Robot Wars vibes from these vehicles.

Starting out in a garage, players have to create weird and wonderful vehicles from various component parts. Vehicles are created with a frame, cabin and wheels, and then augmented with a variety of devastating weapons. There’s everything from guns to chainsaws to mess about with and it’s easy to come up with with some interesting looking vehicles by selecting parts from the menu screens. Perhaps blades on the wheels? Maybe sir would like that with a mounted gun turret, and perhaps a battering ram? Sounds great, but it’s up to the individual how their vehicle will look and perform.

The idea is to create a vehicle that will be able to withstand the rigours of combat against other players, all of whom will have also created their own mental militarised minibuses. Once a vehicle has been created, players can then take it into a test arena to see how it handles and try out the equipped weaponry. Inside the test area there are jumps to test handling and static targets to test the weapons. If something doesn’t feel right, you can simply head back into the garage and tweak the vehicle before taking it into a real combat environment.

Taking your newly created vehicle into combat for the first time feels daunting. You simply don’t know what you’re going to come up against, because every other vehicle you face off against is going to be unique. That said, looking at what other Crossout players have created is also part of the fun and should encourage you to try to emulate (or improve on) some of the more successful creations.

Targem has designed the game so that matches are fast and furious. Battles should last around 5-10 minutes, which will allow players to jump in and jump out of the game without a massive time investment. After a round or two of combat, you’ll probably head back to the garage to make further tweaks to your own vehicles, to make them perform better the next time you jump back in. It’s a learning process right from the start. 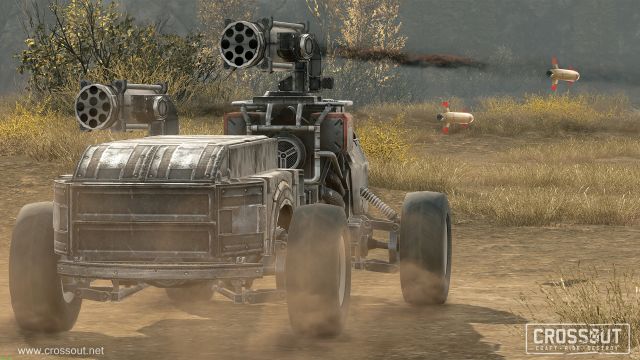 I wonder if firing missiles out of the back would act as a speed boost?

Getting the design right is essential because there are consequences to screwing up your creation. If, for example, you are in a battle and all your wheels are shot off, then you’re left completely immobile until the end of the round. There is no self destruct. This is probably why we were seeing vehicles with many, many wheels in the game we played – even if you only have three left you can hobble around the battle arena, so there were quite a few vehicles with 8+ wheels roaring around.

Control of the vehicles is as you’d expect, with a combination of mouse and WASD keys. In general the vehicles are quite maneuverable, but a lot depends on how you set the vehicle up in the first place… which, again, places emphasis on the garage building stage of the game. If you build something that’s not very maneuverable, you’ll be an easy target.

We watched numerous players try Crossout for the first time and there’s a definite appeal if you love to create something and then test it out. It may not appeal to everyone, though; you have to be prepared to put the time in during the garage building stage to have any success in battle. 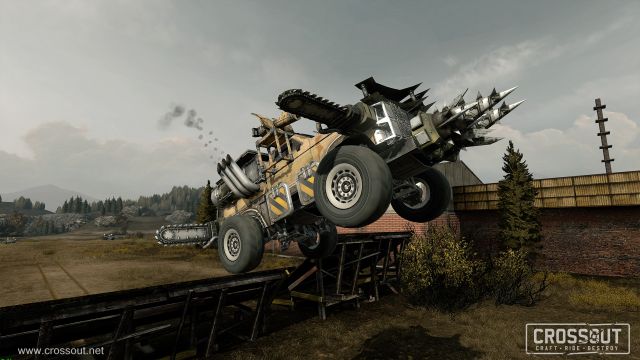 The demonstration  matches we played were 8v8 team games but there will likely be more modes once the game heads into the beta testing phase some time in the next few weeks.

Crossout will be free to play, but Targem and Gaijin are still working out what the best monetisation model will be for the game. There’s some talk of creating a player-driven economy where players can sell their creations, which would certainly be a more interesting model than simple micro-transactions on car parts, but we’ll have to wait and see how it all shakes out.

There aren’t many multiplayer vehicle combat games around (let alone ones where you create bizarre Frankenstein vehicles), so Crossout might just fill a unique niche in the market. We’ll have to see how it plays out once full-on testing begins, and a lot will depend on what business model they eventually settle on.