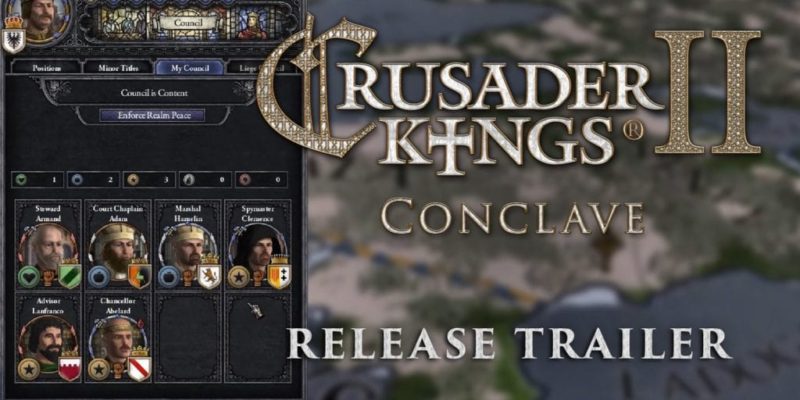 As is the norm for the release of a Crusader Kings 2 expansion (in this case Conclave, released today), the game has received a hefty free update as well.

In Conclave, you’ll be keeping an eye on your small council, making sure your darling children grow up right, and using your devious ways to spread chaos among any realms that aren’t your own. Meanwhile, back in the main Crusader Kings 2 “Getting killed by assassins no longer forces you to die twice.” So that’s nice.

Minor:
– Lieges of Trade Post owners will no longer burn mentioned Trade Posts
– Characters with unfaithful concubines will now gain proper opinion modifiers
– Halved frequency of Mu’tazila vassals asking lieges to change their beliefs- Council Appointment Offer from Liege no longer expires after a day
– Renegotiate Non-Aggression Pact interaction no longer appears if it’s disabled between characters or if one of them is landless
– Governments no longer allow to freely revoke titles from tribals of same faith
– Fixed so culture and names are updated properly for some provinces when picking between bookmarks
– Holy orders, adventurers and mercs can no longer start factions
– Fixed issues in Form Non-Aggression Pact interaction
– Fixed issues with Pact list not showing certain Non-Aggression Pacts
– Game no longer crash if continue button loads a save game outside a subfolder while player is in subfolder- Dead vassals don’t show up in the character selection screen anymore
– keyboard shortcuts in the character selection screen
– fixed a nasty oos possibility due to multithreading
– Children who were being educated but didn’t have a guardian now go back home when they turn adult
– Fixes Revolters going independant when revolt leader loses all land (the war becomes invalidated instead)- Fixed crash caused by dead guy refusing to leave his coalition against an infamous enemy
– Fixed console command that let’s you spawn in a sprite on the map.
– Speed up AI diplomacy evaluation by removing unnessecary debug code.
– Fixed so teenage hormones do not affect incapable characters, no longer gets their love event.
– Can now hide your daughter if someone is out to get her.
– Muslims unless they are sinful will no longer die from poisoned wine.
– Plot backers who are Muslim unless they are sinful will no longer get drunk and spill the beans.
– Fixed wife giving advice events from firing when councillors were not hired.
– Non-independent allies now share vision with other allies in a war.
– Incapable people are no longer capable of killing people.
– No longer makes council position buttons clickable if you are not on council.
– AI will no longer try to assign adviser titles to someone who already has it (which means it will actually be capable of assigning it now)
– The writers of the chronicle will no longer try to cover-up the warning of the coming of Xuhmalz, the demon lord, whom left a message set in stone.
– Getting killed by assassins no longer forces you to die twice.
– AI-rulers will now consider changing their obligation laws to better suit their needs.
– Councillors are now more prone to approve title grants to unlanded characters when you’re above demesne limit.
– The vote window is properly aligned with the interaction position
– The vote window won’t be shown when there’s no vote
– The tooltip for changing a law now shows what the members of the council stand on the issue
– Fixed crash when a character dies and disbands armies that ends as combat that the player is part of
– Favor duration increased from 12 to 36 months
– Increased the chance from 25% to 75% for the AI using favors to force interactions
– No longer possible to call a favor on someone already under the influence of a favor
– Council voter list aligned

Converter:
– Fixed error with province Hoya in converter
– Fixed graphical culture for south indians
– Hansa no longer becomes Lübeck
– Native americans are no longer anatolian beyliks in the converter
– Dravidian nations no longer need to be two religions at once to get their idea set in the converter
– Pictish is no longer forever alone in Celtic group, they joined the Gaelic club
– Andalucian nations should now get their Granadan ideas
– EU4 now properly recognize the Jews as a culture and do not say Jewish empires do not exist.
– Mamelukes ideas should now be applied properly
– Lappish now properly becomes Sapmi culture
– Added a bunch of new nation tags to the converter and fixed some out dated ones
– Fixed new way to generate governments for the converter if you have conclave