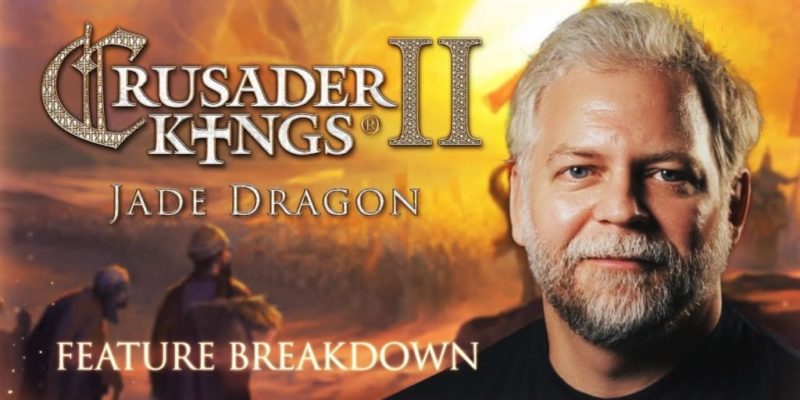 Paradox’s Henrik Fahraeus is fronting another Crusader Kings 2 video, this time providing an overview of the Jade Dragon DLC. The latest expansion comes out later in 2017, and will cost $15 USD.

As you may have ascertained, it’s going to focus on China and the surrounding regions. The primary draw will be interaction with the Chinese Emperor. A new screen shows you who the current ruler of China is, their interests, and current policies. When the country is Open, it means trade will be flowing down the Silk Road. But in Jade Dragon, China may also be Isolationist, or Expansionist (in which case you may have to beware of an attack).

Another factor in Jade Dragon is current events within China. This could be a ‘Golden Age’ or even a Civil War. All of which affects the concept of ‘Grace’; representing whether you are in the Emperor’s good graces (or not). You can gain favour (Grace) by giving gifts. Once you have his ear, you can request things like specialists. Or, at the very top end, an invasion of one of your rivals.

Speaking of invasions, China may decide to attack the West. Not necessarily through the Emperor himself, but via a rogue Prince or remnants of a Civil War faction. If you’re really unfortunate, though, there will be a full scale invasion.

Further cosmetic additions and mechanical changes are discussed in the video, below. Free additions include a playable Tibet, and improvements to the Silk Road. Plus a free Casus Belli under the title ‘Free Captives’ (for when those pesky Vikings steal your spouse).