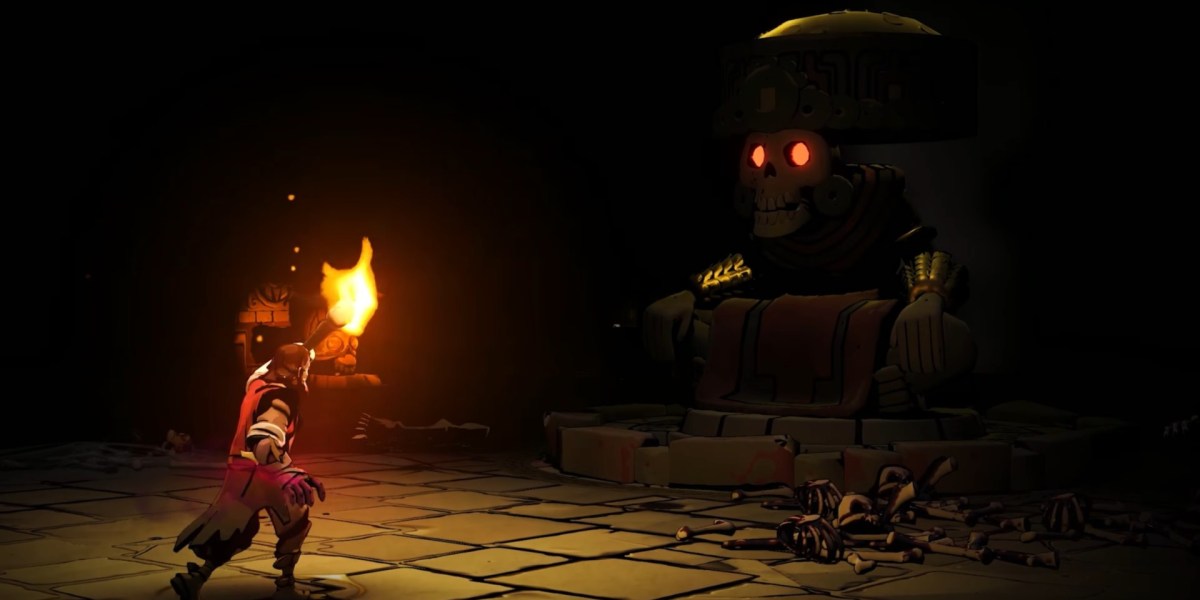 Curse of the Dead Gods, an action roguelike from Passtech Games and Focus Home Interactive, has been part of Steam’s Early Access program for almost a year. Though I’ve only played it recently, I easily noticed similarities with Hades. Supergiant’s offering happens to be something I consider as the pinnacle of games in the action roguelike genre.

As such, I went in to Curse of the Dead Gods with an open mind, keen to see if it is worthwhile. There are several features and mechanics that make it unique. Unfortunately, it also has a number of flaws that can’t be ignored.

In Curse of the Dead Gods, you play as some generic adventurer fella named Caradog McCallister. Mind you, I don’t even recall his name being mentioned in-game (I just found it on the wiki). That’s the first flaw: the game has absolutely no story, at least not one that kept me engaged.

Given that it’s a single-player title, I didn’t feel invested in Caradog’s journey, motivations, or why he’s delving into dungeons in the first place. I don’t even remember any semblance of voice acting outside of character grunts and enemy shrieks. 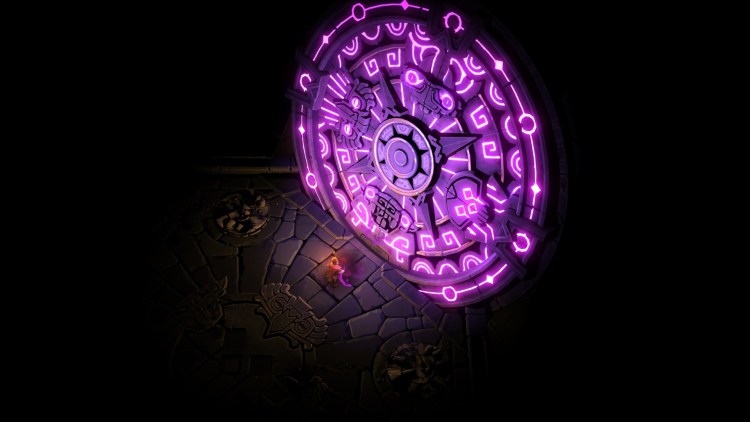 Curse of the Dead Gods has three temples, each one with its own themes, traps, regular enemy mobs, and boss encounters. Level design is wonderful, and you’ll notice an emphasis on Mesoamerican culture as you progress. The enemies and boss encounters are also well crafted, but a bit too limited.

As for the Hades similarity I mentioned earlier, it pertains to the room-to-room clearing, with specific rooms providing particular buffs. The key difference in Curse of the Dead Gods is that a temple’s layout is readily seen. You can plan ahead and strategize, choosing which rewards you want to focus on. You can find new weapons, weapon upgrades, attribute boosts, relics, gold, health fountains, and even a challenge or two. Likewise, there are several unique mechanics presented. One example is light versus darkness, where you can use a torch to see traps or light braziers. However, a room that’s shrouded in darkness will cause you to take more damage. 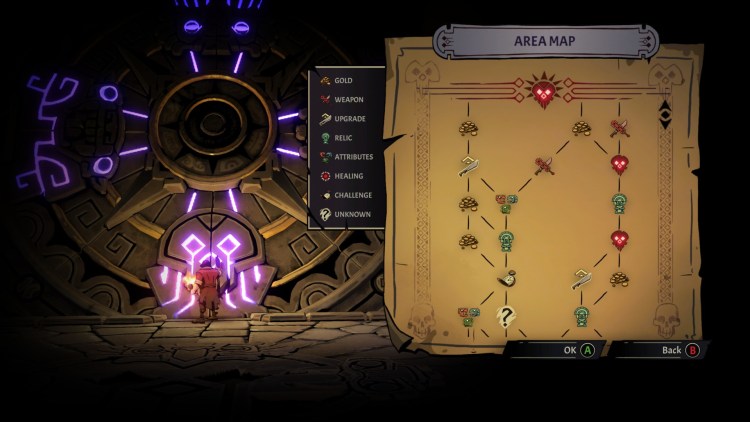 Another mechanic that you’ll need to master early on is corruption. This builds up if you sacrifice to earn a reward, if you get hit by certain enemy attacks, or whenever you enter a new room. Upon hitting 100 points, you’ll get afflicted by a random curse. Some of these are negligible (such as traps activating automatically), and one can even be used for a specific build (your torch can no longer light braziers, but you don’t take extra damage while in the dark). However, there are a select few that can be truly detrimental, such as corruption that slowly builds over time.

With how the mechanic is implemented, there’s a possibility that you’ll hit the fifth curse. This one’s no longer random, as it simply causes your health to drop until only one HP remains. Assuming you can’t find a means of lowering your corruption (i.e., relics or weapon perks), then you’ll find yourself at the mercy of RNG. 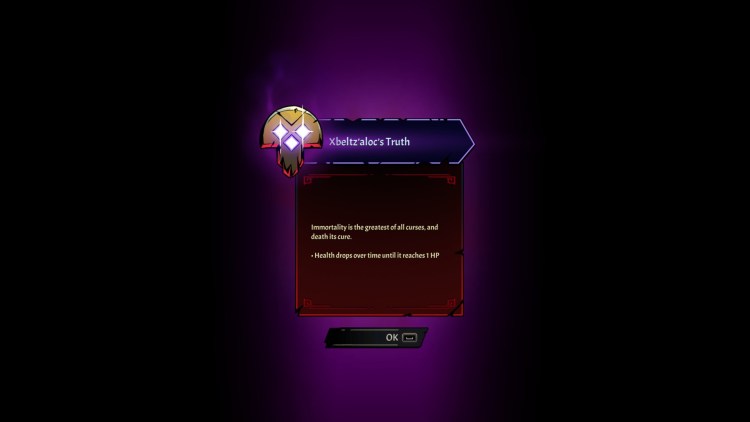 In terms of battling opponents, Curse of the Dead Gods has one of the most enjoyable combat systems I’ve experienced. It’s extremely skill based, with a steep learning curve that prioritizes high-risk, high-reward actions. Think of it as akin to Dark Souls and other Souls-like games given that you use your stamina to dodge and parry attacks. Time these right, and you’ll regenerate stamina (or in the case of parries, you’ll also stun enemies). Likewise, slashing, dicing, and smashing foes can be very satisfying due to the weight and impact of attacks. There’s even the “greed kills” mechanic, where chaining kills back to back without getting hit allows you to earn more gold.

The game’s weapon system is used in conjunction with the torch (the light versus dark mechanic I detailed above). There are keybinds for the torch, a main-hand plus off-hand/secondary weapon combo, and another for a two-handed weapon. You can freely switch on the fly and, outside of two-handers, you can even dodge or parry to cancel attack animations. Just be sure to use a controller, since the mouse and keyboard setup is hard to get used to. 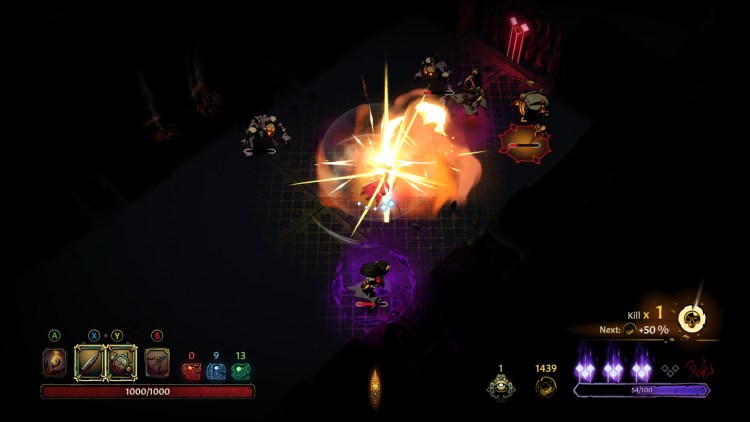 A major gripe I do have, though, is with Curse of the Dead Gods‘ weapon pool. Although weapons have different charged attacks and capabilities, very few were worthwhile to use. For instance, I primarily completed my runs using a one-handed sword and shield combo. The sword didn’t use up stamina whenever I landed a finisher, and the shield had a chance of executing a parry automatically. The only substitute I used for the sword was a mace that offered increased damage per second depending on the level of relics I’d obtained.

Other than these, I never really found much use for the other types of armaments. In some ways, I felt held back if I wasn’t choosing something that could be stacked with an attribute, relic perk, or heal-on-kill/heal-on-critical effects. Furthermore, many cursed weapons just became too cumbersome to wield due to certain affixes they could end up with. 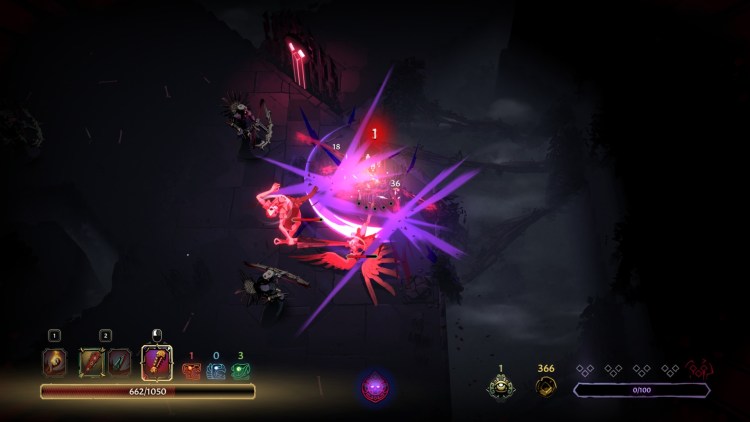 Curse of the Dead Gods‘ progression

After finishing a dungeon run (or failing one), you’ll lose all your gold and boosted attributes. However, you’ll retain resources that let you unlock permanent perks and discoverable weapon types. You may also obtain altars that offer a selection of gear and “divine favors” (rerolls in case you want a different reward).

In essence, Curse of the Dead Gods follows the core gameplay loop that the action roguelike genre is known for. You enter a dungeon, get killed, earn some upgrades, and then get beat up some more. You lather, rinse, and repeat all of these until you eventually triumph. The biggest downside, however, is that there’s not much else to look forward to. 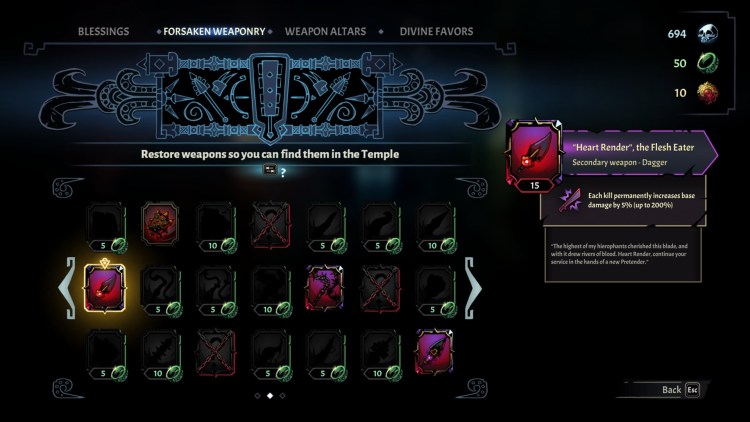 Your first few romps in Curse of the Dead Gods will be against enemies in a temple with roughly seven rooms. There might be multiple fights in each room, mind you. These will culminate in a champion encounter. Later, each temple gets a second champion (with a total of 14 rooms). After that, the third tier features that temple’s avatar plus its two champions (with 21 rooms). That’s just for a single type of temple, and you’re likely to get bored with facing the same mobs throughout your runs in the other two.

Eventually, you’ll unlock the final temple where the boss resides. There are three sections here (a total of 24 rooms this time). This run has champions and avatars that can be fought, as well as a “mixed roster” of opponents (mobs from various temples can appear). Although I managed to defeat the final boss, the next part just had the same old temple delves. The only thing that changed was the difficulty spike: tougher enemies, fewer healing fountains, and increased damage taken. By that point, I was already tired.

I genuinely don’t mind challenging action roguelike games. Unfortunately, Curse of the Dead Gods didn’t scratch the itch the same way that Hades did. It seems that a lot of development time was spent on crafting perfect dodges and parries (which is fine), and too little on content, pacing, and structure. Neither the story nor the character was interesting, and the bestiary was very limited. There also wasn’t a lot to go by when it came to experimentation and customization. It led to a cycle that became too redundant and repetitive, compounded by an over-reliance on RNG curses. In the end, I couldn’t help but realize that I was just going through the motions. At the very least, the combat was excellent. 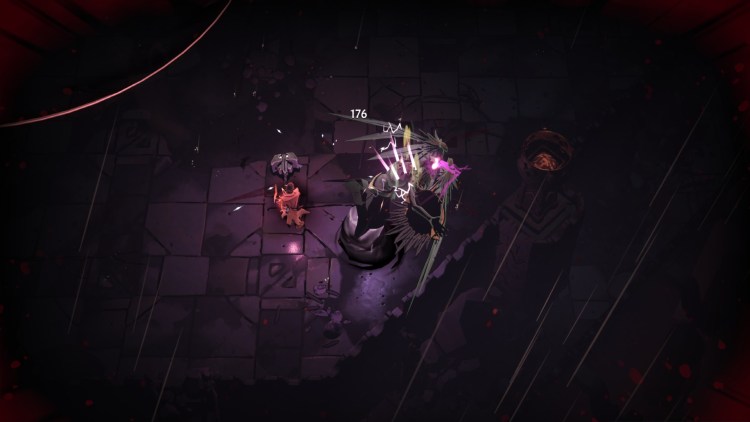 Curse of the Dead Gods

An action roguelike where you explore temples to strike down corrupted denizens.
7

Curse of the Dead Gods' combat system is extremely rewarding, and the challenge will keep you on your toes. Unfortunately, it lacks a lot in terms of content and it can be repetitive within a few hours. It's worth playing in bursts, but it doesn't have enough to satisfy long-term engagement.

Curse of the Dead Gods — Beginner’s guide and general tips

By Jason Rodriguez17 hours ago
Reviews