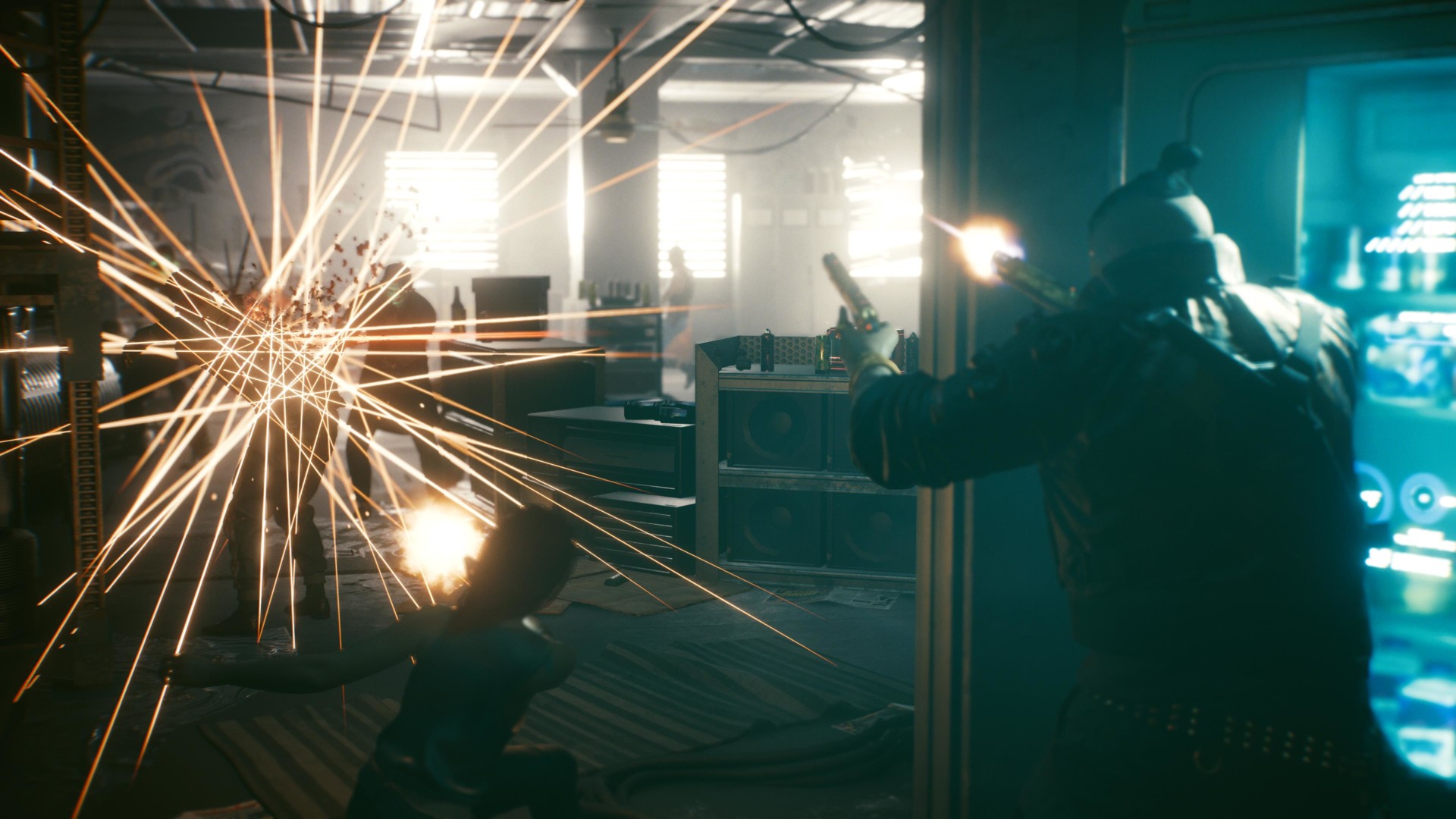 One of the most integral mechanics in Cyberpunk 2077 is hacking. After all, you’re in a dystopian future where everyone’s interconnected and is living the life of a cyborg. Here’s our guide to help you with the Breach Protocol minigame and Quickhacking skills.

There are two ways you can hack systems in Cyberpunk 2077: Breach Protocol and Quickhacking. Think of Breach Protocol as having a bigger effect (usually targeting multiple hostiles or objects in a room).

However, this minigame does require you to find an access point nearby or an “online” target that’s connected to a network.  If there’s one, you can “jack in” and start the minigame itself.

Note: Both Breach Protocol and Quickhacks are governed by the Intelligence attribute, so you’ll get more boosts and perks if you focus on this. 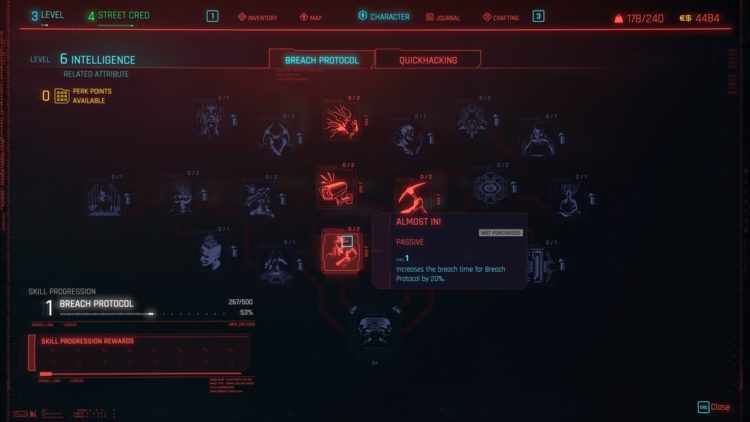 Note: In a few cases, you can attempt to hack the network once more, but you’ll have less time to complete the sequence. Most of the time, though, failure will get you locked out of the system. 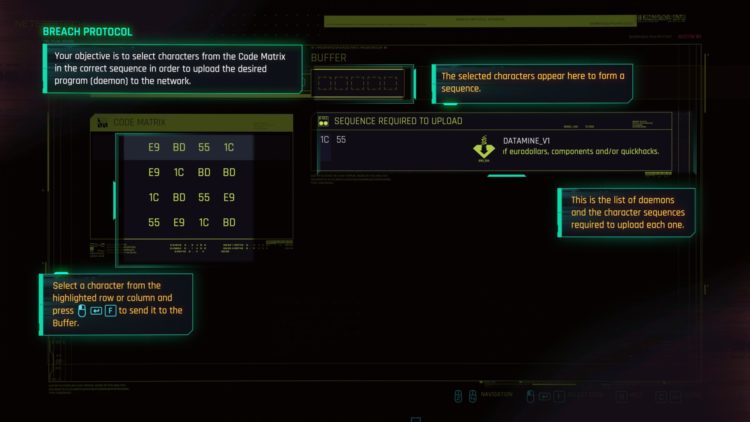 If you look at the above example, the sequence we need to complete is “1C -> 55.” That sounds easy enough, right? But, it can be a little confusing due to how Cyberpunk 2077‘s Breach Protocol minigame works.

When you start a Breach Protocol, only the top row is available. Then, whenever you highlight a selection, you’ll notice a yellow outline. This shows you the row or column that will be unlocked next, often alternating.

You can only select an alphanumeric combination from the row/column that’s unlocked. As such, it’s not as simple as clicking on a random “1C” and “55” in the code matrix section. 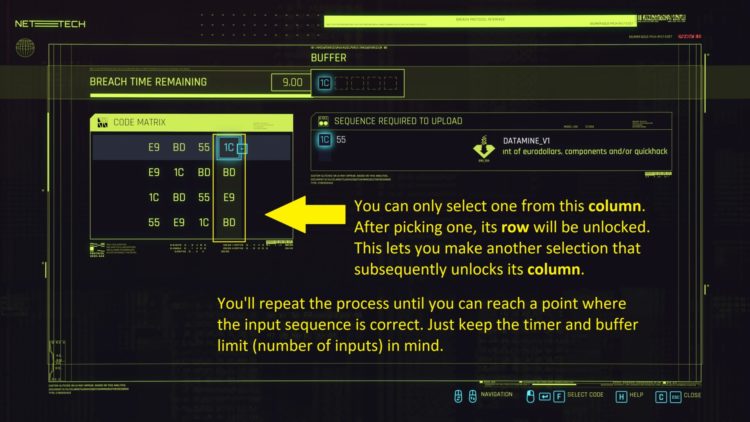 You’ll actually need to pick the correct ones in a row/column, bearing in mind what gets unlocked per selection.

It gets tougher later on since some would require five or more inputs in a code sequence. 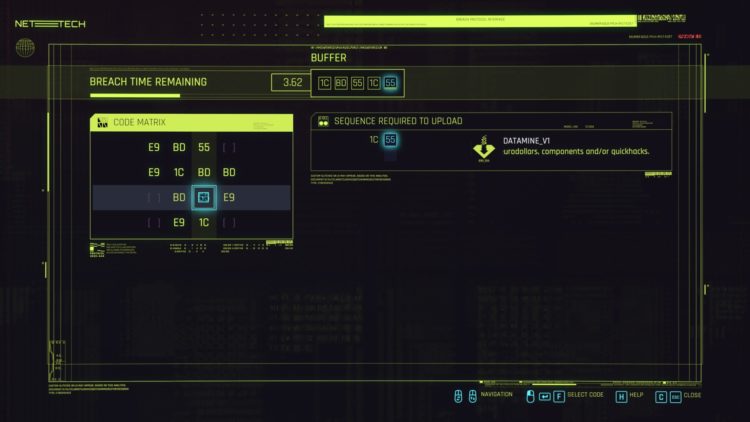 Quickhacking, as the term denotes, is a speedy way of sabotaging enemy tech and objects in Cyberpunk 2077. You’ll be able to use these skills if you’re scanning an area by holding the tab key and highlighting an enemy or object. Several options will then appear along with their effects.

Examples for enemies include “Reboot Optics” (causes blindness) and “Short Circuit” (temporary stun). There are also more damaging ones that force an enemy to commit suicide or blow up their pals. 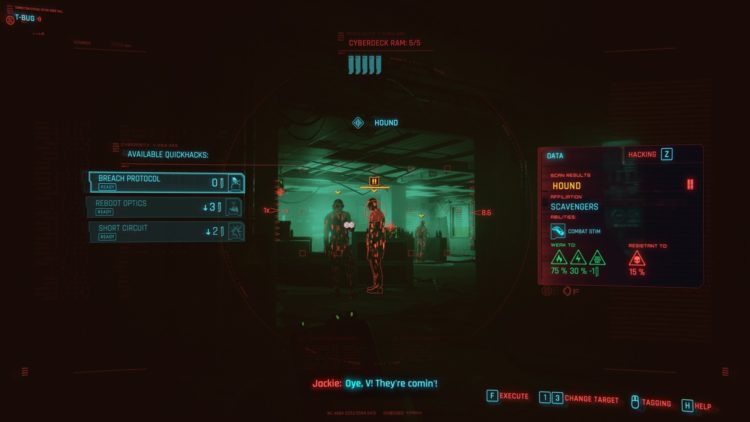 As for objects, some could be used to distract enemies (i.e., radios that start blaring tunes or floodlights that suddenly turn on). Others, meanwhile, could help with navigation (i.e., hacking security cameras to show all hostiles or new access points).

Just remember that Quickhacks require RAM. Think of this as Cyberpunk 2077‘s “mana/MP,” a resource that recharges over time. If you have enough, you can cause a lot of destruction before your foes even know what hit them. If you lack RAM, well, you’ll need to obtain some gear pieces or upgrade your Intelligence attribute (and obtain perks) that can increase the resource. 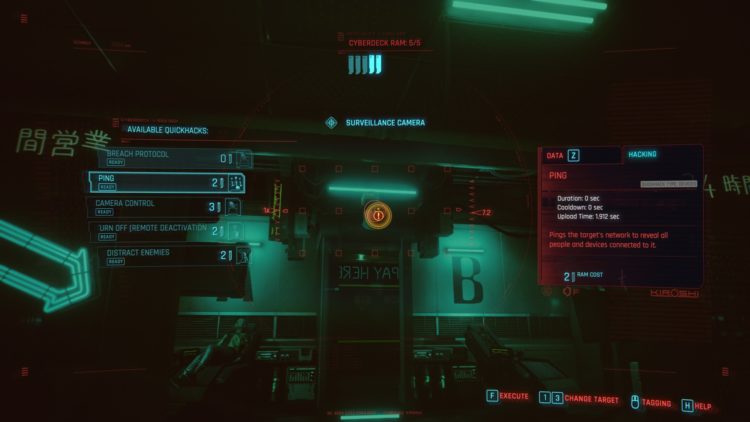 Furthermore, Netrunner vendors let you purchase hacking components and daemons that can be uploaded. These will certainly help you succeed further when it comes to Cyberpunk 2077‘s hacking mechanics.

Lastly, don’t forget that enemy Netrunners can also hack you. V, your main character, has loads of cybernetic implants making him/her prone to getting hacked if you’re not careful. 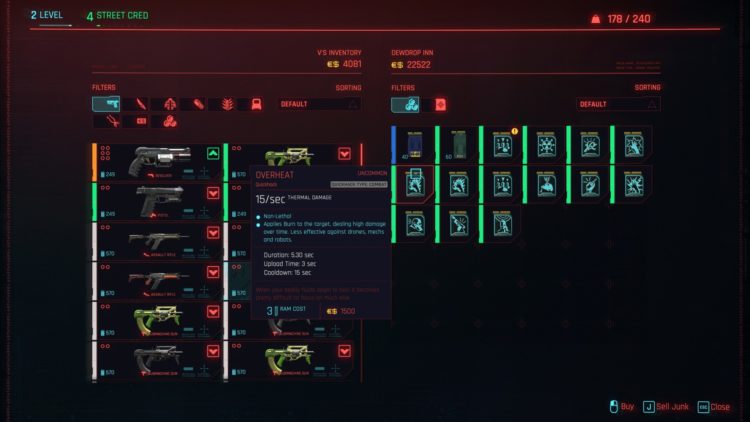