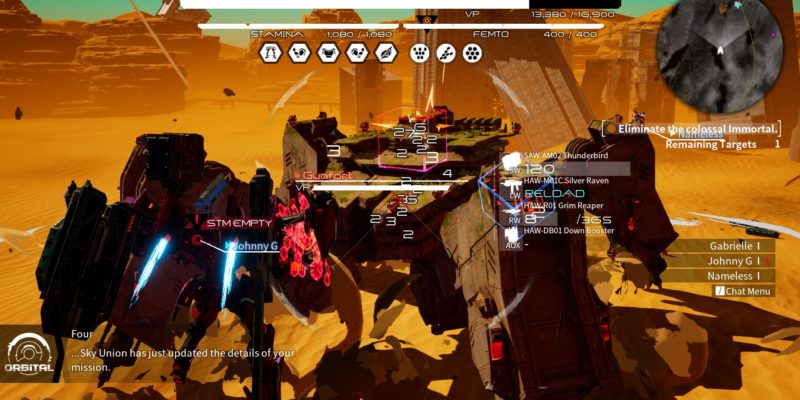 The marketplace used to be flooded with Japanese mecha games. For a while, you couldn’t blink without seeing a new Gundam or Armored Core game based around outfitting a mech with new parts and taking it on a mission. Nowadays, though, we don’t see them all too often. Daemon X Machina was originally released in September of last year exclusively on the Nintendo Switch. As a fan of the subgenre, that annoyed me.

Luckily, though, just like with Travis Strikes Again: No More Heroes, XSEED and Marvelous Inc. have seen fit to once again port a Switch game. Thankfully, this time it’s also a better game with a really solid port to boot. While the story might get pretty annoying and there’s a distinct lack of originality on display, Daemon X Machina is a fast, fun mecha game that will likely please anyone looking for a bit of a throwback.

Who are all these people?

Daemon X Machina is not up front about what exactly is going on with its story or why anyone should care. It begins by showing a moon colliding with a planet and thrusts you into a post-apocalyptic scenario dominated by archetypes with tons of different hair colors. The moon has fallen and brought with it corruption that turns certain AIs against humanity. The game takes place in a region known as the Oval that is rich with femto, a material carried in chunks of the moon. 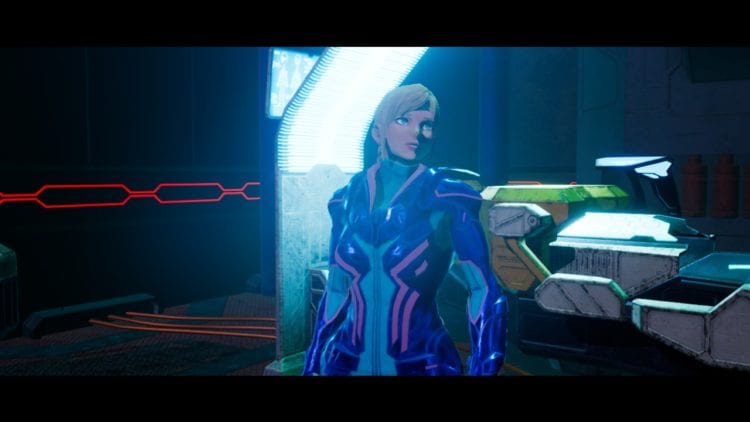 I didn’t even intend to make Samus, honest. I’m just insanely unoriginal like that.

You create a character who is immediately thrust into combat operations with a large roster of mercenaries. These mercenaries work for several different outfits. These outfits are not established beforehand, nor are most of the characters introduced. The game just kind of doesn’t care if you know what’s going on or not. On top of that, organizations are fighting over control of the Oval, adding vague factions to the smaller, less vague factions.

It’s all a bit of a mess, if that isn’t already clear. The plot does kind of come together later on, but every story section starts with minutes of the characters chattering at each other before you go into another mission and, surprise, you have to fight another team of three mercenaries while listening to the characters be stunned that the thing that’s happened a dozen times happened again. Thankfully, the gameplay is much, much better.

Daemon X Machina‘s modes are divided into story missions that advance the plot, free missions that don’t, randomly generated exploration missions that can be played online, unique co-op missions, and PVP. Completing missions rewards you with currency and various other items. You can spend the currency on buying or developing new weapons and armor for your mech or on cybernetic upgrades to your character that alter their appearance. For instance, giving them increased on-foot lock-on will permanently make their irises glow. You can also buy ice cream. 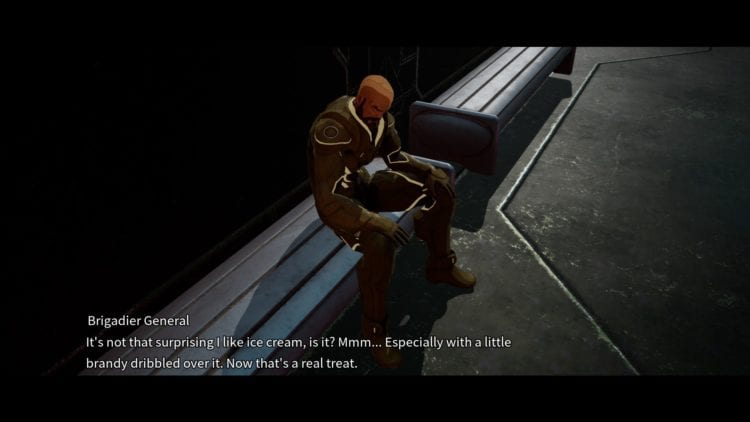 This happened after the character he was talking to got up and walked away. He spent like a minute talking about ice cream for some reason.

Gameplay primarily takes place in your mech, but if it gets downed, your character can then run around on foot, to limited effect. A later-game upgrade allows you to repair it in the field, but otherwise, you’re better off retrying. Not that the game is typically difficult enough to cause you to die. There’s only one difficulty setting and it’s rather easy. That coupled with how you’ll get perfectly decent parts even early on means that Daemon X Machina isn’t likely to challenge most players for the majority of the experience.

Each armor part looks different and can be mixed and matched however you like. You can also change the color of individual parts or add decals. But the mech designs aren’t particularly unique or memorable-looking. They look like generic mechs that you can see in any middling CGI-based mecha anime.

The gameplay in Daemon X Machina is quite good, though. You can equip your mech, or Arsenal as the game calls them, with ranged or melee weapons. The ranged weapons are much more useful, though, and I rarely used melee. You can also equip shields, which are similarly unnecessary in most circumstances. The game is very much based around boosting as much as you can. And boy, is it fast. Not quite as fast as Project Nimbus, mind you, but this one feels like more of a mech game and less of a dogfighting game with mechs than that one does. 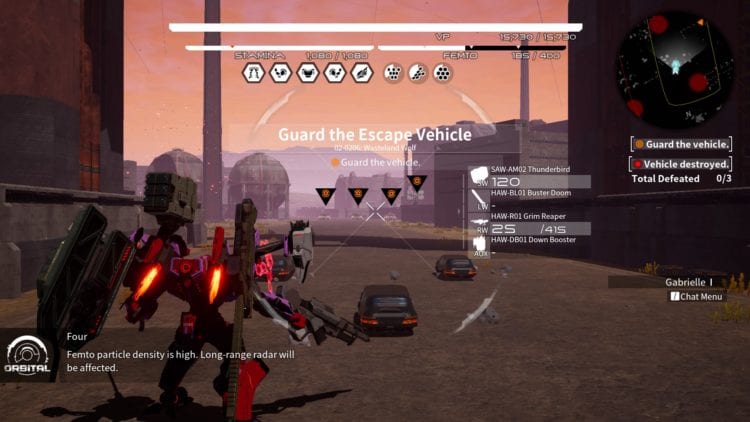 Defense missions aren’t too common, but the variety of mission types did kind of surprise me.

The movement is very fluid. You can aim, but whether your shots hit is based on a lock-on system rather than accuracy. Different weapons have different lock-on ranges, and an assortment of attachments can further increase your lock-on range and various attributes. There are a few different weapon types. Assault rifles, machine guns, lasers, bazookas, missiles, and cannons make up the bulk of the available weaponry. There’s also the blitz weapon, which strongly resembles the Newtype bits from Mobile Suit Gundam.

The weapons feel fairly satisfying to use, and rapidly zooming around the battlefield whilst letting loose a volley on everything around you is enjoyable. There are also containers on the battlefield that will create a healing zone that repairs any damage your mech has received. Some zones refill your femto meter, which allows you to use the mirage ability that creates a decoy and allows you to do large amounts of damage as well. Plus, certain weapons use femto in addition to regular ammunition.

You equip a weapon on each of your mech’s arms, plus two spares you can place on its back and switch to if the need arises. There are also weapons you can mount on the shoulder, plus an auxiliary space that can be used for a variety of equipment types. I preferred to keep a downward thruster on this spot, as I liked being able to adjust my altitude more easily. Otherwise, you just kind of have to turn your thrusters off and fall out of the sky. 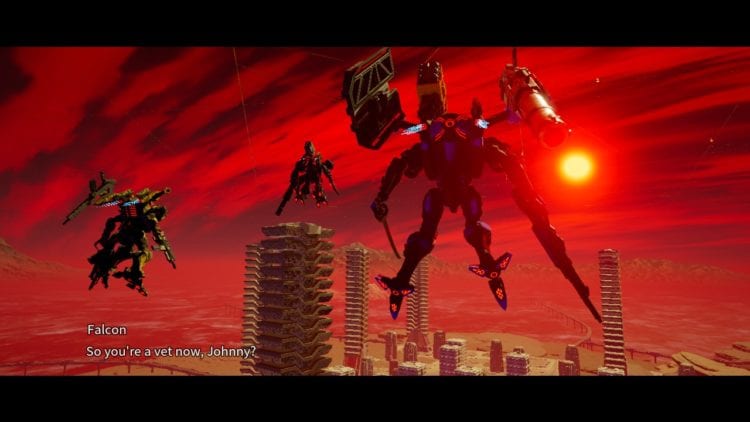 There isn’t a lot of enemy variety in Daemon X Machina, but it gets the job done. Enemy units are divided by the smaller AIs that inhabit things like tanks and helicopters or corrupted Arsenals, large AIs that function as special boss battles, and teams of other mercenaries. The non-arsenal AIs are total pushovers that mostly just exist as cannon fodder. But fighting Arsenals is where most of the fun is. They’re just as fast as you are, so you need to constantly be on the move while facing them.

This leads to fast-paced hit-and-run attacks as you try to take them down. I’m unable to try the PVP matches, as the game has yet to be released at the time of writing, but I’m looking forward to trying it out and seeing how the gameplay handles itself with nothing but humans. When you down Arsenals, you have the option of salvaging a single piece of equipment they were carrying. In turn, salvaged parts can be used to construct new ones in the factory.

I’m very pleased with the overall quality of Daemon X Machina‘s port. It has all the standard features, plus you can set the frame rate as high as 200 in the menu. The graphical options are a bit bare, but since this was a game developed for the Nintendo Switch, that is far from a surprise. For me, the game ran flawlessly and will likely do the same for most, even on lesser hardware. 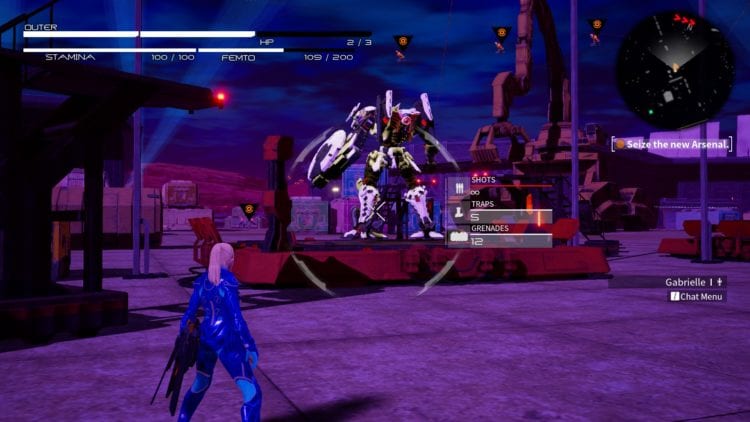 There are occasional on-foot missions too. You’re stealing a mech in this one, which is a little rad.

My favorite thing about having the game on PC, though, is being able to use a mouse and keyboard. This is one of those games that benefit greatly from having significantly higher camera movement accuracy. Playing it with a controller feels haphazard and sluggish by comparison. That being said, it’s still good with a controller, but a mouse is the way to go.

I just wish a bit more had been done with the visuals. The game is mostly just bland, with some flat environments and boring design for most things. The character models are also very dated and light hits their faces strangely during the game’s many cutscenes. It’s kind of like the light can’t properly cover faces, which leads to distracting banding and splotches. Environmental detail is also rather low, with unimpressive textures and some surprisingly poor foliage too.

Ghost in the ruins

Daemon X Machina isn’t an insanely long game by any means. Doing the main campaign and side missions will likely take around 15 hours or so, depending on how much you do. But with all of the online content, it’s a pretty good bang for your buck. The game can get a bit repetitive, sure, but there’s also a decent variety of mission types, such as ones that have you move around on foot, pilot giant mechs, or shoot down meteors to protect some towers. The story grates and can be nigh incomprehensible at times and it’s very dated visually, but if you’re looking for a fun Japanese mecha game, this is very much one of the better choices available. 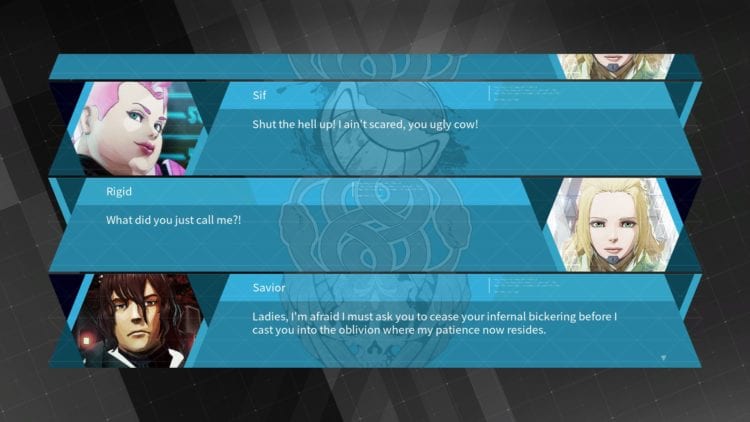 Pictured: Savior summing up my thoughts on this game’s dialogue.

Daemon X Machina doesn't break much new ground, but the gameplay is entertaining and anyone looking for an enjoyable piece of Japanese mecha will find plenty to like here. As long as they don't get completely turned off by the subpar story and dated graphics, at least.