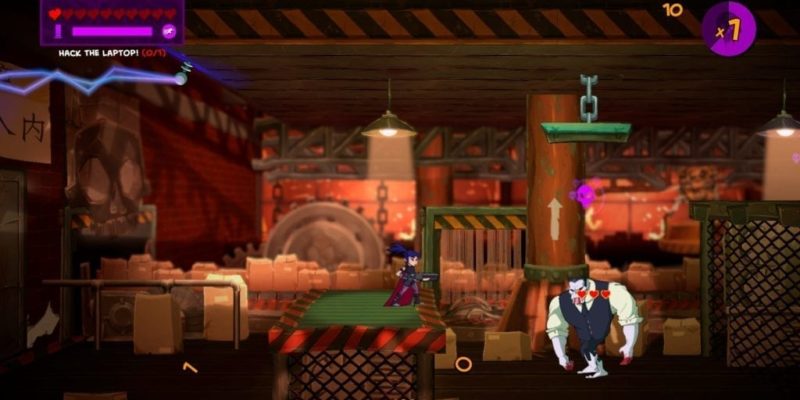 Early Access can really be a wonderful thing. It allows developers to take their time and incorporate fan feedback into their games. By the time release rolls around, players can be met with a complete, thoroughly-tested experience that was worth the wait. However, while Damsel is leaving Early Access today, it sadly doesn’t feel like a finished product.

Damsel‘s core concept is a fun one. You play as a vampire hunter named, you guessed it, Damsel. She goes into levels and kills vampires, rescues hostages, and hacks computers, among other things. Design-wise, the game is meant to be an arcade-esque experience, with a focus on score-chasing at the forefront.

Visually, Damsel is beautiful to look at. The game is very colorful, with good sprite work and detailed, cartoony 3D backgrounds. The vampires all burn up a la Buffy the Vampire Slayer whenever you kill one, and there’s a host of cool visual design elements on display. The campaign mode also has some decent-looking comic book pages at the start of each level. 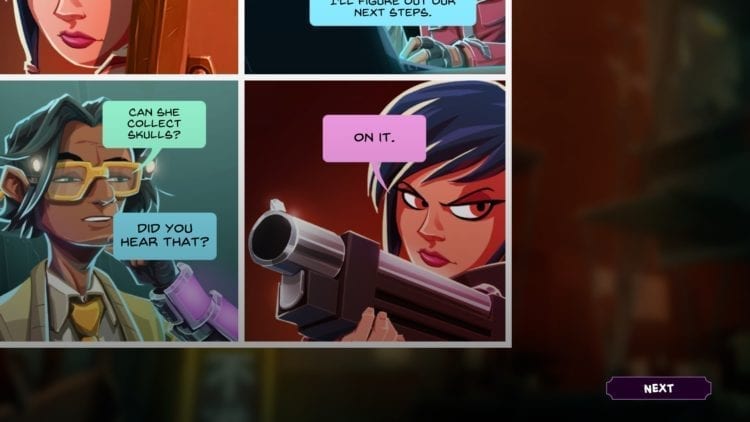 So much talking but practically no plot.

Speaking of those, the story might as well not exist. The events depicted in the comic pages hardly ever seem to correlate with the levels themselves. They really add nothing to the overall experience other than going, “Yes, this is a story mode.” The pages are filled with bland dialogue and practically no actual story, which resulted in me going through them as quickly as I could.

There are currently two modes of play in Damsel: the campaign mode and the arcade mode. The campaign mode drops you into a set of 25 levels in which you have to do one objective several times. Generally, that means killing all of the vampires, rescuing all the hostages, or clearing all the minigame tasks, such as the aforementioned hacking. Arcade mode, on the other hand, only tasks you with collecting all of the skull items littered around a level.

Gameplay-wise, Damsel is also a mixed bag. Damsel is armed with a gun and a melee attack that works when right next to an enemy. She can also double jump and dash. The shooting feels okay, but you can only fire three shots at a time before your energy bar has to recharge. This really makes the combat feel like a chore. I can’t tell you how many times I was fighting to stay alive, only to not have the ability to shoot when I needed it. The dash is okay and also has to recharge when overused, which is more acceptable than what the gun does. 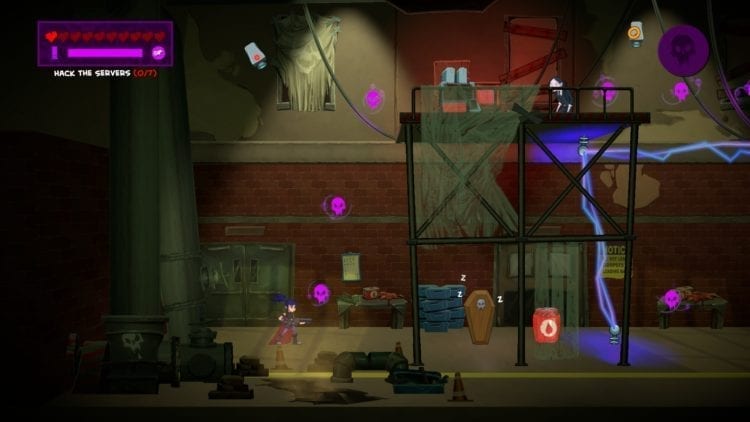 Blood barrels give you an extra hit.

Damsel Is Held Back By Sluggish Movement

Obnoxiously, Damsel starts each level with just a single hit point. You can get more by melee attacking blood barrels, but if you happen to take a hit before you get to one, you’re going to have to restart. This was a very poor choice. If she started with two or three hit points, it’d be okay, but just one can make the game an even bigger chore. Later levels introduce a similar-looking, explosive red barrel. I had to blow myself up a few times to even realize they were different.

An even bigger problem is the jumping and speed at which Damsel moves. The jumping is simply less responsive than it needs to be. There were plenty of times where I pressed the jump button, only for Damsel not to jump at all, or for the jump to be delayed and mess up my timing. Damsel also just feels sluggish. Getting her to do exactly what you want can be a real pain between how slow she is, how unresponsive the jump is, and how stupidly limited her gun is.

Unfortunately, the level design makes matters worse. There are far too few levels, and they’re re-used ad nauseam. The enemy placement and goal may be different, but the levels are the same. Enemies, items, and objective placements also feel extremely haphazard and lacking. The flow of the level design seems missing-in-action, and it often feels like elements were just dropped in willy-nilly. 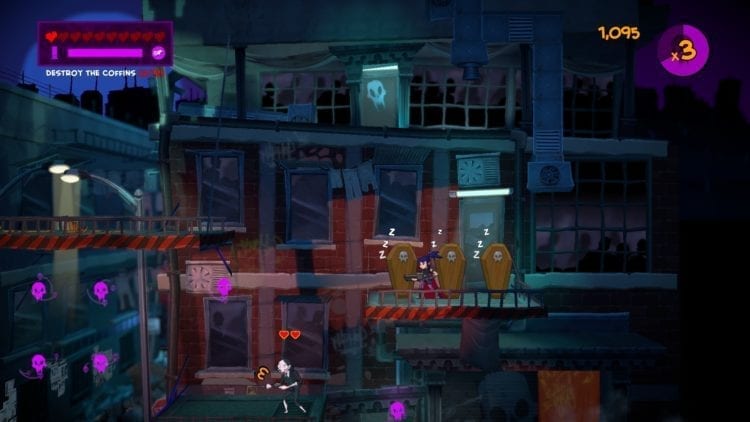 Coffin up a lung.

A few near-constant examples of these design errors come to mind. Your bullets can hit hostages too, and if one of them dies, it’s game over. If that doesn’t sound annoying enough, there are tons of times where I’d attack an enemy as they were blocking me from seeing the hostage. This often resulted in me accidentally killing the hostage. At times, foreground elements also block enemies and hostages from sight.

On top of that, enemies can shoot you from offscreen, and many of them have a very long range. I would frequently be trying to accomplish my mission, only to get hit by a bullet I couldn’t have seen coming. And when Damsel gets it, she goes flying. It’s aggravating to be about to complete the last objective of a timed stage, only to get hit from offscreen and knocked all the way down to ground level.

The sheer amount of enemies and traps onscreen can really make Damsel an infuriating experience. It often feels like there’s no design at all. This becomes even more bothersome in the arcade mode. In each arcade mode level, you get three lives. If you fail three times, it kicks you to the main menu. The game has a couple dozen levels per area. You can make it to level 24, only to accidentally shoot a hostage that’s behind an enemy and have to start over again from the beginning. 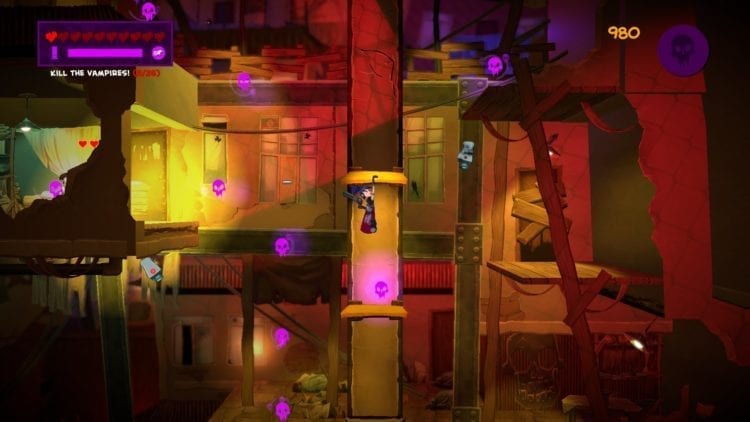 As you can see, the foreground blocks the enemy and hostage

It’s worth mentioning that, even though Damsel comes out of Early Access today, it only has two of the three areas that are going to be available. This is a $20 game, but I saw everything there was to see in under five hours. I honestly don’t understand why the devs are releasing it now, as it’s still missing a full third of its content. Along with the control and level design issues, this game definitely doesn’t feel like a finished product.

I know this all looks really, really negative, but there are times when Damsel is enjoyable. When I get into a groove and adjust to the control issues, the game can be a lot of fun. This is why my score isn’t as low as this review’s text would seemingly indicate. I hope the devs tighten up the controls and remove the gun limit, as both of those changes would make the game much more fun to play.

I’d also greatly appreciate the option for player-created levels. Designed levels in Damsel would be so much better instead of the lazy score-chasing the game has. I think the game could have been a lot better if it had done this. The gameplay is enough to make a good game, but the devs just decided it needed to be about leaderboards instead of level design. Strangely, there are no medals for reaching certain scores, which makes getting high scores in the campaign feel absolutely pointless.

With some serious changes, Damsel could be a worthwhile purchase. It has the potential for really solid gameplay, and it can be very satisfying at times. But it just doesn’t feel like a complete game. Between the laziness of the levels and the extremely small amount of content, I really can’t recommend it to anyone who isn’t obsessed with conquering the leaderboards.

Damsel misses the mark in many ways, but really isn't all that bad. It's more of a glaring missed opportunity than anything else.

By Mike Straw30 mins ago
Hardware