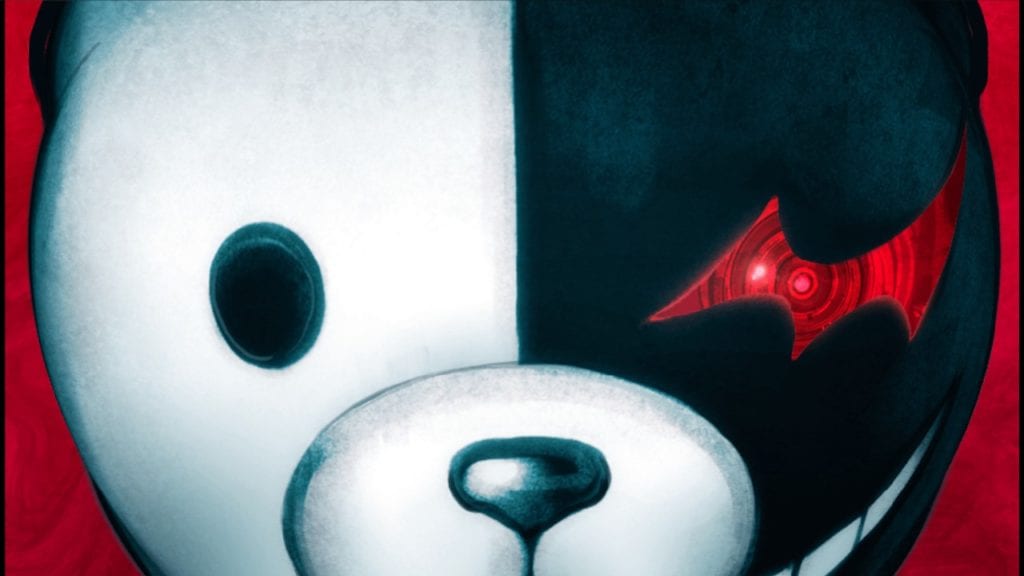 Best described as a weird hybrid between a visual novel and a murder-mystery puzzler, Danganronpa: Trigger Happy Havoc puts you in the teenage sneakers of Makoto Naegi, a new recruit of the prestigious Hope’s Peak Academy. So prestigious, in fact, that the only way to get in is to be so truly exceptional at something that you’re the “Ultimate” at it: the Ultimate Pop Star, the Ultimate Biker Gang Leader, the Ultimate Fanfic Writer, etc. Makoto was randomly chosen by lottery, signifying him as the Ultimate Lucky Student.

Good deal, yes? No. On arrival, this year’s new class passes out and finds themselves within a Hope’s Peak that’s completely sealed off from the outside world, and the “headmaster” is a psychotic remote-controlled bear called Monokuma. The only way out is to murder a fellow classmate and get away with the crime. If you commit murder and aren’t fingered by your classmates, you live and they all die; if you are revealed as the culprit, then you’re executed and everyone else returns to their life within the school… until the next murder, at least.

And the potential suspects get fewer and fewer.

It’s a bizarre setup, but an effective one. Half of your time is spent getting to know your classmates and hanging out with them. The other half takes place after a murder occurs, at which point you need to investigate the crime, figure out whodunnit, and then prove them guilty at the resulting Class Trial. Getting to know people and then finding them brutally murdered or realising that they’re actually a conniving killer, while also figuring out just what the deal is with the psycho murderbear and why you’re trapped in the school, is quite a thing.

I played through both this and its sequel on the PS Vita awhile ago, and while they’re no Phoenix Wright in terms of mind-bending crimes and courtroom scenes – focusing more on the story than on seemingly impossible crimes and rigorous mental workouts – the Danganronpa games are very, very good. (Also: Phoenix Wright ports, please, Capcom.)

Before we get on with discussing the port (which is largely pretty decent) I’ll quickly add that if you have any intention of playing the game, don’t Google for information about it. As there’s a sequel, a spin-off game, and an anime adaptation; and as both another game and a not-adapted-directly-from-a-game anime are in the works, quite a lot of spoilers for this first game are either right out in the open or can easily be inferred by returning cast members. Even in the screenshots here, I’ve deliberately tried to obfuscate as much as possible about the first murder victim and the first trial, because very little in this game goes the way you’d expect.

Also, one of the trading cards contains a bit of a spoiler. So, uh, you might not want to look at those for awhile.

Anyway, yes, the port is largely pretty decent. Here’s a quick look at your launcher options:

I haven’t tested it fully, but Fullscreen doesn’t appear to make use of letterboxing or pillarboxing. I’m not entirely certain whether it plays with the screen’s FOV or just stretches stuff, though; all I did was fire up the main menu in fullscreen on a few different resolutions and aspect ratios to check. I would guess it’s the latter, though it’s not inconceivable that it is letterboxed/pillarboxed in one or more resolutions, as I didn’t try everything.

Also, the game runs in full 60FPS, which is really nice to see. I’m 90% certain the cutscenes themselves are rendered in 30FPS, but I wasn’t really expecting them to be entirely re-rendered into 60FPS, so I’m not going to hold that against this equally unexpected port.

The game rarely looks bad, but the character art is still the sharp, detailed highlight of this resolution upgrade. Likewise, pointing and clicking works basically perfectly on a mouse.

The graphics themselves are a mix between “really quite nice at 1080p” and “looking a bit arse because they’ve been upscaled.” Most of the in-engine stuff is really nice, although inevitably, the textures aren’t amazingly sharp. Things like the character portraits, however, remain gorgeous; presumably high-resolution source images were used for these. Running it in a window at 1280×720 is probably the best way to make it look really nice without running it at Vita resolution, but it’s generally okay in fullscreen, barring some text blurring issues (which may or may not be being patched, depending on whom you ask). Some of the shots used in this piece are from 1280×720 windowed and others are from 1920×1080 fullscreen, so you can take a look and decide for yourself.

The game looks quite lovely most of the time regardless, as it makes use of an unusual “pop-up book” art-style. As ever, using an unorthodox aesthetic does quite a lot to mask any potentially dated graphics.

You probably spotted this in the loader options, but you can choose whether the control tips offered by the game are for gamepad, or for mouse and keyboard. And, yes, the mouse/keyboard stuff is generally acceptable.

Menus: apparently the hardest thing to do in a port.

Gameplay is divided up into… let’s say four segments. First up are the menus, where – annoyingly – you cannot use the mouse cursor to select stuff, but you can use the mousewheel and the left mouse button to cycle through options. Half marks, there.

Second is wandering the school, which is done from a first-person perspective, and this is done via WASD and mouselook. That’s basically perfect, as far as I’m concerned.

Third is investigating particular rooms. The mouse controls the reticle which you use to click on stuff you want to look at or people you want to talk to, while WASD (or holding the right-mouse button) pans your view around to peer into the sides. Tab highlights everything you can interact with. Again, fine by me.

Finally, the class trial stuff. This comprises multiple different game modes, but all of them arguably control better with the mouse than they ever did on the Vita. For the most part, you’re controlling a reticle with a mouse and “shooting” incorrect or contradictory statements with “truth bullets”. Or you’re playing hangman and shooting letters. Or you’re targeting statements with the right-mouse button and shooting them with the left-mouse button, to the beat. Basically, lots of aiming with a deliberately wobbly cursor, and pointing at stuff and then clicking on it is what the mouse does best. So, again, this is all fine.

There are a fair few minor blights, though. There’s seemingly no way to remap the keys, and while they’re mostly fine (Shift is run, Tab brings up the map overlay) a few of the choices aren’t exactly ideal. “R” is the key to exit a room, for instance, and that slipped my mind more than once. Escape brings up the tutorial/controls stuff, while F1 and F2 bring up the actual in-game menus and message logs, and I’d probably have swapped them around. They’re all controls that are within easy reach of your left hand, though, which makes a lovely change from some ports I could mention that were presumably designed for omni-limbed tentacle beasts.

Hey, I’m not the one who ported Toukiden: Kiwami.

The in-game options themselves are also a bit sparse, offering basic volume controls, reticle speed adjustments, and the (very welcome) ability to turn off the head-bob when moving. Those who suffer motion sickness will likely appreciate that one. It’s not exactly a super-intensive game, though, so there aren’t really many settings you’d need to change on the fly.

Also, while you can choose between English or Japanese voiceovers, it looks like you can only choose this when you start a new game. If you start off with English voice acting and decide it’s awful, or start with Japanese but suddenly want to understand what some of the random barks mean, it appears as though you have to start a new game to adjust things. That’s a bit cack.

Oh, and you don’t actually unlock the ability to access the system menu within the game until you’ve gotten part-way through the storyline and received your little PDA. That’s only really an issue if you seriously balls up your launcher options or if you’re a games journalist wanting to test things out quickly. Ahem.

This is a corridor in the wandering-the-halls bits. I know it’s not the most exciting screenshot to look at, but I think it indicates what I meant about how some things are sharp and some things are a bit duff, while the general aesthetic effect remains pretty nice.

Finally, I’d like to briefly complain about the fact that this incredibly text-heavy game offers no way to change the speed at which the text appears, and while clicking the left-mouse button sometimes autofills the line, it occasionally skips straight past it. This is mitigated slightly by being able to tap F2 to read whatever you just missed, but I read a lot faster than the text appears, and I hate it when games don’t let me adjust the text speed.

While I wouldn’t call this a perfect port, my experience with the first chapter indicates that it’s an awful lot better than a lot of the ones that we get. It’s perfectly playable, and these minor issues didn’t do much to dampen my enthusiasm for playing through the first chapter again. Work has been done to make Danganronpa work on higher-resolution displays, and to make it function serviceably with the mouse and keyboard – and that, I think, is the most important stuff.

I’ve complained quite a bit, yes, but pretty much every issue I’ve highlighted is a minor irritant rather than a sigh-heaving problem, and it’s not something that should put you off exploring this dementedly twisted little world – particularly not for the current asking price of just under £20. Danganronpa: Trigger Happy Havoc leads you by the nose a little bit too much, but its intriguing story and a few genuinely unexpected twists more than make up for the slightly-too-easy gameplay.

BioWare feeling out interest in a Dragon Age Tactics title