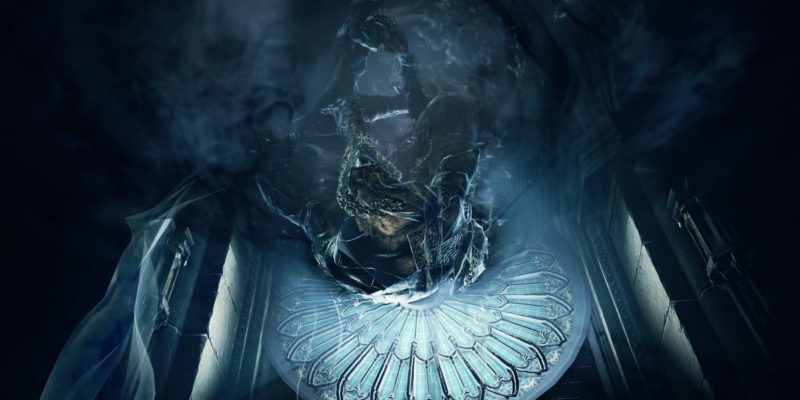 Regular readers will know that I am not really the best person to check out a new Dark Souls game. Peter and Tim are the Dark Souls experts around here; but they weren’t the ones in Germany. It’s is a series I’ve been wanting to try for ages but have never found the time, so the Dark Souls 3 Gamescom presentation was a baptism of fire.

What you’re getting with this article is a neophyte’s view of the third game.

The demo started with our character looking over a vast medieval cityscape which, as I understand it, has the typical gloomy Dark Souls feel. There was a real sense of scale, and everything we could see far away in the distance can ultimately be reached as you traverse the world. It was damn impressive.

Hidetaka Miyazaki and the From Software development team want to convey a sense of atmospheric immersion in the game world.

Leaving the parapet, we moved downwards and closer to the heart of the city. Here, we came across the first enemies and got a demonstration of the sword-play. In Dark Souls 3 the stated goal is to have deeper sword combat, with different styles of sword action built around stances. We were shown one called the Ready Stance, where the character raises the sword onto the forearm and thrusts forward to break an enemy’s defense. It was highly effective making light work of a skeleton chap.

After disposing of a few more skeletons we came across another horde of skeletons ready to ambush us as we moved along a parapet. There were two choices here, take on the skeletons or find a way around by heading up some stairs to a higher level. Taking the second option seemed the natural choice.

Heading up the stairs might not have been such a great idea though, because on reaching the top we were met by a rather vicious dragon who wasn’t happy to see us. The dragon was swishing around at the top of the stone stairs so we made a hasty retreat back down the steps. Fortunately, the dragon had also inadvertently murdered the skeletons waiting in ambush. The way was now clear, and it was an example of how situations and pathways can change depending on what’s going on in given area.

Moving on, we took a ladder down into a dark dungeon area and it was here we encountered some ambushing shambling creatures. This was also the moment to make use of the trusty torch. In Dark Souls 3, torches can be used as often as you like (unlike the prior game where it had a limited lifespan).

It was here we also encountered the first gravestone, which was small and tucked away against a wall. These stones can be illuminated and used as landmarks to show where you’ve been. They also serve as lore delivery points as you progress in the game.

Whipping out a Great Sword to replace the shorter sword demonstrated how substantially the two weapons differed, with the larger blade featuring a much wide attack radius. This sweeping sword has a large battle arc and was noted as particularly useful against knights. Speaking of knights, in Dark Souls 3 there’s a stated aim to bring them back as powerful adversaries. In fact, we were about to find out just how formidable they now are.

We encountered two knights, which are hard enough to take down on their own, so battling two was going to be a real challenge. One knight was wielding a sword while the other was particularly handy with a lance. The sword wielding knight moved faster so the trick here was to separate the two with some quick movements around both attackers to draw them apart. Movement in Dark Souls 3 is faster than the previous games, so the change in pace was demonstrated well here; showing how it could be used to your advantage in a combat situation, especially against larger enemies. 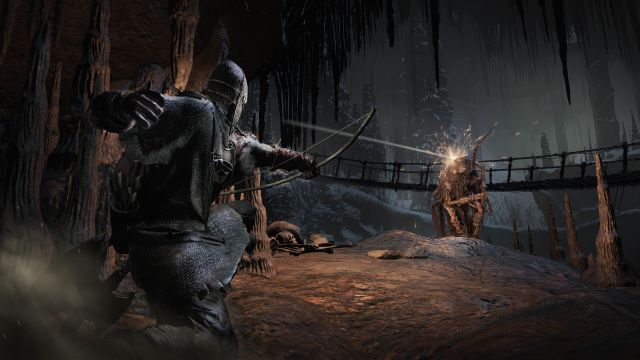 With the Knights disposed of it was time to check out some more weaponry, and a short bow was drawn against a skeleton. Again, movement was key here. Players can use the short bow while moving, which made light work of the skeleton thanks to some dodging and rolling around.

Scimitars were the next weapon to be demonstrated. These can be dual wielded and, in Dark Souls 3, used with a spinning attack stance. Sweeping around generates an AOE effect which could prove particularly useful against lighter, crowding enemies.

In one of the later sequences we found ourselves on a tiled roof with a particularly nasty looking undead creature which had spawned a massive snake-like creature from its back. As the creature moved towards us the huge black snake thing on its back was lashing around trying to make a hit. The effects were pretty spectacular with roof tiles being smashed and debris flying everywhere. It was not somewhere we stayed long, despite how fantastic it was to watch.

We were almost at the end of the demo but there was still a boss to fight. That’s when we were introduced to The Dancer of Frigid Valley.

Moving cautiously into the boss arena we lit an altar and the doors closed behind us. The camera then panned up toward the ceiling and the Dancer descended onto the floor. This massive feminine-looking distorted knight looked like it would make mincemeat of us, she/it was huge, and came with a variety of nasty looking fire sword attacks which lit up the room and set scenery in the arena alight. As the attacks continued the arena was becoming more dangerous as the flames spread.

The Dancer was aptly named because she/it moved gracefully around the room in a dance-like motion which was mesmerising to watch. After a few hits, the Dancer’s health had been somewhat reduced and her attacks changed. It wasn’t just the fire sword we had to contend with, a second weapon had been drawn, an Ash Sword. With fire and ash flying everywhere the style of the battle was changing and it was here we met our death.

Although I wasn’t as familiar with the series as I would have liked going into this, I saw enough of Dark Souls 3 to be looking forward to it. By the time it’s released next year, I’ll hopefully have found time to play some of the previous Souls games.

By A.K Rahming14 hours ago
Previews