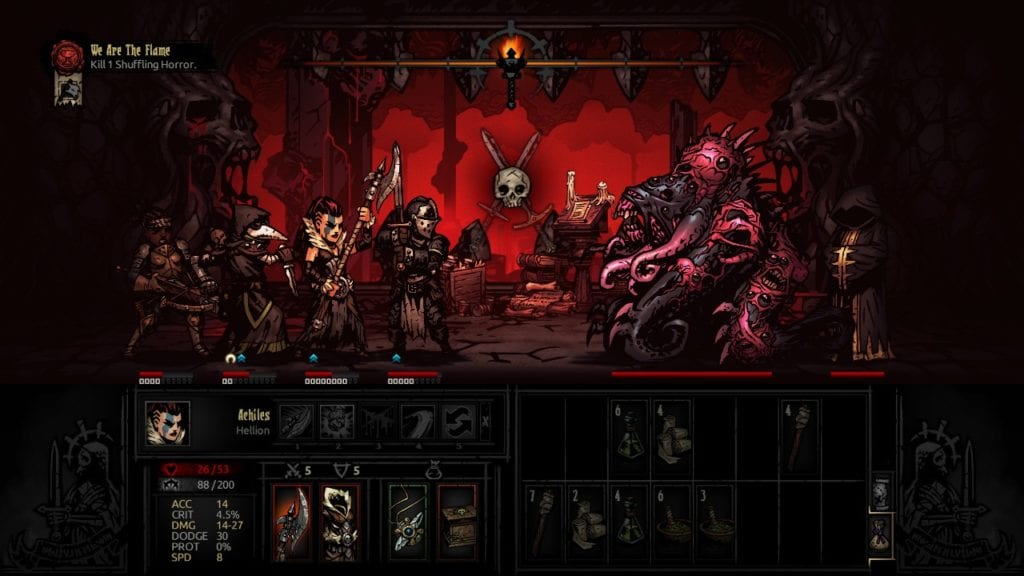 I’ve always been a fan of videos that go behind the scenes of video game development. It’s one of the driving reasons why I’ve picked up limited editions of games — not for the metal case (though they are cool), but to watch the included video of how it all happened. With production by Gameumentary, our sister site The Escapist is hosting one such video. The Darkest Dungeon Documentary takes an hour-long look at how the folks of Red Hook Studios started work on a project that stressed out millions of gamers worldwide.

The Darkest Dungeon Documentary takes you on a journey of how it all began. In the video, creators Chris Bourassa and Tyler Sigman talk about the formation of Canada-based Red Hook Studios, and the struggle to get their brainchild from simple sketches to the full release. The documentary goes over everything that went into the game, ranging from its dreary design to its haunting narration.

“The name, Darkest Dungeon, all of that was just kind of like these loose ramblings in a sketchbook,”Bourassa said. “I just feel like I got to a point where I’d had enough [of working at bigger studios]. If a project was going to get canceled, I wanted to have an intimate understanding of the why and the how as opposed to just being informed one day that that was it.”

Overconfidence is a slow and insidious killer

Despite the warning of overconfidence given by the game’s narrator, Red Hook pushed forth — even as resistance mounted. One of the more intriguing stories shared in the Darkest Dungeon Documentary was the controversy that rose from the game’s early community.

Following the 2015 Corpse & Hound patch, some of those playing the early access version of the game became quite vocal for a change they really didn’t like. The patch made it so slain enemy corpses would remain, forcing players to slice their way through fallen flesh for remaining foes. According to Bourassa, the game felt easier before the update, and small minority wasn’t fond of the extra sweat on their brow.

“We went back and forth on this corpse thing,” Bourassa said. “Ultimately, we decided ‘No, this is the correct choice.’ It works. Did we roll it out properly? No. Did we set expectations properly? No. Should I have drawn corpses for every single monster so that it was this fun feature – like, look at all this new art! – yeah, I should’ve done that. But we didn’t think we needed to, and those were our mistakes.”

For the rest of the Darkest Dungeon Documentary, check out the included video above.

Breach blasts his way into the spotlight in Valorant introduction video

The Waylanders, a Celtic time-travel RPG, has an impressive voice cast

By A.K Rahming7 days ago
News