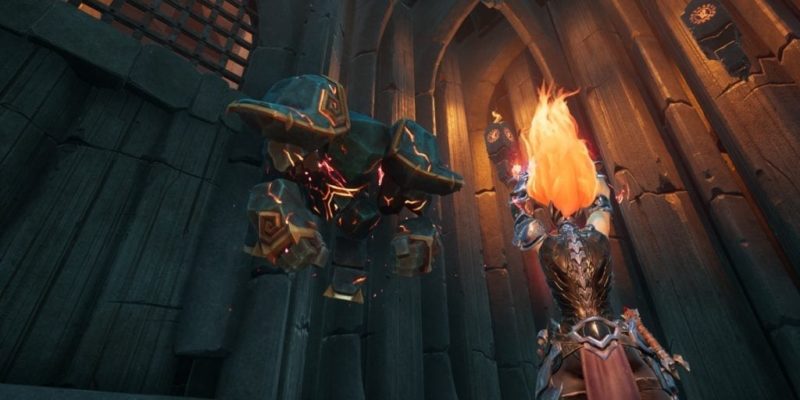 Darksiders III was one of my favorite games from last year. I didn’t check out The Crucible DLC, however, as I don’t much care for fighting waves of enemies in arenas. Keepers of the Void, however, adds hours of additional gameplay to the game. But at $13 USD, the question stands: is it worth it?

Much like how Dark Souls generally handles its DLC areas, Keepers of the Void has you access the new one by warping to an area separate from that of the main campaign. While everything in the main game is deeply interconnected, Fury can only get to The Void by talking to Vulgrim at one of his plinths. That said, it does a great job of integrating itself into the rest of the game and feels very natural alongside it.

Keepers of the Void doesn’t exactly add anything in the way of story content. Narratively, it’s more akin to a sidequest than a meaningful episode in Fury’s adventure. Vulgrim requests that Fury venture into the Serpent Holes and dispatch creatures that have invaded it so that he can once again travel freely. The DLC does have a few cutscenes, but they mostly have to do with Vulgrim letting you know that you have access to a new part of the map or Fury talking to herself before the new boss battles. 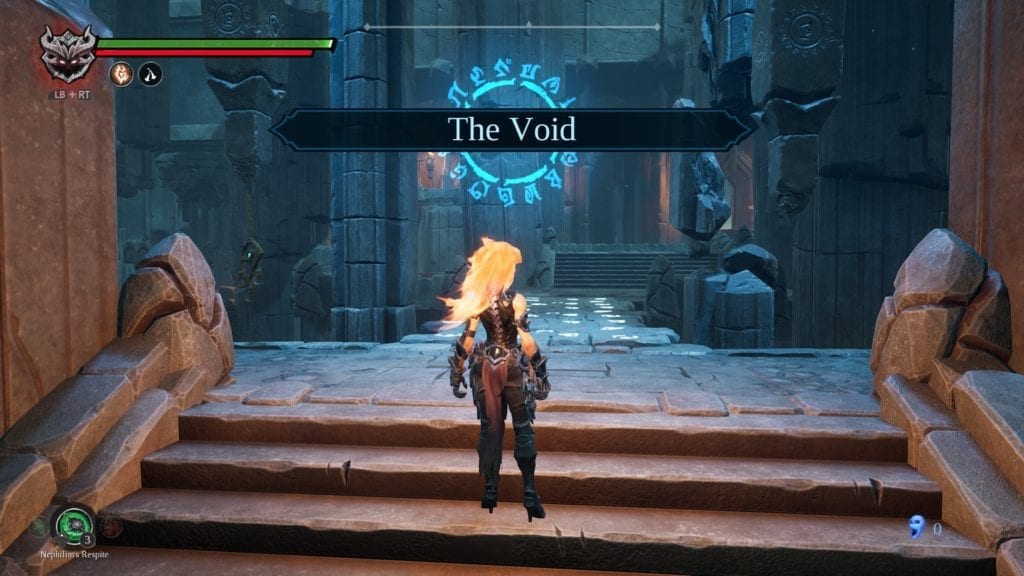 If you have a late-game save file, you can certainly just go in and play through the whole thing. However, it’s designed to be played alongside the main game. Because of this, it’s best to experience Keepers of the Void during a new playthrough and not towards the tail end of a previous one. You’ll first gain access to The Void after Fury obtains the Flame Hollow. This doesn’t unlock the entire area, however. Rather, you just gain access to a quarter of it. There are four wings in The Void, and they all unlock as you obtain each of the Hollows.

I thought this was quite neat, as it has you going back and forth between the DLC and the main game while playing. It makes The Void a persistent area that pops up multiple times across your playthrough. It also feels rather different from the main story, so it contrasts nicely. Keepers of the Void returns players to the Serpent Holes that War had to go through to fast travel in the first Darksiders. Similarly, everything is stone, and pathways materialize as you walk near them. It serves as a cool throwback that I hadn’t expected.

As opposed to the purer combat and exploration focus of the main game, Keepers of the Void has even more of a focus on puzzles and platforming. The puzzles all revolve around orbs that you have to hit with charged Hollow weapon attacks. For instance, an orb hit with a Flame Hollow will cause a block to move. It can then often be hit by another Hollow, such as the Storm Hollow, which adds a gust of wind to the top of the block, allowing you use it to glide. There are a lot of these block puzzles. Surprisingly, they can prove fairly challenging at times. 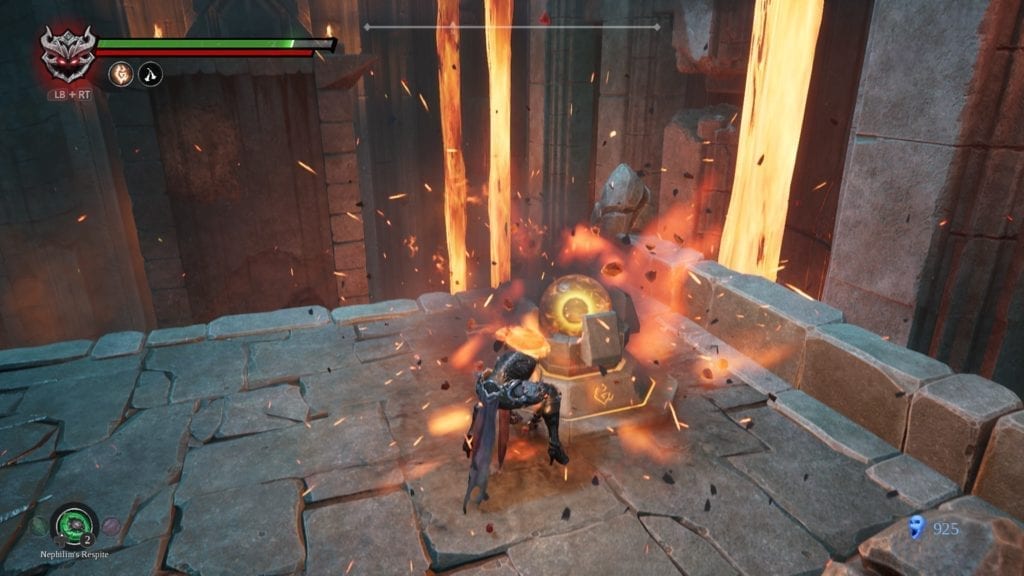 The Void also has all-new enemies, although there aren’t a great many of them. They’re all made of rock, and some of them can be quite tough. You’ll also encounter a few places to backtrack to if you don’t have all the Hollow abilities when you arrive in that wing. Just like the main portions of Darksiders III, areas are strewn with items to collect, including weapon and enhancement upgrades. You can even find two brand new enhancements.

On top of all that, some of the biggest stars of Keepers of the Void are the five new bosses. Four of these bosses all use the same character models but have different abilities. Each time you defeat one, Fury obtains a new Hollow weapon, which greatly increases the number of weapons you receive in the game. These weapons are pretty cool, but they offer the same functionality as the original weapons. Some you may like more, though. I especially enjoyed the ax, which works as a faster version of the mallet.

Once you defeat these four bosses, the path to the final boss opens up. This boss is the toughest one in all of Darksiders III. If you like a challenge, you’ll probably get a kick out of it. The other bosses aren’t pushovers either, with the Stasis boss being very tough as well. Naturally, you can replay Keepers of the Void in new game plus, so it can significantly add to your playtime. 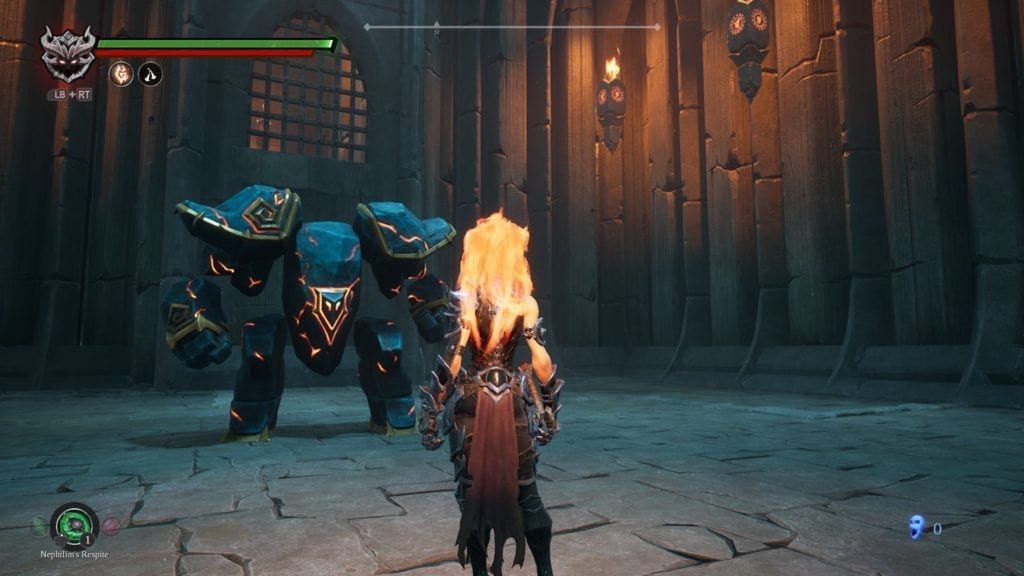 Once you beat the final boss, you earn one of Keepers of the Void‘s best prizes – the abyssal armor. This armor is very visually different from Fury’s default armor and has a handful of stat bonuses as well. If you don’t have The Crucible, this will likely become your go-to armor, but from what I’ve read, it honestly isn’t all that much better than the armors you obtain in that DLC. It’s still really awesome to look at, and it’s upgradeable in new game plus to boot, so it’s a good prize overall.

Speaking of new game plus, you won’t need to go back through The Void to re-obtain the weapons when you move on. Once you acquire the appropriate Hollow in the main story, you’ll get the weapon back right away, upgrades and all. But just like the main game, it’s a shame that you have to play through most of the game again to get certain weapons back. Especially considering that you don’t get to use the Stasis weapons very long at all.

So, it’s time to render a verdict. Is Keepers of the Void worth it? If you’re a big fan of Darksiders III and want several more hours of good content, then it definitely is. The new areas are fun to explore, the bosses are great, and the new weapons and abyssal armor help make it a worthwhile purchase. I’d say $13 is a fair price to pay for 4-6 hours of new content.