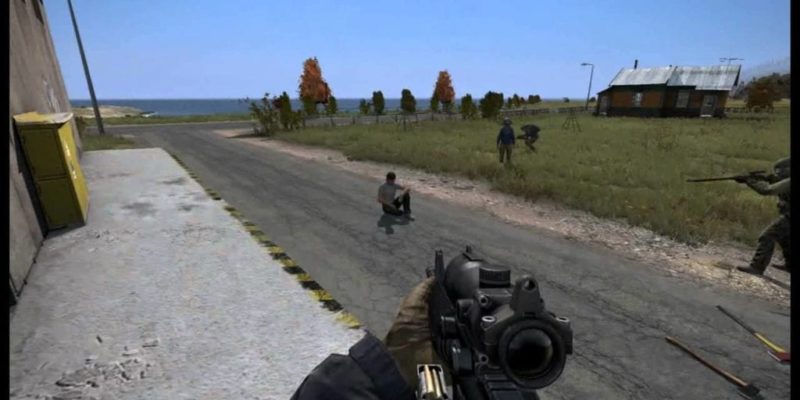 I must have only dabbled with the original DayZ for a few hours. The concept was great but the game itself always felt a little awkward – probably because it’s a mod built on the Arma 2 engine, which itself always felt a little ropey. When Bohemia snapped up Dean Hall and news broke that there was to be DayZ Standalone, it sparked a renewed interest. With its solid fanbase and an improved engine, it may just turn out to a well-deserved hit.

DayZ Standalone is finally here in a rough alpha form and it’s been a long time coming, although I’m surprised it’s taken so long for the game to finally make early access. Let’s get one thing straight. It’s currently rougher than a tramp’s scrotum and even creator Dean Hall encourages you not to buy it right now.

When I fired up the game I found myself on the coast, alone and under-geared, so my first goal was to hunt down some supplies – basically, anything that would fend off zombies and (of course) other players. Heading to what I assumed was north (I really had no idea) I arrived at a small village which looked pretty deserted.

More houses to look for stuff

There was nothing particularly notable in the first few buildings I explored, but when I ventured to the second floor of a house I was greeted by another player who was spurting blood everywhere. There was that awkward DayZ moment where you just stand like a statue and stare uncertainly at the other person to ascertain whether they are friend or foe. Everyone in DayZ is potentially a foe and it’s something that makes me feel rather uncomfortable.

I raised my hands and waved like a loon to indicate I had no interest in panning his head in with a weapon I didn’t actually own yet. Thankfully, this was enough to avoid confrontation. Breathing a sigh of relief I watched from an upstairs window as the chap made his way into the street, still spurting blood everywhere. It was clear he needed help.

Another player joined the bleeding man so I thought the humanitarian thing to do would be to join them and see if there was something I could do to at least stem the flow of blood. Stupidly, I didn’t have my mic plugged in, so through the wonders of the chat window I announced I was new and basically had sod all that could help, not even rags. I decided that perhaps with some searching I could find something to bandage the guy up.

A couple of house searches in I opened a door to be greeted by a hideous zombie hag who pursued me into the street at quite a pace. I was joined by the bleeding guy and we both piled into the zombie as she awkwardly lunged at the pair of us. After a few rounds of what can best be described as clumsy punching, she went down. The problem was I had now been hit so were both bleeding all over the place.

Fighting in DayZ is currently quite cumbersome – you can avoid being hit by strafing around the target but it’s awkward at best; even doing that I managed to acquire what would turn out to be a fatal wound. Okay, it was so early in the game that dying wasn’t a big issue, but I had failed to save a fellow player. Should I feel guilty about that? I’m not sure.

Respawning is simple enough but you do lose everything (which, in my case, was nothing) when you die. The joys of playing a survival game!

Count yourself lucky if you’re not just shot on sight.

I got back on my feet with a new character. This time, things got off to a much better start as I quickly scavenged up a nice motorcycle helmet, a shovel, a backpack and an axe. Inventory space is limited to four slots when you start so you really need to find gear that will allow you to carry more before you can start playing inventory Tetris properly.

Respawning placed me pretty close to what looked like a bunch of abandoned low-rise apartments and it seemed a logical place to find stuff. More buildings equals more stuff, right? Well, probably, but even after watching eight episodes of The Walking Dead earlier in the day, my survival brain didn’t compute the fact that more buildings probably equals more zombies – and possibly some right bastards that would love to steal my gear.

Dashing up the hillside towards the apartments I could see something moving pretty quickly towards me a long way in the distance. It couldn’t be a zombie; it was miles away, and there was no way it could have sniffed me out from that distance.

Wrong! It was a zombie and the bastard was quick. Time to run and head for the trees away from the buildings. While running another three joined the pack, and it looked like a lost cause because – considering the dodgy combat – there was no way I could hammer these things to death. The screen went grey. I was dead. Again.

This incident was unusual because you can travel for ages without even encountering a single zombie (which is one of the problems that’s due to be fixed in the future). These three zombies were probably the only ones in five-mile radius. Just my luck.

Run away, run away!

The next respawn was even better: a small village which supplied me with new shoes, a t-shirt which I tore into rags, a crowbar, a flask and a big backpack. That was from two buildings, and it was a better haul than I had previously experienced at all. This seemed an opportune moment to do some exploring and get my bearings.

It’s amazing how many folk ask you if you know where you are when you meet them on travels, and if there’s one thing in this game that freaks me out it’s the actual people playing the game. Like with most good zombie movies, with DayZ, the horror doesn’t come from the walking corpses.

Running through a rail yard some guy ran up asking me if I knew where we were. I had no idea, so told him exactly that and went on my way. For the next three or four minutes, all I hear in my headphones is this faint voice saying “Where are you?” and “Where did you go?”. The guy was effectively stalking me which is an incredibly uncomfortable experience, especially when his voice was coming through as a creepy, softly-spoken taunt. I did give him the slip but it’s weird moments such as this that attract players to DayZ.

Speaking to other people while playing is really important, and as not everyone is a complete dick that just wants to loot your corpse, communication is key. One chap, who told me he’d just been shot by three people on another server, offered to tag along with me. Sadly, I let him down: I starved to death after about four minutes of us running hand-in-hand across a hillside. Sorry, mate. Our brief bromance will never be forgotten.

DayZ is still a long way from reaching its full potential and Dean Hall is absolutely correct: don’t buy it yet. Oops! Too late. 850,000 of you already have.

Right now, the game is really quite buggy with all kinds of weird glitches. There’s probably a large part of the community enjoying that – a lot of people liked DayZ for the unpredictable stuff that might happen – but nonetheless, a lot of work needs to be done on the absolute basics like the clunky combat and the zombie count before DayZ Standalone is easy to recommend.

This video is great example of what can happen in DayZ.

It’s hard to tell exactly where Hall and his team are going with it right now, but to make this a really enthralling game is going to take a lot more work. Most players are calling it a hiking simulator at the moment and they’re right. Scavenging building after building and then running long distances does not make a great game… although thinking about it, I’m sure that if UIG released Hiking Simulator they’d probably have a smash hit on their hands, so what do I know?

I’ll keep playing as more updates are released but the fun factor is a little limited right now. The bottom line is this: if you’ve not already parted with cash for this alpha then hold on and see how the development progresses. Remember, DayZ Standalone isn’t even going to hit beta until the end of 2014.