After last week’s update, the DayZ team are still working away to get the latest updates out as a stable release but there are apparently “two serious issues” to fix before that happens.

Let’s not dwell on the current issues though, there’s more going on behind the scenes with survival development. Making fireplaces and cooking appears to be the focus right now and visual effects such as heat haze are being added to the flaming piles. Fires will also be able to be upgraded to ovens as you can see below. Ideal for pizza making.

An oven. Not a fire.

There’ new towns too with new areas coming in the next update. A couple of teaser shots were pushed up so show what’s being worked on. 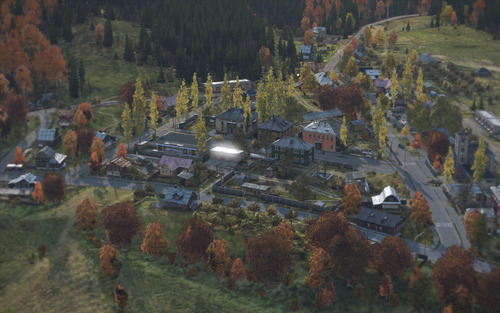 While survival is the team’s key focus, work on weapons continues with an AKM currently being worked on by the art guys. Bows were always going to be tricky to get right but they’re getting there with arroew now sticking in targets and the look of drawing a now is now looking better. It sounds like the bows have been a right pain to sort out.

The process of adding these new features means that new bugs always crop up and Hall is adamant they don’t want to release more bugs on tot he stable servers.

“We are committed to not releasing builds onto stable to introduce new game breaking bugs. Now that we’ve fixed those bugs, we’re internally verifying and fixing any new bugs that have been introduced. We will do an unscheduled update the moment we are confident we have a suitable build to release”

When will the next update appear on the stable servers? Hopefully soon.