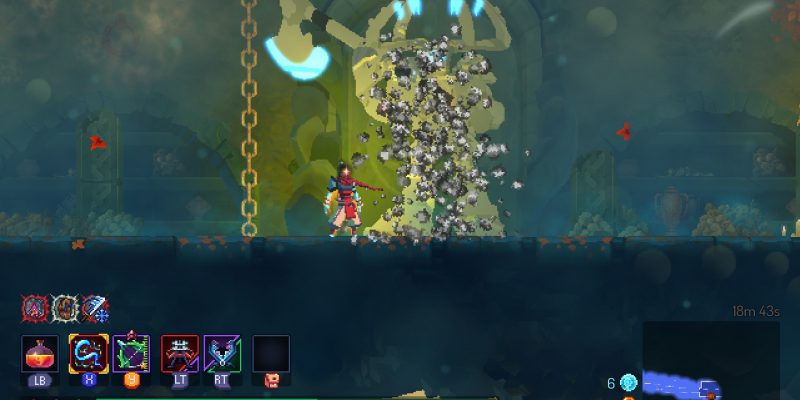 Dead Cells has just had yet another update, bringing with it new weapons and mutations. Despite having had years of content updates, there appear to be no signs of it slowing down. I got to field some questions to Steve Filby, the marketing and business development manager for developer and publisher Evil Empire.

Considering the game just recently got a massive update, we wanted to ask about the game’s development, while digging into Evil Empire’s method behind creating one of the most admired modern indie games.

PCI: For starters, Dead Cells is beloved along with being one of the most enduring action rogue-lites in existence. How does it feel to have set the standard for an entire sub-genre?

Filby: Pretty good! Of course, we wanted the game to be a hit and believed we were making a decent rogue-lite, but the level of success we saw just blew us away. It’s great to see that standard being pushed by recent games too – creating a solid indie scene of high-quality games and studios is great for all of us.

PCI: What was your initial response when you saw how much adoration your game was receiving?

Filby: Right at the very beginning, we didn’t know exactly what it would mean; the game seemed to be selling really well and everyone was heaping praise upon it, but we didn’t really understand at the time just how big it would be, so it was kind of weird. As the developer you tend to be laser-focused on the faults of your game, so watching everyone love the thing and completely miss glaring error X that we’re ashamed of, was a bit of a trip.

PCI: The most recent update added a literal tombstone as a weapon. What kinds of conversations do you tend to have when deciding on what new weapons to include? And how does that differ for sillier weapons?

Filby: We try to have a theme each time new weapons are added in an update, so that helps narrow down the decisions from the start. For example, the most recent update only added big, heavy weapons, so it was easy to decide on a club, giant ax, and the tombstone. If weapons are being created for a DLC, then we’ll add weapons that fit creatively with the new levels – that usually means weapons that the new enemies are carrying, or that we can create from their bodies or the new environments.

Dead Cells has been out for nearly four years, so we’ve built a wishlist of weapons we’d like to add, inspired by other games, films, series, or suggestions from the Dead Cells community. To be honest, the conversation is pretty similar for the sillier weapons — the great thing about Dead Cells is that because it’s got that tongue-in-cheek side, we can basically add anything we want as a weapon. As long as it has an interesting mechanic, then the team will be up for it!

PCI: Similarly, three more mutations were added, including Execution, which continues to vary Dead Cells‘ many build possibilities. How do you plan these out in regards to how they might alter the gameplay ecosystem? And have you made any mutations that you cut out at the last minute because they were just too powerful?

Filby: We generally have a good idea of what is missing from the ecosystem from development experience, our own ideas, and community feedback, so we know what we need to create to fill in gaps while not upsetting the existing balance. Someone will have a spidey sense if a new mutation is going to be too disruptive before we even get to a testing stage.

This means that last-minute cuts don’t happen very often, as it becomes quite obvious early on if an idea just isn’t going to work. We test how the new mutations affect gameplay ourselves, then after that, we do alpha and beta testing with the community, so there’s a lot of chances to make adjustments in any case.

PCI: I love the new Fractured Shrines biome from Fatal Falls. It feels totally unlike any other biome in the game. How do you go about making sure that new biomes are different enough to warrant the player picking that route versus making it feel so different that it doesn’t fit with the rest of the game?

Filby: If we don’t make the new levels quite different, then no one would want to play them – we have 27 biomes now and quite a few are similar, plus the game is nearly four years old, so new content should always bring a fresh perspective. Generally, we’ll try to think up ways of impacting the core playstyle of the game, while respecting the unwritten “rules” of what you should expect as a player.

Fractured Shrines in particular pushes the boundaries with that by really forcing the player to think about their positioning or risking fall damage, which is something that doesn’t happen all that often in the game. That extra constraint really allowed us to play with enemy combinations and placement in order to create situations that force the player to think carefully about where they’re going to jump next, again not something you’re particularly used to in Dead Cells.

PCI: The fact that you have to wear the cultist outfit to get into Undying Shores was a fun addition. Were there any fictional cults in particular that inspired this? Also, do you imagine that many players continue to wear the outfit since it’s not a palette swap?

Filby: It kind of evolved as we added the story of Fractured Shrines where the cult lives. So there wasn’t a particular cult, just the typical big robe with a hood! Hopefully, people like to play with it as it’s a bit different than the rest, but it might be jarring compared to the other skins, so who knows!

PCI: Dead Cells utilizes level chunks, but do you ever think about how the game would work as a more typical Metroid-esque experience? If so, did you ever have any prototypes along those lines?

Filby: Of course we do. People ask us this question a lot and we know that Dead Cells would translate quite easily into a ‘traditional’ Metroidvania. It’s definitely something that we would like to explore, but just haven’t had the chance to do yet. There are only so many hours in the day, unfortunately.

PCI: The whips in Dead Cells are a blast to use. I love how fast and responsive they feel. Did you ever think about putting a stiff, rigid Castlevania-style whip in the game?

Filby: The idea must have been floated at some point! After all, Castlevania was a massive influence on the game but, as you said, we want the whips to feel lightning quick, so that’s why you haven’t seen a stiff whip introduced and likely never will. Sorry!

PCI: Dead Cells launched into early access nearly four years ago already. How long are you planning on consistently supporting the game with new content? Afterward, what’s next for Motion Twin?

Filby: Essentially until people don’t want new content anymore. We keep making content and our players keep on liking it, so we don’t see any reason to stop for the moment. There’s at least 18 months of new content already planned, so we’ll see how that goes and hopefully, there’ll be an appetite for even more. Motion Twin are working on a prototype, with Evil Empire (us) taking care of Dead Cells. We can’t tell you more than that right now, but watch this space.

PCI: Serenade sure is sassy for a sword. What made you want to have the sword talk? What was it doing in that vault by itself for all that time?

Filby: It was more a question of why not have a talking sword? The pets that we’d already introduced are silent, so we wanted to make our new companion a bit more engaging this time around, and a talking sword seemed pretty interesting to us! As for what it was doing in the vault all that time, well, that’s just a classic Dead Cells mystery…

While I’ll likely lose sleep regarding what Serenade was doing in that vault, we’d like to thank Steve Filby for his time and for his in-depth answers to our questions. As always, we’ll continue to have our eyes on Dead Cells for all future developments.