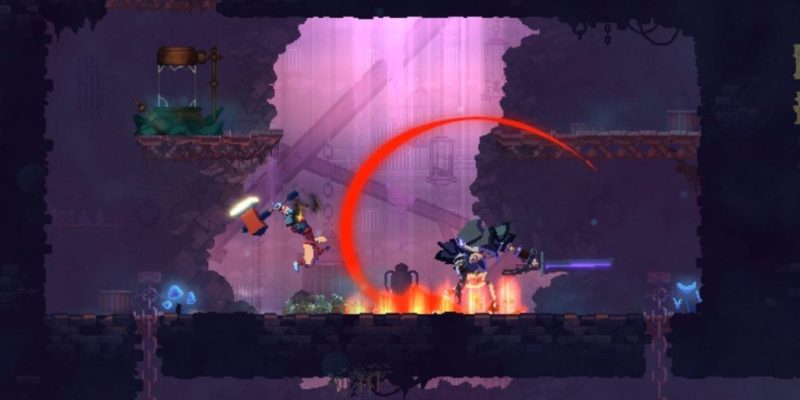 It’s tough to summarize Dead Cells without relying on clunky phrases. Motion Twin‘s first non-mobile release is a metroidvania platformer with roguelike elements. It relies on procedurally generated levels, character permadeath, and a system of resource-driven weapon unlocks. But despite the cumbersome language it takes to define Dead Cells, it’s a simple game to understand. Expect a challenging game full of punishing combat, dizzying levels, and extreme replayability. Dead Cells is easy to learn and tough to master. It’s also one of this year’s most rewarding experiences.

There’s a good chance you’ve played parts of Dead Cells before. It’s a game built on the framework of familiar classics. Dead Cells’ gorgeous pixel art and branching levels evoke Symphony of the Night. The way it handles persistent unlocks across playthroughs draws parallels to Rogue Legacy‘s generation-spanning gameplay. Bloodborne‘s rally system makes an appearance, too; landing attacks immediately after taking damage restores small portions of health. Dead Cells might nod proudly towards its inspirations, but it also carves out an identity all its own.

Dead Cells is all about balance. You move through levels with breakneck speed, climbing, leaping, and rolling through dangerous environments. But for every well-time double jump, Dead Cells encourages players to slow down and approach combat methodically. The enemies that inhabit the game’s environments are dangerous. A single mistimed block or careless roll can spell misfortunate. And because dying at any point means starting fresh, there’s an emphasis on mastering the push and pull of Dead Cells‘ gameplay that persists throughout the title. 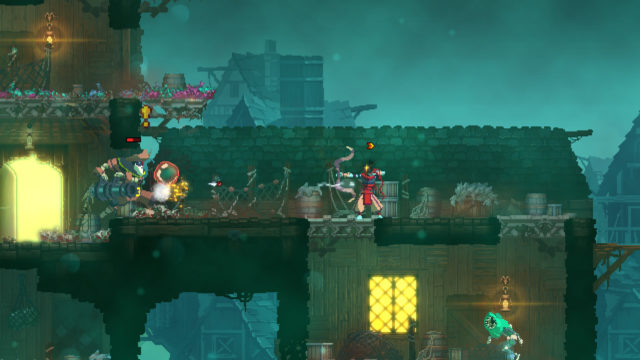 When push comes to shove, bows are just as useful as swords and shields.

Fortunately, you’re rarely without a proper arsenal. Although Dead Cells has randomized weapon, skill, and upgrade drops, every single item in the game is viable. It’s implemented rather ingeniously, too. In the game, every usable object — be it an electric whip, bone-shattering hammer, or thrown grenade — falls into one of three stat categories: Brutality, Survival, and Tactics. Each stat affects the player’s raw damage output by boosting the utility of weapons and skills associated with a given branch. Swords and hammers, for example, benefit from high Brutality, while devious traps like floor-mounted crossbows fall under the Tactics tree.

It might sound confusing, but Dead Cells is a remarkably readable game. Each stat correlates to a specific color. Red represents Brutality, while purple and green indicate Tactics and Survival, respectively. As players move through levels, they can find upgrade scrolls which boost a single stat. It’s through this system that Dead Cells allows players to experiment with different builds. Focusing on pure, unbridled melee DPS has the potential to be as valid as a Tactics build emphasizing ranged damage and bear traps.

There’s a surprising depth to Dead Cells‘ character customization. Although there’s only one protagonist — a reanimated corpse controlled by an electrically charged mess of goo — every run through its procedural corridors feels different than the last. With two weapon and skill slots available at each run’s outset, there is a considerable amount of room to player expression when it comes to loadout and potential builds. 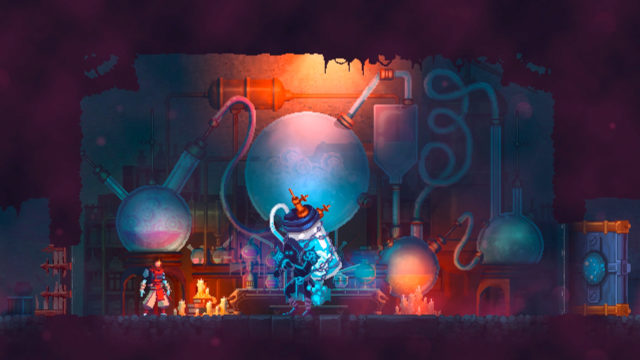 The Collector is an enigmatic character who unlocks weapons in exchange for Cells.

But even the best weapons, skills, and perks are useless in untrained hands. Dead Cells is difficult. As mentioned, the game provides little room for player error. It’s not uncommon to get cornered, stunned, and beat to a pulp all because you attacked when you should have dodged. True to its rogue-ish roots, death is inevitable and unforgiving. Once you die, it’s time to start over.

Instead of being frustrating, dying functions more of a motivator than anything else. A single, complete run takes around 25-30 minutes. Each level takes between 2-7 minutes on average. The bite-sized, randomly generated environments are littered with pickups, secrets, and blueprints — items that unlock a new weapon or skill if you manage to complete a level after snagging one. Many enemies drop Cells upon their defeat, a currency used to permanently add whatever blueprints you’ve recovered to Dead Cells’ revolving arsenal.

Cells, like blueprints, are only useful if you can finish a level without dying. Its all or nothing approach to permanent upgrades adds a level of tension to Dead Cells that punctuate an already polished game. Each level has at least one time-locked door. Getting to one of these doors nets players dozens of Cells and some gold for buying additional items. But rushing to one of them can leave you under leveled and ill-prepared for any challenges along the way. Dead Cells wants you to move through its stages quickly. It also wants you to be aware of how dangerous that can be. 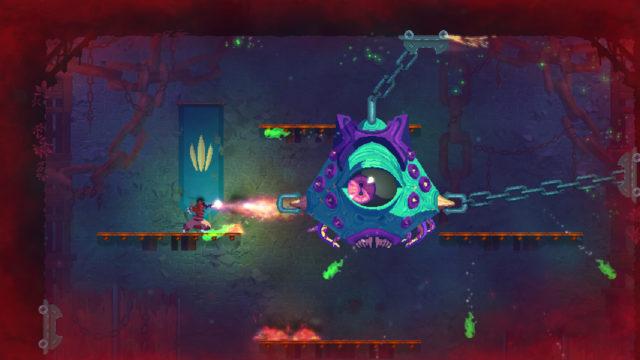 This monstrosity’s not even close to the toughest enemy in the game.

Dead Cells‘ greatest strength is in just how satisfying it is to play. Every action is well-animated. Its environments shine, no matter how decrepit and bleak they may be. The myriad weapons, skills, and stats encourage dynamic and iterative experimentation from one run to the next. Like the best roguelikes, Dead Cells knows how to build players up while crushing them time after time subtly. It’s a game that encourages mastery by teasing progress. Maybe next time, it says after a boss crushes you. Just one more run. It’s hard to put Dead Cells down.

Although so many parts of Dead Cells are direct send-ups to iconic games, the self-dubbed “roguevania” still shines. It’s a hallmark of well-executed, implicitly understood design. Dead Cells is, in no uncertain terms, a must-play game. Here’s hoping developers take cues from Motion Twin’s latest like Dead Cells did with metroidvanias before it.

Dead Cells is an excellent, challenging "roguevania" that encourages player experimentation and exploration across its beautiful levels.

By Kurt Perry14 mins ago
Reviews

By A.K Rahming2 hours ago
Reviews