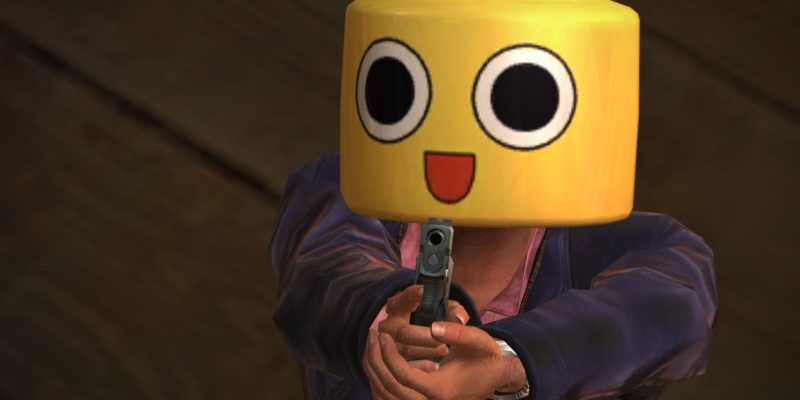 I have many fond memories of Dead Rising. The divisive zombie-smashing survival series debuted on the Xbox 360 back in 2006, and back then, I was playing it on a crappy CRT which made most of the text almost completely illegible. Despite this, I dumped hours into it; I finished the game, collected achievements, and went back into the zombie-infested Willamette Mall again and again.

I put up with Otis and his incessant nagging via transceiver. I squinted at blurry text. I worked out ways of efficiently levelling up and rescuing survivors. I wore a dress and charged zombies with a lawnmower. I really, really wished I could afford an HDTV. 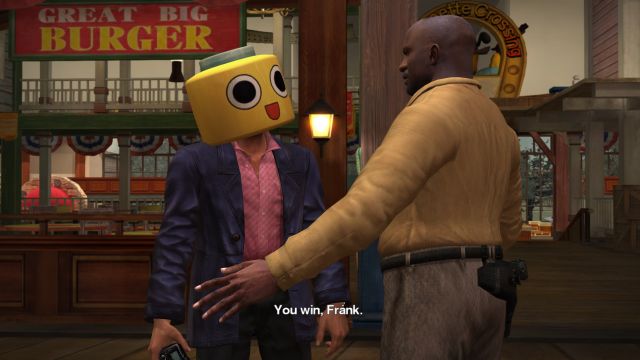 Playing dress-up makes the cutscenes much, much better.

I would like to say that this PC launch of Dead Rising is a much better experience than the one I first had. I’d like to, but I’m not quite sure I can just yet. On the one hand it offers an awful lot of what I want from a PC port; on the other hand, it’s got some rather serious bugs and interface quirks that may or may not affect your enjoyment.

No launcher, so we’re diving right into the options. These are divided into three: the descriptively titled Options, plus Graphics Settings and Control Settings. 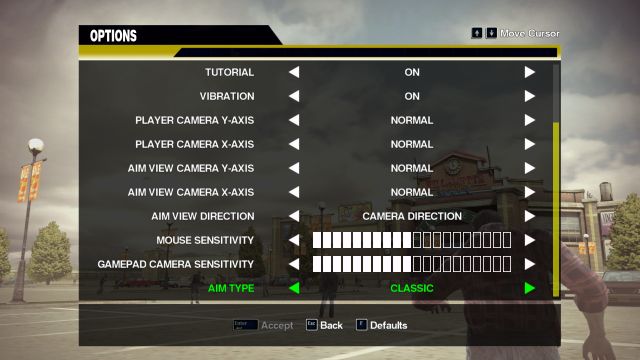 Options is surprisingly in-depth, covering everything from volume and subtitles (not pictured above) to whether or not you want the different camera axes inverted. It even lets you decide whether you want a shift into Aim View (the over-the-shoulder view used with guns or when lobbing things) to start with the view pointing at whatever your camera is looking at, or whatever the player character is looking at. I approve. There’s also the Classic/Arcade Aim Type toggle, although as there’s no description for this, I can only guess at what it does. And I will, later. 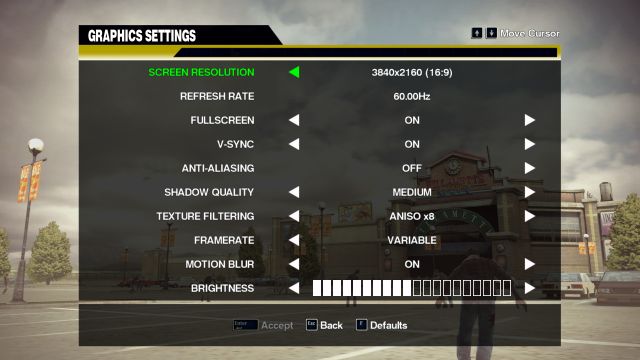 Graphics Settings aren’t half-bad either, for a port of a decade-old game. It’s apparently got support for 4K (“and beyond”, according to the store page) and while I can’t test that, I can at least confirm it let me play in 3840×2160, downscaled to my monitor’s maximum resolution of 1920×1080. You can play Fullscreen, Borderless, or Windowed.

You can turn off fucking Motion Blur, ramp Texture Filtering up to Aniso 16x, and generally make everything look remarkably sharp. And – hurrah – it supports multiple framerates, from 30 to 60 to “Variable”, which I suspect means it’ll happily go higher. It’s also rather well optimised, being that I could run it at 3840×2160 with everything cranked up to full, with nary a hint of slowdown. That’s on an i7-3820 with 16GB RAM and a GeForce GTX 970, for what it’s worth.

Disclaimer: I haven’t played through to the game’s final day when there are hundreds of zombies everywhere, admittedly, but the early scenes didn’t put up any struggle at all. Considering Dead Rising 3 ran alright for me, I rather doubt Dead Rising will have much of an issue even when the zombie numbers increase. 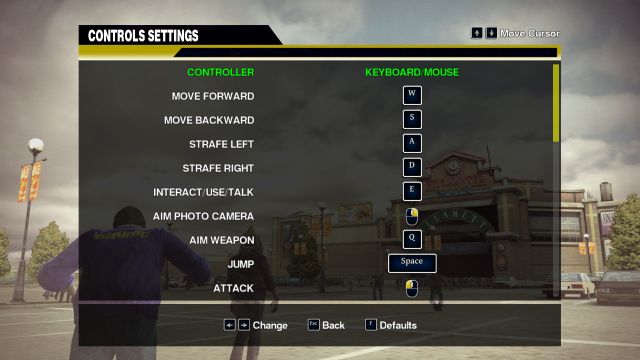 I also have absolutely no complaints about the Control Settings. Everything is rebindable (I swapped Aim Weapon from Q to the right mouse button, which by default is the Camera key) and – yes – this doesn’t necessarily interrupt other bindings. The QTE buttons are LMB, RMB, Q, and E; despite swapping around Aim Weapon and Aim Camera, this didn’t magically unbind the QTE buttons or confusingly swap them around too. Superb.

In terms of options and general performance, then, I’m basically pleased as punch with the way Dead Rising has shambled onto PC.

It looks pretty good for its age, too. While some of the textures obviously get a bit blurry when you’re viewing them close up and there’s a distinct lack of detail in others, the general effect is still strong, and some of the environmental textures are actually a lot nicer for being so sharp. As an example, the posters below: 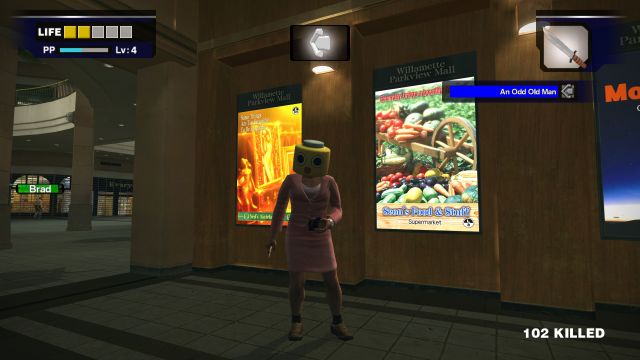 Ooh, pretty. And also possibly the first time I’ve actually used screenshots in this resolution in a Technical Review before.

So why did I say that I’m not sure this is a better experience than my (admittedly shoddy) one on a CRT screen a full ten years ago?

Well, firstly, there are some issues with the controls. For starters, there’s a really irritating degree of mouse smoothing, which I think you can disable (or tone down) via the mysterious Classic/Arcade Aim toggle… but I’m not 100% sure, and I honestly found Arcade to be more annoying than Classic.

Secondly, there’s a lot of negative mouse acceleration. A lot. In short, this means that if you swing the mouse really fast, the game will deliberately slow it down, and this can be incredibly off-putting if you’re expecting to spin the camera 180 degrees and it actually just goes about 90. 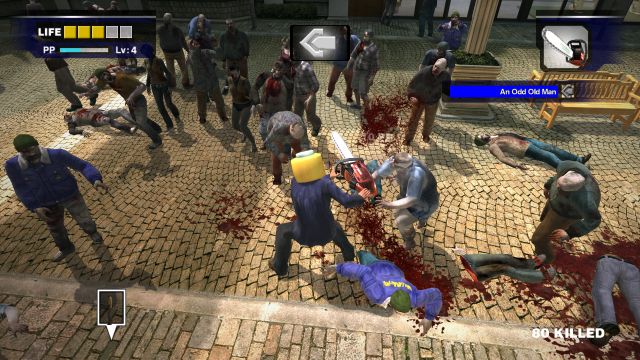 I’ve only just noticed, but that floor texture actually looks rather nice too.

I’m going to assume that neither of these happen on controller, but considering how well the keyboard and mouse controls have otherwise been implemented, I don’t think that’s really an excuse. This isn’t a port in which the keyboard controls were assigned by someone throwing the alphabet in the air and picking things out at random. They’re actually good… except for the smoothing and negative acceleration.

If you do want to play on controller, then as I said, I’m going to guess you won’t have to deal with either of these. There’s apparently native support for 360, Xbox One, and PS4 controllers too, complete with the correct button icons, so you’ve got a pretty wide selection if you go for that option. I just really don’t want to. I like aiming with a mouse, and I’m willing to manfully struggle against mouse acceleration and the like to get it. 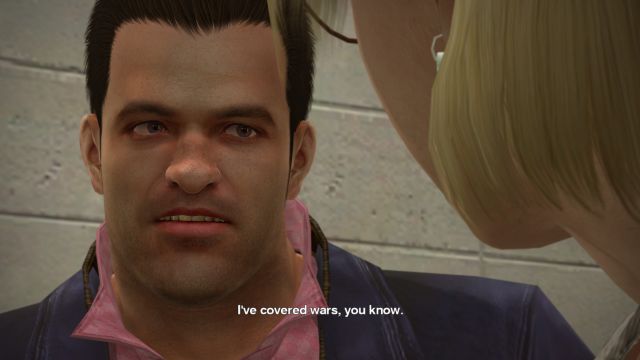 “Alright,” you say, “but I’m going to play on a controller anyway. So it’s fine for me, right?”

Well, maybe. I haven’t tried it out with controller so I can’t comment overmuch, but assuming they kept the exact same control scheme as on the Xbox 360, you shouldn’t hit any major control problems. You might hit the other major problem, though.

The original release of Dead Rising pissed off an awful lot of people with two things – a sole save slot, and a really strict timer. The former has been relaxed, as the PC port offers a full five different slots, so you can always reload an earlier save if you like… assuming, that is, that this doesn’t happen: 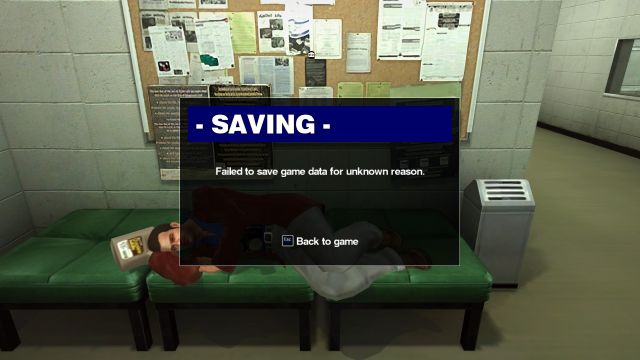 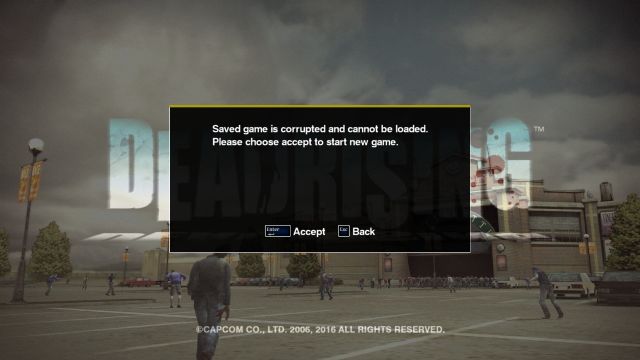 I’ll be honest with you: I’d really rather carry on with my old game.

I don’t know about you, but when I’m playing a game that actually has “be careful when and where you save” built into it thanks to the out-of-the-way save locations and the aforementioned timer, I don’t want to worry about whether it’ll save or if it’ll just corrupt my data. The same goes for a game that relies on dying and starting a new game with that save.

The thing is, I don’t know why this happened, and I don’t know why it didn’t happen again. It might be Windows 10, or permissions, or anti-virus, or bad sectors (unlikely, as I’m definitely not the only one experiencing this), or the phase of the bloody moon. But I can say I don’t really want to play any more until I actually know that this isn’t going to happen again, and this would be my biggest reason to urge you to wait a little bit longer before purchasing. 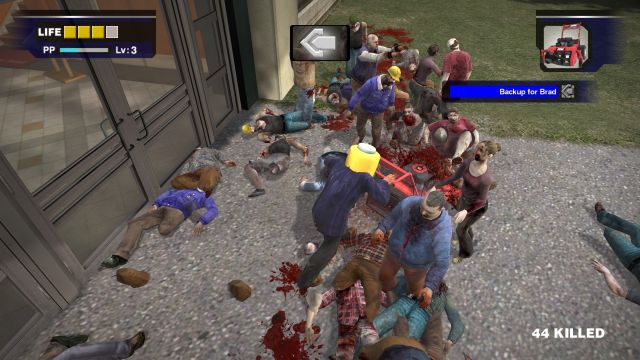 The lawnmower: along with the chainsaw and the shotgun, this humble tool is part of nature’s intended defence against the zombie menace.

Dead Rising itself is a favourite of mine, though I’m quite possibly in the minority there. I liked the “replay from the start with your new skills” mechanic and spent a lot of time tooling around in the mall, rather than trying to complete the main story on my first run-through. I liked the tension created by the timer and the knowledge that a “perfect” run, completing every single Scoop, would be nigh-impossible. I liked a lot of the design elements that an awful lot of people really hated, basically. (Although not the terrible companion AI. That really was bad.)

On the one hand, Dead Rising is a classic; on the other hand, if things like a really harsh timer or a demand that you replay the game a few times before you can finish the story are going to put you off, you’re probably better off with another game in the series. I love it, but I don’t expect everyone to do so. A classic, but a classic that’s a bit of an acquired taste. 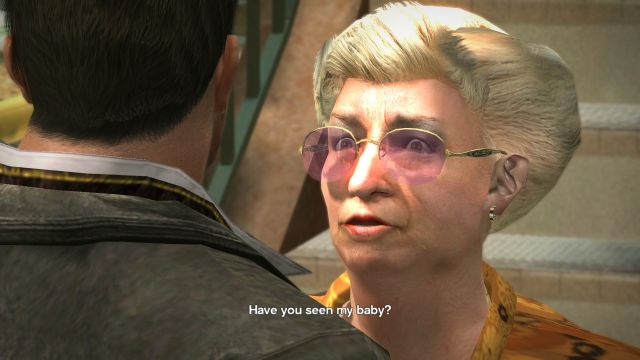 Meet the single most hateful character in the entire Dead Rising series. If she wasn’t so obsessed with her dog…

Still, I’m not really here to critique the game, but to critique the port. Most of the port is great – the optimisation, the low loading times, the solid keyboard controls, the things that can be adjusted – but the groan-worthy mouse issues and the inexplicable save corruption are enough for me to suggest holding off to see if patches remedy these issues. Right now, be cautious and wait until other players start poking their heads up, because right now Dead Rising has nastier problems than just the undead.