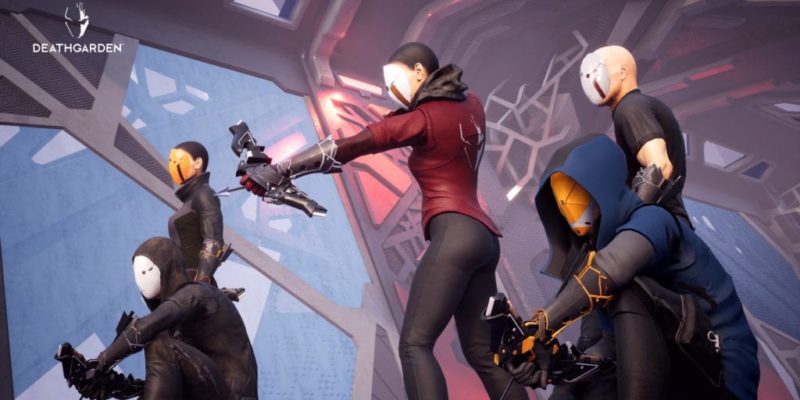 I thought I was in for a relaxing Saturday evening but then the mail came inviting me to play Deathgarden from Dead by Daylight’s creators Behaviour Digital.  My relaxing evening went straight out the window,  the thundering sound of heavy footsteps drawing ever-closer behind me saw to that.

Deathgarden is an asymmetrical multiplayer game where two sides are pitted against each other except one side has five players and the other only one. Five players take on the role of Runners with the single objective of escaping the map by capturing two of three points to open exits. The other player takes on the role of the Hunter who has to eliminate all the Runners. Sounds simple but there are a few interesting twists.

The first difference between the Runners and Hunters is movement. The Runners are agile and can leap around the map and scale walls. The Hunter, on the other hand, is heavy-set and slightly less agile. The second main difference is the Hunter has weapons to kill the runners while the Runners can only use abilities to hinder the Hunter such as stunning him or revealing his location. Deathgarden is a real game of cat and mouse. 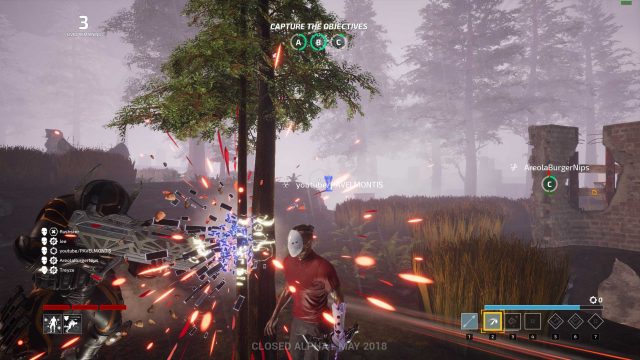 The Hunter can choose two of three weapons which currently include a shotgun, assault rifle, and a sniper rifle. The Hunter also comes with a couple of gadgets, automatic firing sentry posts which are placed and mines. Both of these have cooldowns so they can’t be spammed which means you have to think about where to place these to eliminate the Runners.

The Runners have to work as a team to be effective and players choose one from three types. Control to try influence the Hunter’s movement and abilities, Torment which means they have to try and track the Hunter so other players can see him and generally be a nuisance with delaying tactics and abilities, and finally Support to help keep the team alive. Everyone can capture points but they take a long time to capture and as soon as you step into the capture point you are revealed to the Hunter. The trick is to keep the Hunter moving and distracted to get those points captured. Runners can use tricks like hiding in bushes but as soon as you are spotted the chase is on.

When a Runner is killed they start to bleed out but they can be revived by other players and the more Runners that are active the harder it is for the Hunter to stop them taking the points. The Hunter, on the other hand, is trying to make sure players die and sent to the Blood Post which is a kind of sacrificial altar where players try to rescue them while the Hunter tries to execute them. 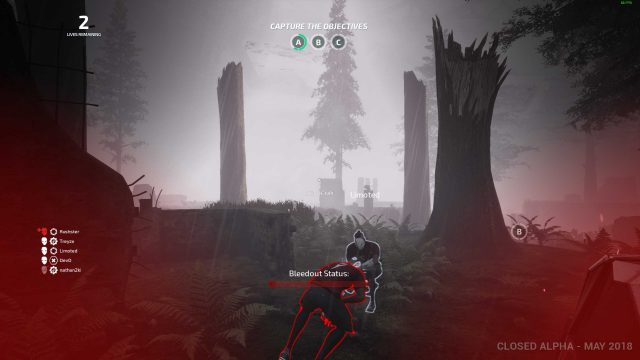 The biggest difference between playing a Hunter and Runner is the perspective. Hunters play in first-person mode while Runners play in third-person. This gives the Runners a slight advantage as they have more vision. Playing as the Hunter it’s easy to miss Runners as they dart around the map and this difference in perspective really adds to the gameplay.

Dotted around the map are crates for more ammo and there are also upgrade crates which both sides can utilise. A Hunter may activate a crate and find their weapon spread has been reduced. The Runners pick up upgrade parts which can be used to upgrade their basic darts at an upgrade point. Any Runner close to the upgrade part box will also receive an upgrade so players often wait until another player is close by so everyone gets the part. There are also health boxes that can be collected to push a Runner’s health back up which are essential to find if you’ve taken a pounding from the Hunter. These can also be crawled to when downed to revive yourself. Runners also need to collect what is called NPI which is ammo needed to use their abilities selected at the upgrade station. The only way to pick up this stuff is to stand within a capture zone which leaves you highly vulnerable, help others, or taking part in other events happening on the map. Runners can also put down markers on key objects which all Runners can see across the map and it’s extremely useful.

If the Runners manage to get at least two of the three points captured it’s a race for the exits but the only problem is that after a few seconds of the exits being revealed the Hunter can see all the Runners on the map as they try to escape. 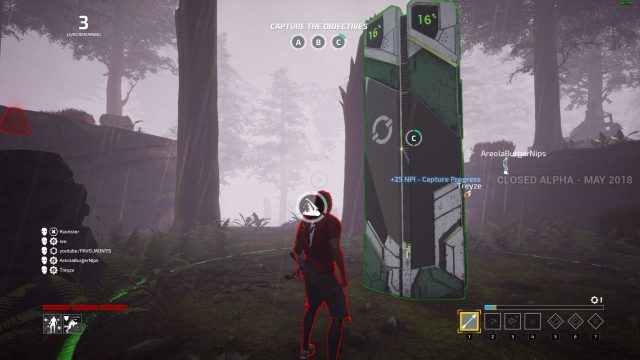 I really wasn’t sure what expect from Deathgarden but I was really impressed with the gameplay. The differences between the two sides are so significant it’s like playing two different games depending on whether you choose to play as a Runner or the Hunter. The game’s premise is simple but there’s a lot to keep an eye on and the pace is absolutely frantic at times whether you’re playing the Hunter or a Runner but most importantly it’s fun.

Right now there is one map and it’s still early days for the alpha but Deathgarden is definitely one game to watch out for in the coming months.  I am still trying to calm down after being chased around by the thudding footsteps of numerous Hunters over the weekend. This is one asymmetrical multiplayer game that could really shine if Behaviour continually mix it up, and with more abilities still to be added, there’s plenty to look forward to.