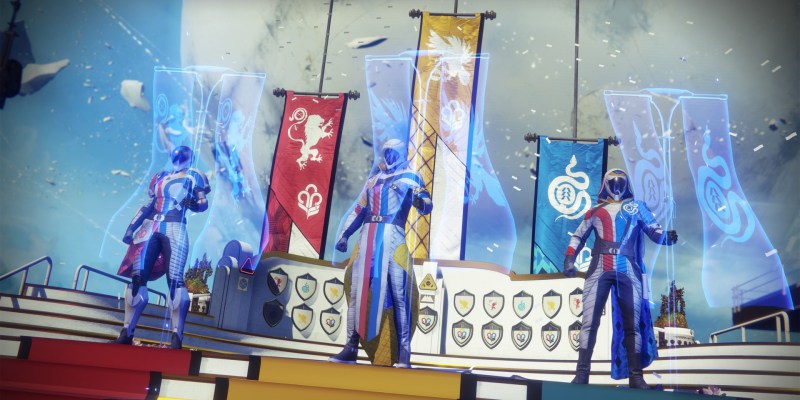 Destiny 2 loves having events during springtime. Last year, we saw The Revelry. This year, we’ve got the Guardian Games. This new event is all about celebrating a competition among Destiny 2‘s classes, because what else brings people together when a gigantic flagship is about to crash land on Earth, right? Ah, anyway, the Guardian Games event will have you completing bounties (of course!) while collecting laurels and whatnot. It’s also possible for you to obtain the Heir Apparent exotic machine gun and several exotic ghost shells.

Note: Guardian Games is available to all players of Destiny 2 regardless of season pass ownership. For more information about the current season, check out our Season of the Worthy guides and features hub. 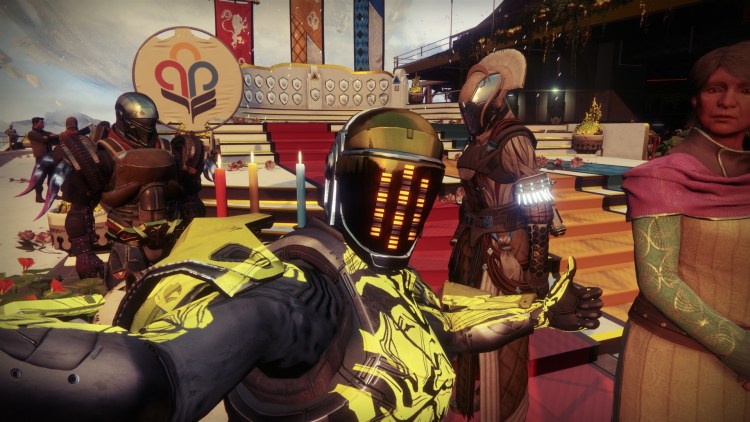 First, you’ll want to head to the Tower which has undergone a makeover for the Guardian Games event (along with new music). Speak to Eva Levante and you’ll be told to speak to Zavala and other NPCs. Once you’ve spoken to Zavala, you’ll get to pick your Guardian Games class item. These come in three elemental flavors and you can still buy different types from Eva.

The class items also have a unique perk called “Spirit of Competition” which nets you additional glimmer and XP by completing various activities while the event’s running. You also need to wear them while doing activities to progress.

Note: Do not use an ornament on your Guardian Games class item. This will cause a bug that prevents you from gaining progress/tallies. 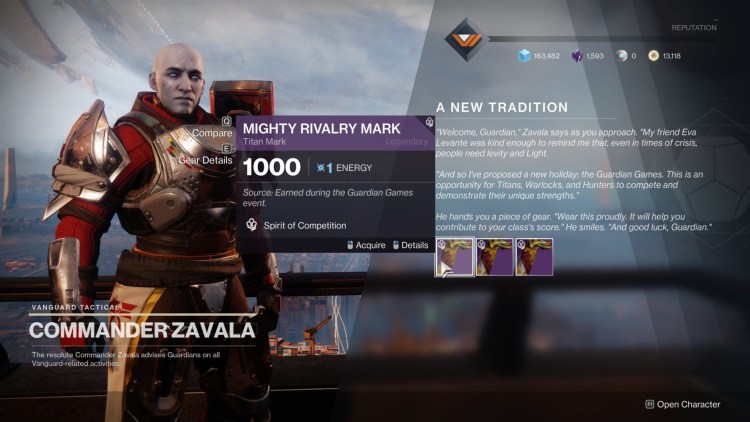 After grabbing your class item, you should speak to the Drifter and then head back to Eva. You’ll be given a medal for your troubles and you can redeem this via the Guardian Games podium behind her. For future reference, this is where you’ll be turning in your completed medals. Doing so will net you maybe a useless legendary or rare, plus, you’ll get to increase the placement of your class. Don’t forget that your class item will change color from bronze, silver, or gold depending on your class’ ranking for the day. 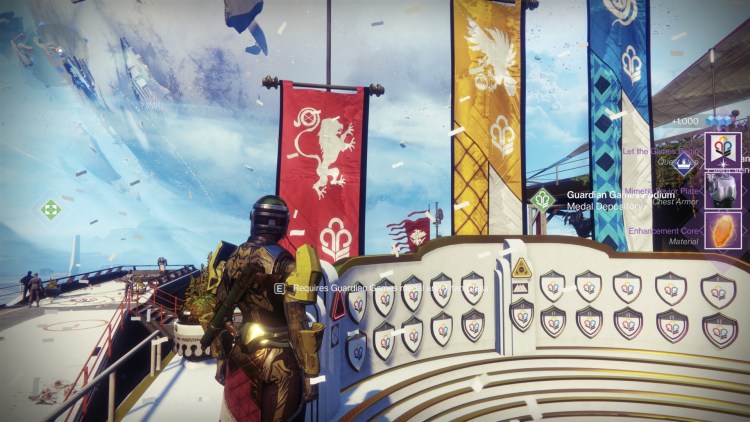 On Your Laurels: Farming laurels and being hardy

You’ll also get the exotic quest called “On Your Laurels.” You’ll need to collect laurels from kills via supers, grenades, and charged melee abilities. What are laurels? Well, they’re tiny motes that are dropped by enemies, and they have a symbol denoting a class too. For the quest, laurels that match your class give 3 points, and laurels for other classes give 1 point.

Completing “On Your Laurels” rewards you with one of three exotic ghost shells. So, if you’re able to finish the quest on all three characters, you’ll have the ghost shells collected already. 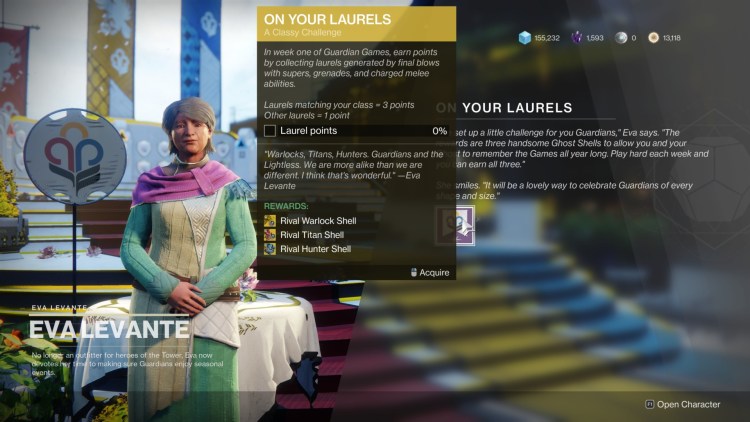 Here are some tips for farming laurels with certain classes:

Update 1: It seems weapon kills while standing in a Well of Radiance also generate laurels (ie. counts as ability kills). It seems Sanguine Alchemy or Phoenix Protocol might be helpful, though this method still takes longer compared to what the punchy bois and sneaky bois can do.

Update 2: Because you’re essentially competing for laurel pick-ups, it’s better to farm solo. You can follow the advice of Destiny 2 YouTuber Lieuwe_berg. All you need to do is head to this week’s Ascendant Challenge and kill Hive thrall:

Anyway, go and check what Eva has to offer. You’ll see that you can obtain the Heir Apparent exotic machine gun after completing the “Class Act” triumph. As for the rest, she’s got the following bounties:

You can also purchase additional daily bounties using glimmer, and these will be dependent on your current class. So, it’s mostly just picking the right subclass and using the correct abilities to complete these. 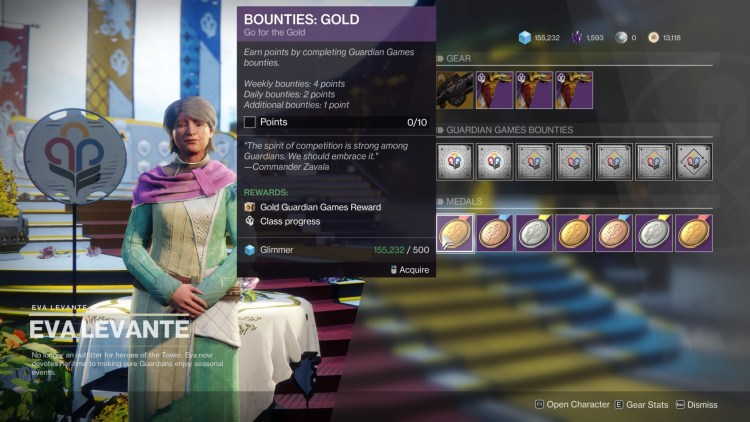 What about the medals themselves? Well, there are multiple kinds but these are activity-specific. The better the medal, the more it’ll boost your class’ standing when you redeem them via the podium. Here are some examples:

The medals for Gambit and destinations aren’t available today, so you’ll need to wait for the daily reset to see if they’re part of the rotation. Ah, just what every Destiny 2 player needs: more reasons to log in every day just to do more bounties. In case you haven’t noticed it, Destiny 2 — which has become reliant on bounty turn-ins — finally gave you bounties for your bounties. Who saw that coming?

Eva also has the “Master Class” weekly challenge which requires you to redeem medals until you get a total of 25 points. Gold medals give 4 points, silver medals give 2 points, and bronze medals give 1 point. Completing this challenge nets you a pinnacle reward to help you reach the power level cap.

Now, if the Guardian Games don’t excite you, then you could always do the other new content this week which is the Grandmaster Nightfall Ordeal. It’s like going from one boring grind to a more punishing and very unrewarding slog. 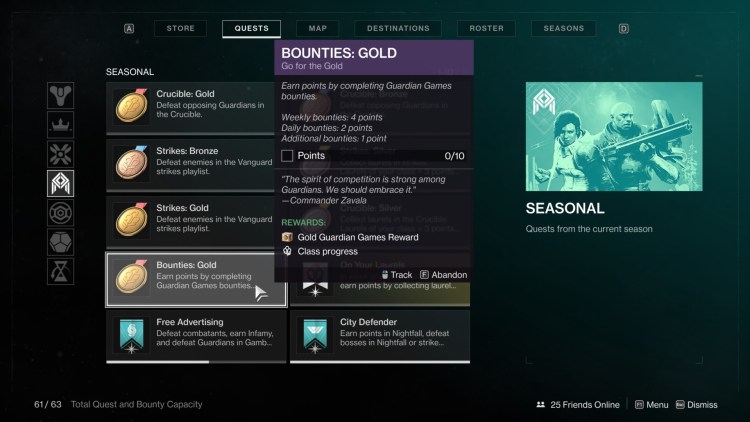 Destiny 2‘s Guardian Games event runs from today until the May 12 weekly reset. You can find the game on Steam. For more information, check out our Season of the Worthy guides and features hub.

The Shattering review – A little scattered