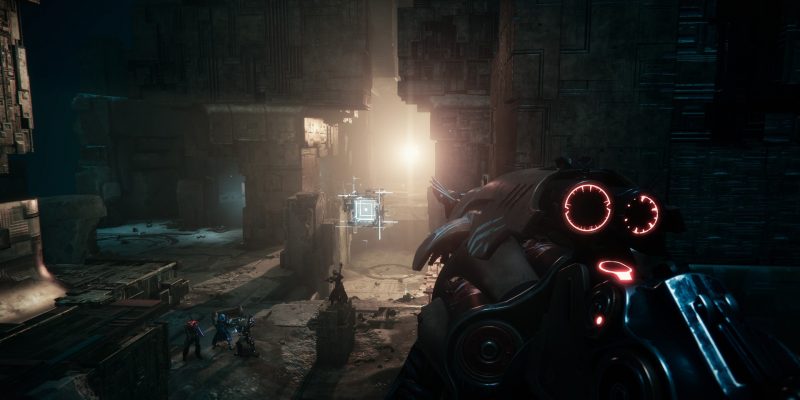 After you get past the jumping section in the Trials of Kabr, you’ll find yourself in a large cavern called the Templar’s Well. Here, you’ll need to complete the Conflux and Oracle encounters which are technically part of the multi-stage Templar fight. These are fairly easy romps that shouldn’t cause too many issues as long as your team is prepared. Still, do remember that the Templar, a gigantic Vex hydra, will still be shooting at you and your teammates if you’re out in the open. Here’s our guide to help you with the Conflux and Oracle encounters in Destiny 2‘s Vault of Glass raid.

In the Templar’s Well area, there are several pillars and a huge gap with more platforms off to the sides. You can’t actually stay on the faraway platforms since a timer will count down and eventually kill you.

Anyway, your objective here is to defend the confluxes (Vex pylons) that’ll spawn. Try to prevent mobs such as wyverns, goblins, fanatics, and Overload minotaurs from reaching the active confluxes. Similar to the Garden of Salvation raid, if several Vex mobs (i.e., around four) sacrifice on a conflux, your team will wipe.

Note: Wyverns and fanatics will create a pool of Vex milk when they die. Stepping in these pools will give you a debuff called the Mark of Negation. If you still have the debuff when the Templar does its Ritual of Negation cast, you’ll die. As such, you need to run to a plate at the bottom of the central area to get cleansed. However, since the cleansing pool will disappear for a while once it’s used, you’ll want to step on it along with other teammates who are also marked. 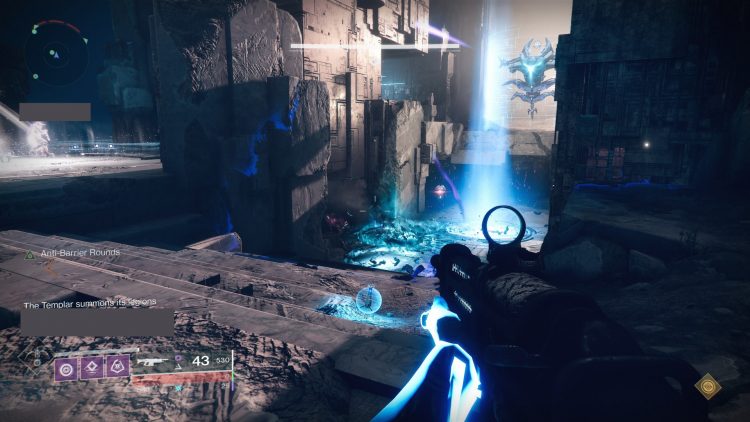 This is how the encounter will progress:

Anarchy is one of the best exotic options here since you can just shoot a few electric grenades at spawn points to kill most mobs that appear.

In any case, you should be done after a short while. You’ll receive your raid/pinnacle loot. 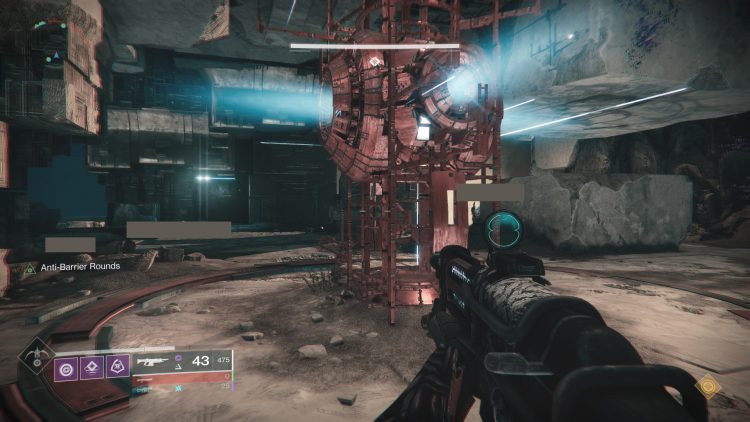 After the Conflux encounter, you’ll have to handle the Oracles. These are light blue entities that spawn on different spots on the map:

The objective is to destroy the Oracles in the order that they spawn. The first set will have three, followed by a short interval, and then four will appear. You’ll need to keep doing this until the very end when seven Oracles spawn in sequence.

Note 1: If you kill Oracles in the wrong order, the entire team will be Marked for Negation. Everyone has to touch the plate at roughly the same time to get cleansed before the Templar does its Ritual of Negation spell. Otherwise, the cleansing pool will disappear and players who are late might end up dead.

Note 2: There are also Vex minotaurs and hobgoblins that spawn. The hobgoblins can be annoying since they’re at the distant platforms and they can easily two-shot you if you’re out in the open. 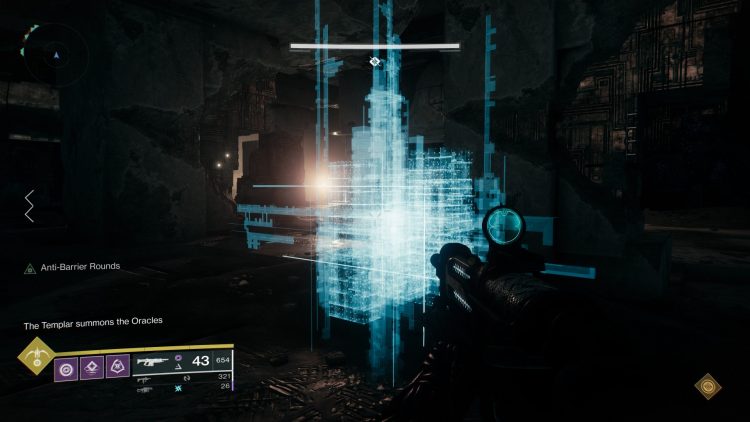 In our team’s case, we decided to number the Oracles from 1 to 7 starting from the back right going clockwise. I also used a small cubbyhole on the right side of the map (seen below).

From here, it’s possible to see the three Oracles on the right side, as well as the ones at the back left and middle left. 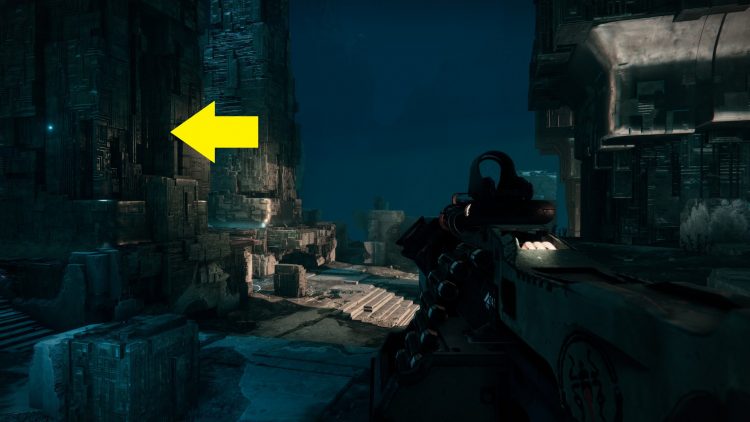 Anarchy and Void weapons are good for minotaurs, though you might need a scout rifle to take care of the hobgoblins. As for the Oracles, they can be easily killed with a single shot from the Xenophage.

If you have one person with line-of-sight on most of them (from the cubbyhole), that player can eliminate most of the threats. Meanwhile, other teammates will just handle the mobs and any Oracles that aren’t readily seen (i.e., #4/middle and #5/front left). 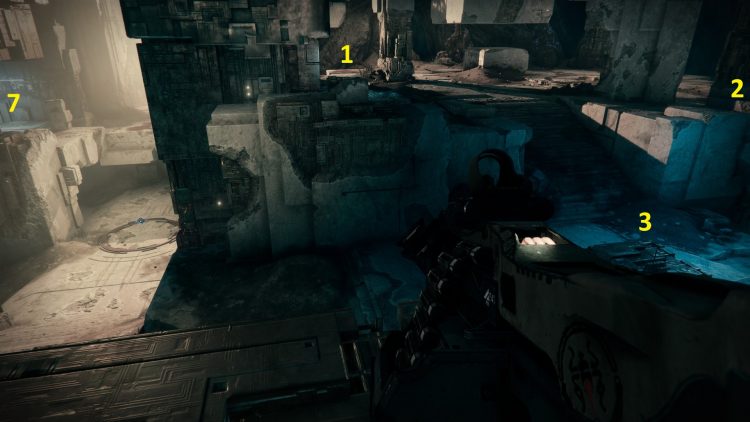 Cheesing using the hiding spot at the ceiling

Another decent hiding spot solely for Oracle killing is at the ceiling. You can reach it by jumping on the pillars at the back of the room. There’s a very thin ledge here that you can climb on until you reach the cubbyhole at the top. 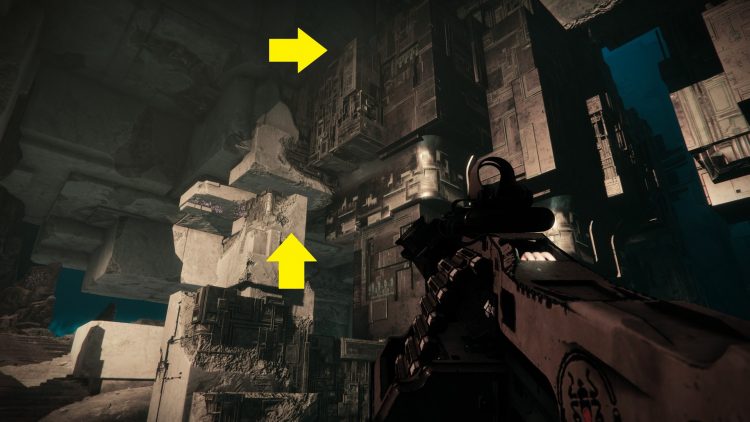 From here, you should be able to see the Oracles on the left side, middle, and bottom-right locations. The ones at the back right and middle right aren’t that visible. You’ll also need to beware of the “death timer” as you attempt to cross from one area to the next.

Anyway, don’t forget, the final sequence will have seven Oracles spawning, so it can be a little hectic. Just clear comms and listen to callouts, and you should be done in no time. You’ll get another chest with raid/pinnacle loot.

All right, let’s go ahead and discuss the next encounter. It’s none other than the Templar boss fight. 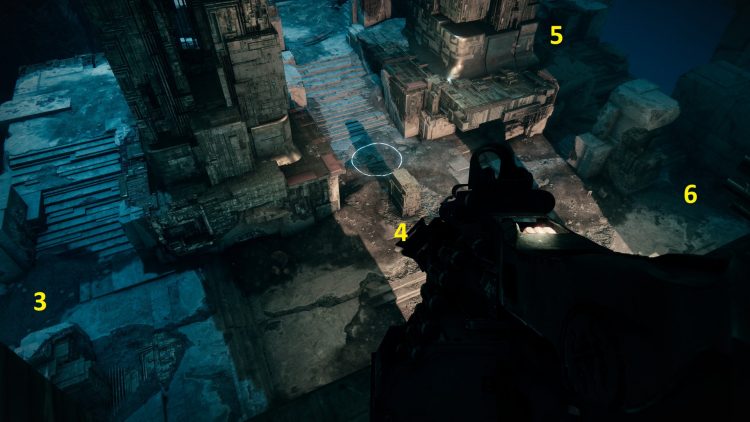 Destiny 2: Season of the Splicer — Vault of Glass raid guide