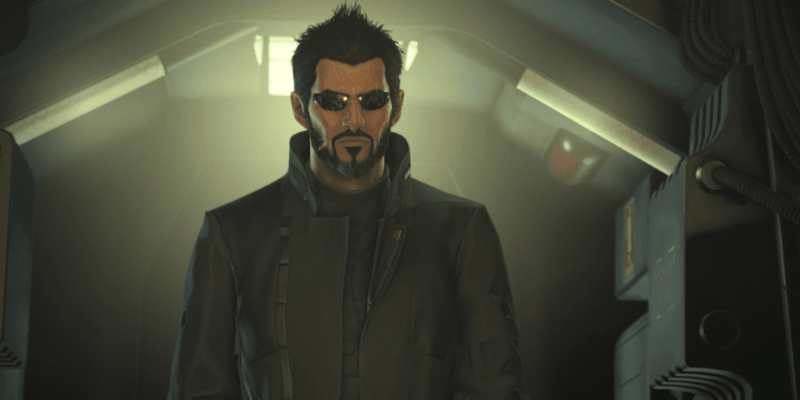 With Deus Ex: Mankind Divided’s release just around the corner (slightly further around the corner on PC than consoles, sadly), it’s time to delve deeper into the PC version than I was able in my review. If you read that already, you’ll know that the Nixxes-assisted PC release is pretty damn good. But could it have been augmented even further? And will there ever be an end to lazy augmentation references in Deus Ex articles? At least one of those questions will be answered.

First of all, whoever figures out a way (or a mod) for skipping the 600 otherwise unskippable corporate logos at the start of Deus Ex: Mankind Divided will be humanity’s true hero. That gets really old. Especially when you’re popping in and out of the game to run graphics benchmarks.

Anyway, before you have to sit through those, you get a good old launcher window. It basically contains the same options as the in-game Display and Graphics menus, but in a more concise format. Let’s have a look.

Pretty much the settings I used throughout the game, there.

Note that DirectX 12 support isn’t actually going to be fully implemented until around 5 September, so that DX12 check probably doesn’t do anything at the moment. I played some of the review build with it ‘on’, but suspect it may have just been loading the DX11 version because performance seemed identical. Incidentally, that means you probably shouldn’t trust any DirectX 12 benchmarks that were floating around pre-release. Unless they had a super-secret insider build I’m not aware of, they were based on precisely nothing.

Here are those same Display/Graphics options above, but in-game style instead. Any images you see in this piece can be clicked for larger versions. 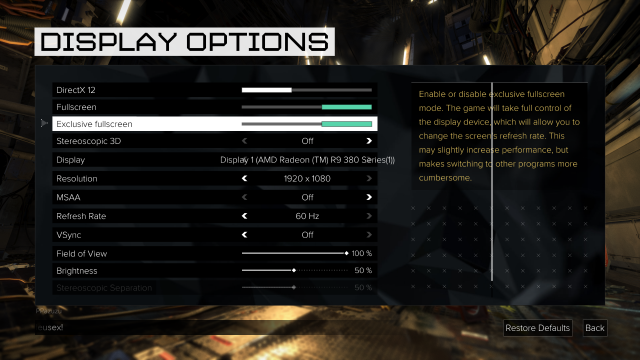 Let’s start with Display settings, which helpfully split Fullscreen (borderless) and Exclusive Fullscreen into separate options and explain what each one means. That’s a recurring theme in these settings. They generally have a sentence or two explaining what effect an option will have on the game.

Deus Ex: Mankind Divided reportedly supports ultra widescreen 21:9, though I don’t have the hardware to test that myself. 4:3 and 16:10 aspect ratios are definitely supported though, along with the usual 16:9 bunch.

This is also the place where you can optionally apply MSAA; but I wouldn’t recommend that unless you have an absolute beast of a PC. It’s the quickest possible way to halve your frame-rate.

V-Sync offers both double and triple-buffering options (as well as ‘off’, obviously), so that’s nice. You may also notice the FOV slider. The difference between the lowest and highest possible FOV is quite startling. Here’s a comparison. 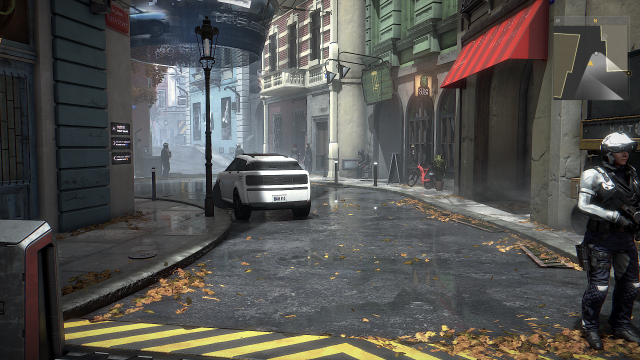 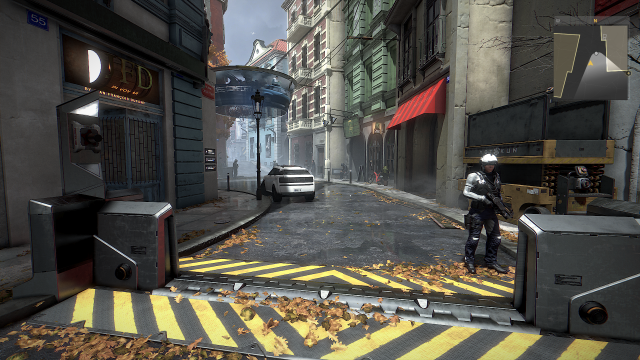 Quite a difference, right? Back to the more specific graphics settings now with a new pair of menu shots. 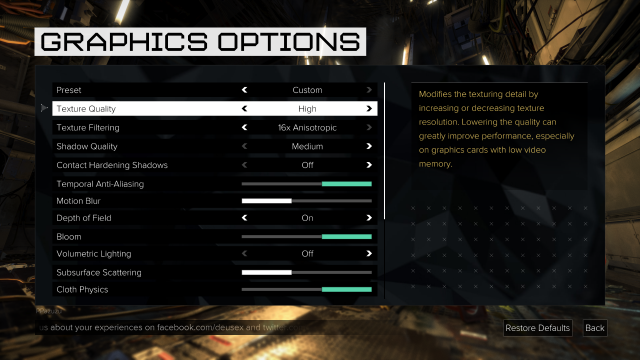 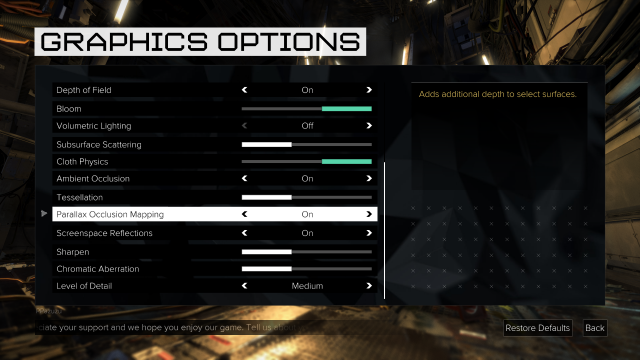 I’m not going to dive super-deep into every single one of these. The extensive variety should speak for itself. As a rule, PC versions should allow you to tweak for both performance and visual preference. Deus Ex: Mankind Divided fits that criteria, allowing you to go bare minimum (low textures, medium shadows, none of the fancy extras) or gobble up all your VRAM on that fancy new graphics card with ‘ultra’ textures (good luck telling much difference between that and high/very high though).

There are also plenty of ‘preference’ level toggles. Motion Blur. Chromatic Aberration. Sharpening effects. Lots of stuff people (rightly) like to have control over. As with the Display settings, the Graphics options provide a short summary for what things like ‘Parallax Occlusion Mapping’ actually do. The only additional thing I’d like to have seen is a rough indication of impact on performance (the Textures setting gives you a warning about VRAM, but that’s about it). Overall though, a very healthy selection of options. Update: Nixxes have written a ‘Performance Tuning’ guide featuring comments on which settings impact performance.

Here’s a comparison between the default ‘low’ settings and default ‘ultra’. 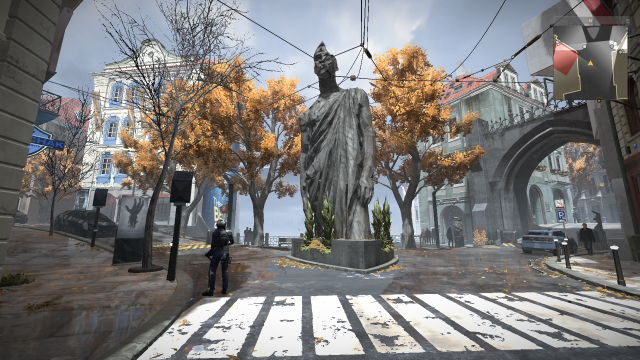 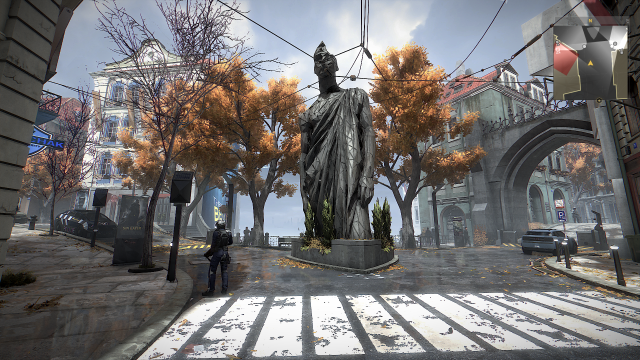 It’s worth saying that the default ‘ultra’ setting does not increase every single value to its maximum possible level of image fidelity. MSAA, for example, has to be selected manually.

That’s worth baring in mind for this set of benchmarks, taken using the in-game benchmark tool. It’s basically a slow pan around a busy segment of Deus Ex: Mankind Divided’s Golem City map, and appears specifically designed to be about as taxing as the game’s Dawn Engine gets. These are all DirectX 11 values, since DX12 isn’t in the game yet. A further caveat: there may be further optimisation from either a release day patch or game-specific drivers from Nvidia/AMD. I don’t anticipate radical performance changes, but if those do materialise I’ll update this article accordingly.

I’m not a tech journo with access to 57 open-bench PC rigs with water-cooled mega-GPUs or anything. This is just a sample size of one: my own fairly ordinary PC (specs above) running at 1080p.

Again, the benchmark seems to be as taxing as possible. Running around in-game was generally less demanding, aside from certain geometrically intense spots in the Prague hub which would tank the frame-rate while (presumably) it loaded in new stuff.

Using what was effectively the default ‘high’ setting with a couple of things like chromatic aberration turned off, the frame-rate stayed pretty reliably above 60 for indoor areas. Busier spots or the outdoors in Prague kept it more in the 45-60 range. During the worst hitches, it could dip to 30 or even the 20s. Testing things on the lowest possible settings I still ran into some stuttering when legging it around the Prague hub, so there may be some sort of frame-pacing or hitches with loading in assets in general.

Fellow augmented agent Tim McDonald has a better PC than me (i7-3820 / 16GB RAM / GeForce GTX 970) and reports better results. “I cranked it up to Very High presets and it was still pretty okay with only occasional framedrops,” he says. “Ultra, on the other hand, gave me about 30FPS in outdoors scenes (and wildly varying FPS at that, so it was really noticeable).”

Basically, it seems wise to take the Deus Ex: Mankind Divided recommended specs fairly seriously. If you’re running it on a system below those specs, be prepared to make compromises on image quality, resolution, or frame-rate.

Loading times are worth mentioning too. They seemed pretty lengthy (above 30 seconds) when loading in the larger Prague hub area, especially for the first time. Other areas loaded in much faster, and the Prague hub also seemed quicker once I was just returning there. 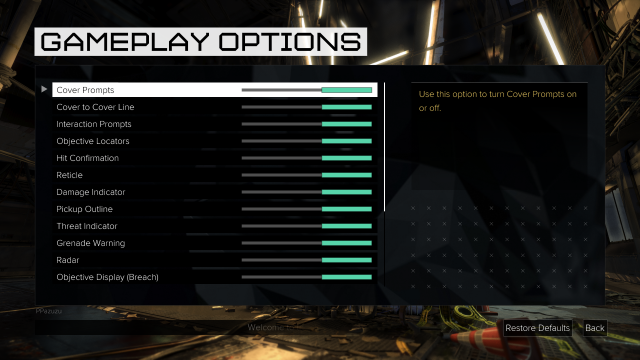 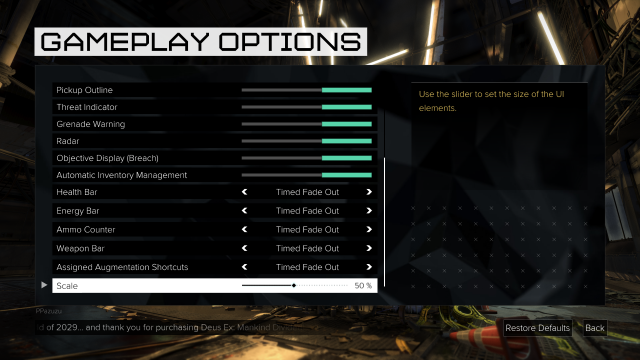 Above, you can see the pretty extensive control you’re given over what the UI and HUD display. If there’s anything about the way the game displays in-game interaction you don’t like, chances are you can switch it off. Things like health and ammo can be set to fade out over time, remain always on, or always be off. There’s also a brilliant Scale slider, allowing you to change the overall size ratio of the HUD information.

As you’d hope for a solid PC version, Deus Ex: Mankind Divided gives you control over mouse sensitivity and keyboard binds too. Update: So, this whole mouse acceleration thing. I don’t know if this is something that changed between pre-release and launch. Or if it has variables where some people (using higher DPI?) are suffering a lot more. Or I somehow missed “literally unplayable™” mouse acceleration while playing. I hope it’s not the last one, because I can usually spot how a mouse should function in a (semi) shooter. Most recently it was clearly borked in Umbrella Corp’s PC release. Anyway, it’s obviously a major issue for a PC release, so it’s at least good to see it already on the list of “known issues” (which kind of suggests a mistake/error to me) being looked at by Nixxes. Definitely something to be aware of until it gets fixed. It has been suggested that having a Steam controller plugged in will massively raise mouse sensitivity – so try unplugging if you have one of those. 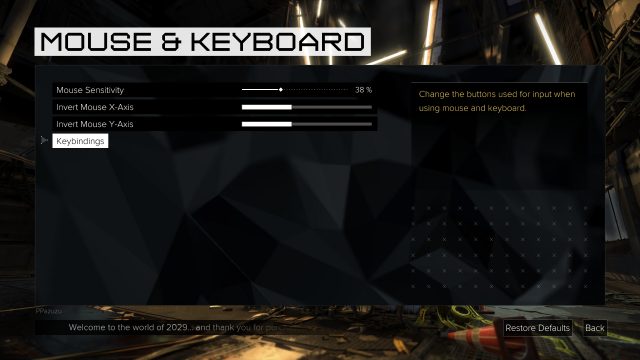 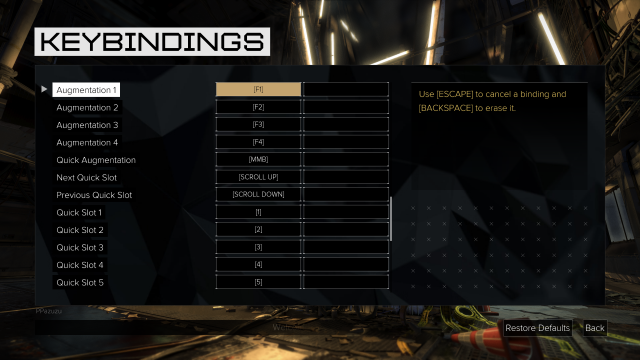 I haven’t tested every single keybinding in every possible combination, but the game allows you to redefine the commands for (as far as I can tell) every action. As mentioned in the review (and I think in our hints), the game has an annoying bug when using Space to confirm a loaded game. Space is also the ‘leave cover’ button, and Jensen will dash out like an idiot. I was hoping that would be fixed for release, but apparently not.

There’s also a very Deus Ex hotkey bar (using numerical keys 1-0 by default) that you can assign inventory items to for quick access. 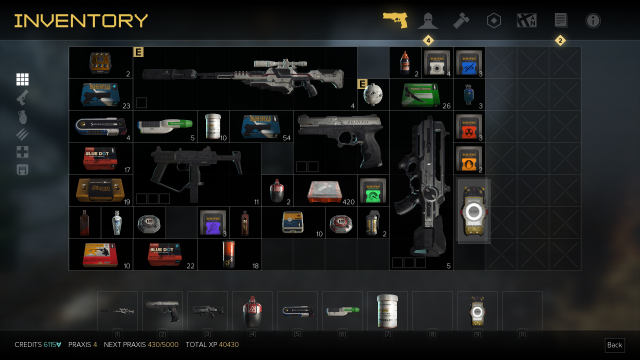 In terms of the breadth of options and settings offered by Deus Ex: Mankind Divided, there’s very little with which to find fault. It caters to a variety of monitor types, has an FOV slider that can expand the first-person view to motion sickness dodging levels, offers ways to alter mouse sensitivity and keyboard bindings, includes PC-specific UI customisation methods, and allows control over a wide range of graphics options for reasons of both performance and preference. With all that, Nixxes have done another splendid job.

Performance, though, is not quite to that same flawless standard. Whether this is a result of how the Dawn Engine handles frame-pacing or asset loading, or is just down to my own PC set-up, some of the hub portions of Prague are heavy on stuttering. ‘Indoor’ level performance is much smoother in comparison, but it’s not purely a ‘raw power’ issue because a certain amount of hub stuttering still occurs when graphics options are all at their lowest. It’s not a show-stopper, and it’s possible that further patching and magical ‘optimisation’ can address matters, but it is quite noticeable. For now, those few lingering performance problems (plus mouse acceleration, as it turns out) keep Deus Ex: Mankind Divided shy of being a gold standard PC version.

If you have started playing, make sure you also check out Deus Ex: Mankind Divided Guide – Hints & Tips for New Agents.