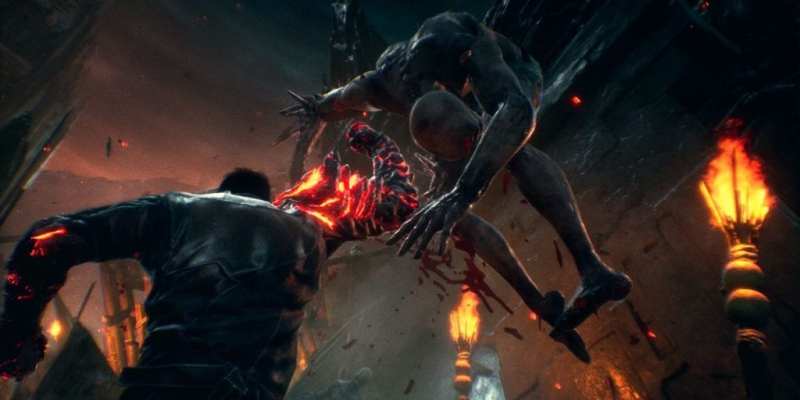 Video game adaptations of books have become increasingly popular over the last few years, especially with the success of The Witcher, S.T.A.L.K.E.R., and Metro. It makes sense. These novels already have extensive lore and proven narratives that yearn for a more visual art form. Author Paweł Leśniak took note, and he created his own studio to adapt his novel Equilibrium into a video game. That effort has led to Devil’s Hunt.

Devil’s Hunt is the first third-person hack-and-slash action game developed by Layopi Games. Did they make a deal with the Devil, or did they breathe new life into a crowded hack-and-slash genre?

Devil may not cry

Devil’s Hunt introduces the player to Desmond Pearce, the son and future heir of a wealthy entrepreneur. He’s truly living his best life, with a beautiful girlfriend finally agreeing to marry him and a burgeoning boxing career about to take off. Alas, a series of misfortunes puts Desmond face-to-face with Lucifer himself – the only one who can restore Desmond’s life back to normal.

If you think this sounds convoluted, you’re absolutely right. As Devil’s Hunt‘s development was steered by its lead writer, I had expected it to at least have a passable story. To my surprise, the game’s storyline would feel more appropriate in a ’90s teen drama than a modern video game. While there are some admittedly interesting and unexpectedly well-written characters, Devil’s Hunt‘s seven-hour campaign is more campy than riveting.

Voice acting is a major strong point for the game, even when the engine doesn’t always match the characters’ words to their mouths. At times, character interactions genuinely captivated me, because voice acting this good feels way out of place in a plot as haphazard as this. 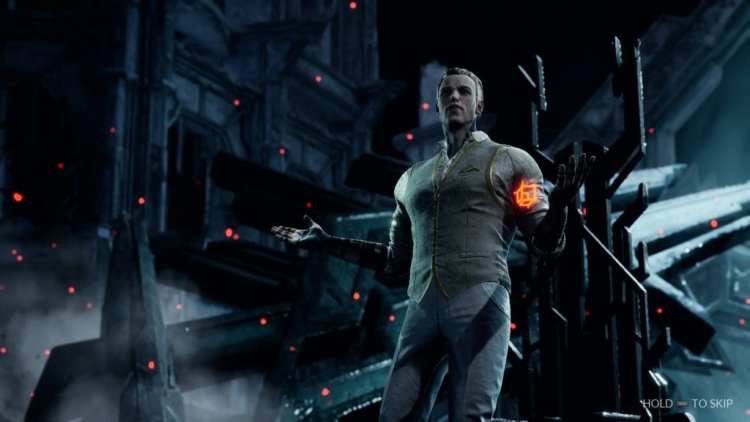 Lucifer’s voice acting performance is one of the narrative’s highest points. Shame we don’t see much of him after the first few levels.

Thematically speaking, Devil’s Hunt discusses the perpetual tension between light and dark, good and bad, and authentic and fake – all to a nauseating extent. At its best, Devil’s Hunt is a magnificent tale of a fall from grace, of the ultimate loss, of revenge, and a chance at redemption. On the other hand, there is a reason Leśniak’s novels average a 2.5/5 on GoodReads, and it isn’t because of thoughtful nuance or character development. Rather, Devil’s Hunt tries to introduce as many plot points as possible instead of expanding on those it establishes early. Character motivations aren’t really clear, and ultimately the main characters are little more than flat and generic – especially Desmond.

Desmond is as shallow as his leather jacket would suggest. Silly one-liners, a lack of emotion, and every generic action-movie trope known to Hollywood reduce him to a hero worth forgetting. This detracts from a story that already sits on the cusp of tolerability.

And if you like closure, stay far away from this game. Devil’s Hunt is strictly an adaptation of the first novel in the trilogy. This means that things end with a big fat cliffhanger to set up the next game in the series.

Your best weapon is yourself

You’ll spend most of your time in Devil’s Hunt slicing through waves of the same enemies, with a few boss battles scattered throughout. While it’s easy to compare the game to Devil May Cry, I think the combat of Assassin’s Creed is more similar. While you’re stuck in the same cramped battlefields as Devil May Cry, you’ll spend less time building up combos and more time evading, parrying, or reversing enemy attacks. 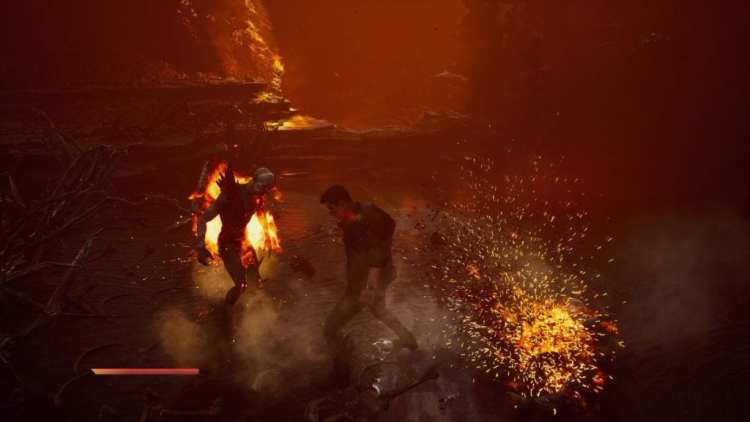 Combat ranges from ridiculously easy to cripplingly hard, but never in a good way

Desmond’s attacks feel sluggish from the get-go, but the game’s fairly comprehensive skill tree quickly allows the player to utilize supernatural powers and devastating finishing moves. These keep combat fresh. Each branch of the skill tree corresponds to one of Desmond’s fighting “schools,” which can be swapped any time using the D-pad.

The “executor” school transforms Desmond’s arm into a fiery demon fist, utilizing brute force to pummel his foes. The “unholy” school allows Desmond to regenerate health or launch luminescent spears from a distance. Finally, the “void” school gives Desmond demonic abilities and utilizes his full power. Additionally, each attack that lands fills up Desmond’s “Demon” bar, which can transform him into an invincible demon with unrelenting attacks for about 10 seconds.

This is all fine and well until you realize that one skill tree lets you literally kill every enemy by holding the left trigger. I’m not kidding – you could either repeat the same four-button combos until you finish off each enemy, or you could rip demon souls from their bodies with one button and get it over with. 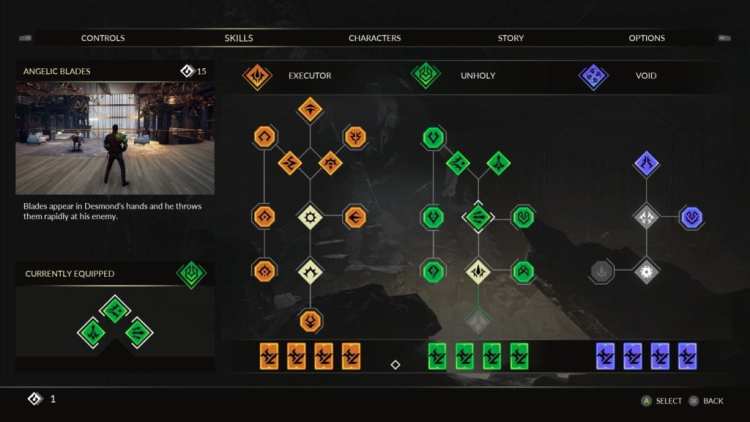 It seems as though Layopi realized this exploit late in development and decided to throw an unfair number of enemies at the player to discourage its use. Several times, I had to replay long sections due to an artificial difficulty brought on by spongy mini-bosses and an overwhelming amount of enemies. Combine this with the omission of a lock-on, and players will quickly grow frustrated by the barrages of off-screen foes.

Despite the three fighting modes, combat lacks complexity, and there’s no real strategy or variation between each enemy type. Each enemy’s attack has an obvious tell, and each skill tree only has 4 button combinations to choose from. This reduces combat to a repetitive loop of dodging and mashing attack buttons until prompted to perform a finisher.

When it works, combat is engaging. When it doesn’t, it’s a monotonous chore that cripples the game’s pacing. 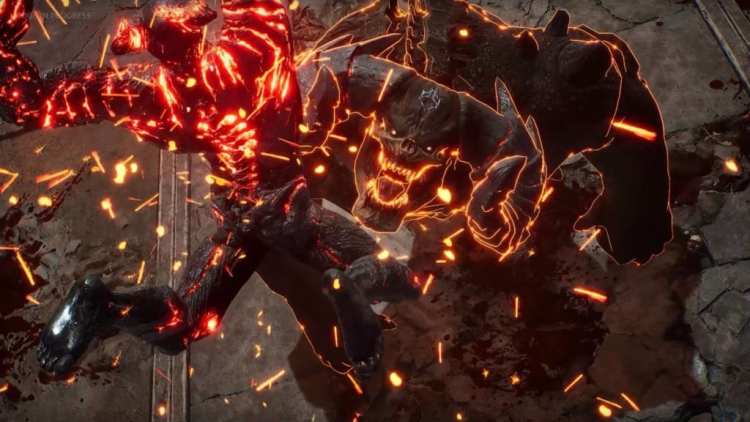 These combat sections are further weighed down by an absolutely brutal traversal system that the developers call “environmental puzzles.” This is not an accurate term for them. You won’t find any real platforming or puzzle-solving in Devil’s Hunt. Rather, you’ll sprint down linear hallways until you find something with the “interact” prompt on it, press “A”… and that’s all you need to solve these “puzzles.”

It’s a real shame, as the core combat mechanics and moment-to-moment gameplay are sometimes genuinely enjoyable. But they are spread too thin amidst such arduous and flat-out boring platforming sections.

Part of Devil’s Hunt‘s allure is definitely its visual fidelity, and there’s a reason for that. Powered by the Unreal Engine, the superbly detailed renditions of Hell pushed my PC to its limits.

I ran Devil’s Hunt on a 1080p variable-refresh monitor with all graphics settings maxed out (except for antialiasing), with framerates varying from 60-80 fps with an i5-9400f, RX 570 4GB, and 8GB of RAM at 2666mHz. Occasionally, outdoor levels would push my GPU’s 4GB frame buffer to its limit, but overall, Devil’s Hunt appears well optimized for lower-end hardware. You could lower the settings to increase framerate, but you’ll want to experience the game’s particle effects in all their glory. 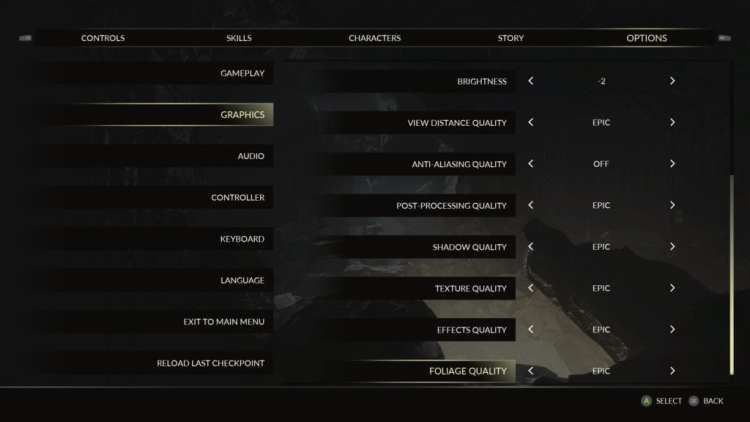 Combat sections are permeated with glowing sparks and flying particles that are consistently stunning. From an artistic standpoint, the red-hot glowing particles contrast beautifully with the deep blacks of its demons characters, and I was shocked at how well done certain chapters looked. Specific levels (especially those shown off in promotional materials) are also quite imaginative, especially the sections set in the depths of Hell.

However, levels that take place on earth are markedly generic and bland. Levels also have a substantial amount of copy-and-paste, and you’ll soon grow bored of returning to Desmond’s Miami apartment. 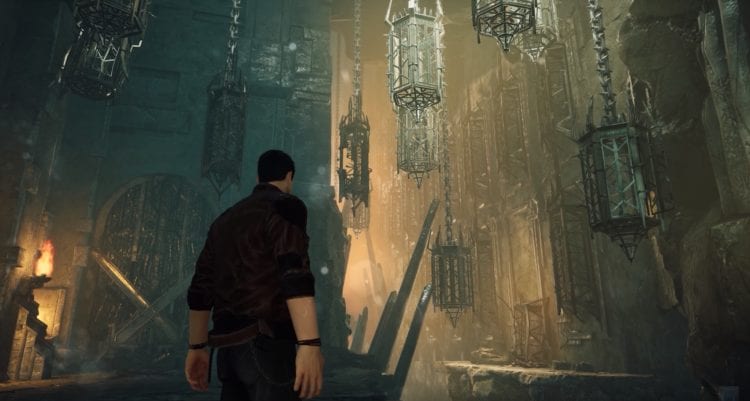 It’s unfortunate that much of Devil’s Hunt lacks the polish of the modern titles it seeks to emulate. From a technical perspective, animations are sometimes off – like, way off. Desmond’s face never moved to express dialogue or emotion. The supporting cast is much more visually compelling, specifically those residing in the underworld. The texture and animation of characters like Lucifer and Agares rival some of their AAA counterparts, but they lack the screentime needed for us to fully appreciate their glory.

While we’re talking about technical issues, I should mention that I was unable to play the game with a mouse and keyboard. Inherent mouse acceleration and wonky movement made it impossible for me to progress. This game was clearly developed with a controller in mind, which is weird considering console ports won’t release until January. This isn’t to say that you couldn’t play the game as God intended, but your enjoyment will be severely diminished.

It’s important for me to clarify one thing: Devil’s Hunt is an indie game. Screenshots and trailers may give it some semblance of AAA production value, but this couldn’t be further from the truth. Hence, Devil’s Hunt suffers a lot of the growing pains attributed with other indie releases – specifically, its inconsistency.

The pacing of Devil’s Hunt fluctuates heavily throughout the story. Sometimes, an especially long cutscene will slam the player with an overwhelming amount of information. Other times, an exhausting number of especially difficult enemies will be thrown at the player, long-removed from a checkpoint. And the repertoire of introspective and beautifully-performed dialogue segments are overshadowed by awkward one-liners from its leading man.

Visually, the interesting and detailed depictions of the depths of Hell are broken up by clear asset-flip levels designed to pad the length of the story. Not to mention the breathtaking particle effects, which look awkward next to tepid animations. 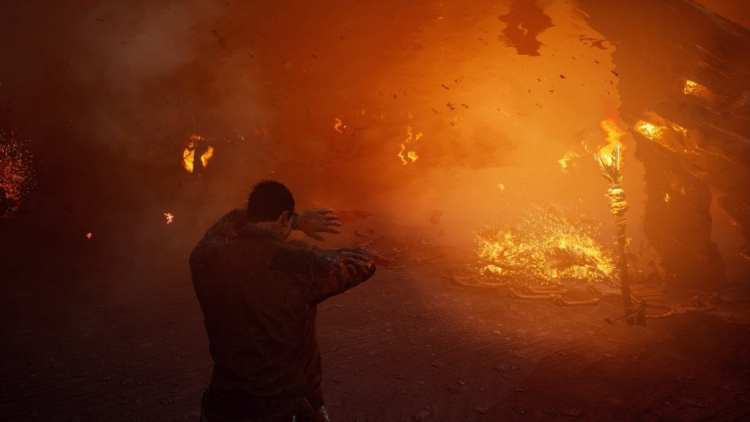 It’s unfortunate that so much of Devil’s Hunt is overshadowed by its lack of polish. Somewhere beneath its gawky surface is a game that I wish I could recommend. But until Layopi buffs out some of the annoying bugs and technical weirdness, and maybe adds a bit of content, it’s hard for me to recommend Devil’s Hunt – especially at full price. The game feels more like a proof of concept than a finished release. With much more complete alternatives out there (Devil May Cry 5 comes to mind), there’s little reason to grab Devil’s Hunt unless you’re a big fan of Leśniak’s novels.

If you want to make a deal with the devil, you can find Devil’s Hunt on Steam.

Devil's Hunt's weighty combat and at times beautiful visuals are plagued with inconsistency, and lack the level of polish of the titles it borrows from. The result is an unfulfilling teen drama whose flashes of brilliance aren't near enough to justify it's $35 price tag.

Session Early Access impressions: All that and a bag of tricks