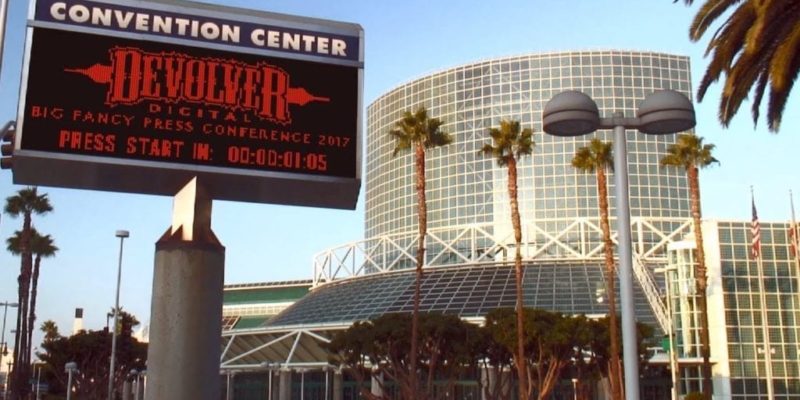 If you haven’t already taken fifteen minutes or so to watch Devolver Digital’s absurdist “Big Fancy Press Conference,” you should do so now.  You might love it, you might hate it, but either way, Devolver Digital has delivered something E3 is in sore need of: self-awareness. However, rather than being a wet blanket designed to snuff out any enthusiasm for the event, they did it in a hilarious way that gives us some perspective on E3 without killing all the fun. Check it out below before reading on.

As you might have guessed by now, I loved this so-called ‘press conference’. In reality, it’s a pre-recorded skit, better compared with something like Mr. Show, Comedy Bang Bang, or Kids in  the Hall. And as a fan of absurdist humour, I thought it was great as a comedy piece. We might disagree on that, but it works even better as a piece of satire, mocking the many faults of the gaming industry, the gaming media, and shows like E3 all within the span of fifteen minutes (and there’s even a couple of games in there!).

You might be tempted to dismiss the whole thing as a troll or the streaming video equivalent of a Reddit shitpost, and you wouldn’t be entirely wrong. But that’s part of its brilliance. The fact that it was advertised as a conference at E3, and that it formed part of Twitch’s main E3 broadcast gave it far more impact as a piece of satire than it would have being posted or broadcast at any other time. By being not only broadcast between the major E3 conferences, but as part of that E3 conference line-up by a company at E3, it allowed the satire to blast the exact audience at which it was directed.

And it was directed at a lot of people for a lot of things. Right off the bat, Devolver takes a couple shots at itself. It opens with one group of streamers refusing to cover the conference because it’s just a bunch of indie games, and another one talking about how Devolver is “finally a real publisher,” presumably because it now has a “Big Fancy Press Conference.” Of course, that’s also a shot at the ridiculous amounts of money thrown around for marketing in the AAA industry. But the joke about Devolver just showing its most successful game again, Hotline Miami, is a fairly pure bit of self-deprecation.

The real satire begins as we jump into the show proper with a title screen that proclaims “Tomorrow’s Unethical Business Practices Today!” As it turns out, this is a major theme of the whole show, taking aim at micro-transactions, early access, pre-orders, and every other way the industry tries to put its hands in your wallet. After all, we get to see a new technology that allows you to literally throw money at the screen to pay Devolver (which will also take your arm off if you aren’t careful).

Of course, much of this conference is aimed at the consumers themselves, who often seem only too willing to pay for things sight-unseen based only on empty promises. Our rapidly mentally-deteriorating host Nina plays this up when she asks tells the audience that they’re doubling down on Early Access (a “powerful tool for developers and fans”) by creating Earliest Access, which is a “revolutionary way to hastily rush unfinished game content out to consumers” by allowing consumers to pay for a game the moment a developer first conjures that game into her imagination. This proves a bit too early for Japanese developer Suda51, who hasn’t even heard of Devolver, let alone thought of making a game with them.

The press takes their lumps too. As Nina Struthers walks out, the (fake) crowd of games media won’t stop applauding until she chastises them as supposed “professional journalists” and fires a gun seven times into the air. The message is clear: this is the enthusiast press where the lines between professional journalists, rampant fanboys, and corporate shills are easily blurred. This is played up with frequent cutaway shots to the crowd laughing along and eating popcorn as though the conference is just another bit of consumer entertainment and the games press are nothing more than regular fans. And of course, the crowd cheers when she straight-up tells them that the whole thing is just designed to convince them to give Devolver their hard-earned money. The point is obvious, but needs to be made: separating consumers from their money is the entire purpose of the video game industry.

Finally, just before the show ends, Nina reveals Comment Created Content, in which a game will update in real-time based on (even “half-assed”) consumer complaints and comments: “want a narrative-based platformer about lost love with sixteen-player online deathmatch? Fire away bruh!” Devolver here takes aim again at the whole consumer response ecosystem, full I suppose of armchair developers salt-induced rage. Of course, it’s hard to find fault with taking consumer feedback seriously, so the joke only goes so far before Nina’s head explodes to raucous applause in a mental breakdown of hype and enthusiasm while repeating “future’s future” over and over again.

Even the over-the-top violence plays into the satire, joking about the ultra-violent nature of many video games and a nod to the debate about normalizing violence, especially with kids. Both as Nina fires her gun, and as a fan sprays blood from his amputated arm, there’s a great little cutaway to a mom laughing and pointing it out to her kid in the audience. No one cares about his lost arm, or Nina’s head exploding. It’s all part of the show, part of the fun.

And that doesn’t even cover all the craziness. There’s mocap suit guy, the Dave Lang Memorial Convention Centre callout, the fake trailer for Super Self-Concerned Burrito, and probably lots more. But it doesn’t matter whether you get all the jokes (I certainly don’t), or even find them all that funny, Devolver’s conference was in itself a huge and hilarious troll of the whole E3 extravaganza.

If it has a single message, it’s a reminder to be a bit more skeptical of the rank consumerism of the event. This is, after all, a show for massive corporations to push their wares on consumers through a largely sympathetic press. It’s a show where indie titles are relegated to a small section of the show floor, and where, until this year, the average Joe couldn’t even pay to get in. It’s not an event like PAX that connects developers with players; it’s mostly one way messaging, false enthusiasm, scripted conversations, and cringe-worthy attempts to appeal to the masses.

There’s nothing inherently wrong with that, and E3 can legitimately be a ton of fun. It only becomes a problem when the media and the consumers are tricked by the concerted marketing buzz and spectacle and begin to buy into the corporate hype-speak. That’s when those unethical business practices can become the norm.  Devolver Digital’s Big Fancy Press Conference was the perfect shot in the arm for those concerns. It was a wet blanket on the worst parts of E3, without killing all the fun. It reminds you to enjoy yourself without buying-in too much.

And sure, Devolver isn’t being altruistic. It’s a comparatively small publisher of indie games, so it’s a bit of an outsider, and perhaps it isn’t fully mocking itself. And their press conference was almost certainly in their own financial interest as a fantastic promotional vehicle. But none of that detracts from the content of Devolver’s message. In a way, it’s one of the only companies that could deliver it in the way it did. It was much needed, and it was perfectly delivered.

So if you’re tempted to call it a troll, go ahead. It was. But don’t dismiss it for that. It was the best kind of troll: the one with a good message for everyone being trolled.