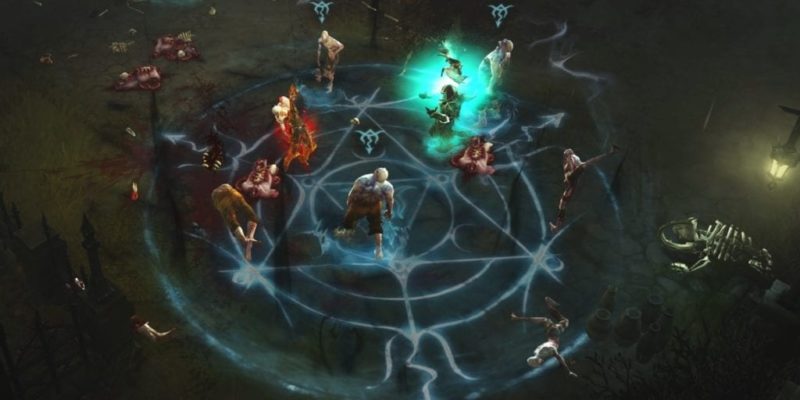 Diablo 3 has sold incredibly well for Blizzard, and while not all of the enthusiastic Diablo fanbase thought it was a step-up from Diablo 2, there are plenty of players that still enjoy the game despite its flaws.

When Blizzard decided to pull the auction house their immediate Diablo 3 revenue stream dried up. The game was also in a bit of a mess before they knuckled down to eventually try to fix the itemisation. After some work, they improved the game as best they could. Diablo 3 got one expansion pack, The Reaper of Souls, and there were plans for more. But following the drop in player numbers, increased competition in the ARPG space, and the removal of the auction house revenue stream, any further full expansions were shelved. A real shame.

Blizzard is not done with the game, however. They know there’s still a solid Diablo fan base and they need to keep them enthused because a fourth Diablo is thought to be in the works. Enter the Necromancer Pack, a great way to show their fans Blizzard has some interest in the franchise; a franchise which deserves more of their attention.

The Necromancer Pack is essentially the addition of one of the most popular classes from Diablo 2: the Necromancer. Blizzard has taken the core of that Diablo 2 class, but tweaked it to fit into Diablo 3.

This is the first non-expansion piece of Diablo 3 paid-for DLC, and costs $15. What do you get for that price? Well, first of all, there are no new maps or dungeons at all. The Pack is simply the Diablo 3 Necromancer class, a pet, two stash tabs, two character slots. a portrait frame, banner and sigil. While the extra tabs are nice the cosmetic stuff doesn’t add a whole lot to the game, so $15 is quite a lot to ask considering you are running the exact same levels.

Blizzard released the Necromancer Pack at the same time as 2.6.0 which was a smart move because there are improvements to the game in this patch as well as three new zones. However, everyone has access to those so don’t get confused with what’s in 2.6.0 and what the Necromancer Pack actually is. 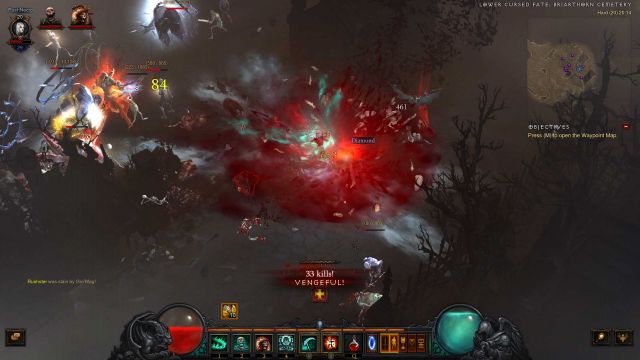 The Necromancer class will be hugely popular, mainly because Blizzard has gone over the top with some of the skills. A case in point being Corpse Explosion. Blizzard know players love exploding stuff, but they may have taken it to the extreme here. Corpse Explosion is completely mental and turns the screen into a complete mess. There’s stuff exploding everywhere, and, coupled with everything else that’s going on in busy areas, it sometimes feels like visual overload.

Essence is the Necromancer’s main resource, and it doesn’t automatically regenerate. This means that the Necromancer has to play an active part in combat in order to replenish it. The summoning of skeletons and Golems plays an important role in the Necromancer’s arsenal, and Essence is required to summon these minions. Consequently, it needs to be topped up and harvested from enemies by whacking stuff with a Scythe or using Bone Spikes early on. The other difference with the Diablo 3 Necromancer is that health is used on some skills instead of Essence. You need to get the balance right depending on which skills are picked.

There’s definitely an attraction to raising an army and the Necromancer can do that very early on while levelling. It’s not long before regular skeletons and skeleton mages are fighting by your side. The Necromancer also comes with a few curses and bone related skills; it’s pretty much what you would expect to see in a Diablo 3 version of the class. I suspect most players are going to be keen on popping out different types of Golem whether it be Flesh, Ice, Bone, Decay or Blood, or raise a skeleton army with Army of the Dead. The more shambling allies on-screen the better, and the more chaotic it becomes. 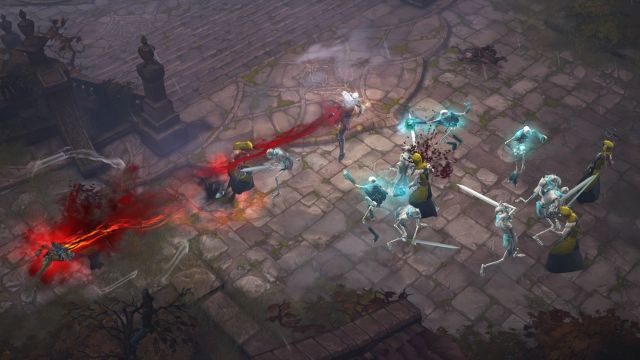 While I wasn’t expecting loads of new game content with this Pack, it does feel a bit like a cash-grab. I know there’s no way for Blizzard to fundamentally change Diablo 3 now, but deep down I really did want to see more story aspects for Diablo 3. With no new dungeons, it means running the same areas and Rifts, but with a new class, for the price of $15. Some players will be excited by this while others will have wanted some new maps and story to play. Though it’s perhaps more likely that those latter players have already moved on from the game.

A new story arc or major level expansion for Diablo 3 is unlikely to ever happen now. Blizzard appear pretty much done with the game. Perhaps if this pack sells well they may add another class, but that’s likely to be it. Until the next Diablo game appears, which is rumoured to be in development, this pack should at least keep some fans engaged.

There will be plenty of players loving the Diablo 3 Necromancer, and at the end of the day, if the majority people still playing Diablo 3 are happy with what’s included then that’s what matters. The Necromancer is reasonably enjoyable and, if you’re satisfied with Diablo 3 and all you want is a new class, then you can probably come to terms with the $15 price.

Worth picking up if you're one of the remaining hardcore Diablo 3 fans, but it's a little pricey for what you get.

Rift’s Prophecy of Ahnket is now free, Celestial Storm due in July