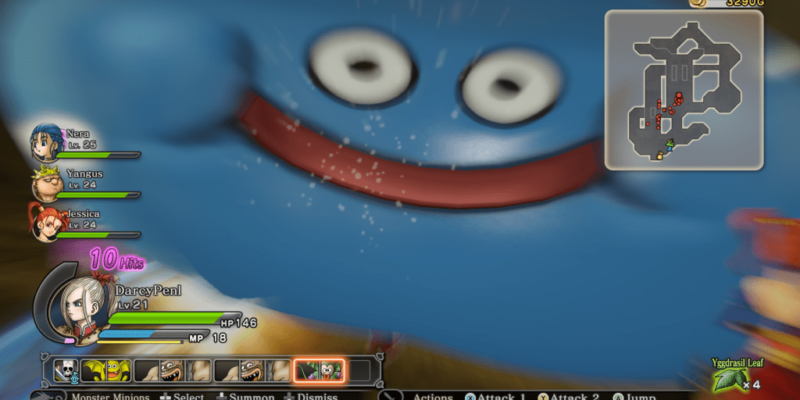 I know you’re all expecting a review here, but … words seem almost meaningless after seeing that image above, don’t they?

Alright, no, you’re right, I should still do the review. Dragon Quest Heroes (or Dragon Quest Heroes: The World Tree’s Woe and the Blight Below if we’re getting all formal) is a collaborative effort between rights-holders Square Enix and Dynasty Warriors developers Omega Force/Koei Tecmo. It fits into the same sort of niche as Hyrule Warriors or One Piece: Pirate Warriors; an existing series given a thorough, Musou-style Makeover.

That’s not quite the whole picture, because Dragon Quest Heroes deviates from the ‘pure’ Warriors traditions in a few interesting ways, but it certainly ticks the box marked “wading through hordes of monster chaff with straightforward combos and overpowered abilities”. 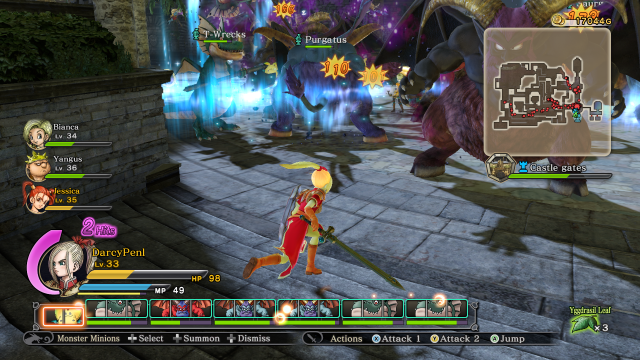 Just look at that mini-map. Beasts all over the shop.

Incidentally, if you’re just here for port impressions you should have a look at this earlier piece. Short version: It’ll be satisfactory for a lot of players, but seems to require more power than it really should to brute-force 60fps, and caps out at 1080p/60fps. Controller is also recommended, though the keyboard/mouse commands can be rebound from their (pretty awful) defaults.

To set my stall out a bit, I’ve never played a Dragon Quest title before this spin-off. I know they’re party-centric RPGs with turn-based combat, but before playing Heroes I didn’t know any of the characters, back-story or any of that. I am pretty familiar with Koei’s Warriors games (especially since they’ve started showing up on PC again), so that’s the perspective you’ll be getting here.

Coming absolutely fresh to the Dragon Quest world didn’t prove to be too much of a problem. I’m sure some of the character appearances and references will be much more meaningful to long-term fans of the series, but there’s also something to be said for being thrust into this colourful world of bizarre creature designs as a total neophyte. That way, you just have to kind of accept the absurdity of gigantic smiling smile monsters. The story is extremely easy to follow, so it doesn’t rely on any prior series knowledge whatsoever.

People and monsters were living in harmony. Then a terrible DARKNESS event occurs and the people and monsters are fighting. That’s your premise. Off you go. Don’t dwell too long on what will happen when you inevitably save the day and your heroes have to live with the consequences of slaughtering thousands of previously beloved, friendly monsters. Just know that the Dragon Quest Heroes therapy union is going to be doing very well for itself. 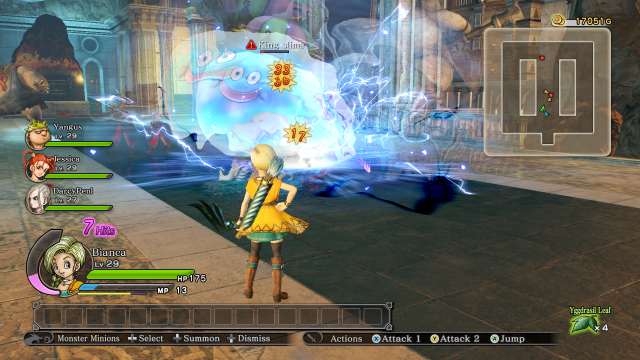 Just look at this callous disregard for monster life.

Levels are smaller than you tend to find in a Warriors game, but none of the Dragon Quest Heroes characters own a horse so covering distance in wide spaces isn’t exactly their strong point. Default run speed is just slow enough to be a bit annoying when you desperately need to reach somewhere; though later in the game your protagonist (either the strategic-to-the-point-of-obsession Luceus or the more immediately pragmatic Aurora) gets an ability that can warp them to specific points of the battlefield.

There’s also much more emphasis on tactical positioning than I’m used to from this sort of title. Around half of the quests have a light Tower Defense aspect where your heroes are tasked with making sure an important gate or portion of the World Tree doesn’t fall foul of attacking monsters. Rather than plonk yourself in front of the objective for the whole mission, though, time needs to be split between point defense and actively going after the ‘Nightmaw’ openings spewing creatures into the world.

You can’t be in two places at once, so you either have to leg it back and forth between places of importance (which makes the tighter maps a mercy), or deploy some friendly monsters of your own. Not too far into the game, you gain the ability to collect a limited number of Monster Medals periodically dropped by defeated foes. Pop these guys out at a choke-point, and they’ll do a pretty decent job of holding it while you get to work elsewhere. 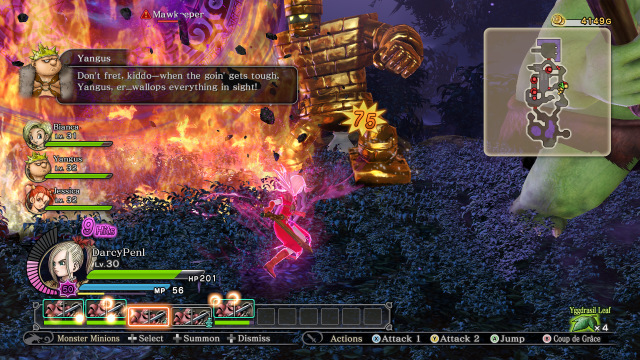 Meanwhile, your heroes can clear up everything else.

The difficulty curve in Dragon Quest Heroes is pretty gentle (especially if you’ve played any Musou games before), but 8-10 hours into the 20-ish hour main campaign it does start tossing out some maps and bosses that require some actual positional tactics. You’ll have to think about where best to focus the attentions of your heroes, or learn how to pull off successful blocks against a particularly hard-hitting foe. Post-campaign, the game throws a whole bunch of new character quests at you, and some of the optional bosses it introduces will require you to be absolutely on top of your game or face death in about two hits.

Whether you’re defending a specific point or not, your minute-to-minute activities will involve slashing (or spellcasting, or whatever) through waves of fairly inept monsters, with the occasional mini-boss style ‘big guy’ thrown in. Fairly simple combos build up your Tension Meter (Dragon Quest Heroes’ Musou Gauge equivalent) which, when full, can unleash a character’s ultimate attack. Every character also has a set of four, mana-powered abilities (unlocked, along with health boosts and other useful skills, on an RPG-style upgrade tree) to match their role and personality.

Naturally, they shout out these abilities by name (“Frost slash!” “Rain of pain!”) whenever they use them. It’s that sort of game.

As mentioned, the main plot is almost aggressively generic in its choice of themes (light vs dark, friendship vs selfishness, sharp object vs squishy bits of monster flesh), but it does much better with a varied roster of characters who each have something distinct to offer in their play-style. Once you’re beyond the tutorial levels, Dragon Quest Heroes approximates the party-based RPG style of its source material by letting you take three companions along with your protagonist of choice. 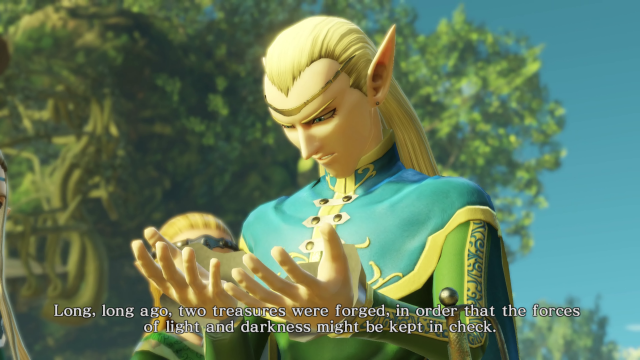 During missions, you can switch between these four characters at will. This is something you’ll actually need to do as the game gets tougher, forcing smart interplay between abilities and judicious use of the Tension power. By the end of the game, for example, I’d settled on bringing along Jessica (for her group heal skill and Magic Burst ability), Cornish archer Bianca (who can put monsters to sleep and deal area-effect damage to the same spot), and “legendary bandit turned ‘ero” Yangus: a burly, cockney fella with a massive axe.

For particularly stubborn monsters, I’d lower their defenses with Yangus’ ‘Helm Splitter’ attack, then either try to freeze them (Aurora’s frosty skills) or put them to sleep. Once locked in place and vulnerable, I could whack away with Jessica’s whip, or one of the other characters, until the Tension gauge was maxed out. Then I could administer a sound drubbing to anything in the local area.

That’s just one example of co-ordinated party behaviour. Plenty of the others have group buffs (Kiryl, Doric), glass cannon-like powers (Nera), or a great deal of damage potential (Alena, Maya). Basically, until the final few missions I had trouble settling on a party, because all the characters had something useful to contribute. Except Terry. Terry is a total cock who makes Shadow the Hedgehog look well-adjusted. Fuck Terry. 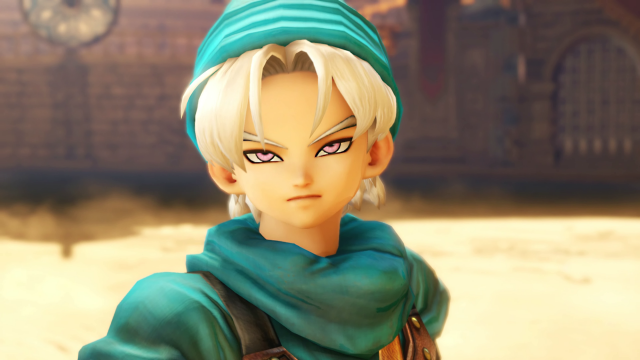 Between each level you get tossed back to a hub area (for the most part a floating fortress called the Stonecloud), where it’s possible to dabble in item alchemy, pick up side-quests, upgrade your basic equipment, and exchange a few words with your companions.

Most of these things happen very, very slowly, thanks to one of the most tedious menu systems I’ve ever seen in my life. If you want to, say, buy a new set of defense orbs for your party, you’ll have to perform four (or more) individual transactions with the sales-lady. Each purchase will send you through the exact same tele-type dialogue, “are you sure yes/no?” menus, and individual equipment screens.

I’m not sure if Koei were going for a charming retro feel with this decision, but it ends up making every single hub action feel about fifteen times as laborious as they should. Once you figure out how to speed through dialogue (down on the d-pad) it becomes only five or six times as laborious, but still. It’s pretty grueling.

Want to turn in a side-quest? You’ll have to sit through a little jingle saying “well done on doing that side-quest” as you turn them in one by tedious one. This is by far the worst thing about a game that, otherwise, is pretty lovely. 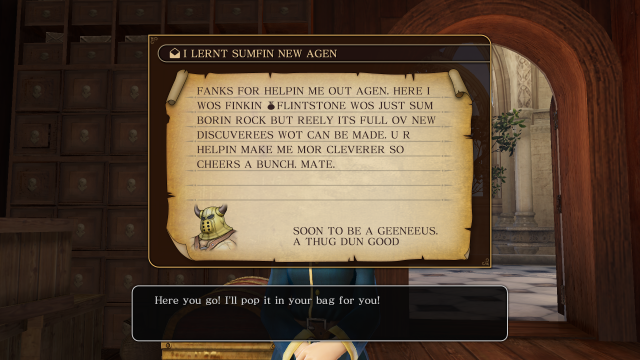 It’s definitely worth reading your mail though, even if it is a bit slow.

Actually, no, the worst thing is still Terry.

It’s also a bit of a shame that this entry has no co-op options (most of the Koei games in this genre do), especially as the multi-character system would really suit a co-operative approach. Apparently this is planned for the sequel.

The other characters, great though they are to use on missions, can get pretty one-note with their personalities. Luceus always wants to monologue a complex strategy, Aurora always wants to cut him off and just get stuck in. Alena wants to punch things, Kiryl wants to stop her and poorly conceal his affection. Maya wants to be rich. Doric wants to be Brian Blessed. It starts off cute and funny, then starts to get old, then … maybe starts to become a little funny again, through sheer, bloody-minded force of repetition (or a slight twist on the expected formula which, after so much previous conditioning, now becomes hilarious). 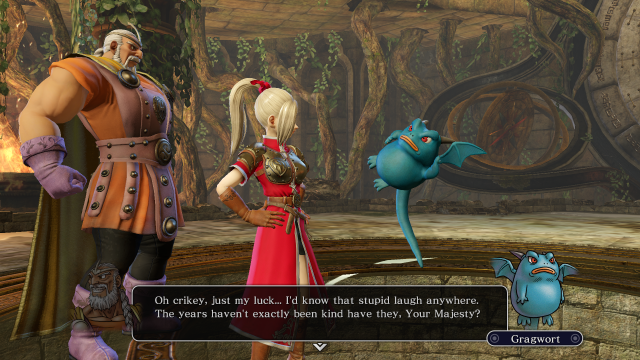 This doesn’t apply to Gragwort, who is hilarious at all times. Perhaps because he sounds exactly like Lily Savage.

That’s actually not a bad parallel for Dragon Quest Heroes itself, really. There are novel additions to the standard Warriors experience (more strategic maps, light tower defense aspects, a few challenging boss fights, the four-character RPG party system), but it is still a Musou game at heart. Large numbers of side activities are there for you to tackle, but the majority pretty much boil down to ‘slash your way through another whole bunch of monsters’ or sometimes ‘re-fight a boss’. Personally, I was happily sustained throughout most of the main campaign’s twenty-odd hours, fatigued a little during one too many false endings, then felt rejuvenated enough to dabble a bit in the post-credits stuff it gives you to do.

Your own interest and tolerance will almost certainly depend on prior Musou familiarity, and how much pure delight you feel at the prospect of a Dragon Quest tie-in stuffed full of familiar characters, creatures and musical jingles. The latter aspect certainly makes this one of the more interesting, and effortlessly charming, Musou-like titles out there; just don’t expect the departures from the formula to be too radical.