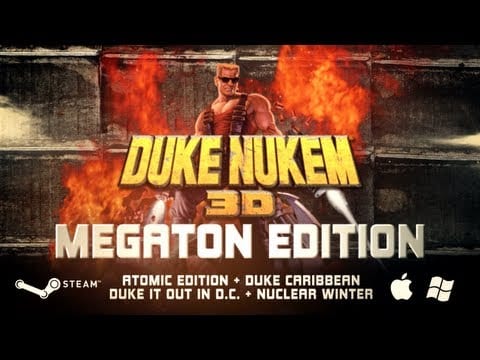 If, for some reason, the Duke Nukem 3D: Atomic Edition at GoG.com wasn’t good enough for you, perhaps the Megaton Edition that’s now on Steam will be more to your liking. Don’t worry, this is the original Duke Nukem, back when he was proper satire and not a terrible version of the things he used to be mocking.

The Megaton Edition has been developed in conjunction with Singapore-based General Arcade, and comes with three thematic expansions (Duke Caribbean: Life’s a Beach, Duke: Nuclear Winter and Duke It Out in D.C.,) along with ‘polished’ OpenGL visuals (whatever that turns out to mean.)

It also has Steam achievements, cloud support and online multiplayer.

“There is a whole generation of fans that may have heard of Duke Nukem 3D but never actually played it so it’s exciting to add a bit of polish to the game and the expansions for the first release on Steam,” says Scott Miller of 3D Realms as he shoots an anthropomorphic pig-cop in the face.

This version of the game is priced at $10.00 USD. It should be available on the Steam store right now, but at the time of writing it is not. No doubt it will pop up soon.