The Dungeon of Naheulbeuk: The Amulet of Chaos has several puzzles for you to solve and even a few secrets to discover. One of those happens to be Golbargh’s demon statues and completing this puzzle lets you battle the secret boss. Here’s our guide to help you out.

Note: For more information, check out our guides and features hub for The Dungeon of Naheulbeuk: The Amulet of Chaos. Be forewarned that this guide contains spoilers. 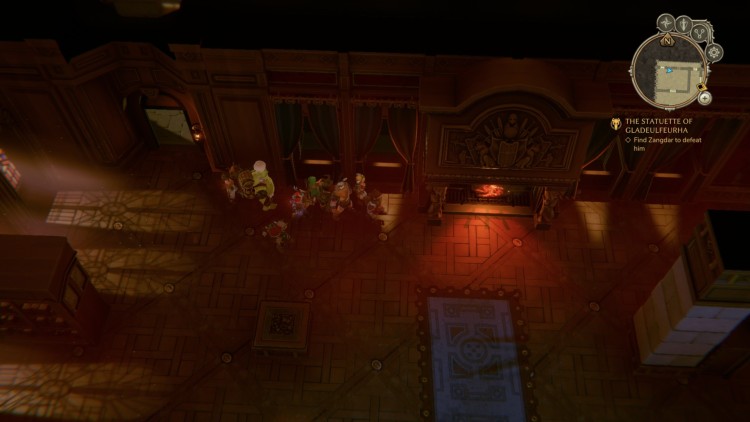 Golbargh is one of the characters you’ll meet in The Dungeon of Naheulbeuk: The Amulet of Chaos. Still, you’ve probably noticed a few demon statues that bear an uncanny resemblance to him. These statues are found on various floors and turning them around doesn’t seem to do anything… until you discover the Demonomicon.

The Demonomicon is found on the third floor before you battle Zangdar. Check out Zangdar’s bedroom (seen above). The passage will lead you to a smaller room with a riddle — the answer is “the air.” Once you’ve opened the room, you’ll see a demon statue and a lootable object which contains the Demonomicon. Go ahead and read it. 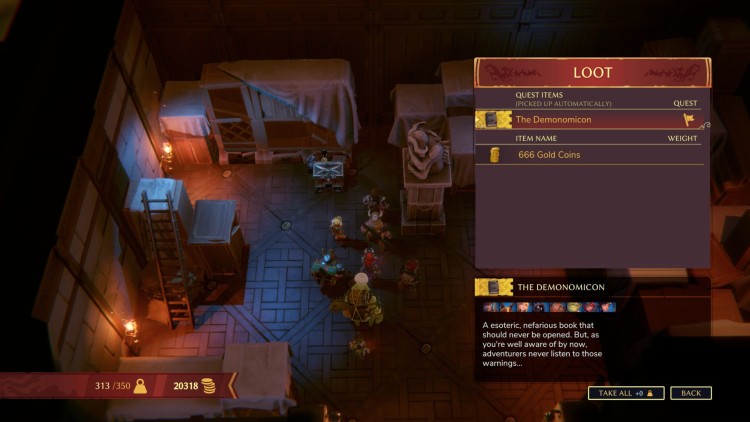 As you can see, the Demonomicon offers a few cryptic clues about the demon statues. There are nine of these in total, and you’ll spot them on every floor except for the zones you can’t revisit. Later in the guide, I’ll offer a summary of the solutions. For now, I’ll explain each passage and how I was able to solve this puzzle. Just remember that you can interact with these statues in any order you want. Passage 1: “Those which will never see the light of day face the rising sun.”

Passage 2: “The highest of them all watches the southern skies.”

Passage 3: “Her earthbound sister watches the arrival of the unknowing.”

Passage 4: “The one nearest to him curses at deafening rituals.”

Passage 5: “Another shuns mortals who burn their gold away.”

Passage 6: “The antepenultimate stares at the eastern wastes of ice.”

Passage 7: “The next one favors the setting sun.”

Passage 8: “The last one troubles the slumber of the Dungeon Master, cursing him for eternity.”

Once you’ve gotten all the demon statues to face in the right directions, you’ll receive the Demon Orb. Go to Golbargh’s Lair on the fifth floor and prepare to fight The Dungeon of Naheulbeuk‘s secret boss. Of course, the secret boss is none other than the demon himself, Golbargh. Truth be told, I wasn’t really able to see his full capabilities. By the time I fought him, all my characters were already level 10, so he’s quite a pushover. I do know that he’s got a massive AoE attack that he charges up once he takes his first turn.

However, you could interrupt him by using any ability that pushes him away — i.e., the Barbarian’s Rib Crusher, the Dwarf’s Get Tae [email protected]$*, and the Ogre’s Kadoula Opog. During the second round, he’ll summon multiple skeletons to the fight as well, but you’re free to ignore them. Focus your attacks on the Golbargh and he should be down in no time. For your efforts, you’ll obtain several legendary armor pieces for the Barbarian, Ranger, and Thief. This also nets you the “We Come In Peace” achievement.