Earlier today, I had three large, time-consuming things to do, the first of which was to finish off Dust: An Elysian Tail so that I could write this review. The other tasks were still untouched three hours after gaining access to the final area: despite the time pressure, I wanted to hunt for secrets and complete side-quests. (Well, that, and the other tasks were boring. Never underestimate my ability to procrastinate.)

Dust is good. I say this now, rather than stringing it out over the course of the review, because I rather suspect that a fair number of people will look at the screenshots and dismiss it immediately on the basis that its cast is comprised of anthropomorphic animals, and thinking of this as “being for kids” or “being for furries” would be doing a grave disservice to a beautiful, fluid, Metroidvania-esque platformer. Far too many people ignored the wonderfully irreverent Recettear for similar reasons, and I’d rather not see it happen again. 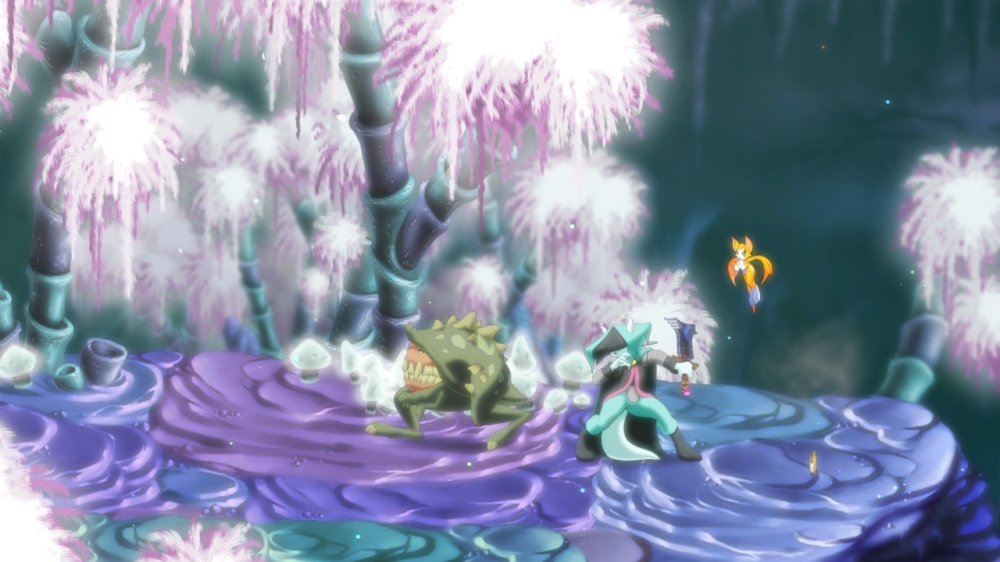 It’s fair to say that Dust conjures up memories of years past, and not just because the silky-smooth hand-drawn animation evokes the glory days of animated movies. Had 2D platformers maintained their stranglehold on the gaming industry then Dust is, I suspect, fairly close to what a major studio might’ve pushed out a few years ago. The animation is as smooth as that of Shiny’s Aladdin, the colours are bright and eye-catching, the mechanics of exploration and gradual power gain are culled from Super Metroid and Castlevania: Symphony of the Night, the level settings (forest zone, ice zone, fire zone, etc.) are pretty much the platforming standard, and naturally, the cast of anthropomorphic animals is highly reminiscent of the heroes of plenty of 90s games. It’s almost a snapshot of gaming as it was 15-20 years ago, given a modern-day lick of paint.

In an equally traditional videogame opening, the titular Dust wakes up in a forest with no memories of who he is or how he got there. Within about six seconds he’s joined by a talking sword and its guardian – a ditzy-but-snarky creature that resembles a miniature flying fox and provides most of the comic relief – who immediately decide to help him figure out who he is and, ooh, save the land from a burgeoning threat.

The dialogue and voice acting are both of the quality you’d expect from a typical Saturday morning cartoon: a little patchy at times, but nonetheless rather charming. They’re also of Saturday morning cartoon style, ping-ponging between stark seriousness and comic humour depending on the situation. Without wishing to give too much away, expect references to Resident Evil 4 and fourth-wall breaking cries of “Mash the buttons!” to be broken up with philosophising on whether who you are now or who you were before is more important. There are no real surprises in terms of story, characters, or plot, and you’re not going to be desperate to find out what happens next, but it works well enough to give you a reason to head through each location. 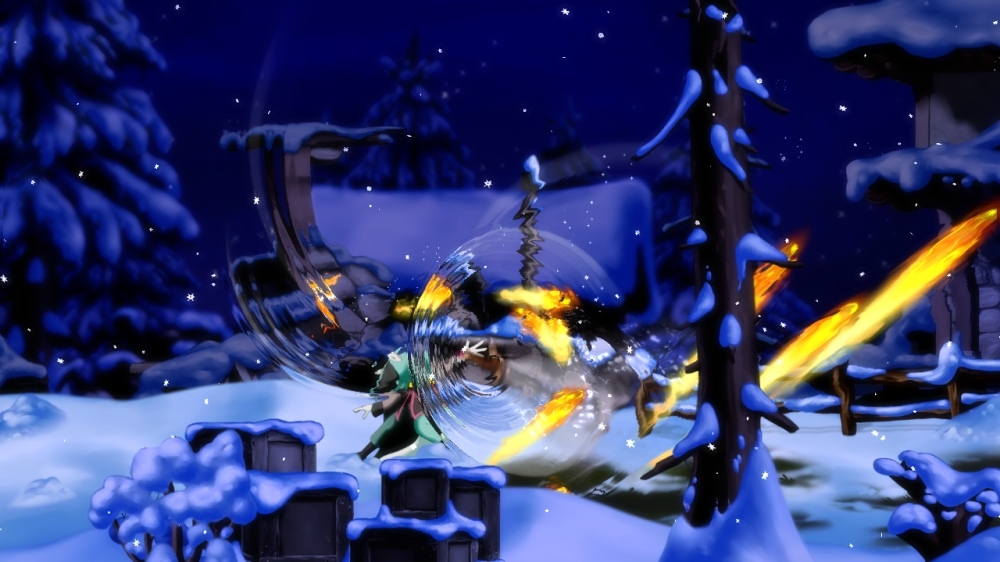 Regardless of whether or not the dialogue clicks with you, it’s rather likely that you’ll enjoy the platforming, the exploration, and the combat itself. Dust is a wonderfully responsive character and, while some later areas require deft manipulation of his movements, there are no irritating pixel-perfect jumps to be found here and you’ll never really have to fight the controls. Each zone on the world map is broken up into discrete screens for you to platform through, plenty of which offer side paths to investigate and many of which hold secrets in the form of item-spewing treasure chests.

Dust has a bit of a light RPG feel to go along with everything else, y’see. Putting aside the new abilities you’ll get as you proceed along the game’s critical path, which tend to just let you access new areas, Dust levels up and gets new equipment from finding secrets and bashing enemies. Before you get too excited, the equipment purely affects stats and most are just direct upgrades; one ring might offer +20 Attack and +20 Defence, while another might be +30 Attack and +25 Defence. Don’t expect masses of swappable weapons, new effects, tough decisions, or even any visual changes. It’s a bit disappointing, in truth, particularly as few of the actual new abilities you get really influence the way you fight.

Still, the combat itself is enjoyable enough for the game’s 10-15 hour duration. It works as a simple three-button system, and tapping those buttons in different orders results in different attacks. Hitting the light attack twice and then the heavy attack once, for instance, results in two fast sword swings and then two heavier slashes as Dust charges forward. Light once and heavy once knocks an unfortunate enemy into the air, where Dust can then mix things up with an aerial combo or slam him back down into the ground. Parries even work off the same system; if you slash at the exact same time as an enemy, then for a brief moment they’re stunned and will take extra damage. 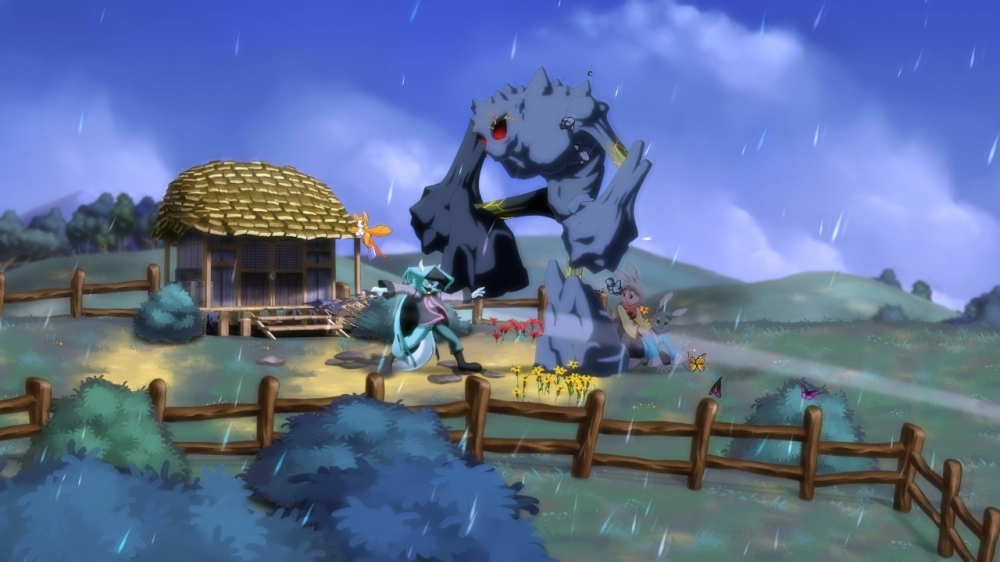 It’s easy to learn and you’ve got ample opportunity to do so in the first few areas (which you can pretty much button-mash through) but the combat becomes more involved once the difficulty picks up and you need to start planning which enemies to hit, when, and with which attack. Choose poorly and you’ll find likely find yourself being hammered from behind or counter-attacked when your chosen target darts out of the way. That said, Dust doesn’t have anywhere near the difficulty of, say, Fortune Summoners, and if you do find yourself having trouble with an encounter then the plethora of health-restoring items and save points ensures that you’ll be able to brute force your way through before long.

If anything, in fact, it’s perhaps a little too easy for the most part. Remember those moments in the Castlevania games where you’d reach a boss, get stomped on within seconds, and end up either trying out new weapons and skills to work out a strategy or just grinding for levels and equipment? There’s none of that here. The bosses rank among the easiest enemies in the game and, for better or worse, you’re unlikely to hit any real roadblocks even if you completely ignore all exploration and side-quests until the end of the game – which would be a shame, as burning through areas without bothering to explore is a good way to miss out on the more devious screen layouts and a number of secrets that require cunning uses of the game’s mechanics. 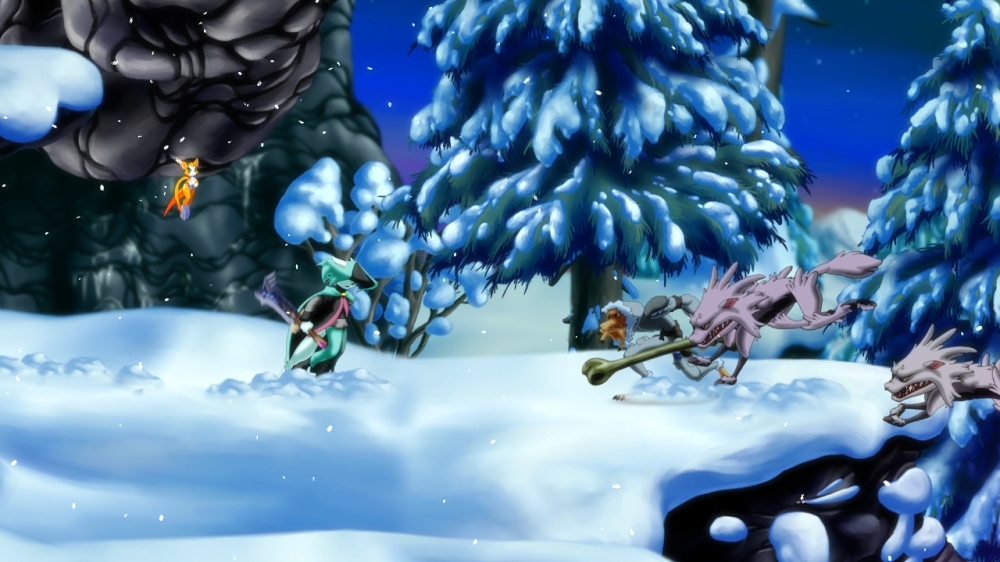 But Dust‘s biggest issue is really one of what it doesn’t do, and that’s “go quite far enough.” Generally speaking, it succeeds at what it does with aplomb and looks utterly stunning while doing it; I’m not going to lie and claim that the gorgeous, hand-animated characters and the lush, hand-painted scenery don’t help bring the game to life. They do, and frankly, seeing it moving on a big TV is almost worth the price of admission by itself.

The problem is that after a bunch of Metroidvania games that offer a variety of weapons and abilities, with unique enemies and clever bosses – the DS Castlevania games, for instance, or Outland and Shadow Complex on XBLA itself – Dust falls a little flat on variety.

On the other hand, it’s strikingly beautiful, fun to play, extraordinarily well made, and – as the opening paragraph implied – very, very difficult to put down, so don’t let a few little niggles put you off. Dust: An Elysian Tail is a wonderful little game, and its numerous charms and decent length easily make it worth a tenner of anyone’s money.

The dangers of cabins, exposed by Resident Evil 6 [Video]

Valve is making an eSports documentary about Dota 2