If you’ve already scrolled down this article and looked at the images… I know what you’re thinking, Dyad is a Rez clone and how dare someone be so brash as to so blatantly copy a Dreamcast classic. However, you’d be wrong to think that. Dyad is something different, it’s something unique and something special. It’s worth your attention. You’ve never played anything like it.

Judging the book by its cover is the worst thing you can do in this situation. At face value Dyad comes off as another rhythm game trying its best to set itself apart with neon-clad visuals, a seemingly random set of geometric shapes and an abstract avatar moving along a pre-defined route – in this case an encompassing tube. 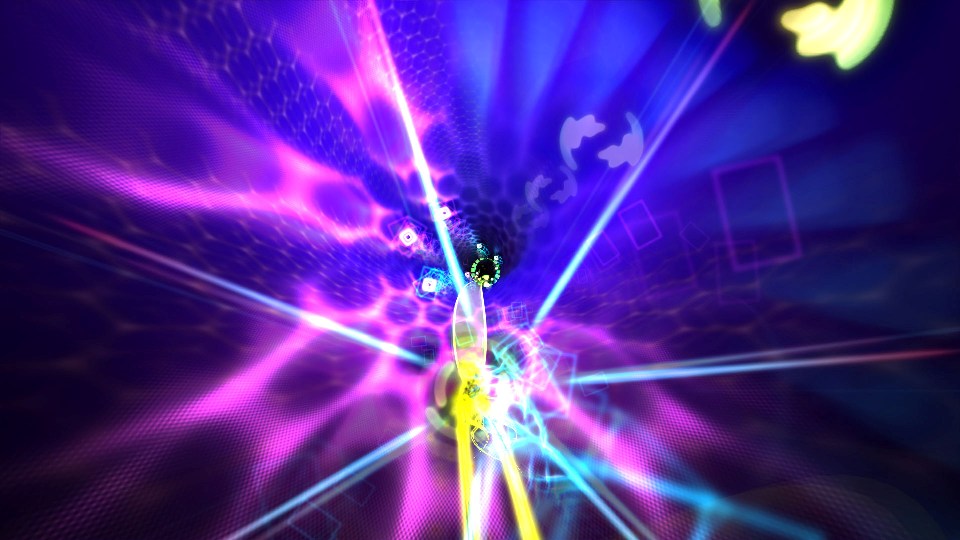 Sure, Dyad has those elements but the way it combines and presents them sets it apart from anything else in the genre. Hypnotic is a word commonly applied to these sorts of games, but this is the first examplefor which the comparison actually rings true and makes sense. Once you’ve gotten to grips with the basics the elements flow into a brilliantly cohesive whole, sending you to a place that challenges the notion that mind and body are two separate entities.

Whatever the case, at the peak of its grip Dyad forces mind and body to act as a perfectly uniformed whole.

The basic premise is that you play as a bundle of energy zipping through a funnel littered with various types of orbs. Each stage has a different objective and forces you to employ different tactics, but the fundamental rules remain static throughout the game. You speed up by hooking and pulling yourself towards orbs, collide with an orb and you’ll be penalised and hooking orbs in a specific order can lead to – for lack of a better phrase – a power-up.

And that really is the basics, each level really does force something new upon you and there’s no way I’m going to list everything here. Before long you’re forced to employ five or more of these rules into a single level and that’s when things seem to go from the conscious to the subconscious. Like the best sportsmen, it’s those that can master the actions to the point that they become second nature that will climb to the top of the online leaderboards. Your conscious mind should only be thinking about what’s coming up, your inputs and your route should be second nature.

It all sounds very airy-fairy, but give it a go for yourself. You’ll soon see what I’m going on about. If you’re worried that Dyad is one of those games that’s all art but no mechanics then you shouldn’t be. Like the very best of games, Dyad does a great job of teaching you the mechanics, giving you the opportunity to master them and then rewarding you for doing so. It can be a difficult game, but it’s always a fair one and you never feel as though you’re being cheated. 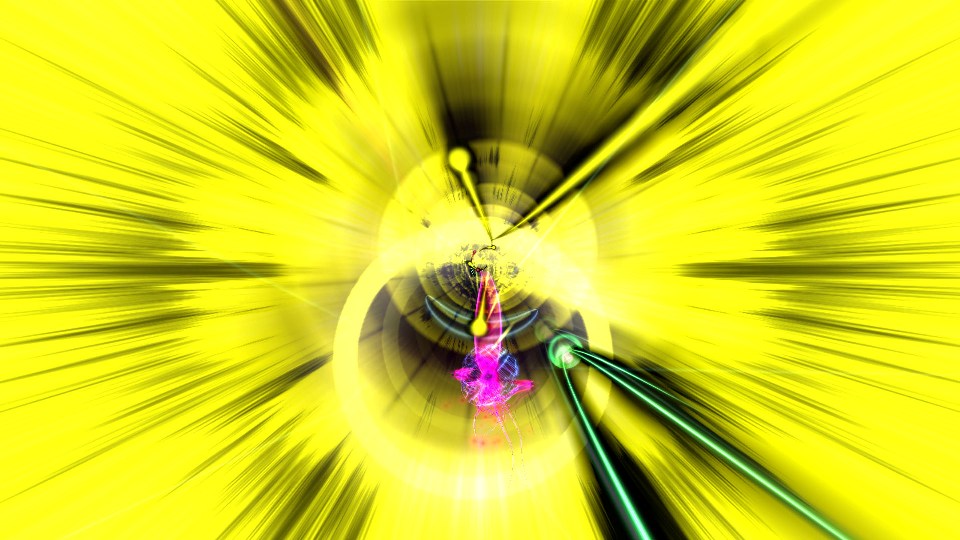 The delivery of the mechanics is just one of many compelling elements; the audio-visual onslaught is nothing to turn your nose up at either. Like the gameplay mechanics, the aesthetics change on a very regular basis which keeps you on your toes and prevents you sinking into a state of tunnel-visioned melancholy.

This is one of those games that looks like a random jumble of speed, light and sound, but to play it makes sense. Mostly. There are times when things can get especially intense and you’re not always sure what you’re actually doing and which orbs you’re hooking on to. It’s then that it’s best to simply let go and allow the what feels like hallucinations to wash over you, with any luck you’ll make it out the other end with something close to a decent score. In fairness, though, those moments are few and far between and when they crop up they’re an experience more exhilarating than annoying.

In all, Dyad is an incredibly diverse experience and one that feels utterly different from what has come become. However, and at the risk of contradicting myself, the gameplay elements are just familiar enough for you to not feel altogether overwhelmed when you first step into its realm.

And that’s the game’s biggest achievement. It manages to take a few familiar elements and morph them into something that is fresh and new, something it is challenging but rewarding. Take the plunge and let it wash over you, you’ll not regret it and the feeling will remain with you long after the glorious final level.

*This review is based on code downloaded from the US PSN store. A release date has yet to be set for the EU edition.

EA Say Dead Space Was Too Scary For Us