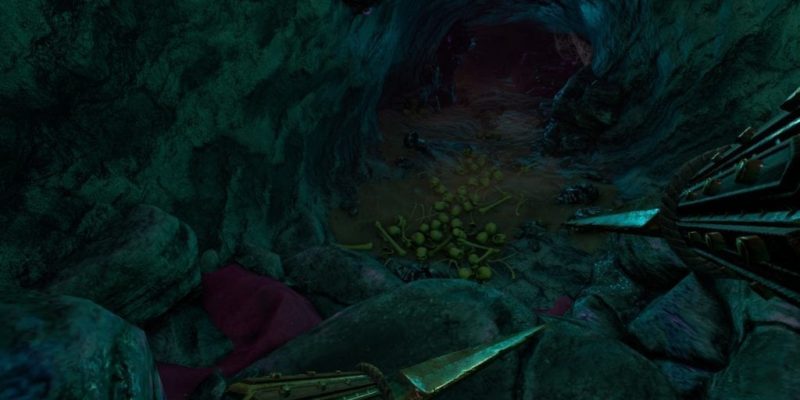 First-person games are clearly not known for their melee combat. Most of the ones that have a lot of it tend to come with third-person cameras, and they rarely feel quite as much like pure action games as they could. I was a bit skeptical of Elderborn at first. So, the question is: did they nail it or is it just pure clunkiness?

I’d like to start off by mentioning that Elderborn is just entering Early Access. As such, it’s nowhere close to finished. What the game appears to be launching with is a 1.5-2 hour teaser for the rest of the game, which is clearly going to be added to as time passes. Just know that, if you purchase this, you’re mostly going to be supporting the devs and not getting anything close to a full-fledged product yet.

That said, Elderborn totally nails movement and combat. The game starts you off in some catacombs with nothing but a sword in your possession. After briefly learning how to use a key to open a door barring your path, some zombies suddenly attack you. It’s up to you to fight your way through the horde of monsters in order to… do a thing. So, yeah, there isn’t a story yet, but that’s okay. 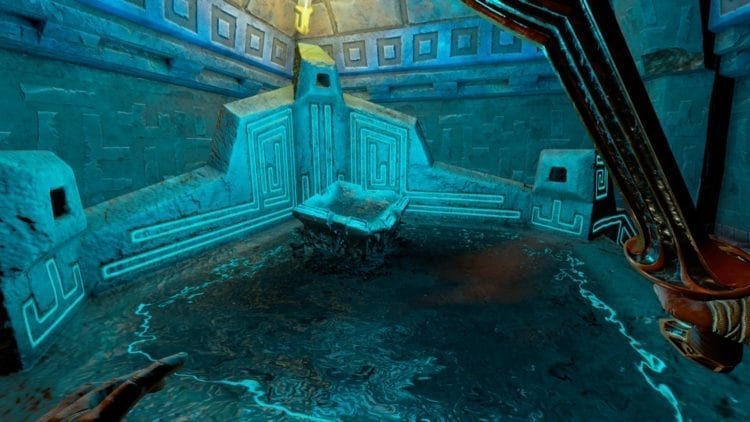 The controls are really good. You have all the basics of movement and combat that are expected: a weapon attack, a block, you can run, you can dash, you can jump, and you can kick. The dashing works in any direction and works very well. It’s great for lunging at an enemy, only to dash back and get out of range. The block also works as a parry. If you successfully parry an enemy’s attack, the world slows to a crawl and gives you a huge advantage. Finally, you can kick enemies, which stuns them or knocks them down, which is extremely useful at many times.

The game’s available content contains three weapons so far. There’s a sword, a heavy axe, and these two weird, little stabbing weapons. They have the differences you’d expect. The sword is of medium speed and has a solid block. The axe is extremely slow, but blocking with it interestingly takes up almost all of your vision. Finally, the stabby-stabs are fast and short-range, perfect for quickly dispatching foes – but can’t block, and can only parry.

I personally didn’t use the axe much. There was really no reason to, as the other two weapons are just much better for fighting. Once I got the hang of parrying, I almost exclusively stuck to the stabbies, as their speed was very helpful and I didn’t need to block much anymore. The axe is also used to break up rubble that blocks your progress. Strangely, you can kick the rubble out of your way while holding the axe; even if you’re not using the weapon at the moment, the game counts it as long as it’s equipped. 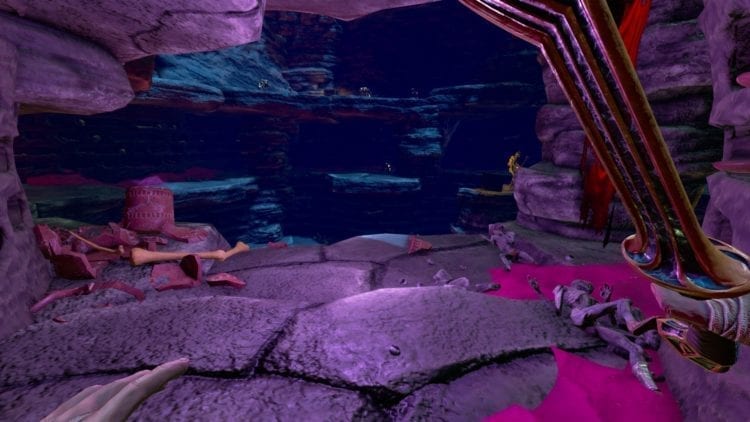 I Hope You Like Dying, Cuz You’re Gonna Do It A Lot

The combat is honestly very fun when you get a feel for it. But you really need that familiarity, because while you’re learning, the game is merciless. Your character can’t take much damage at all. If you get hit three times, that generally means that you’ll have to respawn. Additionally, Elderborn uses the Dark Souls checkpoint method. You have to drink water from these weird fountains in order to make them your respawn point. Naturally, the game doesn’t initially tell you this.

Let there be no mistake about it; this is a “git gud” game. You’ll often find yourself in a room filled with enemies throwing projectiles at you while you try and fight enemies with shields. It can get extremely frustrating without the slowdown mechanic. There was a cave with a bunch of scorpions in it that kill you in two hits, followed by several of a new enemy type that can break your guard. I half-debated giving up during this section. But it forced me to learn and rely on the parry mechanic, which worked out well.

Towards the end of the available content I was running around and stabbing everything like a maniac, and it felt great. It’s really something else to run into a room, parry a spear thrown at you, go into slow-mo and then watch everything around you crumble to the ground as it ends and you’ve stabbed your way through. That said, things can get a bit wonky at times. 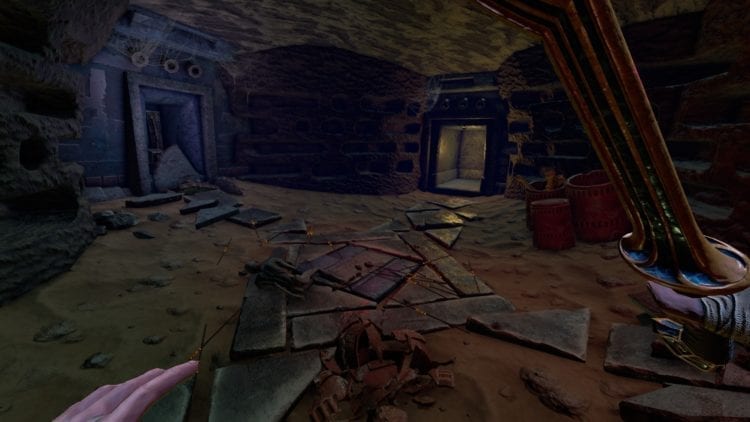 The Enemy AI Is Entertainingly Exploitable

Enemies frequently fall through the ground after you defeat them, and the AI can clash with the level design. I was able to cheese my way through certain sections because the enemies just couldn’t walk to where I was standing. I lured several to the edge of a platform while standing on a bridge and just stabbed them once they got close while I was out of range.

My favorite instance of this is definitely at the end where there’s a currently inaccessible, locked door that you need to do some platforming to reach. There are a ton of enemies on the bridge that chase after you, but if you jump towards the door, they can’t follow, so they just stand on a narrow piece of a platform and wait for you to come back. I did a running jump kick and every enemy fell to their doom. It was immensely satisfying, even if it wasn’t what the devs intended.

Aside from combat, there isn’t a whole lot else on offer. You can collect treasure that’s scattered around, but it didn’t appear to do anything. I’d definitely like to see some powerups in the finished game that increase your life, and perhaps a skill tree that gives you some bonuses. A limited-use projectile could also be fun. 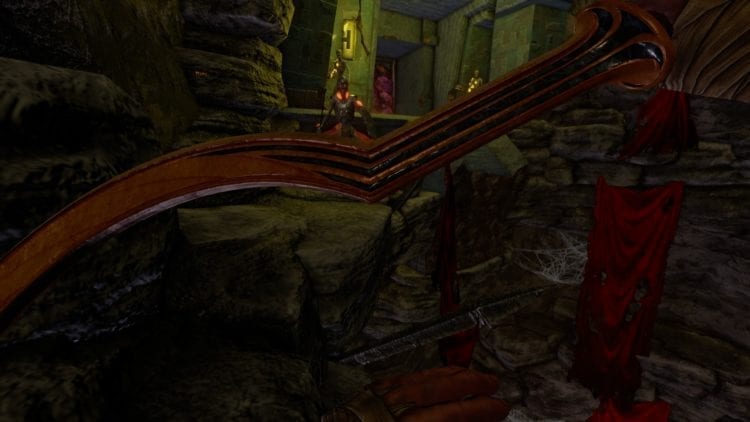 Once I got past the bridge, I made it to the entrance of a large hall with a plaque on the side, thanking me for playing the game. After walking inside I was greeted by the sight of a Dark Souls-esque king waiting on his throne and rising to face me once I got close enough. I was excited to see how Elderborn handled a boss battle. Unfortunately, the game abruptly ended.

Make no mistake, this is a fun game and I really dig the combat and level design. However, it’s really more of a demo at this point. I’m absolutely looking forward to playing the full game once it’s available, but this is really a “support the development of this game” type of early access. If you’re looking for bang for your buck, you’d do best to hold off for a while. But if you want to support a dev making a really promising action game, Elderborn is shaping up to be a damn good time.