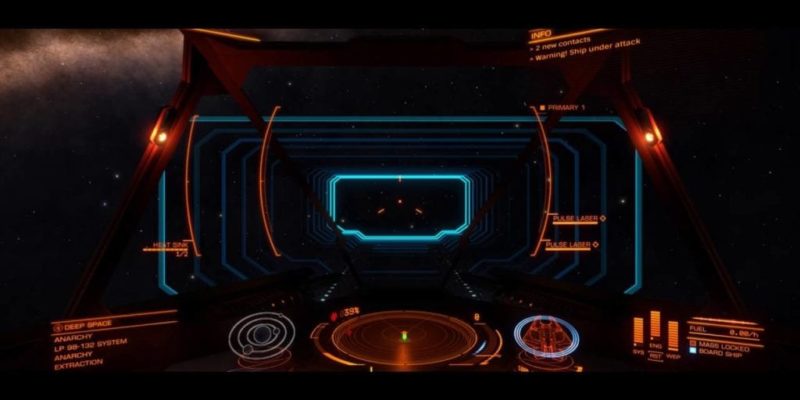 The next major update for Elite Dangerous, the 2.2 release dubbed ‘Guardians’ is scheduled for a mid-October release according to news out of GamesCom. That release window was announced on a live-stream earlier today, along with further details of what to expect in 2.2.

‘Quite a lot’, is the short version. Passengers and passenger transport missions are coming, along with a specialised space-taxi called the Beluga. These jobs could have you ferrying soldiers, refugees, or maybe just tourists around the galaxy. Missions will be time sensitive (people have places to be, after all), and it’s said that passengers can nab your escape pods to leave the ship if they feel like you’re underperforming (or basically holding them hostage).

The aforementioned Beluga will be one of only two ships (along with the Orca) that can have luxury cabins in Elite Dangerous. VIP passengers are likely to demand that you have these.

Fighters launched from ships are also said to be coming in 2.2. A promotional video released yesterday indicates as much, and Frontier have said they’ll be talking more about NPC crew on Friday. There’ll be options for the commander to either remotely fly fighters (while their main ship goes on auto-pilot), or have the AI take care of fighter duties.

In 2.2, there will be a greater variation in the internal visual styles of ports and hangers. Frontier have so far shown off a very industrial looking Refinery port, and an Agricultural one featuring food farms and other greenery. Elite Dangerous will also be adding an improved route-planner in 2.2, which will be able to sort out a multi-stop path according to player-defined filters (see below for videos featuring all of those things).

As well as all that, David Braben has given a video interview in which he expresses his passion for including accurate (or as accurate as possible) science within Elite Dangerous, and how that can guide gameplay. In the course of this interview, he confirms that 2.2 will have improved modelling in star variation, like White Dwarf and Neutron stars. He also talks about improving the modelling of tectonic plates for planets, and the dimming of the galaxy through galactic dust.

In the middle of the interview (below), there is a strange interruption in communications. Frontier has been teasing the arrival of aliens with in-game events and similar enigmatic space-comms, so this adds further weight to the appearance of an alien presence in 2.2.

Here are many, many videos showing some of the things detailed above.