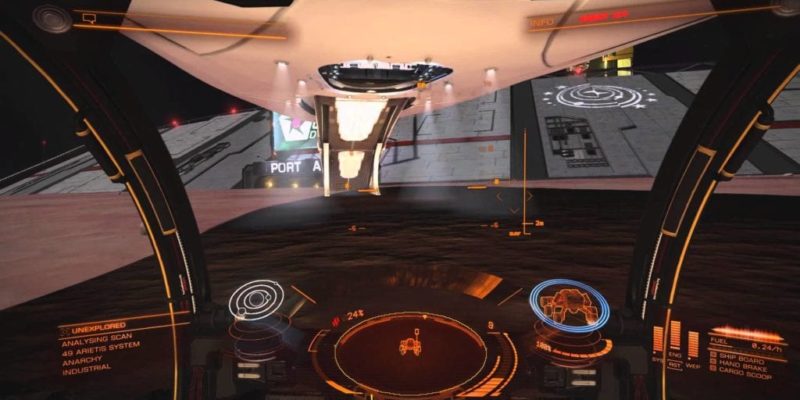 The main event from this week’s Elite: Dangerous newsletter is another ‘sneak peak’ video from David Braben, showing the entrance (and some interior) of a planetary Starport.

It also begins with a short drive-around of the Imperial Cutter, one of the craft due to be added to Elite: Dangerous in the 1.5 update. The beta session for that update (for those who have access) has launched today, with accompanying patch notes. You can see the video, below.

Elsewhere in Newsletter #99, there’s some chat about the new minerals that Commanders will be finding on the surfaces of planets once the Horizons expansion is out. Said materials will differ, depending on the geological world type and where it’s situated in the universe. Both natural formations and crashed meteorites (which will be from off-world, of course) will be fine sources for these new resources.

Initially there will be 25 of these new materials, each of which can be combined in different ways and ‘synthesised’ for “different purposes” relating to a ship or SRV (upgrades, essentially). They won’t take up cargo space, but each Commander will have an allocation of separate space for materials of this type.

According to the newsletter, there will be six different synthesis combos available at first: “Three for the ship including re-supply ammunition, restocking of the AFM and even a temporary increase in jump range for the FSD. For the SRV the benefits include fuel for the SRV, repair and ammunition for the plasma repeaters”. Higher quality materials will convey greater benefits (such as more damaging ammunition).

Minerals in Elite: Dangerous will give off trace signals that can be tracked most effectively by the SRV’s wave scanner.

The ‘Horizons’ beta is scheduled for 24 November.

Sociopathic Football Manager 2016: The Brief Career of Mr A Hole