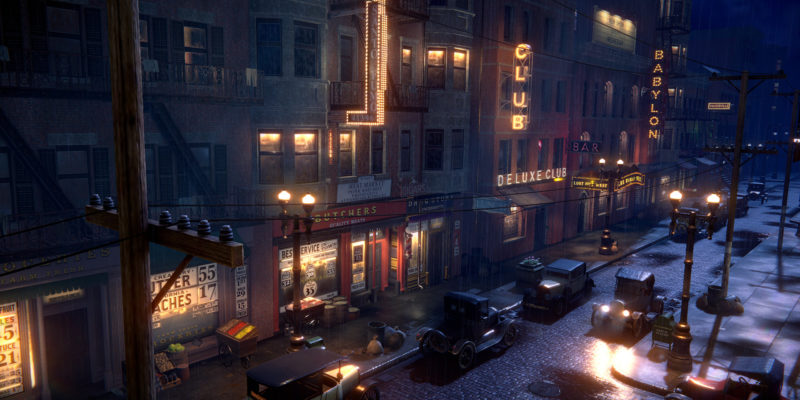 Hollywood has often glorified the criminal underbelly of society. Indeed, many films, TV shows, novels, and games sprang up from creative minds all looking to give people a glimpse at the mafia or various syndicates. Enter Empire of Sin, the newest title from Romero Games (a studio founded by John and Brenda Romero). It’s the most recent in a long line of media depicting the gangster culture of the Prohibition-era United States.

In a way, you can think of Empire of Sin as a modern-day version of Gangsters: Organized Crime or Omerta – City of Gangsters. If you haven’t tried those titles, then think of it as XCOM with a dash of Mafia and Total War, all wrapped up in The Untouchables.

When you start a new campaign in Empire of Sin, you’re presented with 14 choices on which mob boss to pick. Of course, you’ll see the infamous Al Capone and Angelo Genna. There are also some relatively lesser-known figures such as Daniel McKee Jackson, Stephanie St. Clair, and Sai Wing Mock. You’ll even find some unique personages like Elvira Duarte, a character based on John Romero’s own great grandmother.

Each boss has their own unique set of skills that make them a nightmare for their rivals. For instance, Al Capone’s empire bonuses provides upgrades to breweries and brothels at a lower cost. Meanwhile, his diplomatic bonus allows him to increase his faction’s rating passively while in a defensive pact. As for the alluring Goldie Garneau, she earns more from speakeasies (bars) and her casino upgrades are cheaper. Her diplomatic bonus lowers her threat generation to help negate problems with other bosses. 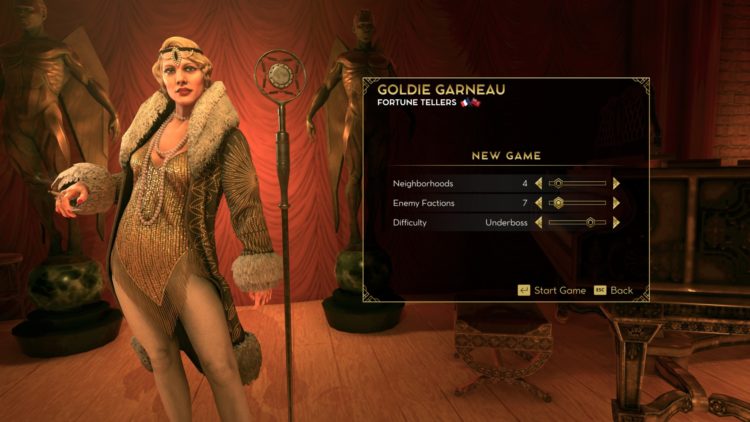 Furthermore, bosses have combat abilities that make them extremely deadly in a fight. Capone’s got his Rain of Fire ability where he pumps enemies full of lead using a Tommy Gun. As for Frankie Donovan, he can use Unleash Fury to beat down foes with melee strikes. Meanwhile, Salazar Reyna has the Santa Muerte where he spins in a circle while shooting his dual-wielded revolvers.

Bosses also have a particular storyline quest that you can complete. These add flavor and fluff to the way you approach the sandbox campaign. 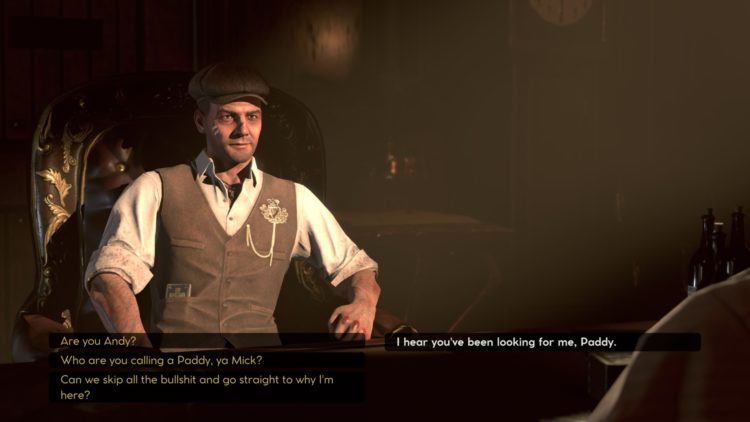 All of the above will have you thinking that Empire of Sin has a ton of replay value. Sadly, it doesn’t. Boss abilities rarely, if ever, make each playthrough unique. For instance, the first campaign I finished was Al Capone’s. In that run, I played fairly aggressively, eliminating the competition with ease. On my second playthrough as Goldie Garneau, I attempted a more peaceful game while looking to ally and befriend various syndicates. Halfway through, I decided to try a third run as Frankie Donovan.

The problem, however, was that Empire of Sin‘s sandbox remained all too similar. You start out in a particular suburb of Chicago and, as you zoom out, you’re shown an expansive map in a pausable, real-time interface. Next, you recruit more gang members, and then you take over various “rackets.” Likewise, you could ransack or raze locations held by random thugs (minor factions), or just buy vacant buildings. From there, you upgraded facets such as ambiance and word of mouth to keep customers coming in, security to have extra guards, and deflection to prevent police raids. 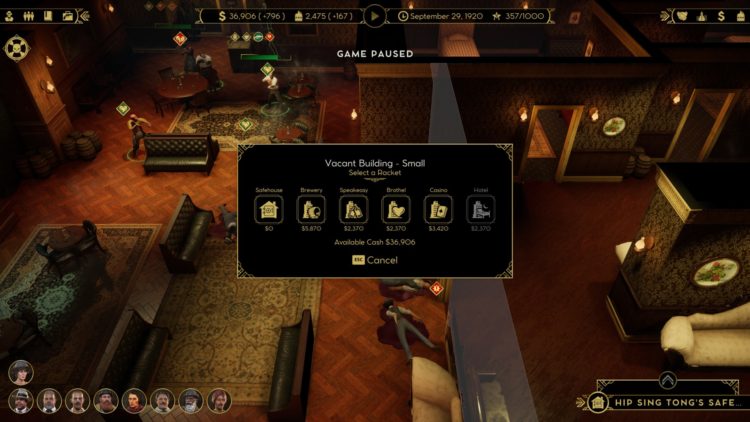 If you’ve got breweries, you can start producing more alcohol. Since this is Prohibition-era Chicago, the more alcohol you’ve got, the bigger the financial boost you’ll gain when it comes to demand. Unfortunately, this concept itself felt too opaque and confusing. There were moments when I’d get notifications that the neighborhood was “bustling” (which meant business was booming). Then, within seconds, I was told that it dropped down to “mediocre” status.

There are also methods to keep the cops off your back such as giving them bribes or asking for protection. You may also engage in diplomatic deals with other syndicates. However, I found that these mechanics felt clunky, too. Even a relatively peaceful game made increasing your rating (so the police can protect you and so bosses could trust you) an uphill climb. Therefore, it was better to just duke it out with the other gang leaders rather than doing sitdown meetings or engaging in diplomacy. Indeed, taking out all the other mob bosses is the only way to actually win the game, making the entire process feel repetitive regardless of your leader. 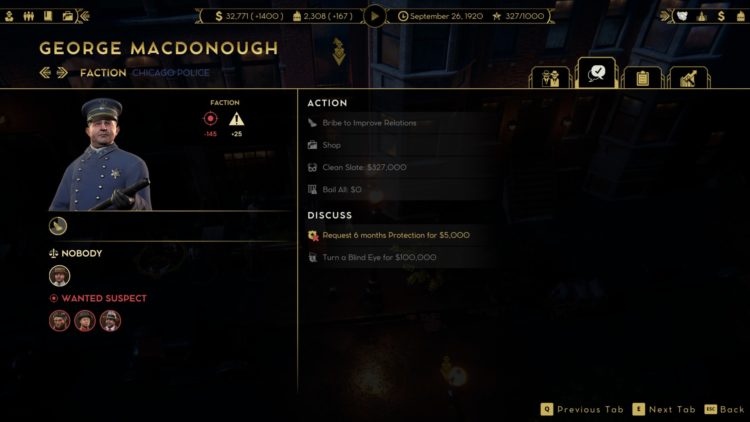 Your Empire of Sin crew

Whether you’re engaged in a firefight against crime lords, thugs, or the local police, your boss needs to have their crews backing them up. Empire of Sin has over 50 unique characters for you to hire, each one belonging to a particular class with their own skills and perks.

I have a few gripes here. The first is that you can only hire new recruits based on notoriety and you’re limited to just 10. Your reputation increases depending on actions such as killing enemies or completely annihilating another faction. This leads to subsequent playthroughs where you always end up with the same characters. Again, this lowers the replay value since you still follow the same progression if you want better soldiers. 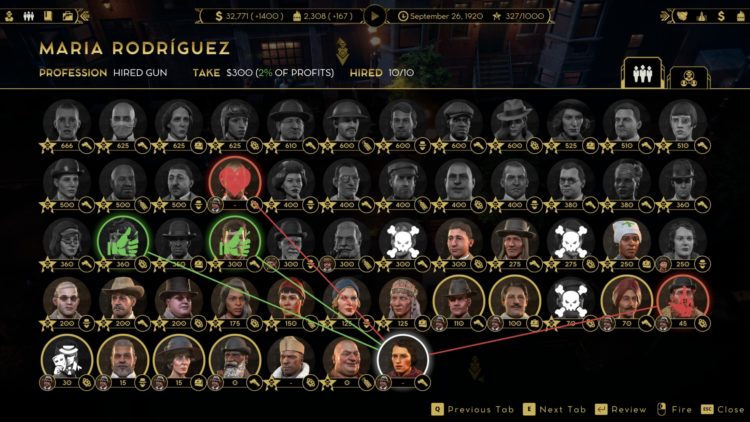 The second is that every gang member has a particular relationship seen in the “Black Book.” If someone hates another character (a big red middle finger symbol), that person won’t join your gang at all unless you fire their enemy. It’s a bit pointless since underlings that have been with you for a long time gain new traits and have increased loyalty.

Now, if they have a lover (a heart symbol) or friend (green thumbs up), this is where Empire of Sin goes from “that’s a neat feature” to “this looks like it wasn’t tested properly.” The issue occurs when a character’s lover or friend has been hired by a rival faction. Your hired gun won’t attack that character. But, if said character is killed, there’s a 50/50 chance that your underlings would leave your crew. As far as I know, there’s no way to “poach” someone off another crime lord. As such, you might need to reload a few saves prior to these battles if you want to have RNG in your favor. 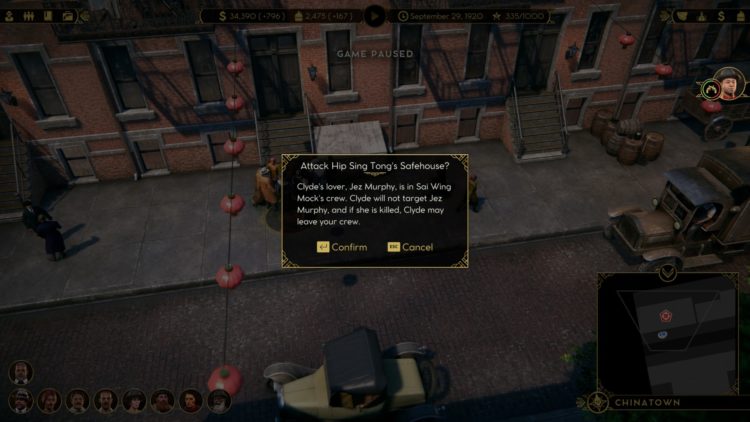 Some of the recent turn-based tactical games I reviewed this year include XCOM: Chimera Squad, Gears Tactics, and Othercide. Mind you, those games had something unique and special that made them stand out. Regrettably, Empire of Sin follows a more rudimentary approach. There’s little that differentiates it from a generic title in the genre. Characters take turns, they’re placed on tiles, they have two action points that can be used to move or attack (although attacking ends their turn), and they can do an overwatch or use cover to mitigate damage.

There are also executions, finishers that units perform when an opponent is bleeding out. These happen to increase notoriety as well. I’ve only seen three types, including the razor slash to the neck which seems to be the most common. 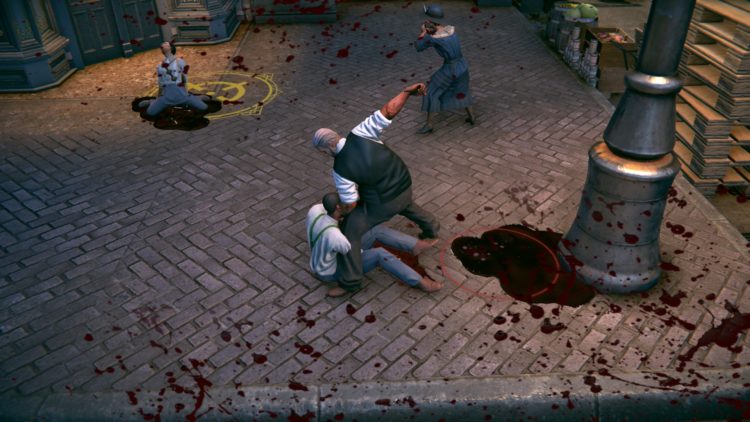 It’s disappointing when you realize that you’re just going through the motions. More often than not, I found myself running in with guns blazing if I’m eliminating thugs. But, if I’m attacking a safehouse or well-defended racket/building, it turns into an “overwatch fest.” That means a bunch of my units are just waiting for the AI to move and get pelted with potshots. Heck, if I’m using Al Capone, I’ll pop his Rain of Fire ability and watch as AI opponents happily wade through his Tommy Gun bullets.

Additionally, Empire of Sin‘s skills and classes do need a rework. Since you’ve got only single-use healing items, Doctor-class healing abilities become invaluable. Character classes that can use rifles and sniper rifles tend to be extremely helpful, too, compared to the rest. If enemy pistols can shoot across the entire room, then short-range shotguns and submachine guns just won’t do the trick. 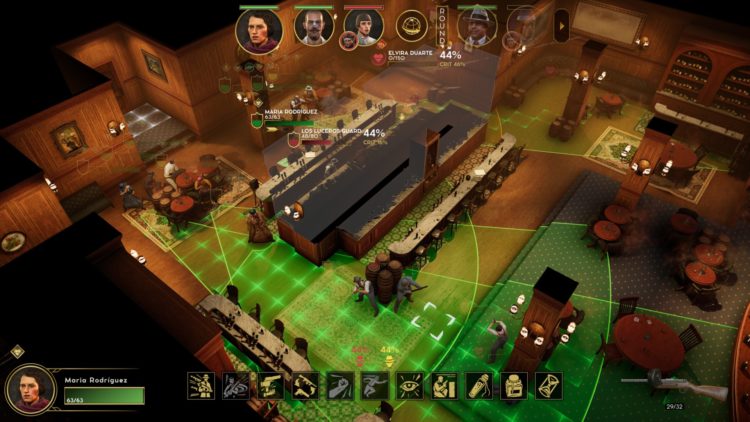 Making you an offer you can refuse

Make no mistake, Empire of Sin is an ambitious title from Romero Games. It’s chock-full of activities, mechanics, and systems that can be overwhelming when you first try them out. In a way, all of these ideas are good, at least on paper. The downside is, once you apply them in a campaign, very few mesh well while others remain problematic.

Worse, you have to consider a number of bugs and gameplay issues such as characters suddenly coming back to life after being downed. Likewise, there were instances when some of my characters couldn’t be used during a battle — I wasn’t given any information or prompt as to why this happened, and my units were just idle in a corner. There’s even an odd occurrence when you promote someone as a mole to infiltrate a rival faction, but the options are severely limited. Oh, and there’s also that weird electric slide movement animation that everyone does. I do believe some of these issues will get fixed in a post-launch patch, so that’s worth the wait. At the very least, I didn’t experience any crashes, slowdowns, or stuttering.

In any case, an Empire of Sin playthrough can be as long or short as you’d want it to be. You can select how many neighborhoods and opposing factions/bosses exist in the game world. Unfortunately, you’ll discover that the end goal (eliminating all factions) and the means of getting there remain the same. Once you’ve experienced everything it has to offer once, you’ll realize that you can refuse the rest. With a few fixes and tweaks, we might see Empire of Sin reach its full potential. As of now, that potential is sleeping with the fishes. 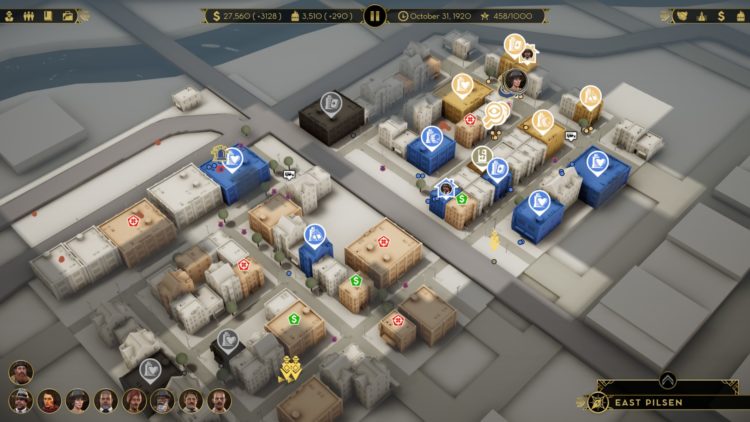 A turn-based tactical game with strategy and management features set in the 1920s in Prohibition-era Chicago.
6

Despite an overwhelming number of strategic options and features, many of Empire of Sin's mechanics just don't mesh well or they can be completely ignored. Playthroughs will feel roughly similar to what you've done previously, and it becomes a repetitive affair and a chore to see what else you could do.