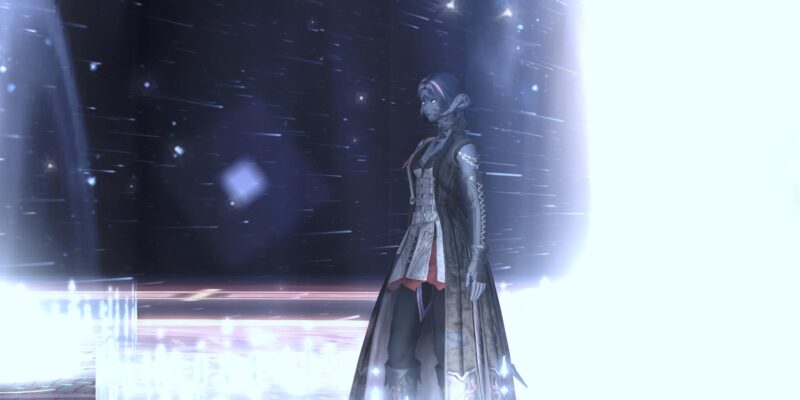 Do I even need to say it? This is the last Trial of Final Fantasy XIV: Endwalker. This is one of the most spoiler-y guides I could possibly write. If you’re not at the point where you’ve unlocked this Trial, you should not be reading this Endwalker — The Final Day guide.

Spoilers within. I’m not going to say it again.

Okay. It’s here. The battle against the Endsinger, where the fate of the universe will be decided. This is the very end of the plot arc that’s been going since Final Fantasy XIV 1.0 launched 11 years ago, and while it’s not the toughest fight, it’s extremely “final boss.” Here’s how to deal with The Final Day.

This is a multi-phase fight, but unless your party panics, the first phase is really the only one to worry about. Phase two is a typical add phase, and phase three is pretty much a heal and DPS check where you only need to worry about the tracking AoEs while burning down the last of the Endsinger’s health.

So, phase one. There are a fair few AoEs that are only telegraphed by cues on the boss or the arena rather than the usual orange lines. If the Endsinger’s eyes are weeping, stay in the middle; if her mouth is glowing, get out of the middle. If planets are whirling around the outside, figure out where they’re going to collide and be on the other side of the arena. And the general rule of thumb, as ever, is “if there is a thing and it’s facing you, it’s probably going to do a line AoE.” This applies to the heads the Endsinger spawns in the arena, and also to the boss herself is she flies off to another side. 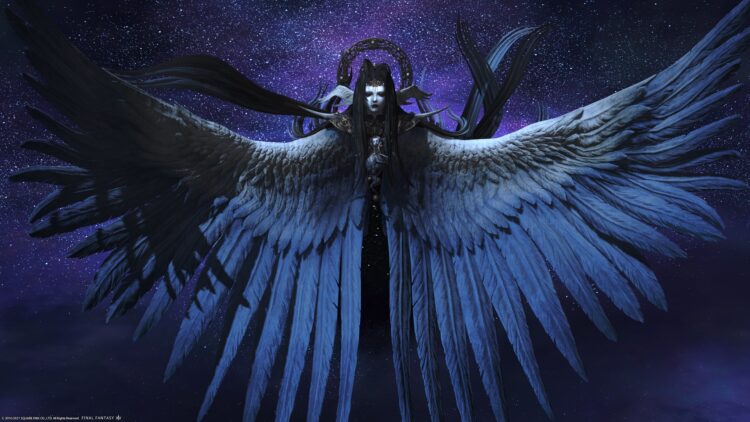 This is a predictably epic fight being that you’re on the back of a dragon at the literal furthest reaches of the universe, fighting the physical embodiment of despair, but for all of that… it’s not actually that hard. Honestly, Zodiark and Hydaelyn are both more difficult fights when going in blind. Then again, dying repeatedly to this would probably shatter the narrative flow, so I suspect that’s intended. Basically, don’t panic too much. Have a glance at the attacks below (or keep them open on a second window) but it’s largely dodging the AoEs. If she’s doing something and it looks like it might be an attack, you should probably try to get out of the way. Remember that and you’ll be fine.

Also, do not use Limit Break before the big countdown, and even then you need to time the tank Limit Break right. 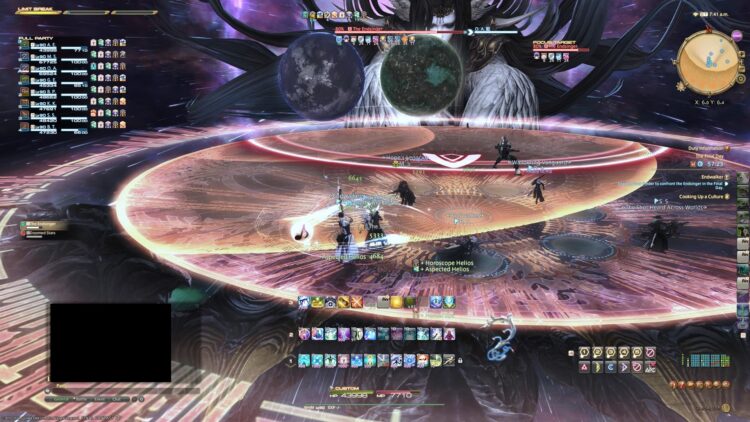 You shouldn’t need me to tell you this, but planets smashing together is a bad thing.

Elegeia — Unavoidable AoE. After that, two planets will appear and orbit around the arena: they will eventually collide, causing a gigantic AoE. Try to predict where they’re going to hit, and move to the opposite side of the arena to avoid.
Galaxias — Unavoidable damage, plus knockback from the center of the arena. This is often paired with Fatalism (below).
Elenchos — One of two AoEs, depending on the visual cue. If the Endsinger’s mouth is open and glowing, it’s a line AoE through the middle of the arena. If her eyes are weeping, then it’s an AoE that hits everywhere but the middle line of the arena.
Death’s Embrace — Everyone is targeted with a line AoE. Spread apart across the arena so you don’t damage each other, but be careful with positioning. It also leaves behind a black feather where each line hit a player: these will explode into a circle AoE. There should be plenty of safe space, regardless.
Aporrhoia — Four Endsinger heads appear on the arena and charge up line AoEs. Stand between them (or behind them) to avoid. 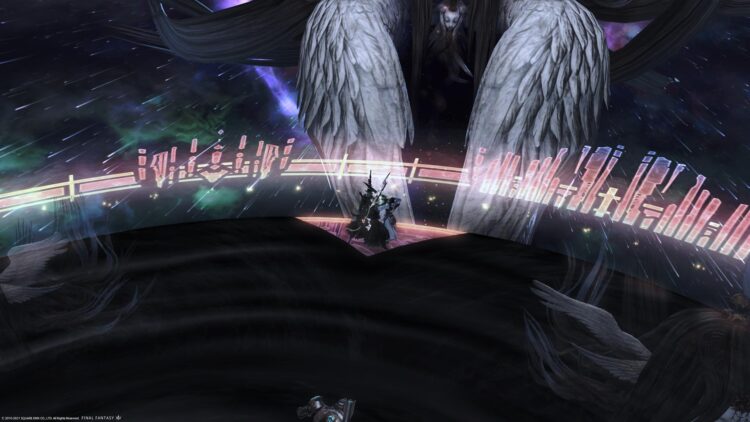 Ekstasis leaves safe areas of this size at the cardinal points of the arena. You don’t have much space.

Hubris — Tankbusters, one on each tank. These may be AoEs; I’m unsure.
Elegeia Unforgotten — The usual Elegeia stuff — unavoidable AoE and a planet crash AoE — but the Endsinger leaves the exploding planet where it is after it blows up.
Fatalism — The exploding planet happens again, exactly where it was before.
Ekstasis — AoEs which explode into the Endsinger’s heads. Those heads then leak out giant inky puddles of doom, leaving only the tiniest sliver of safe spaces at the cardinal directions of the arena.
Interstellar — The Endsinger flies to one side of the arena and charges up a line AoE that covers almost the entire arena, except for small slices on each side. Simultaneously, four party members are targeted with an AoE. Move to the sides. The targeted members should try to be as close together as possible without overlapping so that everyone else has room to hide.
Nemesis — Targeted AoEs on most of the party.
Planetes — Summons Kakodaimon and triggers the start of phase two. 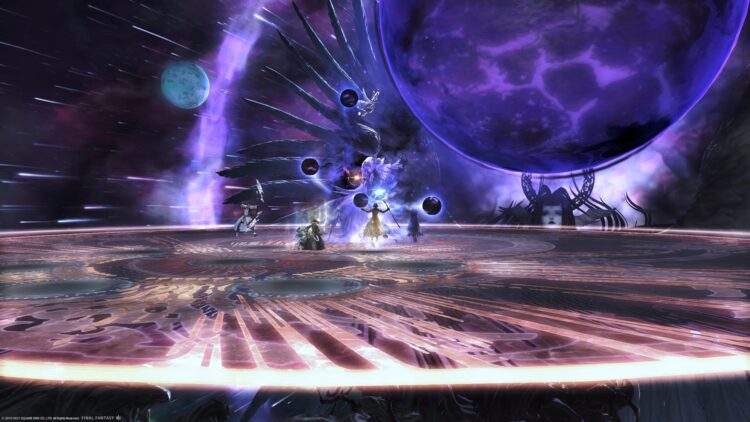 The add phase is pretty simple: kill the thing before the Endsinger gets her cast off.

Meteor Radiant — Planets appear, and rainbow lines indicate where they’re going to hit the arena. These will explode into circle AoEs on those landing points.
Meteor Outburst — Targeted AoEs on the entire party. Spread out.
Katastrophe — Unavoidable AoE.
Ultimate Fate — Massive, unavoidable AoE damage. You must use a tank Limit Break 3 here to survive; even then, it will reduce you to about 1% health. Use it when the game warns you there are about four or five seconds left.
Fatalism — The Endsinger reverts time and casts Ultimate Fate again. No Limit Break survival this time — a cutscene will keep you alive. 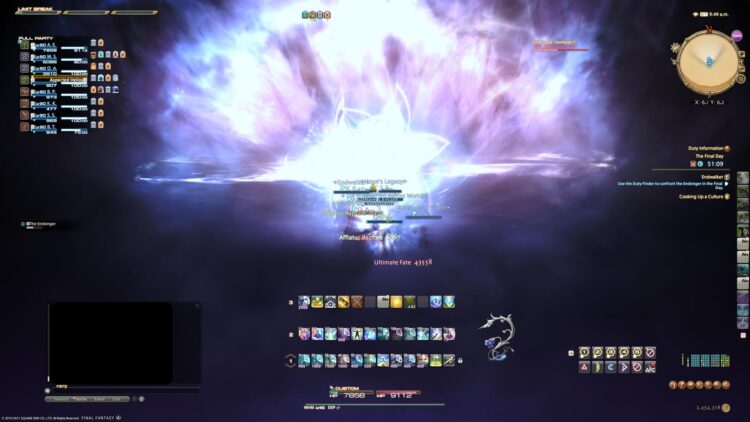 If you don’t have a tank LB3 for this, it will kill you.

Telos — Unavoidable AoE.
Telomania — Repeated unavoidable AoEs as the Endsinger sweeps her wings across the arena, followed by tracking AoEs that follow the party members around.

Do not use Limit Break before it’s needed by the tanks at the end of phase two. Just don’t. If you remember nothing else, remember that.

In the not-very-short “short version” section, I talked about the rule of thumb of “if a thing faces you it’s probably doing a line AoE,” and that’s true. Honestly, that’s true for most things in this fight: if something looks like it’ll cause damage in some way, it probably will and you shouldn’t be near it.

Feathers! Endsinger heads! The Endsinger crying or vomiting black goo! The Endsinger swooping over to another side of the arena! Planets smashing into each other! All of these things aren’t otherwise telegraphed before they go off, but if you’ve made it this far in the game you can probably guess that they’re going to result in pain if you’re near them or if they’re facing you. 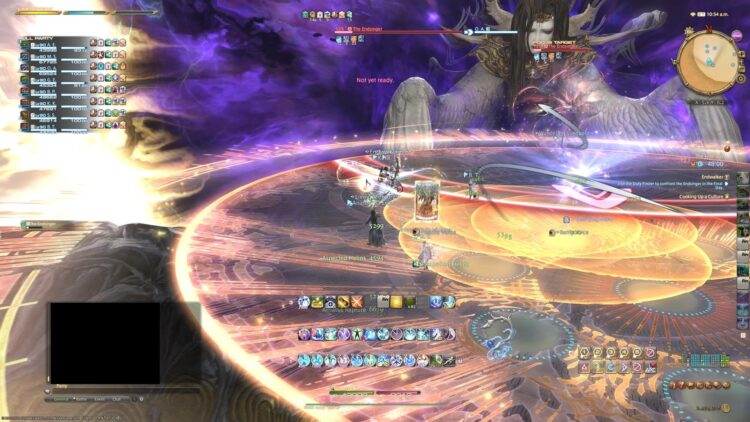 This is pretty much “dodge the few AoEs you can, heal through the rest” while knocking off the last part of the Endsinger’s health.

But I think you’ve got this. As I said, if you’ve made it this far then I don’t think the Endsinger will cause you that much trouble, even if this is the most “end game” fight imaginable. And I’ll be praying for your success anyway. Who knows? Maybe that’ll alter the Dynamis in your favour just a touch.

With the Endsinger down… well, you’re not quite done with Endwalker‘s story, but you’ve effectively beaten the final boss, averted the Final Days, and made it into the ending. There’s a little more to come, but you don’t need my help or a guide for that. Congratulations, Warrior of Light.