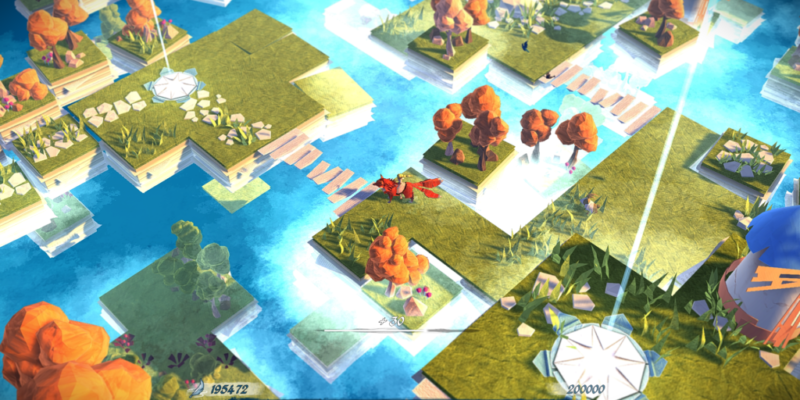 The first word-puzzle-centric game I can remember playing was The Enormous Turnip on the ZX Spectrum. It didn’t focus on pure typing as much as Epistory, but I wanted to mention a kindred spirit that wasn’t The Typing of the Dead or sodding Mavis Beacon (who, despite lofty claims, taught me nothing). I’m pretty sure The Enormous Turnip had woodland creatures in it too, so there’s a further, utterly concrete, link between the two games.

Epistory casts you as a lady riding a multi-tailed fox (more than two tails, SEGA lawyers please note) in a Unity-powered world of unfurling papercraft delights. The static images peppering this review can’t really do justice to the way forests, deserts, and mountain ranges rustle and pop up into creation, but should at least convey their often intricate designs. Tiny paper squirrels hop around inside Epistory’s woodlands, and uneven tiles suggest the rich blues of shifting bodies of water.

It’s a clever and gorgeous fairy-tale landscape, with the attendant tale of your protagonist’s quest to drive corruption from the realm. That’s the surface-layer narrative, at least. Beneath, there are regular hints and indications that more is going on. Fragments of voice-over and collectible images that touch on memory, loss, and the spirit of creativity. 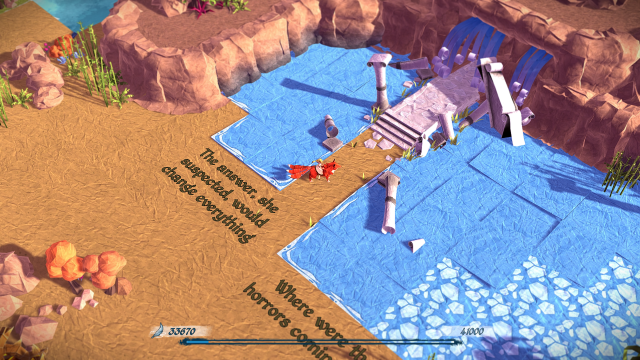 I’m not kidding, that’s some of my favourite water in any game. Simple, but fantastic.

Trotting about on your adorable fox pal, you’ll periodically come across some unpleasant looking insects. Like most light-RPG games, you’ll engage them in battle. Unlike most light-RPG games, you’ll do it by hurling words at them (and not words like “taste the sting of my blade you stupid woodlouse thing”). As mentioned at the start of this piece, Epistory is a type-em-up. Your keyboard is your weapon in an even more literal sense than usual.

At first this is straightforward enough, you hit the space bar to enter typing mode and bring up the insect’s word-weakness and fire out a quick “reach” or “woe” in their general direction. As you move across the surface of the world, barriers like tree trunks (with appropriate removal words like “bark” or “wooden”), or areas that can be restored (using the names of flowers or plants), are also encountered.

But as things progress and you find yourself entering the mines, caverns, and mausoleums beneath the over-world, the typing fights start to demand a certain amount of tactical thought. Before too long, elemental powers like fire and ice are acquired, and enemies that are only vulnerable to a certain type emerge from their nests. 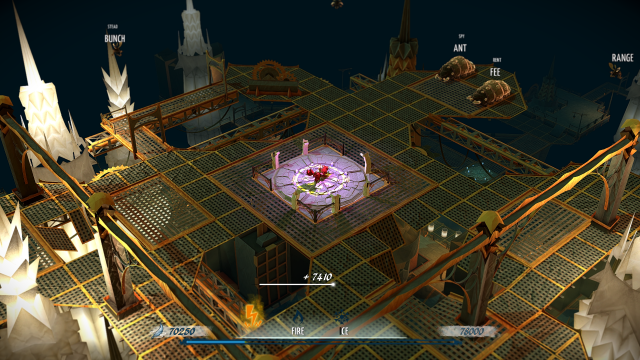 The industrial revolution is no place for giant grubs and slugs.

Though insects are infrequently roaming about the place, most of the dungeon confrontations fix your character in place and assail you with foes for a set period. These segments are where Epistory is at its most demanding, forcing you assess the different speeds of approaching insects, size up their words (many will take multiple terms before they go down), and decide on your best elemental approach. Ice will slow quicker foes, while fire can automatically burn away at a second word without you having to type anything. Later powers, like the electric spark, can jump between attackers.

The typing battles are at their best when they make the player either switch between powers (which has to be done via typing out “ice,” “fire” and so on), or deal with an additional problem; like the darkened mine that has to be regularly re-illuminated by crystal light sources (using words like “reveal”). During these sequences it can be a mental and physical scramble to get the correct pattern of words out in time, and Epistory could do with one or two more challenges of this nature to keep the difficulty curve from sagging.

By the time I’d collected three of the four elemental powers and filled out the game’s basic, power-boosting skill tree, I was more likely to be tripped up by US English spellings than an errant spider. Or by the title’s occasional confusion over whether you’re attempting to switch powers or type out an attack word with similar starting letters. 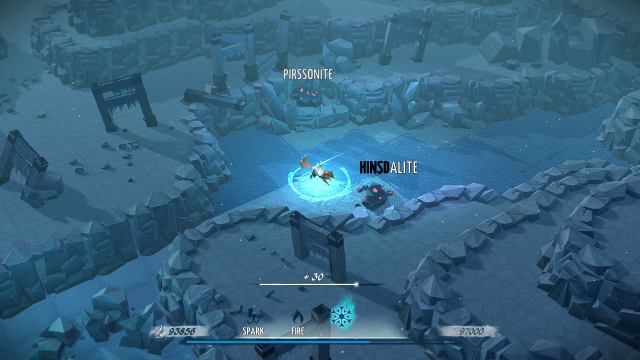 As someone who types most of the day for their job, though, it’s perhaps a bit unfair to criticise the difficulty level too heavily. My five hour play-through was hardly a flawless show of typing virtuosity, and Epistory has a score-based arena mode to prevent people like me getting too smug about their skills. Despite the story-book art design, this isn’t really a typing title for younger players. An ‘adaptive difficulty’ setting doesn’t actually change the word list (which at its hardest includes complex geological terminology and other unusual phrases in its lexicon), just the volume and pace of the insectoid (and arachnid) enemies.

Over-world progression feels somewhat open, at least to the extent that it felt possible to explore and play certain areas out of an intended order. Not quite full sequence breaking, but enough freedom to find and complete portions a little ahead or behind time. As the world figuratively and literally unfolds, it’s possible to purchase a fast travel skill with your levelling up points. Brilliantly, this too requires typing to make it work properly (which stumped me for an embarrassing amount of time).

In an effort to encourage rigorous typing technique, Epistory opens with the suggestion of using EFIJ as movement controls. Fortunately, for those of us who automatically recoil in horror at using anything else, WASD is also an option. Precise movement isn’t a huge portion of the game (in the biggest battles, you’re locked in place), but the fox’s rather rigid, eight-axis control can make some of the dungeon pressure-tile puzzles a little bit more annoying than they should be. 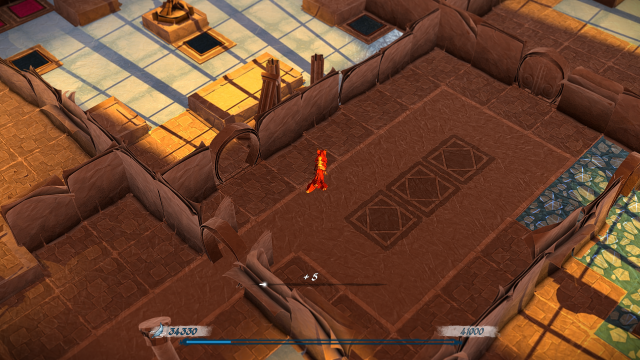 Slippy-slidey ice puzzles. Nice to look at, less fun to do.

Outside of the Typing of the Dead series, it’s not exactly easy for me to recall titles that have tried to mesh typing precision with inventive mechanics. That Epistory has succeeded in structuring a tactical, sometimes tense, battle challenge around the accurate spelling of words is quite an achievement; and the realm of paper-craft and letters is the ideal picture-book binding for this elegant system. The fairy-tale narration can veer towards over-wrought attempts at empowerment, and there are a few lingering issues around control inputs and a faltering difficulty curve, but Epistory comfortably establishes itself as a pretty magical way to give your typing fingers an adventurous workout.