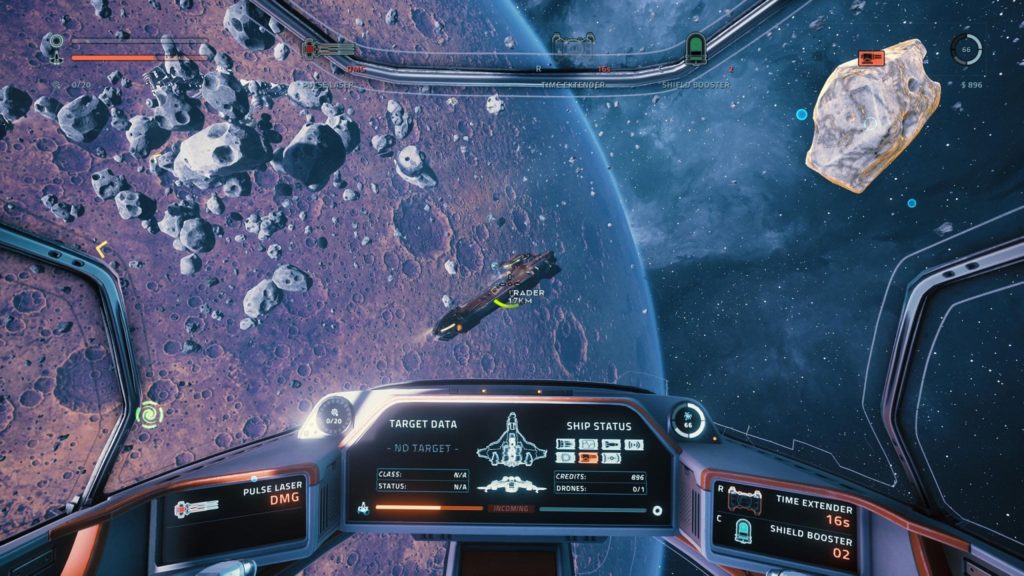 When I sat down with Rockfish a couple of years ago to take a look at Everspace it was still very early in development and it was hard to tell how it would pan out. As it entered early access it slowly but surely became more polished, but, even up until a few weeks ago, there were still features to be added. But after playing the game on and off for the past year a full release build is finally here.

Everspace is not your typical space game. It’s a rogue-like experience where death is expected. In fact, you need to die just to find out what the hell is going on. In Everspace you have no idea why you are stranded in space, what’s going on around you, or how everything works. The player has to uncover a mystery and that can only be done by traveling through space sectors looting and upgrading as you go.

Rockfish has made death an integral part of the story, but fear not, because when you die you don’t lose everything. Sure, you lose your progress, but you don’t lose the essential items and equipment that will make each successive run easier.

Collecting loot and upgrading ships is an essential part of the journey. Starting with a very basic ship you enter the first Sector of space. Sectors are mapped out areas of space with key jump points. The general idea is to get to the other side of the Sector and move onto the next. As you travel through each Sector, more information about the world you are traveling in is slowly revealed through dialogue with the ship’s AI, and at key points via flashback cutscenes.

Making a jump to a new Sector.

Each Sector of space is also procedurally generated, so even if you fail to make it to the other side then the next run is not going to be the same. There will be similar mission goals but they are not going to look or play out the same way. The enemies and allies you encounter are also different, making each run feel like a fresh start.  This is where Everspace shines; the feeling of trying to get to the unknown without direct repetition making that journey monotonous.

Making a run for it

Looting in each Sector is vital to progression. New ship parts, resources, weapons, fuel, and credits need to be collected as you go. These are obtained through combat, picked up in space as they float around, or mined (which, in the traditional videogame manner, involves shooting at resources usually stuck the side of an asteroid). The fact that so many elements are important to survival and progression means you have to make tough decisions. During any encounter you are usually outnumbered, so making the right choices is vital to survival. You will die though; and that’s a good thing.

When a player dies they have to restart the run from Sector 1 again and there’s the option to change the difficulty. Easy, where you gain fewer credits, Normal, or Hard (which grants more credits). Prior to launching back into space, there’s also a Perks tree to help improve your chance of survival. A key Perk is Energy, which is drained by using your basic weapon or using the ship’s boost function. If Energy is low you can’t escape an attack easily and your weapons are practically useless. Another key Perk is a boost to how many credits you pick up. With credits, you can buy better stuff and improve the ship for the next run. The more credits you can accrue before the death the better. Get enough of these and you can even buy a new ship.

Fuel is also key. Without fuel you’re unable to hyperspace jump to the next waypoint in a Sector. Well, you can try to jump with low fuel but there’s a high chance you’ll just explode during the jump and that’s very, very, annoying.

At one point I had reached the end of the Sector but fuel was low. I saw a neutral fuel freighter by the jump gate. I had to decide whether to attack the freighter and its escort to get lots of lovely fuel loot, or just plough on with low fuel. In the end, I decided to attack. I managed to take out the escort fighters and destroy the freighter’s fuel pod to collect a stack of fuel. However, the ship was a mess, and systems were malfunctioning. I had no Nanobots to repair the ship, so when I reached the next Sector I was practically dead on arrival. I had just pushed things too far and that’s what Everspace makes you do. The game urges you to keep pushing on to find out more about the story, but push too hard and it can all go south rather quickly.

This is not going well.

Rockfish will also tease you by placing loot on neutral ships. As soon as you hit the loot crate, that ship will become hostile. Make enough enemies and they will remember your hostility in the next zone. It’s small things like this that make you weigh up the pros and cons of your actions.

Despite many, many deaths, I wasn’t bothered. I had got pretty far after that fuel shortage escapade. I now knew more about why I was there and I had experienced more of the stunning galactic atmosphere. Playing Everspace is almost relaxing because it has some of the best-looking space I have seen in a game for a while. It’s colourful, and there are all kinds of space disturbances such as lightning storms plasma fields, ice, and solar flares. It’s a joy to float around in until an enemy ship turns up to ruin the tranquillity.

Everspace differs from other space sims in another way, the controls. This is a joypad or keyboard/mouse affair. There’s no flight stick/HOTAS support, and that’s because targeting is all controlled with the mouse (WASD controls the ship’s movement and direction).  Not having a flight stick option and not being able to fix the targeting crosshair may be one of the few gripes I have with the game. I would have loved to have tried this with a flight stick, I think it could be cracking and a worthy addition.

I’ve playing the game completely from the cockpit view, but there is also a third-person view mode. This feels less immersive but is probably quite useful if you have opted for using a joypad. The game also comes with VR support which unfortunately we couldn’t test in this build. Rockfish has told us just prior to posting this review that the release version will have the VR support working in the public launch version.

The way in which Everspace’s story unfolds as you make each new run attempt is clever, and succeeds in its supporting role to encourage repeated journeys. The fact that you’re starting back at Sector 1 could easily have been disheartening, but instead it’s challenging. When you jump into new areas of space it’s a jump into the unknown, and you’re never quite sure what’s waiting for you on the other side. It could be something completely new to help you on your mission or a hostile force.

Rockfish’s take on the space shooter is certainly different, and it’s a refreshing change for the genre. It’s not about exploring the vastness of space in an open world (though jumping into the unknown is certainly still a factor), it’s quite simply an arcade shooter. It’s also a great looking game with an easy to grasp flight model and a mystery waiting to be uncovered. If you enjoy action space sims or rogue-like games such as FTL then you’ll enjoy this. Even if you don’t, there’s a high chance you’ll still enjoy this.  Everspace is a cracking game.

For more on Everspace, check our hints and tips guide.

A great space shooter that stands out thanks to the rogue-like gameplay, fantastic atmosphere, and arcade-style combat.