I love Westerns and vampire stories; combine the two and you’ve got my attention. Evil West hit a bit harder than I was expecting, as I honestly enjoyed the story as much as I appreciated the setting. Unlike developer Flying Wild Hog’s other two games this year, this one’s campaign is of above average length. The game is also more than happy to kick you up and down the block a little, as some of the combat encounters can push you to the absolute brink. But it is a highly linear experience that doesn’t have much going on after you complete it, missing a couple of easy opportunities along the way.

Evil West focuses on a group known as the Rentier Institute, headed up by a man named William Rentier. You play as his son Jesse, who ends up taking the head of a famous vampire named D’abano at the start of the game. D’abano is trying to push the vampires into declaring full-on war on humanity. But when D’abano’s adopted daughter Felicity launches a strike on the Rentier Institute and aims to take the world by storm, Jesse and his associates are all that stand in her way from changing the trajectory of the nation as we know it.

Cutscenes are frequent and make for an enjoyable viewing experience. The cast of characters is likable, the dialogue is punchy, and the pacing keeps things moving and consistent. I would very much like to see a sequel to Evil West, as I think the world and characters would make for a fun franchise. Facial animations during cutscenes can be weak, but the production values on display are impressive. The game mostly looks fantastic, with distinctive, well-realized environments, and a memorable bestiary filled with twisted monstrosities that are satisfying to tear asunder. Evil West is broken into 16 levels bookended by cutscenes. Level design here is highly linear, although there’s room for exploration. For the most part, you’ll briefly navigate through the game’s areas before getting funneled into a combat arena. It flows much like Shadow Warrior 3. You’ll find cash and upgrades squirreled away in chests and, despite the linearity of the levels, these can actually be easy to miss as many of them are kind of hidden. Navigation is tightly corralled by glowing chains that show the way forward. It’s quite difficult to get stuck. If you do, you usually just need to look up and find a chain to shoot or something along those lines.

There are a couple of levels later in the game that are more open and allow you to tackle objectives in whatever order you wish, which is a nice change of pace. But these are exceptions, as you’ll be boxed in by invisible walls for most of the experience. You’ll activate switches, power machinery, and create the occasional zipline, but you’ll mostly be running towards the glowing chains to climb something or squeezing through cracks to progress. There’s no platforming or anything, but the level pacing is good enough that I didn’t get bored or mind what I was doing outside of combat.

The combat is undoubtedly where Evil West shines. It’s not a character action game, but it’s a fairly engaging, exciting action title nonetheless. At first, Jesse has his fists, a rifle, and a revolver. You can punch or shoot things, as well as heal. But Jesse gets new weapons and abilities at regular intervals, which constantly keeps things moving. Before all is said and done, he gets a shotgun, crossbow, electric gauntlet upgrades, a flamethrower, Gatling gun, dynamite, and a rod that electrocutes everything around you. He’s a veritable powerhouse. Evil West focuses on a mixture of shooting and melee. Jesse can aim and shoot with his rifle and crossbow. The revolver isn’t all that useful, as it’s more for the early game. Enemies will often have glowing weak points for you to shoot. Doing so will stun them and knock them out of their next attack. Early on, you’ll fight a lot of regular enemies. But as Jesse gets stronger, these foes are mostly used to pressure you while you’re fighting much larger menaces.

Jesse’s gauntlet lets him parry, pull weaker enemies to him, and dash to enemies. Weak foes will become electrocuted when this happens, which will allow you to unleash a rapid series of upgradable punches. Speaking of punches, Jesse has a default attack string, plus he can uppercut weak enemies and juggle them with more punches or the revolver. You can also punt them at others while they’re airborne. As Evil West proceeds, your repertoire of skills increases — these are all on cooldowns. For a bit, it seems like you’ve got more arsenal than you might need.

However, toward the last third of the game, the difficulty increases. Combat encounters in this game can get seriously tough. The last couple of levels pushed me to my breaking point and I had to use every item at my disposal to stay alive and take enemies down. Fighting here is as excellent as it is exhilarating. The game does a great job of keeping you on your toes. Encounters will often include a mix of multiple strong enemies for you to go up against simultaneously. The game’s field of view is quite narrow and reminiscent of the modern God of War games, however. It can be difficult to see your surroundings, which is annoying. You can’t make this wider, sadly. If an enemy is approaching you, arrows will let you know. Yellow means they’re moving to you and red means they’re attacking. If you’re not wary, you’ll find yourself getting hit in the back with some frequency. But Jesse’s dodge is so useful and fluid that everything is manageable. You can do a short dodge or a roll. The windows on these are wonderful and the combat generally feels very fair as a result.

Evil West only has four boss battles but most of them aren’t that demanding, especially since they tend to have checkpoints at the beginning of each phase. The regular encounters against stronger enemies are much tougher. My game file says it took me nine hours to beat the game, but I’m pretty sure it’s about a dozen hours with reloads. Once you beat it, you unlock a New Game Plus mode, but it doesn’t change up the enemy encounters. There’s an Evil difficulty the game recommends you wait to try out, but early levels will be easy with a fully decked-out character no matter what.

The biggest wastes are that the New Game Plus doesn’t swap in stronger enemies throughout the campaign, and that Evil West has no additional modes. A horde mode or survival mode would have been awesome, so it’s a shame that there’s nothing but the campaign to draw your interest. You can play it with a friend, at least, and you can revive each other when downed.

I very much enjoyed Evil West and I’d like to see more of it. I just wish there was a bit more lasting appeal, as more opportunities to fight these brutal enemies would have made for a more compelling purchase. 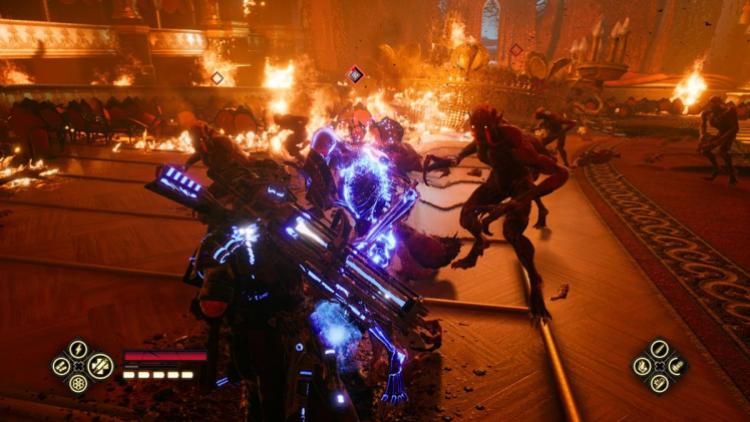 An excellent action game with terrific combat and spot-on controls. The campaign is at a decent length, but there should have been more to do after clearing it.