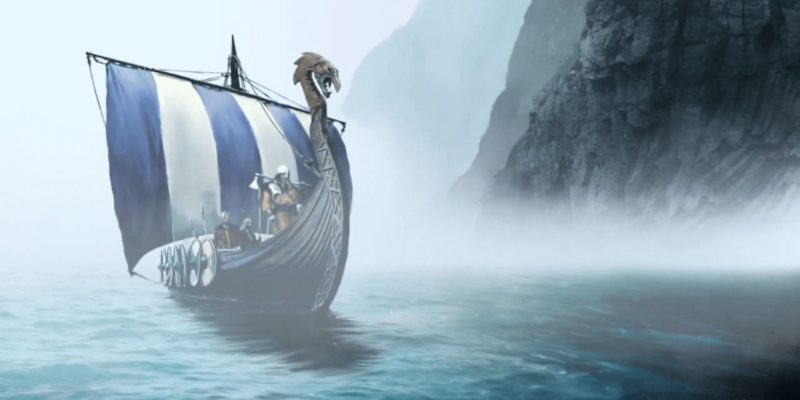 The Kickstarter-aided Expeditions: Conquistador justifiably found an audience in 2013, and continues to be a solid recommendation. In part, perhaps, because there aren’t too many other games going for the combination of a 16th Century jaunt structured around the lesser-spotted mash-up of tactical battles and RPG quest choices.

For their second outing in the series, Logic Artists are taking Expeditions back to their home land and embracing Odin, Longships, and intimidating facial hair. Expeditions: Viking puts you in charge of a struggling clan of hardy Norse, with one eye on protecting that community and another on exploring tales of a distant isle rich in trade opportunities (or plunder). 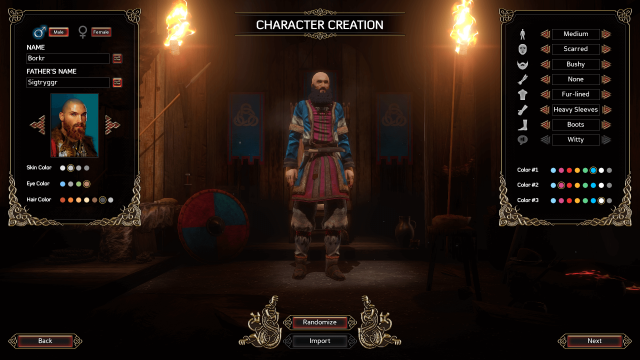 Perhaps the clearest divergence from the first Expeditions title is Viking’s abstraction of the world map. In Conquistador, your band of travellers would roam about on a large, top-down-ish map in King’s Bounty style. All quest and dialogue interactions would happen here, and the only time the map’s ‘layering’ would really shift is when your party got into a turn-based fight. Then, the action would switch to a closer-in hex battlefield.

In Expeditions: Viking, significant travel (and making camp) takes place on a flat world map. Visiting major locations takes you to a rendered space specific for that location where you can walk your party around in real time. Until you trigger some kind of fight, whereupon the hexes appear and things become turn-based.

Effectively, Logic Artists have switched from a single, rendered over-world map to numerous individual locations. This means Expeditions: Viking has a greater number of distinct, physical spaces to explore, and also slightly alters the dynamics of maintaining your party via rest stops. Previously, you made camp whenever your movement on the world map was exhausted. Now, there are designated resting sites on the world map ‘layer’ and it’s up to you which ones to use as you make your way towards a quest destination. 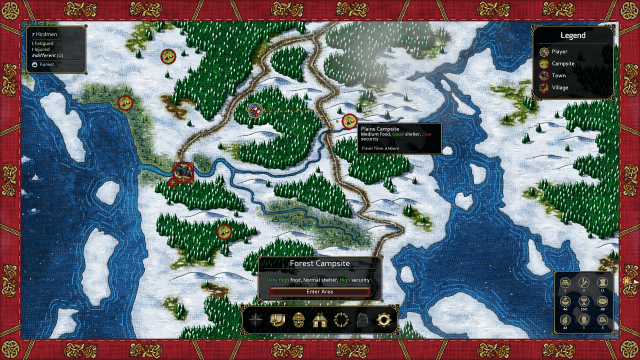 Opting not to rest at all is possible, but it will lead to your characters being fatigued and barely able to swing a sword properly in combat (people who are heavily sleep deprived, as a rule, don’t perform all that well in a fight). Giving characters too much to do during camps will also result in their becoming fatigued. As before, you need to dole out the hunting, food preserving, guarding, crafting, and healing tasks sensibly.

Expeditions: Viking also differs from Conquistador in that you have a home base of loyal subjects to nurture and impress. You’re not just galavanting around a foreign nation (although that might happen in the second half once you’re in Britain), you’re also supposed to be ruling your clan. To that end, you need to expand the village by constructing various buildings, and make sure your actions don’t annoy too many people. Resources for construction are received from quests, and from scavenging around in boxes, bins and barrels.

It’s not entirely clear at this point whether you can lose the game by alienating too many of your clan, but quest choices definitely have an impact on their opinions. Recruit somebody into your party who was previously involved in an attack on the village, for example, and some of the more self-interested clansmen will react poorly (while those who see the value he can add to the group will be pleased). 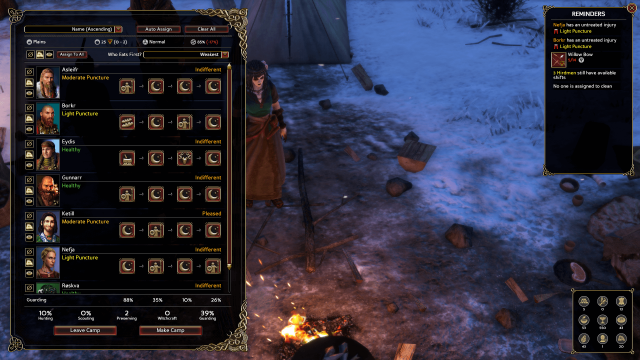 Camping is just as much of a logistical mini-game as ever.

Like Conquistador, Expeditions: Viking is inspired and based upon historical details but has plenty of speculative aspects too. The loose realism is largely reflected in a turn-based combat system based around outwitting fellow Vikings, bandits, and rivals. However, there’s also spooky stuff happening inside ancient tombs, so not everything is quite so grounded.

Combat skills for your warriors include the ability to punt people away with a kick, hook shields aside to expose the person behind, and crippling arrow shots to impair movement. Status effects like poison and burning can also be inflicted with the right skills or items. As you tend to be outnumbered in the turn-based, hex battles, focusing on outright killing (or incapacitating, you can always opt to be non-lethal which can have effects on quests) one person at once seems wise. All warriors on a ‘side’ move and attack during a single turn, so the fewer opponents that are able to take shots at you during that turn, the better.

Enemies with the ability to heal others are primary targets, and it also pays off to use terrain to your advantage or prevent foes from moving with traps or abilities. Cover plays a role too, able to protect you from ranged shots (unless they smoke you out with a ‘Signal’ arrow). It’s stuff that’ll be familiar to anybody who’s played something like XCOM (or, indeed, Conquistador), but looks to be providing a fair amount of tactical depth in terms of positioning and moment-to-moment decisions. Conquistador eventually ran into the issue of certain skill choices and warrior types being much more useful than others, so hopefully Viking can avoid that. 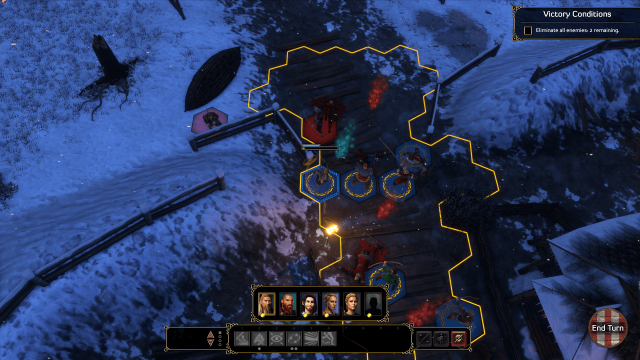 Into my bottleneck of death you go.

Most of the other problems I stumbled into can probably be attributed to the early nature of this preview build. There’s always a chance that quest oddities like stunned, teleporting wolves will slip through the net to release, but you’d imagine that’s the sort of bug that’ll be fixed before Expeditions: Viking comes out. Bits of the general UI are said to be incomplete too, so the final build should hopefully feature missing things like a list of your current resources on the building construction menu (currently, it doesn’t seem to be there). A few overly-anachronistic pieces of dialogue could probably do with a fresh pass, too. Not that the game is obliged to go for ultra-realism in its conversations (if it’s even possible to gauge what that would look like); but seeing a Viking call someone a ‘son of a bitch’ seems a bit out of place.

Those are the usual preview quibbles and most are noted as being actively addressed, so no major scares there. For the most part, Expeditions: Viking seems to be following the traditional videogame sequel path of refining aspects of the original within a brand new setting. After surprising and delighting people with Conquistador, a chance to follow up that game with a rugged, robust party-RPG-meets-hex-combat in the Viking mold is no less than Logic Artists deserve.

Expeditions: Viking is due for release in Q1 2017.