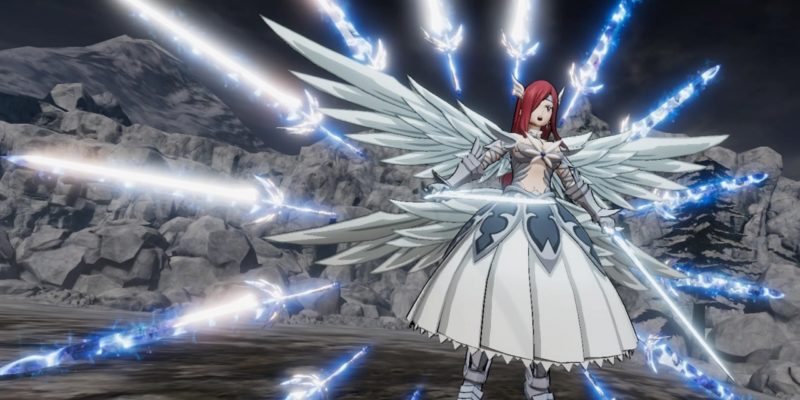 Fairy Tail just launched on Steam and brings the magical world of Fiore with it. This is the first video game adaptation of Hiro Mashima’s famous manga series to come to the west and thus expectations are high. Many anime games don’t make their way to PC so it’s important to analyze how good a port we’re getting when they do. Considering that, let’s kick things off with a look at the minimum and recommended specs:

Note: If you’re interested in how good a game Fairy Tail is be sure to check out our official review. It covers the story, general gameplay, and content in-depth.

All system requirements are courtesy of the official Fairy Tail Steam store page. I’d say given the game’s general appearance these spec requirements are fair, although 16 GB RAM feels a little high for recommended. In this day and age just about every gaming rig imaginable should have a GTX 1060 or above, so I doubt many will have difficulties with their GPU. Both CPU requirements are not overly steep and if my laptop is anything to go by, which sits slightly below the recommended, this requirement is more flexible than it suggests.

Fairy Tail‘s graphics settings are awkwardly split up into two separate menus. From what I can tell, they’ve used the same design structure of the general game settings which suggests this is perhaps a result of lazy porting. It’s not a deal-breaker but the overall waste of screen space does raise questions as to how much time was spent on such an important aspect.

In the settings, you can opt into either full-screen or windowed mode. There is currently no option for borderless windowed which is a shame given the game’s 60 FPS frame rate cap. The reason players tend to choose full screen is to get the most out of higher refresh rate monitors. With that option gone, it would have been nice to be able to tab in and out of Fairy Tail easier. 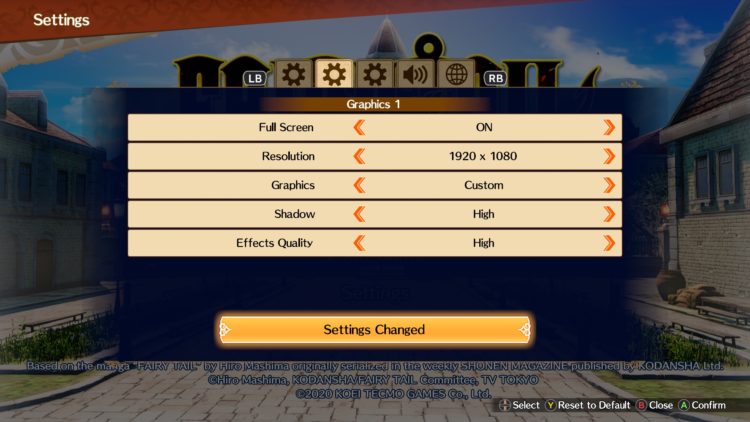 Changing the generic graphics option seems to only affect shadows and general FX. What I found particularly unusual is that the second graphics tab has some common options on toggles rather than sliders. For example, you can turn FXAA anti-aliasing on or off but there are no options for SSAA, MSAA, or TXAA.

Otherwise, this second tab lets you toggle ambient occlusion, dynamic reflections, depth of field, and bloom. The top two should be toggled at all times since they have little effect on the frame rate whilst the latter two are personal preference. I will say though that I think Fiore and Fairy Tail‘s art style as a whole does benefit from having both enabled. 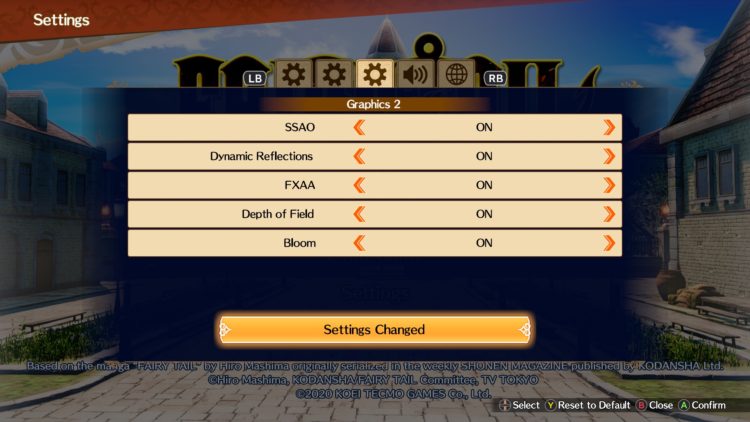 The resolution options are fairly standard beginning with 1280 x 720 and going all the way up to 3840 x 2160. However, getting both 1440p and 4K to actually appear can be difficult. From what I can tell, it appears that Fairy Tail tries to scan your monitor’s native resolution and only provides the options it thinks are suitable. Whilst irritating, a couple of restarts in full screen usually fixes this problem. It’s worth keeping in mind that Fairy Tail is technically optimized for 1080p due to its PlayStation origins so you might run into issues at higher resolutions.

Alternatively, you can right-click Fairy Tail in steam, go to properties, local files, and then browse local files. From here open ‘game.ini’ and change the width and length to whatever resolution you desire. Here you can also freely rebind controls for both keyboard and controller, which isn’t doable in-game.

As mentioned earlier, Fairy Tail is locked to 60 frames per second. I have tried just about every solution you can imagine but I have yet to find a way around this. It’s possible that a workaround could be found in the near future but for the time being, any high refresh monitor users will have to cope.

Thankfully, with Fairy Tail being a narrative-driven turn-based JRPG, it’s perfectly fine at just 60 FPS. And frankly, we should consider ourselves blessed because the PlayStation 4 version is capped at a mere 30 FPS. The Switch version is even rougher at just 720p, 30 FPS.

There are a handful of pre-rendered cutscenes that run at just 30 FPS. Perhaps pre-rendered isn’t the right description. But rather they’re basically MPEG4 videos being played in-game that look worse than the regular gameplay. It’s a little jarring to see a cutscene look half as good as the regular gameplay. Presumably, these were lifted straight out of the console versions.

Here’s a breakdown of how the major settings actually look in-game. This covers the shadows, anti-aliasing, FX, ambient occlusion, bloom, and depth of field. 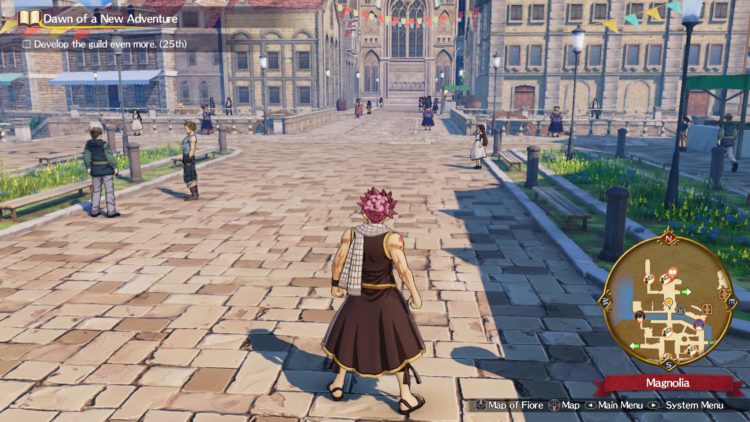 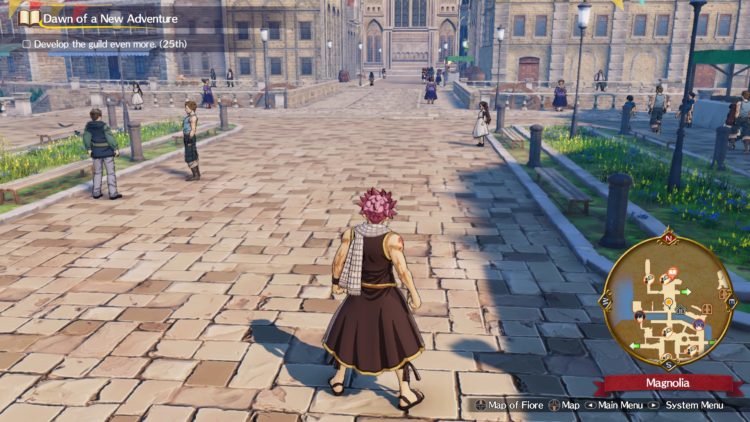 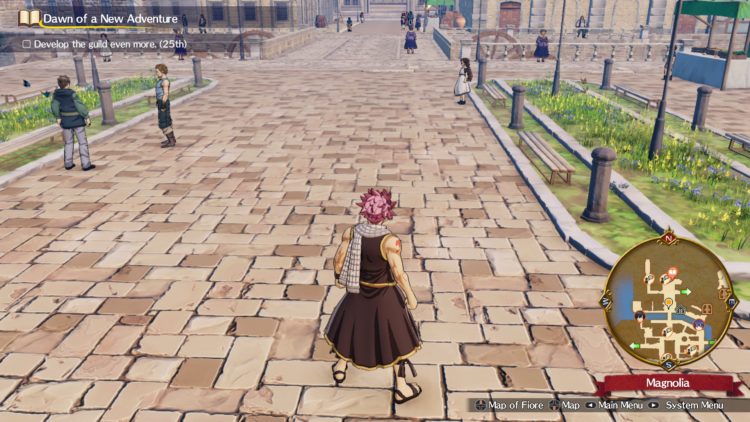 Unsurprisingly, having your shadows cranked up to max is going to give the best results. However, if you’re looking to get more frames on a low-end device I actually think Fiore looks better without shadows than low shadows. There’s something awkward about the blurred shadows on lower settings that’s not quite right. 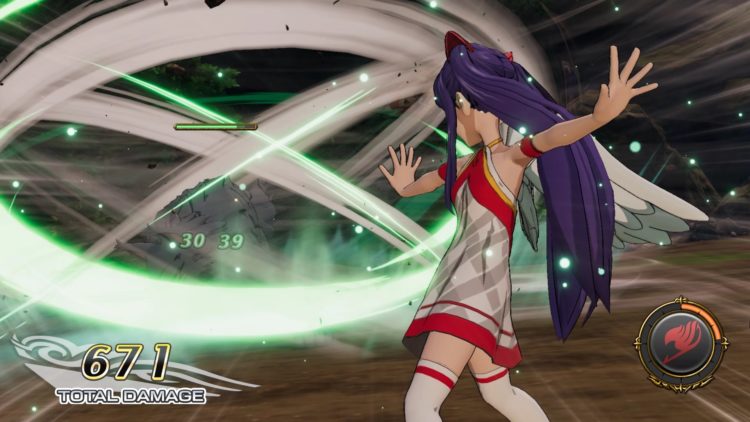 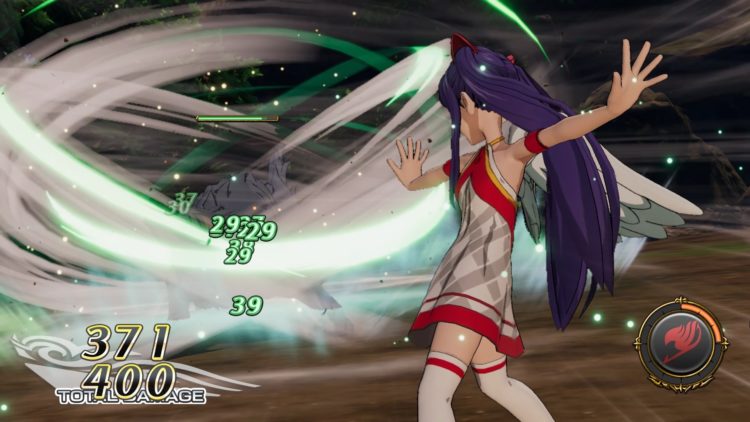 The difference here is relatively minor but I did notice that, when using low effects quality settings, some attacks were less visually pronounced. Either way, this setting can be widely ignored as it seems to have next to no impact on visuals or performance. 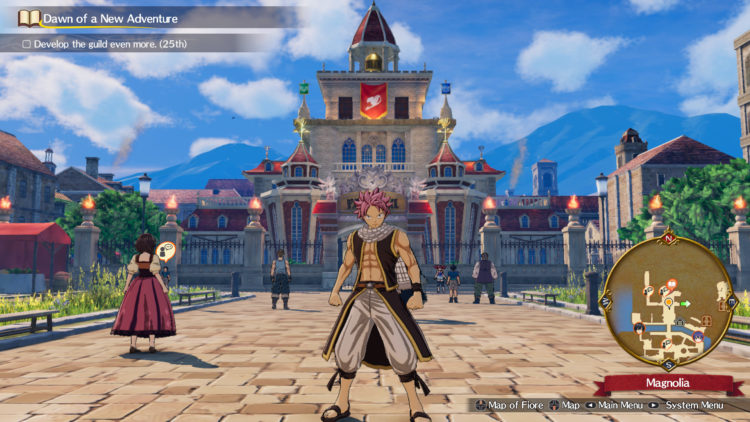 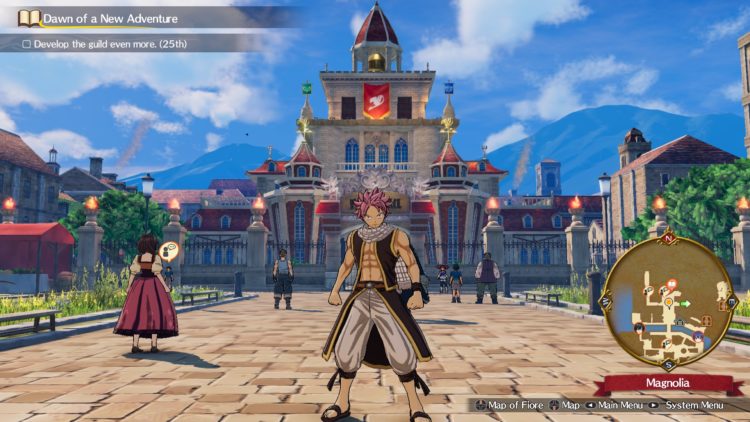 Although anti-aliasing doesn’t seem to affect environmental details much, it is a game-changer for character models. To fit the Fairy Tail aesthetic, every character in-game has a black outline drawn around them. With FXAA enabled, this outline is smooth and blends into Fiore well. When it’s disabled, this outline becomes jagged and generally unpleasant. 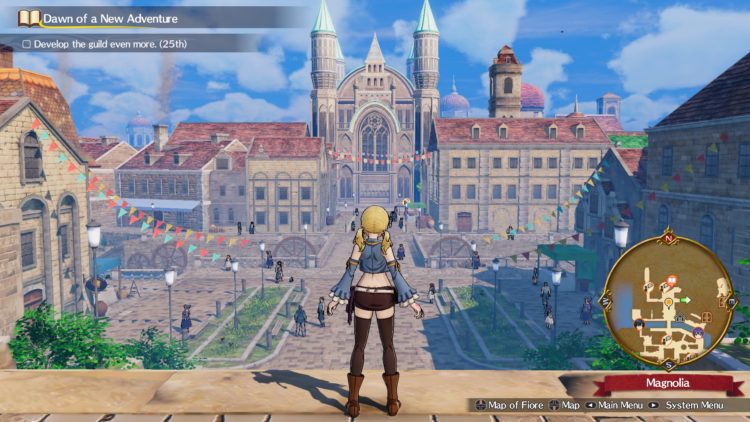 Bloom and depth of field, On 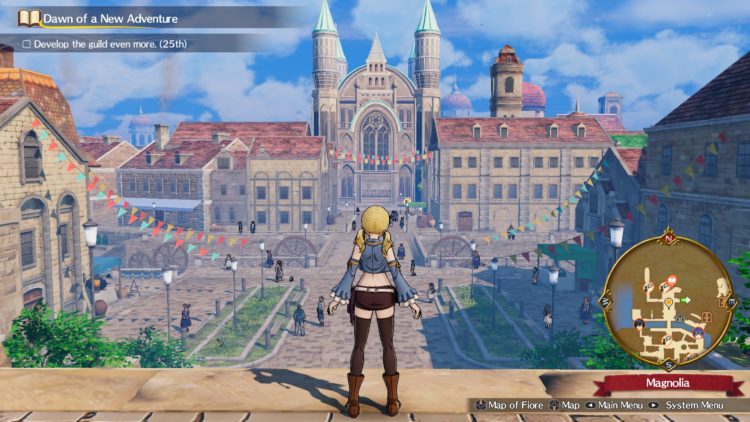 Bloom and depth of field, Off

Extremely minor visual differences that are almost unnoticeable without you trying to see them are also present. However, there are a handful of locations where bloom can spice things up a little, so I’d recommend keeping these settings enabled. 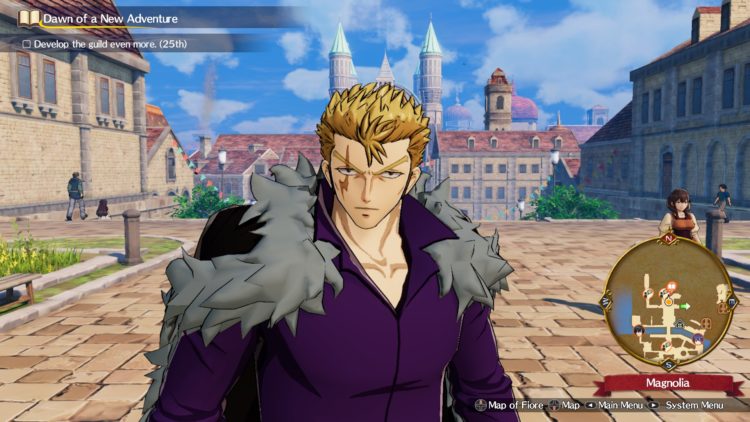 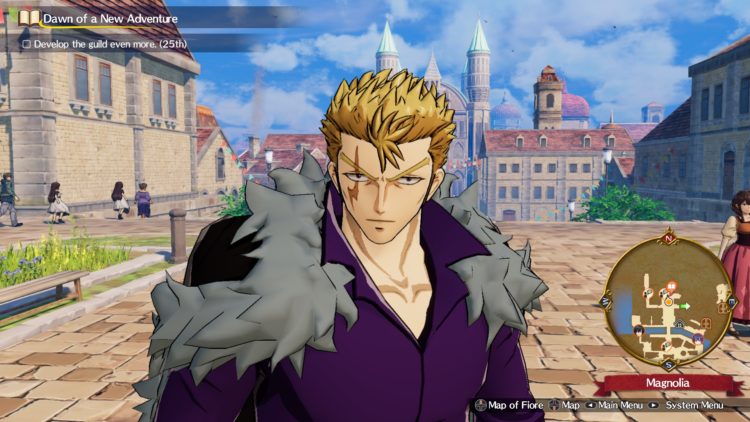 Although minor, you’ll notice that, with SSAO enabled, Laxus has a shadow on his neck from his overcoat. Equally, many female characters with long hair such as Erza and Wendy will only generate natural shadows from their hair with SSAO enabled. This isn’t a huge difference, but it is going to make in-game models look slightly better.

Here’s a breakdown of how the world of Fiore looks when at high settings at 720p and 1080p. 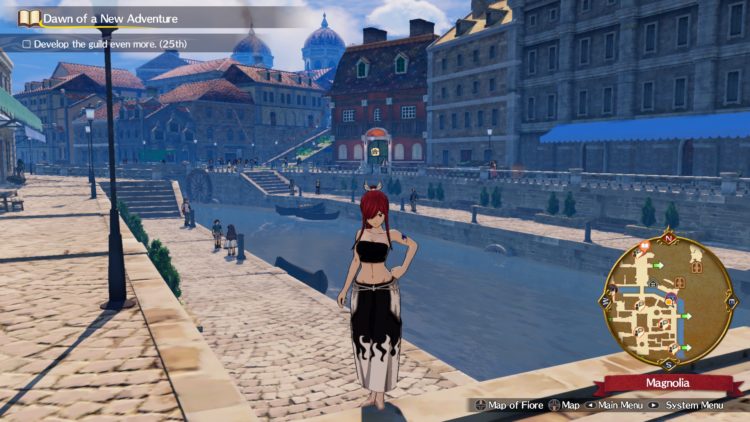 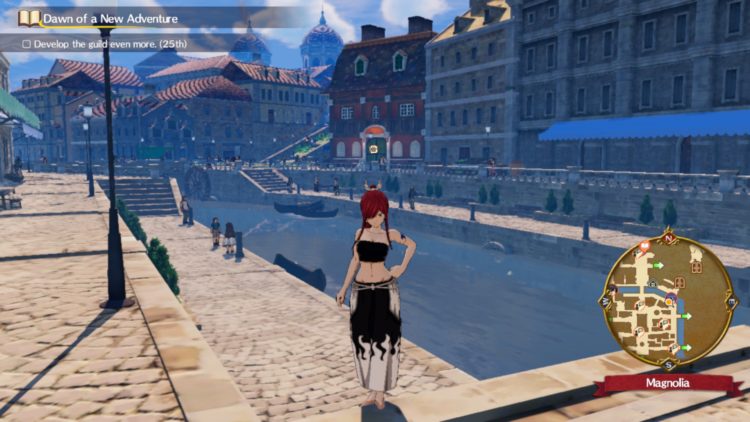 Unfortunately, I do not currently have access to a 1440p or higher monitor and thus Fairy Tail won’t let me try out higher resolutions. When I changed the values in the settings file, it crashed my game when attempting to load anything not native to my monitor. Either way, Fairy Tail is kind of ugly at sub-1080p but looks nice once you hit that threshold. 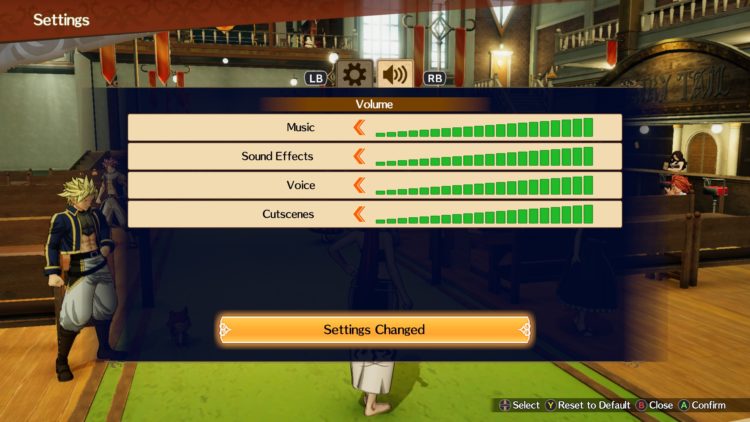 There’s not too much to say here but these basic four settings do work well enough all things considered. Obviously, there are no multiplayer options like having a push to talk wouldn’t make much sense. On top of basic audio settings, you can also set your user interface to one of six languages. These are English, French, Simplified Chinese, Traditional Chinese, Japanese, and Korean. All voicing is native Japanese and accurate to the anime. Unfortunately, fans of the dub will have to explore Fiore with the original voice acting as there is no support for English voices.

Fairy Tail is a capable port that plays at a smooth 60 FPS with very few performance issues. However, it could be argued that the port is a little overly simplistic and lacking in some of the standard PC options we’ve gotten used to. Even with that said, I never found these oversights so troubling that they negatively affected my ability to enjoy exploring Fiore. Although native support for higher refresh monitors would be nice given that Fairy Tail isn’t the most demanding game. Also, many Steam users have complained about the issues with playing on a keyboard so keep that in mind if you weren’t planning on using a controller.

Dying Light – Hellraid — Is It Worth It?

By Andrew Farrell12 hours ago
Features

Romance of the Three Kingdoms XIV -- Guides and features hub

Romance of the Three Kingdoms XIV: Unlocking the "Gathering of Heroes" scenario