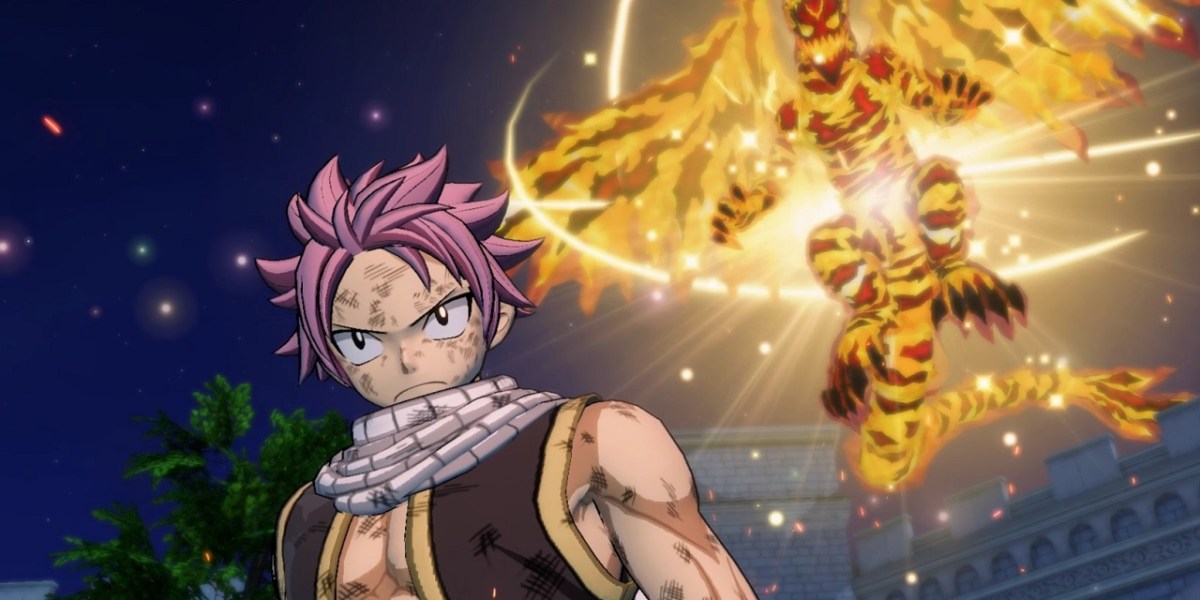 I’ve played my fair share of anime games and most are of similar quality. I usually enjoy them because of my personal tastes but struggle to recommend them to others. As much as I love the likes of Neptunia and Atelier, I wouldn’t necessarily call them great games. In this regard, Koei Tecmo’s adaptation of the popular shounen franchise has surpassed my expectations. Fairy Tail is a better game than you think.

Mechanically speaking, Fairy Tail doesn’t do too much out of ordinary. You engage fights by either running into or preemptively attacking wandering enemies. If you attack them without them noticing, you’ll benefit from a speed stat boost for that fight.

The clearly Persona-inspired attack wheel makes navigating your various moves, special attacks, and items easy enough. Speaking of attacks, you have the choice of either using a standard attack to conserve MP or one of the selected character’s signature magic attacks.

Fairy Tail does a good job of representing each character’s role in the show without damaging the overall game balance. For example, support characters like Wendy and Lucy are still capable of dishing out some hefty damage. However, the DPS-centric wizards like Erza, Laxus, and Natsu can be built to deal devastation. 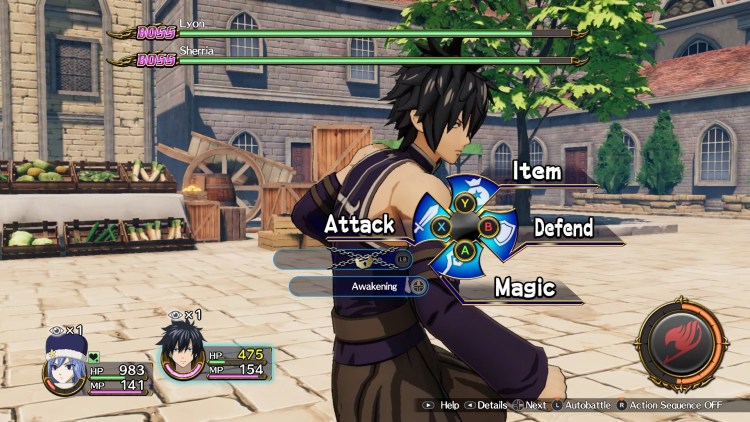 What this means is that if you have a particular idea of what team you want to build or what character you want to make ridiculously strong, there’s nothing stopping you. This is further helped by the Lacrima system which lets you fine-tune each character’s stats. At one point I was rocking a tanky Gajeel with extra aggro and then using both Wendy and Lucy to assist his sustainability. It’s impressive how Fairy Tail lets you build your team however you want without abandoning the source material’s core identity.

Many of the mechanics present are lifted from Atelier but that isn’t necessarily a bad thing. By using an established series’ ideas Fairy Tail manages to deliver a well-practiced and polished gameplay experience. To succeed you don’t always need to reinvent the wheel.

A rough re-telling of the story

Perhaps Fairy Tail‘s biggest downfall is its inability to convey the same emotions the original shounen is famous for. Many segments in-game have been changed for a variety of reasons. From what I can tell, the biggest being that it was too hard to create particular scenes when certain characters aren’t fully modeled.

The most egregious example of this is during the Grand Magic Games arc where the entire Naval Battle event is skipped over. Instead of actually playing it, we get a generic summary of what happened. This undermines the entire point of having a video game adaptation — giving your fans the ability to interact with a franchise they love.

At other points, Koei Tecmo has instead opted to tweak events to still make sense with what is available. For example, the Magic Power Finder competition is no longer between the seven wizards left after Erza’s initial victory. Instead, your entire team has to work together to deal enough damage to pass the event. Given that important characters in that event like Jura and Orga aren’t modeled it would have felt awkward trying to directly recreate the original shounen’s story. 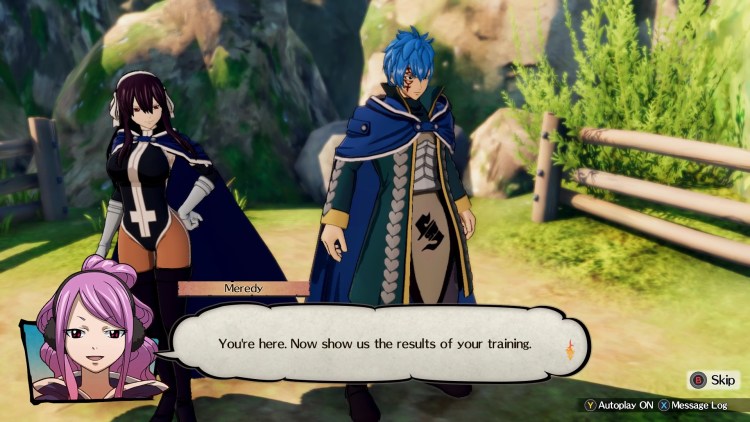 I much prefer this latter approach as, while it isn’t strictly lore accurate, it at least creates a coherent narrative. When Fairy Tail skips over important story elements it can get a little confusing as to why later events happen. And this is from the point of view of a Fairy Tail fan who has watched and read just about everything out there. Imagine how hard this is going to be for someone new to the franchise to follow.

On the bright side, there are plenty of interesting original events and interactions fans won’t have seen before. From character bonding missions to jobs taken from the Request Board, Fairy Tail is not lacking in unique lore. It’s just a shame that for every piece of interesting new lore there’s a missing piece of the shounen’s already established narrative.

Outside of the main story, you have the option to partake in several side missions. The Request Board can be used to pick up jobs that reward items, cash, and guild reputation. Building up your guild’s reputation allows you to unlock new facilities and proceed through the main story.

These facilities offer a variety of useful perks and bonuses that become crucial in the late-game. Examples include improvements to the EXP gained from non-active members, being able to receive higher-quality jobs more often, and the ability to craft higher level Lacrima. 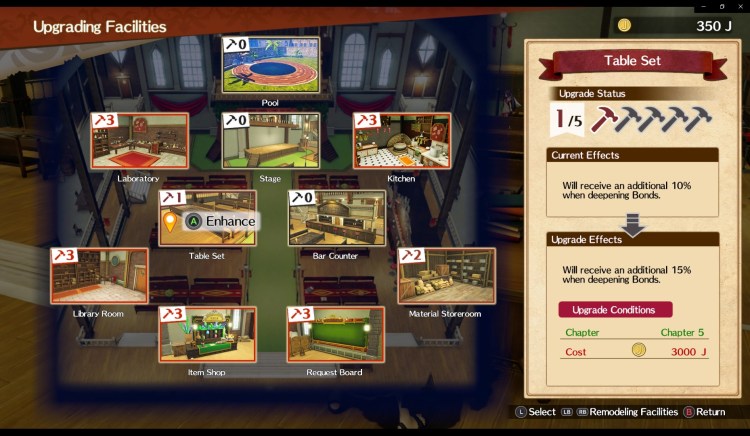 Another upgrade system focuses on improving the ranking of the shounen’s iconic wizards. By investing points earned from requests, you can unlock passive effects, stat boosts, and signature moves. Some of these are extremely powerful and take some time to acquire. At the very least, they should keep any completionists preoccupied.

You can also complete both community service and Guild Rank goals to obtain advanced crafting materials. These are required to develop superior lacrima which allows you to further mold each wizard’s desired skillset.

In regard to extra content, the only oversight I’d point to is the lack of collectibles present. Collectible items can be a great way of furthering completionist difficulty whilst also encouraging players to experience more of the game. I feel Fairy Tail as a game would have benefited from a system like this but it’s hardly lacking in content regardless.

I usually get annoyed when PC games cap themselves at 60 FPS as I know my system can manage much more. However, in the case of Fairy Tail, I am willing to make an exception. This is because despite being locked at 60 FPS, it is a truly flawless 60 FPS. In my time playing through the story I only counted three instances of minor frame drops.

Regarding settings, the standard graphics options are there although there’s nothing in-depth. You can tweak shadows, effects, anti-aliasing as well as a handful of cosmetic enhancements. There is no option for borderless windowed with players having to settle for either full screen or standard windowed. Regardless of settings, I couldn’t up-cap the frame rate but it’s possible that a workaround could be discovered in the future. 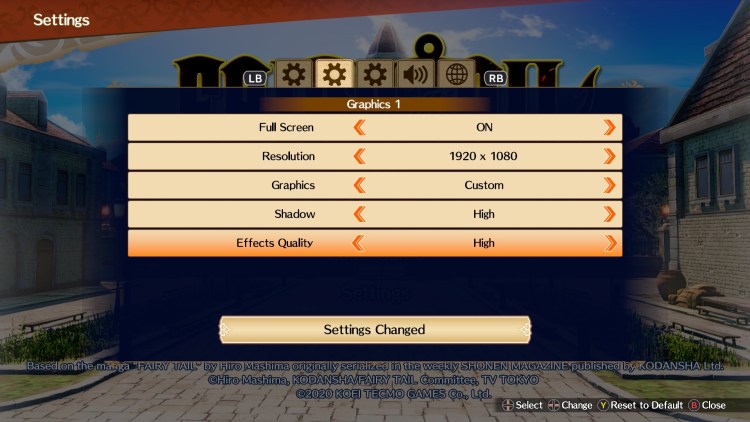 The visuals are very much up my alley. I wouldn’t say Fairy Tail is an incredible looking game but rather one that has a certain charm to it. I can appreciate how Koei Tecmo has tried to keep the shounen’s general aesthetic whilst still making the character models look sharp.

Some environments are a little rough and character expressions can be overly simplistic, but I didn’t find either of these issues too troubling. For me, the achievement of creating a colorful and lore accurate rendition of Fiore that I can explore is more than enough.

Well worth your time

Fairy Tail surpasses expectations and provides a damn good JRPG experience. Its turn-based combat-focused gameplay is hardly revolutionary but should feel familiar for genre veterans. Even more so if you happen to enjoy the Atelier series. In saying that, some elements of the PC port are lackluster and the second-rate storytelling will leave many disappointed. Even so, this is an overall high-quality product that reaches heights most anime games can only dream of.

A lot of anime games are full of personality but lack refinement and polish. Fairy Tail undermines those expectations by being well made whilst still capturing what made the original manga so special. Newcomers may find the limited retelling of the plot hard to follow but franchise veterans should have a blast.