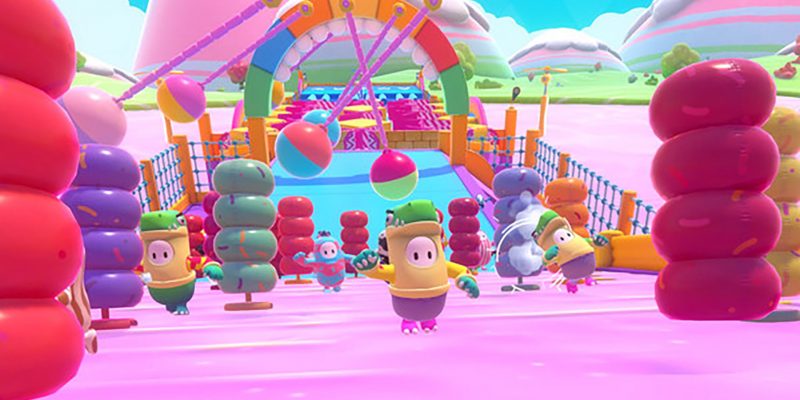 Fall Guys is heading to the future. The official Fall Guys Twitter account shared today a short teaser video of Season 4’s theme, called “Fall Guys 4041.” Very little information was revealed about the upcoming season, but it seems Fall Guys is going 2,020 years into the future. Additionally, Fall Guys is hosting a contest in celebration of the new season.

The 7-second video showed the Fall Guys logo surrounded by neon shapes in a bright pink grid environment. Robots, spaceships, and squiggles floated around the screen as upbeat techno music played. The clip seems to give off more ’80s vibes than anything, but according to the tweet, Fall Guys is “traveling to the future.” Maybe the year 4041 will just be a repeat of the ’80s.

To celebrate Season 4 “coming soon,” Fall Guys launched a giveaway contest. All you need to do is follow the Fall Guys account and retweet the Season 4 teaser tweet. Then, reply to the tweet by finishing this sentence in your own words: “#FallGuysSeason4 is…” Twenty winners will be chosen to receive 20 crowns each. People have already started flooding the replies with submissions, so get yours in now.

For Season 4, we're traveling to the future…

Giveaway to celebrate:
– Follow us and retweet this tweet
– Finish this sentence in your own words as a reply:#FallGuysSeason4 is

20 winners will get 20 crowns each! 👀 pic.twitter.com/USrruU7LtT

The preview left fans wondering what Fall Guys Season 4 may hold. Guesses have started pouring in, though Fall Guys has yet to confirm anything. Some users took note of Fall Guys’ tweet from just a few hours ago. Fall Guys shared some concept art for skins inspired by electronic musical duo Daft Punk, who broke up this week. The art featured gold and silver shiny suit jackets, plus futuristic helmets and guitars. There’s no denying the skins would fit into Season 4’s futuristic theme.

There’s no word yet on the official release date for Season 4. The battle royale is currently in Season 3 and received its Season 3.5 update earlier in February. There’s still plenty to do this season, including a collaboration with Cuphead that includes two Fall Guys skins inspired by the animated game.