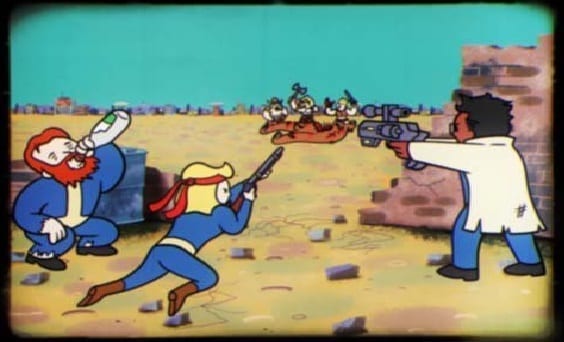 Although Fallout 76 has earned its fair share of criticism from in-game mechanics to questionable marketing, it’s still good to know that Bethesda has the well-being of the player base in mind in terms of more extreme situations. One such example presented itself when a user by the name of AJpls tweeted out that he had encountered homophobic players who attacked their group.

Called themselves the "gay eliminators" "cleansing the wasteland of the queers" "know what we did to your people back then, we killed them" THIS is the stuff said to us tonight when playing Fallout. @bethesda @BethesdaStudios @Fallout #Fallout #Fallout76 pic.twitter.com/zwPuz7AbsG

The ringleader of this group, NathanTheHicc (usernames don’t get more fitting than this), started rambling on about his bunch “hunting down all queers” and “exterminating gays.” When players surrounding AJpls were downed, NathanTheHicc’s group shouted, “Queer down!” As the drunken bunch killed more players, they started laughing about “eliminating gays” and “decontaminating AIDS.”

NathanTheHicc’s team kept hounding and harassing AJpls, asking him why he wasn’t wearing any clothes and goading him to fight them. Then, AJ followed the only recourse possible — he reported them to Bethesda and tweeted it. His report now has over 29,000 views. AJpls also noted in a follow-up interview with Eurogamer:

In NathanTheHicc’s case, he remains unapologetic. He has since uploaded a video on YouTube titled “Cleansing The Queers” which has received a smattering of views. Some comments, though, even defended the user. For some strange and inexplicable reason, people felt it was “okay” to use homophobic slurs while hounding other players because “it’s a post-apocalyptic wasteland.” You can see these types of reactions below: 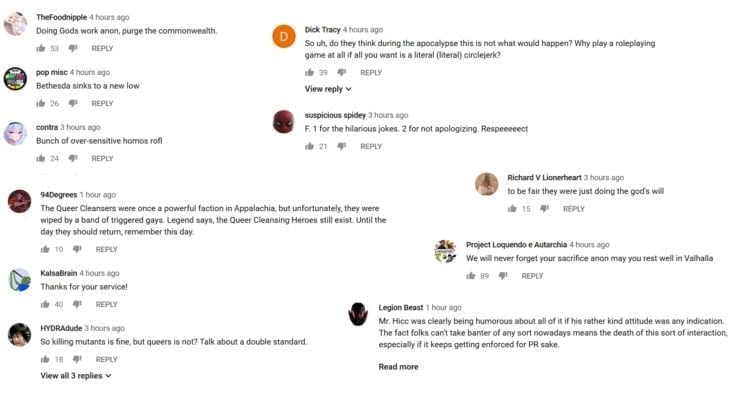 So the question remains is: Why do people still do this? The answer is fairly simple, actually. It’s online anonymity.

Previous psychological studies have shown that being anonymous creates disassociative tendencies and that’s magnified even more so by the internet and the reach you have. For instance, a study in 1969 asked students to administer an electric shock to another person. Some had their faces visible and some wore hoods. It was discovered that subjects who wore hoods and thus remained anonymous were more likely to go through with the action.

This disinhibition allows users to separate themselves from their own actions. What we normally wouldn’t do in any real-life situation leads to free reign on the internet. We perceive that there are no repercussions or that it isn’t part of reality. Simply put, the more anonymous and hidden people are, the more they feel comfortable to cause harm to others.

The reality here is that what we say and do online has an impact with other people. This is especially true in cases where people choose to be offensive or hurt others. There’s a good chance that Nathan and his buddies may feel disassociated from their actions because they’re online, but they’re also likely to be impacted if the tables were turned.

To date, numerous game developers have come forward to seek solutions to combat online toxicity. One example is the Fair Play Alliance with members such as Blizzard and Riot Games. The group even provides a distinction that there’s a difference between normal trash-talking and banter with hate speech.

Bethesda initially handed NathanTheHicc and his team a three-day ban as a first and last warning. As AJ’s report blew up, they’ve doubled-down and turned that into a lifetime ban.

Looks like the only thing that got exterminated was Nathan’s Fallout 76 account. In any case, the lesson we learned here is that it pays to be nice, even in the post-apocalyptic world of Fallout 76.

NylonGate: Did Streamers Grab Up All The Quality Fallout 76 Bags?