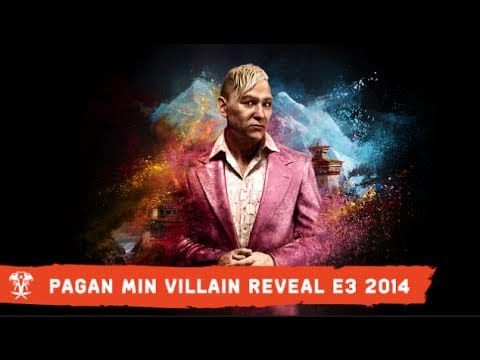 Hello, I am a well-adjusted individual.

Ubisoft’s E3 press event opened with a little look at Far Cry 4. It was effectively a trailer, although I think it pretty much showed the opening five minutes or so of the game itself.

It depicts a lovely bus ride in the Himalayas, which is undergoing a routine border passport check by some men with guns. It’s okay though, your Far Cry 4 protagonist has a US passport and it looks real. No problem.

Until things go a bit wrong, people panic and the guards start shooting. Then a strange British fellow with an odd white hairstyle shows up in a helicopter and reprimands the guard in charge for screwing things up. And by “reprimand” I mean “stabs with his pen.” Said strange British man seems happy to see you, though. He recognises “those eyes” and seems to act in a way which suggests you’re family.

In fact it seems like whoever he is, he’s the guy who invited you here in the first place. He even takes a photo of the pair of you. It’s all quite odd, but I’m already quite taken with the antics of strange British villain man. Far Cry does good baddies, it seems.

Far Cry 4 is coming to the PC on 18 November. It looks weird and confusing at the moment. That’s alright by me. Official video to come, but for now here’s a stream recording courtesy of YouTube.