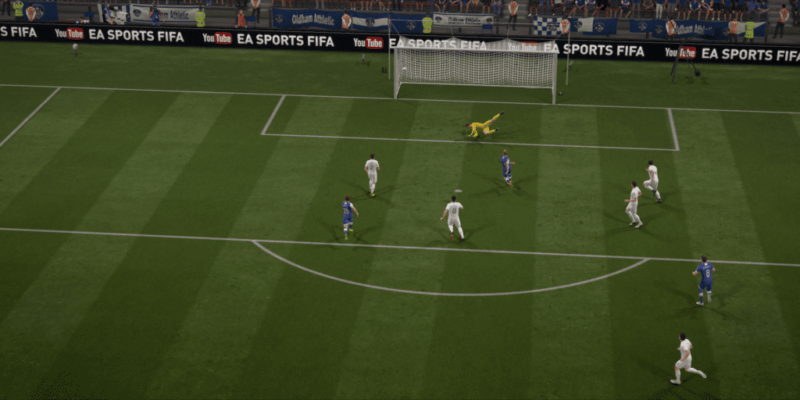 EA’s PC versions of FIFA have been relatively reliable in recent years, and FIFA 17 brings largely the same options and (avoidable) irritations as prior entries. A switch to the Frostbite Engine hasn’t changed a great deal in that regard, though it has introduced some prettier lighting effects and slightly uncanny Premier League manager faces.

So, have the at-this-point-almost-traditional FIFA graphics settings changed at all for FIFA 17? Let’s have a look. 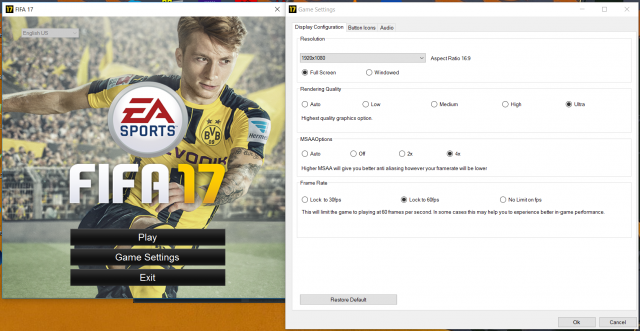 They actually have! Very slightly. The ‘Rendering Quality’ options have expanded from Low/High to include Medium and Ultra. Exciting stuff. Otherwise, it’s the usual set of MSAA choices, and the old standard set of 30/60/Unlimited frame-rate options. More on that in a bit when we get to sorting out the lingering 30fps locks.

It’s not obvious from the screenshot above since I’ve got a pretty basic 16:9/1080p monitor, but FIFA 17 does support 4K resolutions (I’ve checked that via downsampling), and 21:9 widescreen (I’ve not checked this directly, but seen enough other people confirm it to believe it).

While we’re at it, here’s a comparison between FIFA 17 on Low rendering with no AA applied, and Ultra with 4x MSAA. I couldn’t get identical shots, but you get the idea. 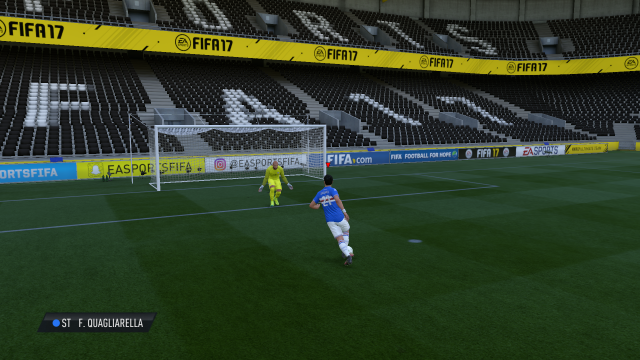 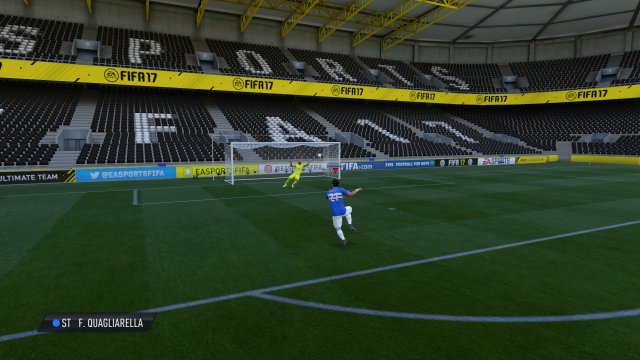 FIFA 17 on Ultra. AKA: Basically the same but with AA now.

The clearest difference is with the anti-aliasing (or lack of), really. In terms of the Low/Ultra rendering, I’m actually not sure where I’m supposed to be looking for major discrepancies. I don’t think it’s the player models, because here’s Harry Kane on both Low on Ultra. 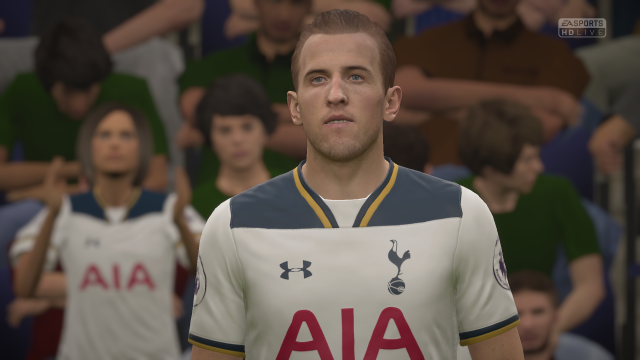 His name sounds a bit like Hurricane. This is the Low quality shot. 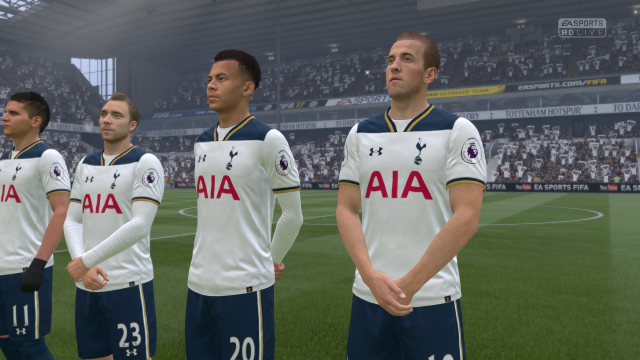 And here’s his face on Ultra. I know, not a great comparison, but I’m not spending my life playing matches as Spurs.

Not exactly a vast gulf in quality, there. Again, it’s just the AA which stands out to me. Still, if you’re on the cusp of being able to run FIFA 17 based on the system requirements, the lower rendering option is presumably worth a try. The MSAA options appear to be the most immediate things to scale down though, if you’re struggling to maintain a smooth frame-rate.

Speaking of frame-rates, FIFA 17 once again does that weird thing where the menus, replays, goal kicks, and various other bits are locked at 30fps. Even if you set the game to a locked 60. Hell, even if you set it to ‘unlimited, please’.

Don’t worry though, there is a way to remove this partial 30fps cap. This is the AMD solution, since that’s the type of card I have.

First, here’s what didn’t work at all for me, despite the internet swearing blind it was the answer: setting a 60fps limit in a FIFA 17 profile in Crimson, setting v-sync to Always On in Crimson, doing both of those things, using the usually dependable RivaTuner to lock in a frame-rate of 60. None of those things could remove the 30fps lock.

The only way I found to lock every part of FIFA 17 to 60fps on an AMD GPU is as follows. Download RadeonPro (yep, it’s old now, but still handy). Add the FIFA 17 exe as a new profile. Go to the ‘Tweaks’ tab. Then select ‘Dynamic’ from the drop-down v-sync control menu. Also, if the bottom corner just says ’32 bit’, click it to switch it to ’32/64 bit’. It should look like the image below, basically. You don’t need to change anything else at all. 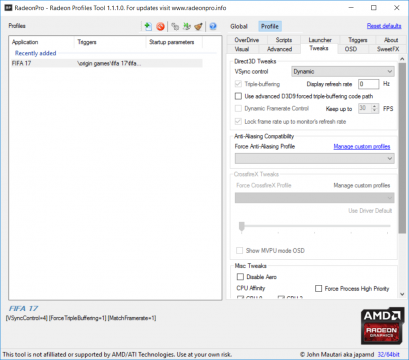 You can click to enlarge this too. Or squint really hard.

Enjoy your new 60fps FIFA 17 menus and goal kicks. This will work with the game’s frame-rate set to either 60 or Unlimited, but I had smoother match performance with it on Unlimited (possibly because then RadeonPro isn’t competing with EA’s own frame-cap).

So, what if you have an Nvidia GPU? I don’t, so I can’t say with absolute certainty that this is the solution, but the ‘Adaptive V-Sync’ option built into Nvidia’s own driver software should do the trick. I’m pretty sure that’s just what RadeonPro is forcing on the AMD side. 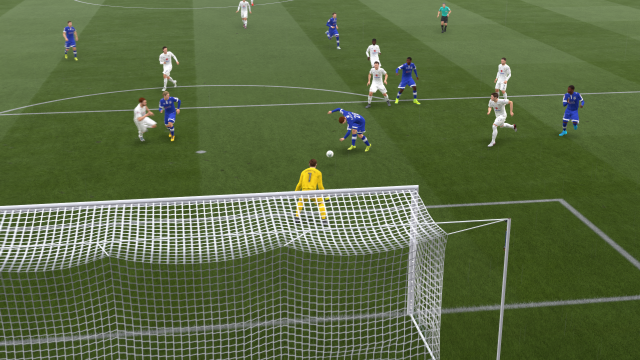 And now a break for some interpretive dance.

Whether you opt to force 60 across the board or live with EA’s ongoing weird decision to keep certain aspects of the game at 30, the match performance should feel smooth. Aside from a periodic micro-judder that seems to sometimes pop up during a rapid transition around the center of the pitch, FIFA 17 has been a rock solid 60fps for me throughout. As I’d expect, frankly, being well inside the recommended system requirements.

The game’s PC version oddities are mostly contained to the online side of things. Since I only got review code late yesterday, I’m not yet in a position to judge whether EA’s servers are up to the task this year. That’ll be something for the full review in a few days time. But something that is worth noting is FIFA 17’s aversion to alt-tabbing. If you alt-tab out of an online match while running in Fullscreen, the game is liable to crash. If you do it while windowed, you’ll be disconnected. Not ideal, really.

There are also early signs that the switch to Frostbite is, contrary to hopes, going to do nothing to prevent the usual rampant cheating in PC Ultimate Team. Again, I’ll need to look at this in more depth myself, but things don’t look too promising there. 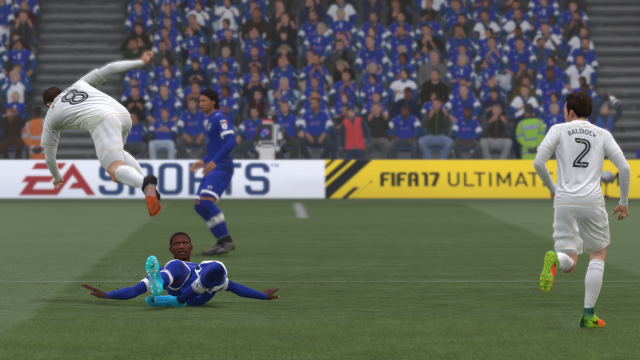 Speaking of rampant cheating, this MIGHT be a foul.

Mostly then, it’s a familiar story for FIFA 17 on PC. Once you’ve jumped through a couple of technical hoops, it’s possible to get a smooth 60fps (or higher, if you have the hardware and monitor for it) across the board. The inclusion of 21:9 widescreen support is a welcome new addition, and, while it’s been there in prior PC FIFA titles too, 4K support is nice to have as well. If the change to Frostbite really hasn’t brought any further anti-cheat vigilance then that’s going to be a major disappointment, but it has at least introduced some improved lighting effects.

Overall, some minor steps forward for an annual PC series that’s been a pretty reliable version these last few years. It’s baffling that EA persist with the mixed 30/60fps stuff though (even through a switch to a new engine); and more could clearly be done to protect legitimate Ultimate Team play on PC, so there’s still room for improvement.

A full review of FIFA 17 will be published in the coming days, this is just our look at the immediate technical aspects of the PC version.