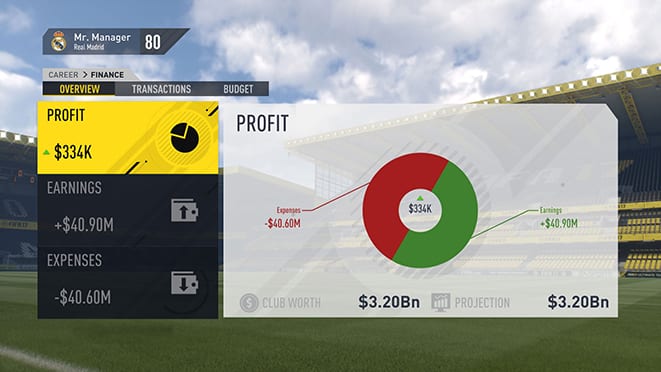 Career Mode will be getting at least a small amount of love in FIFA 17, manifesting as more specific board expectations and clearer representations of team finances. I’d hesitate to call these entirely new features, but they do seem to be expansions of existing aspects.

In previous recent FIFAs, the board of your club would set you league and cup targets, ranging from “look, just don’t be terrible” if you were controlling a lower league club to “win everything, obviously” if you were playing as Barcelona. Repeated failure to meet expectations would hasten your departure.

For FIFA 17, the board will also be concerned with ‘Youth Development’, ‘Financial’, and ‘Brand Exposure’. You’ll also have a ‘Manager Popularity’ rating, which will correspond to how well you’re doing in the job. Examples of objectives you’ll be given in FIFA 17 include things like “Promote youth players, return to the top division, expand your club’s brand in Asia [and] sign world class players”.

Judging by the released screenshots, some of these objectives will now span across multiple seasons. One of the Real Madrid screens says (if you squint hard enough) “Within 2 seasons in the Champions Cup, win the cup”.

On the financial front, FIFA 17 will give all clubs a ‘Club Worth’ rating (can’t wait to see EA’s estimate for Oldham Athletic), and a new set of financial menus will give “a detailed breakdown of your income from transfers, loans, match-day revenue, media and merchandising, [and] your outgoings on player and scout wages, youth facilities, stadium maintenance and travel”. That’ll presumably help you meet the board’s financial goals.

As well as all that, you’ll be able to select one of eleven default manager avatars to prowl the touchline in your place. Based on the screenshot it looks like you’ll be able to switch between three different outfits (probably suit, tracksuit, different coloured suit) too.

FIFA 17 is coming out on 27 September in the US, and will be out everywhere by 29 September. Here’s a gallery of Career Mode images. You can click to make the (a bit) larger, but they were also this small in the announcement.

Killing Floor 2 bursts out of Early Access in November