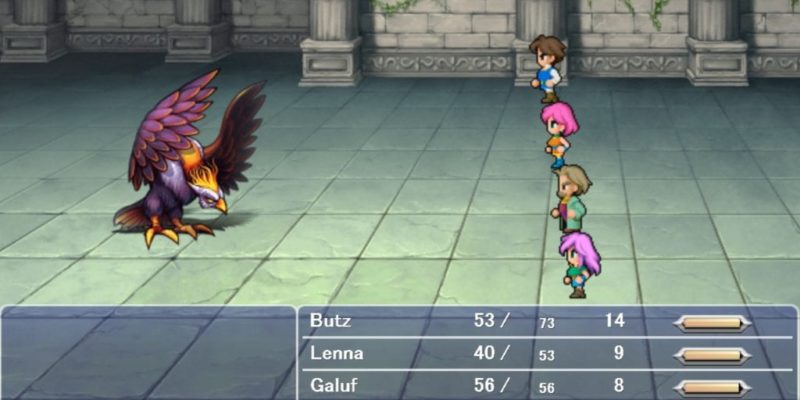 I mean, The After Years was a port of a decades-old console game (or, well, a port of a remake) and that had battles which ran at 15FPS. Type-0 HD was touted as a special PC version with all sorts of tweaks but, while not horrible (mouse and keyboard controls aside), it suffered an awful lot of optimisation issues. So I’ve given up. Final Fantasy V‘s port is going to be rubbish, isn’t it? It’s going to be awful. 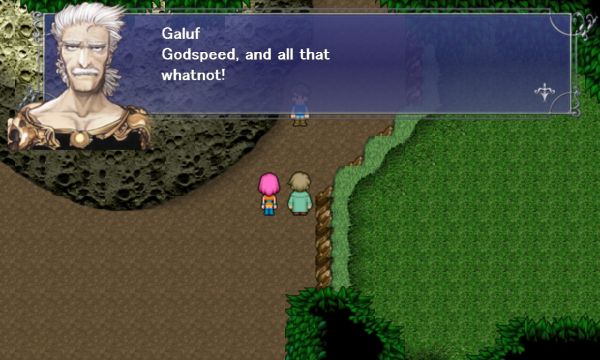 Surprise: Final Fantasy V‘s PC version actually isn’t terrible. It’s got its problems – a lot of them, honestly – but it’s still a decent step forward, and it addresses a lot of the crap that earlier ports have had.

First things first: it’s a 900MB download, after which we’re met with the obligatory launcher screen, offering PLAY or SETTINGS. The Settings menu has three sub-menus, two of which (because my controller is broken, so it won’t let me into the Controller menu) you can see below. 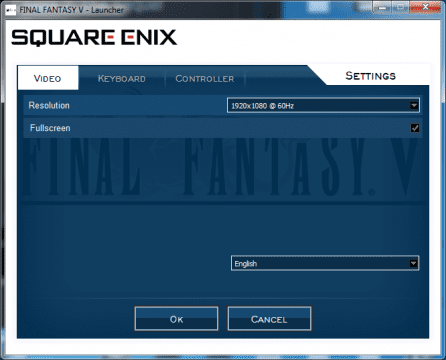 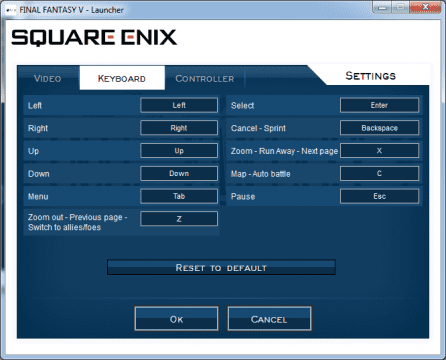 One big thing to note, here: you can bind absolutely every single bloody key. Yes, even the dreaded Escape key. And on that note, even if you leave it set to Pause, pressing it pauses the game and offers you the option of quitting! And if you say that yes, you want to quit, it asks for confirmation! Just like every other game out there, where you press Escape to go to a menu that has a separate Quit option on it! 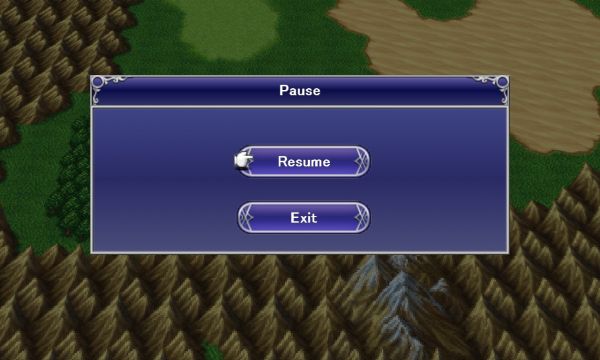 What you’re seeing in the keybindings screen are the defaults. I haven’t quite settled on what I’d like, since I’m used to playing emulated games with RDFC as as face buttons of the controller, but I could just as easily set it up any other way. I’ve mostly been playing around using C as accept and X as cancel, with the rest scattered in easily accessible locations… but with the menu set to Escape, and pause set to Tab. Because the game lets me do this. Yes. Although I probably do need to redefine the Previous Page/Next Page buttons and treat them as I would shoulder buttons, but eh, minor things.

You’ve also got a pretty wide range of resolution options (from 1920×1080 at 60Hz to 640×480 at 60Hz, although other resolution options allow for between 56Hz and 75Hz) but before you dampen your panties in excitement, there’s a tiddling little problem with this. Let’s start up the game in fullscreen 1920×1080 and take a look. 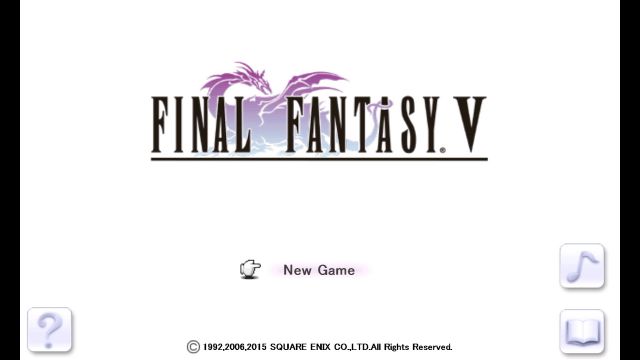 Yeah: there are massive bloody borders. As far as I can tell, the game is running in a slightly bizarre 5:3 resolution (which is odd, because the SNES ran internally at 8:7 and externally at 4:3, and phones and tablets tend to run at 4:3, 4:5, or 16:9). If my 3am attempt at mathematics is right, the game only supports one resolution that doesn’t have borders, and that’s 1280×768.

As far as I’m concerned, that’s not too bad. I’d tend to play something like this windowed anyway, not least because old-school sprite-based games like this tend to look a little bit arse when massively scaled up. I’d actually prefer to run it in a smaller window than that, but oh well.

Anyway, here’s the second bit of good news: this actually runs at 60FPS. 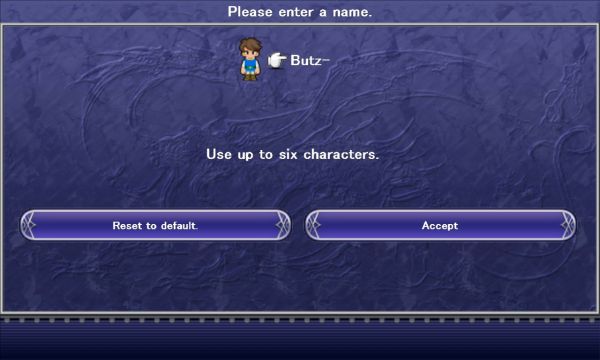 Now some more bad news. While it runs at 60FPS, it doesn’t really feel like it runs at 60FPS – although, again, this is possibly because of the fact that it’s old-school sprites with only a few frames of animation between them. If I’d had to guess I’d have said it was running at 30FPS, but checking the framerate via Steam’s in-game tool told me that, yes, it was popping along at 60.

There’s a bit of screen-tearing and a lot of stuttering and blurring when scrolling, and there are some oddities with the way some of the terrain is layered, with occasional bits of wall and ground looking somewhat out of place. I’m also not a big fan of the filtering that seems to be applied to the character sprites, because they seem really out-of-place with the rest of the art.

I should probably also add that I wound up with a headache while playing it, but as this was with just one play sessions I can’t say for sure whether that’s because of the game’s horrible scrolling or if it’s just because I really need some sleep. This might be fixable by running the game at a lower resolution so it’s less noticeable, but that presumably means putting up with borders. Hmm. Nonetheless, the stuttering when scrolling is really, really noticeable, and is honestly the closest thing this port has to being a deal-breaker. 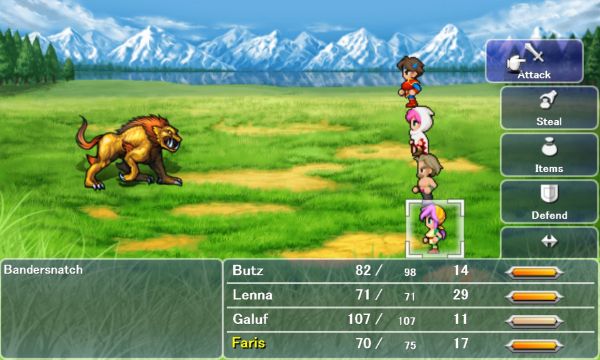 Also problematic is that this appears to be a direct port of the iOS version. Bits of the interface have supposedly been redesigned for the PC, and having not played the iOS version I can’t confirm that, but there are some interface quirks that I’d rather weren’t there.

Battle commands appear at the right in giant, invasive, touch-sized buttons, with a fair bit of scrolling required once you actually start unlocking Jobs and suddenly have more to deal with than just Attack, Items, Defend, and Row. And aggravatingly, you can’t even use the mouse to click these. It’s all keyboard or controller. The Sprint function, once unlocked, appears as a button in the lower-right of the screen… but you can’t click on it, and instead press the corresponding Sprint button on your keyboard to “press” it. Etc. 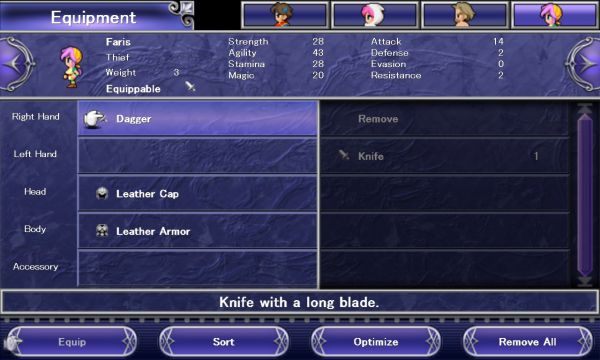 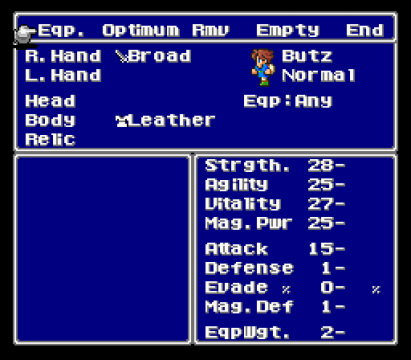 On the plus side we do have the iOS’s Quick Save option which is nice if you need to quit out in a hurry. In addition to this, the menu is relatively well-handled, and when you’re swapping Jobs and Equipment around constantly that’s probably a good thing, although I think I still prefer the original, which is also pictured above. The new one is occasionally annoying to navigate (particularly when trying to work out whether pressing Back will take you out of the sub-menu you’re in, or just take you back one step within that menu), but I think that’s more because I haven’t settled on a control scheme I like rather than because the system itself doesn’t work. Then again, the placement of some of the options in the submenus could be a little more streamlined, and these problems would be entirely fixed with mouse support.

There’s also no option to speed up the message speed outside of battles, which is a really minor thing, but one that always aggravates me. You can speed up battle text speed (and battle speed itself), but in lengthy conversations or cutscenes you’ve got to wait for the text to fill out character by character. It’s hardly slow, but I’m a fast reader and so I’m always left waiting for it to finish up. As far as I can tell, you can’t even tap a key to instantly fill out the text. 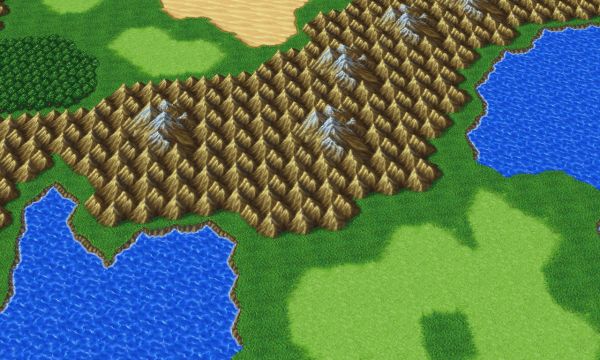 Mode 7 emulation confirmed. I remember when this sort of thing was amazing.

I think that sums up basically all of my actual complaints. That might not be all of yours, though, because there are a fair few things that are up to personal taste. 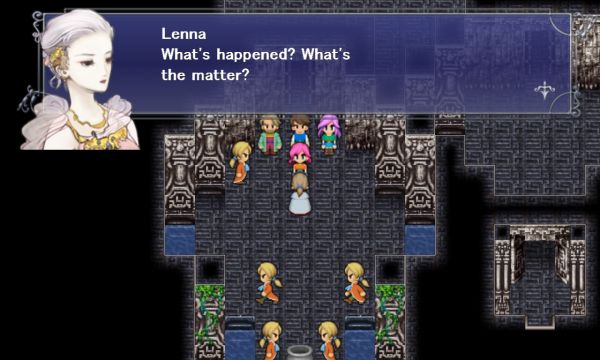 For reference, the person talking is the pink-haired lady with the orange shirt in the centre of the screen.

In this version, the headshots of characters in conversation are taken from Yoshitaka Amano’s concept art, which means they don’t really match up with the sprite. Now, I actually like this because I always liked Amano’s art, but I daresay there’ll be a large contingent wondering why Lenna has white hair in her character portrait but neon pink on her sprite.

As far as I can tell, the music is completely untouched – which, again, I like. The original soundtrack was decent, and I’m enough of a retro type that I’m pretty happy to have the original tracks rather than an arrangement or an orchestral re-recording, because for something like this I actually find the MIDI-esque quality quite charming. Others, though, may find this aggravating.

So, the verdict? Well, if this was a review with a score at the end, the port itself would probably earn itself somewhere around a 5. It’s definitely not bad, and it’s a giant leap forward from the horrors of recent Final Fantasy ports, but the battle interface and the weird issues with stuttering and tearing (which, going by the framerate counter, were not the game dropping frames) are a pretty serious hindrance. On the plus side, it controls pretty well on a keyboard and it lacks any real fatal flaws. At least, none that I spotted in the first hour of play.

(On that note, pro-tip: to disembark the boat you have to be totally stationary. Don’t try to disembark while trying to move into land.) 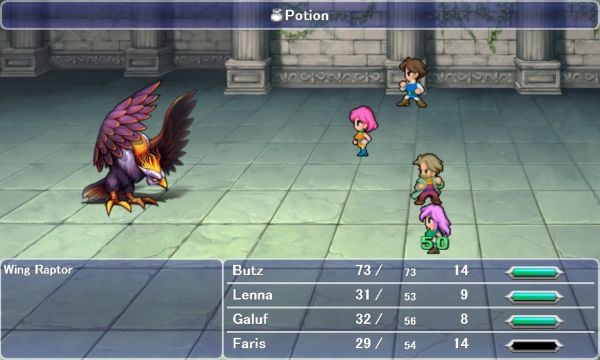 This is a pretty good example of what I meant by the sprite filtering. The monster looks sharp, and the backgrounds are decent, but the character sprites are a little blurred – sort of like the scale and interpolation filtering that emulators offered up. Only here, it seems mandatory. Then again, the monster and background are static sprites, which might be part of the reason.

It’s entirely playable – it’s just not as nice as I’d actually like it to be. The big issue, really, is that it’s actually less enjoyable and playable than just emulating the Game Boy Advance version of the game, and when an emulator does a better job of making the game playable on PC than an actual PC version, you know you’ve fucked up somewhere. That’s not an endorsement of piracy or emulation, either; it’s just a statement of fact.

On the plus side, it’s one of the best ports of this series we’ve seen yet. On the downside, it’s still not good enough that I can easily recommend it. Still, I’m probably going to stick it on my laptop and carry on playing it there for awhile. 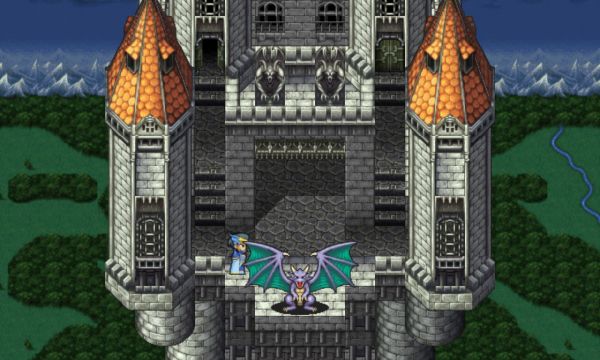 As for the game itself? Well, I really like Final Fantasy V. It’s the one that, to me, really nailed the Job system, and it’s a game from when the series was focused more on interesting mechanics than it was on plot. That’s not to say the plot was bad or non-existent – far from it – it’s just that it was more about “hey, look at how you can mix-and-match the Job classes and skills and equipment to shore up your weaknesses in whatever way you fancy” than it was the threat of a world-destroying villain and 20-minute cutscenes.

So yeah, an iffy recommendation, but still one that’s just about on the side of an actual recommendation. It’s not a terrible port. It’s just one that’s still far from being a good port, and it’s definitely not the definitive version of the game. Whether or not it’s worth your money comes down to how much you can deal with the scrolling, for the most part.

Let’s just hope that the inevitable Final Fantasy VI PC port doesn’t suffer these sorts of issues because that’s my absolute favourite game of the series, and if they fuck that up, the entire Version Impressions piece will just be a litany of swear words.