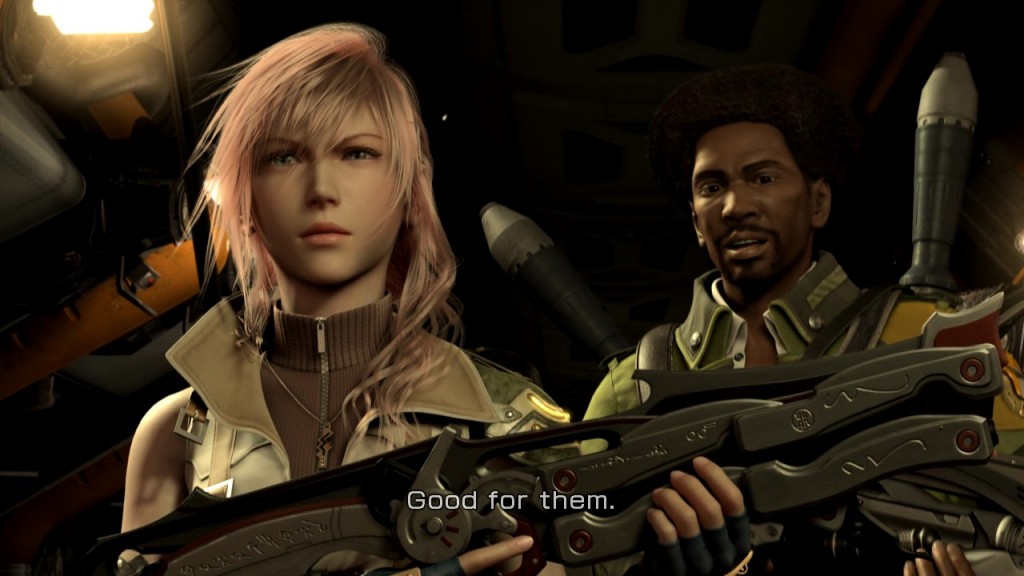 Quite the opposite for anyone who bought this, I’m afraid.

To the surprise of no-one who read the comments on my recent “Holy shit, Final Fantasy XIII on PC is gargantuan” news post, the PC version is a bit rubbish. Sorry, but there’s no other way of saying it. There are a few things it does right – which I would call the bare minimum requirements for a decent port, were it not for the fact that Final Fantasy XIII manages to fuck up things that I would call the bare minimum of any port – but, for the most part, it’s a bit of a catastrophe.

Let’s start out with what I said before: it’s gargantuan. We’re talking a 50GB download that extracts into a 58GB game. I was curious about why, so I had a look at the file folder to see if I could figure out exactly why it was so big. The answer: the movies. 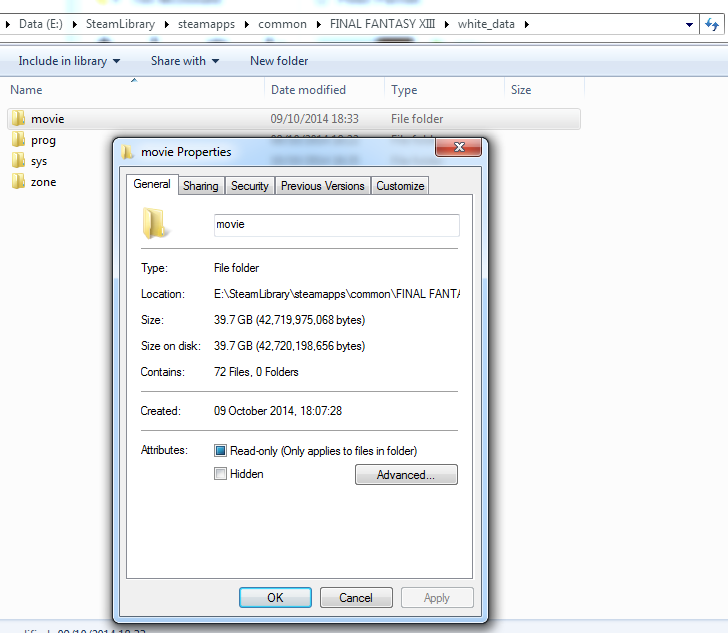 Unfortunately, the “prog” directory is not full of music by King Crimson and Pink Floyd.

The movies directory is a whopping 39.7GB, with the entire rest of the game making up a (relatively) mere 17.8GB. This becomes a little egregious for a reason I’ll talk about shortly, but first, let’s have a gander at the graphic settings. 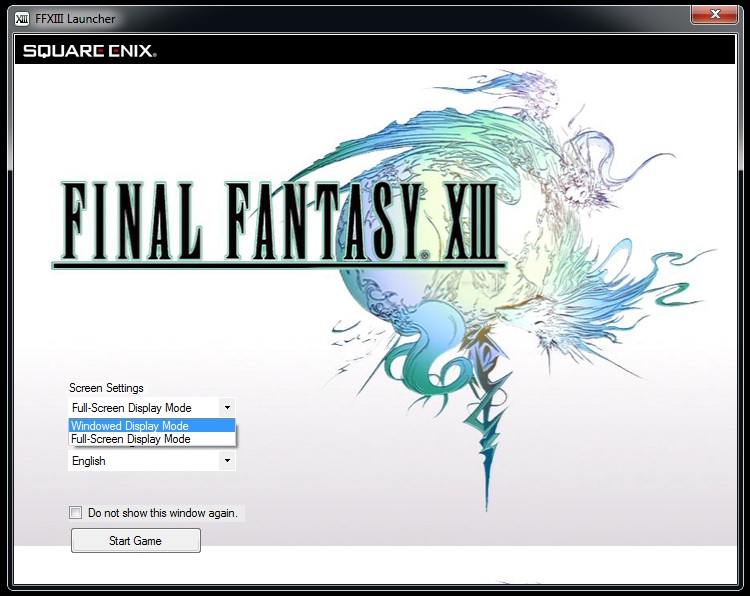 Yup. That’s all of them. You have the choice between Windowed, or Full-Screen. No, there are no graphic settings in the game itself; that is literally it. It runs at an enforced 1280×720 resolution, and there is absolutely no way of changing this. You can’t adjust the texture quality, or the shaders, or anything.

On the one hand, I’m sort of amused that PCs are easily capable of running one of the most visually stunning games of the previous console generation in a window. On the other hand, of course PCs can run it in a window: it’s stuck in fucking 1280×720 resolution.

I suppose the advantage is that it flies along at 60fps and if it’s running in a window, it actually looks quite nice while doing so. The disadvantage is that it’s in 1280×720 resolution, so if you want to soak up the beautiful art direction – one of the genuinely lovely things about Final Fantasy XIII – in fullscreen, then it’s going to look a bit shit. 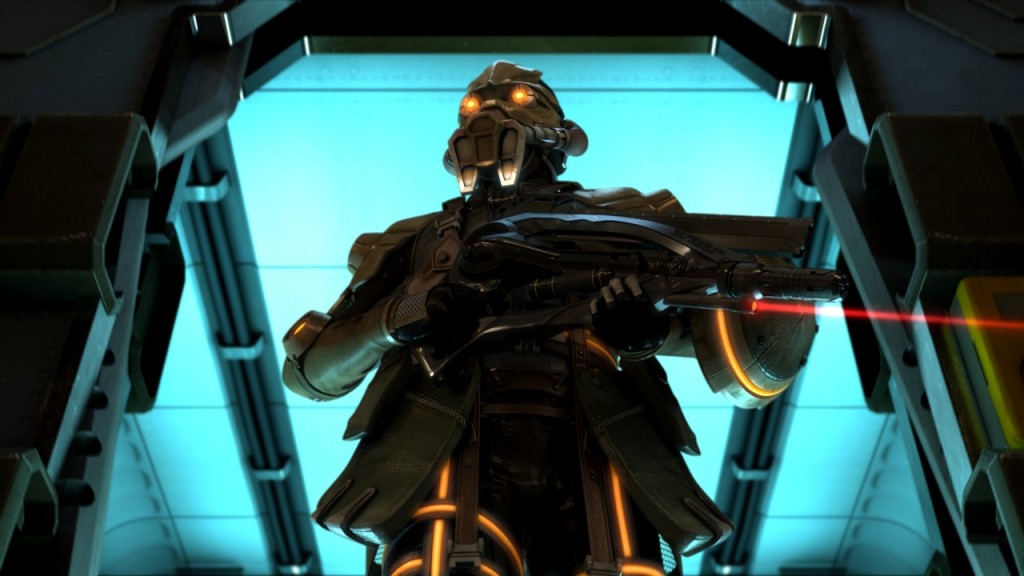 The cutscenes look lovely. Less so when they’re stretched to fit a monitor that prefers a much higher resolution, though.

Which is where we come back to the movies. I’m fairly certain they’re all rendered in 1280×720, which possibly explains the enforced resolution (although anyone who’s ever played an older game on a modern PC is fairly used to slightly shit-looking movies due to them being stretched to a higher resolution) but it’s somewhat ridiculous that they take up 40 gigs for what is – for PC users – a fairly low-quality render.

Anyway, it’s not all bad. Let’s have a look at the actual in-game options menu. 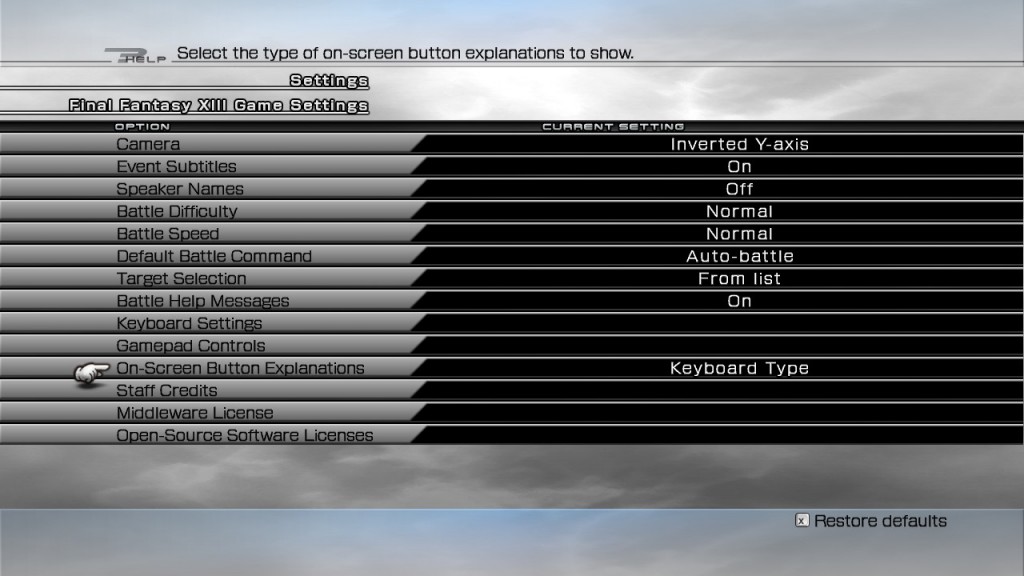 Well, I’m happy to see at least some of that list.

Happily, the keyboard and mouse controls actually work pretty well, too. WASD for movement, the mouse to control the camera, and you can use the left and right mouse buttons to select things and cancel selections. You can even use the mousewheel to scroll through your battle options, which means that it’s extremely comfortable to play with mouse and keyboard. There are maybe a few too many buttons clustered around WASD, but it’s totally workable.

There is perhaps one problem. See if you can spot it: 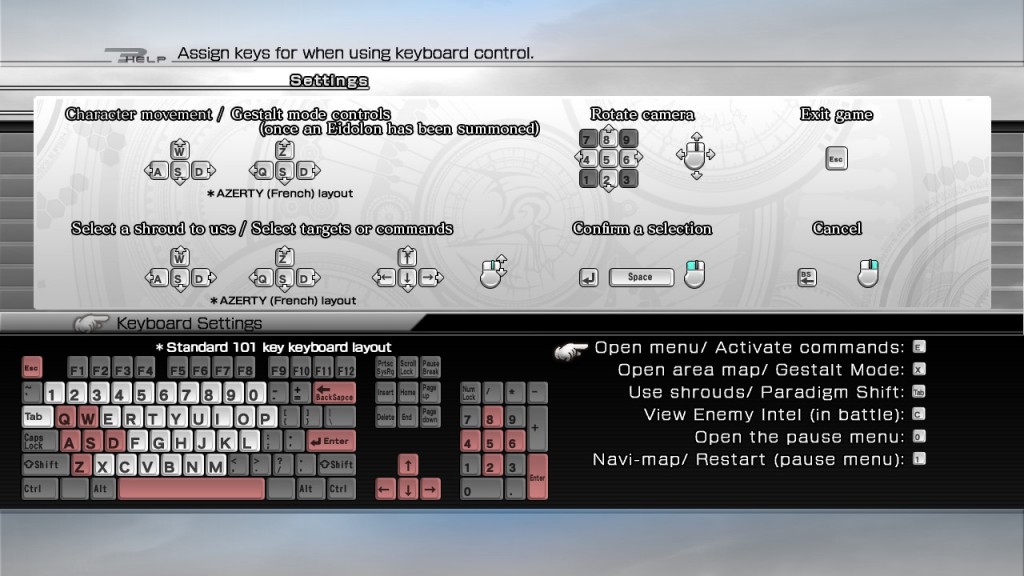 I’ve finished Final Fantasy XIII and I can barely remember what a Shroud is.

Correct! (Probably.) Only six buttons can actually be redefined. If you want to adjust the movement and selection controls, tough. I’ll grant that there are quite a lot of options for each of these, but I’d like to have the choice.

There’s also one other little issue with the options, which indicates a lack of attention to detail: 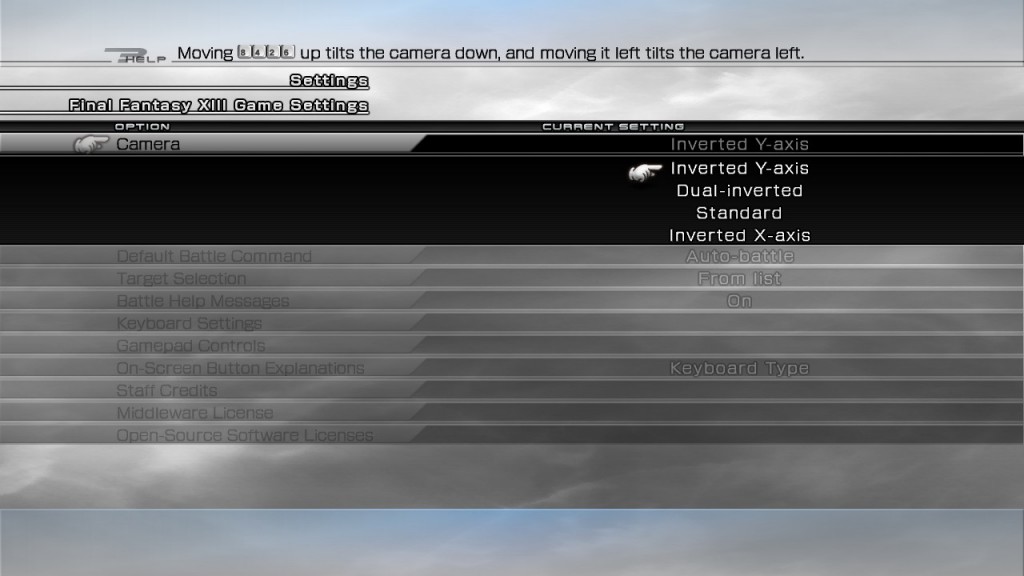 Sorry. I’m out of funny/sarcastic things to say about this game’s options menus.

If you haven’t spotted it, look at the tooltip. Moving numpad 8426 up tilts the camera down, and moving it left tilts the camera left? I’m sorry, Square Enix, but my numpad doesn’t actually have motion tracking built in. I think you mean “Pressing 8 tilts the camera up, and pressing 4 tilts the camera left.” There, I’ve fixed that one for you. You don’t even have to pay me. Mainly because I’d feel incredibly greasy taking any money from a port like this.

Anyway, this was about the time when I accidentally quit the game.

Yes, accidentally. In one of the most bone-headed decisions imaginable, the escape key does not function as “back.” It instantly quits the game. It doesn’t even offer a yes/no prompt – it just immediately kicks you back to windows. It does offer a prompt if you’re in windowed mode, but I cannot imagine how often I would accidentally close the game when trying to leave a menu when playing in full-screen. (Bonus point if this was the problem you spotted in the keybindings screenshot.) 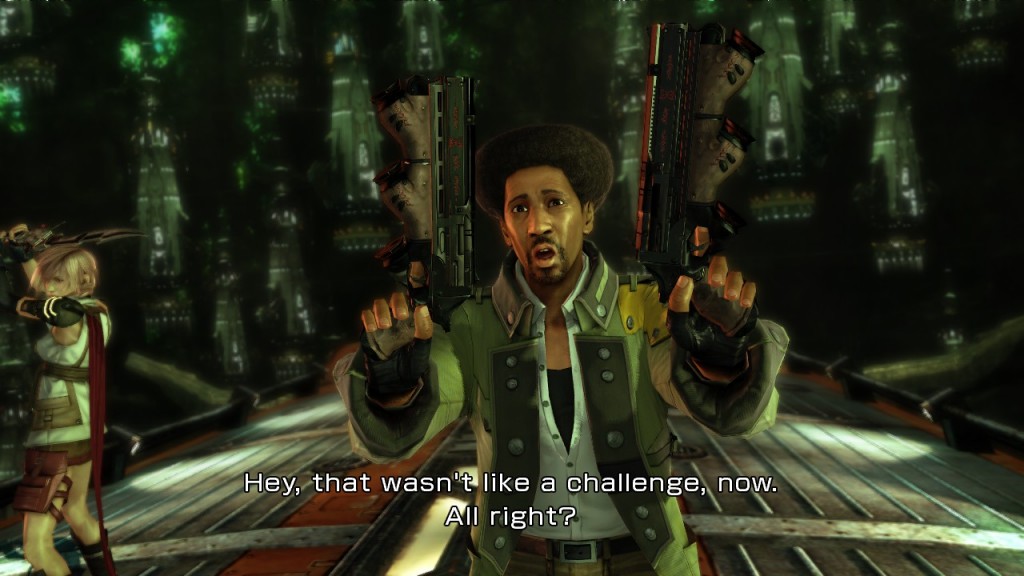 And that’s basically it for the PC port. The keyboard/mouse controls are decent, it offers keyboard/mouse prompts if you want them, and you can select Japanese audio… but you’re putting up with a bloated install size, some idiotic design decisions, and 1280×720 resolution. 1280×720! My old computer ran Far Cry 3 in a higher resolution than that!

The saddest thing about this is that internet hero Durante immediately released an update to his GeDoSaTo tool so that it supports Final Fantasy XIII. Here’s how the game looks when it’s actually running at 1920×1080: 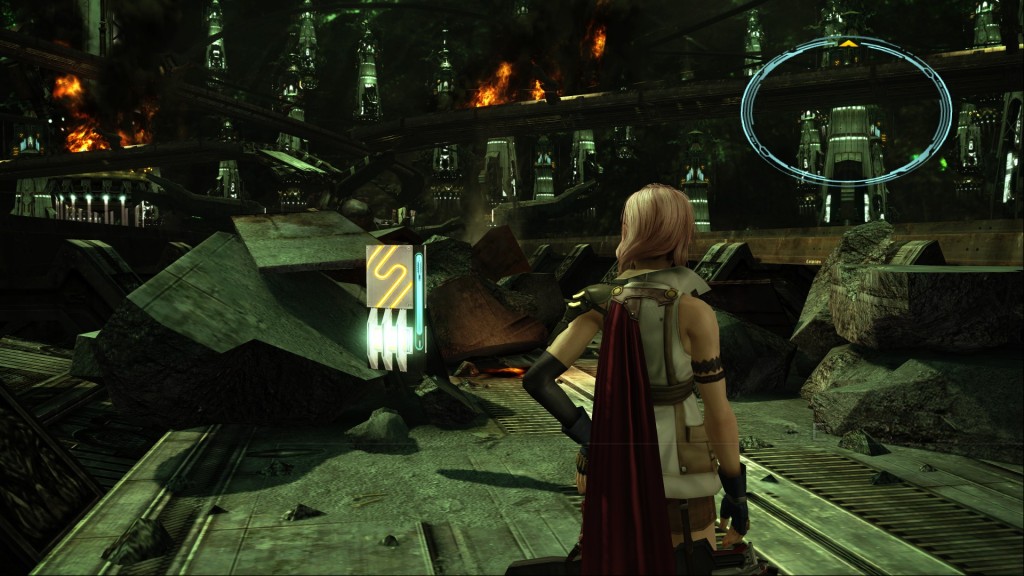 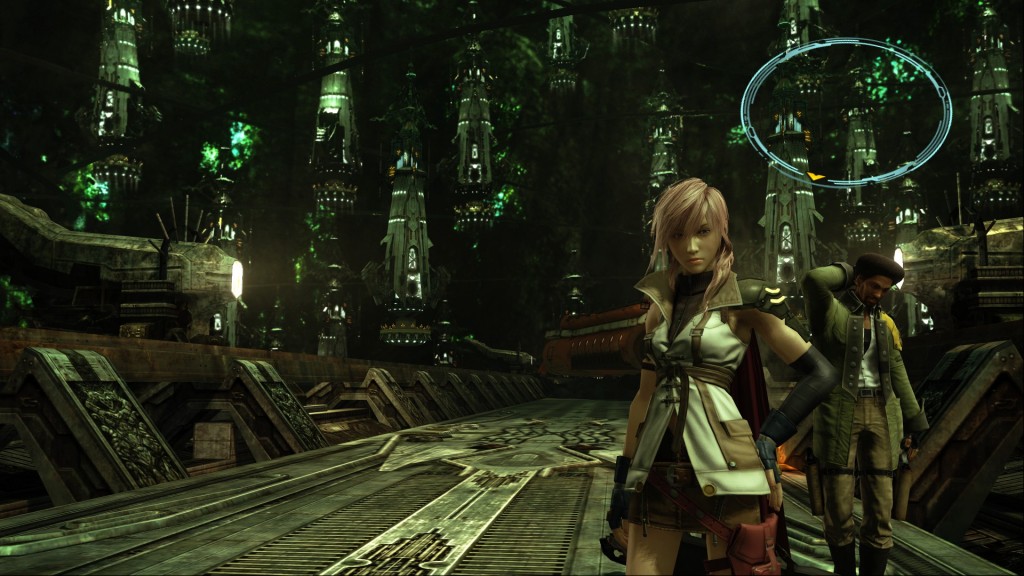 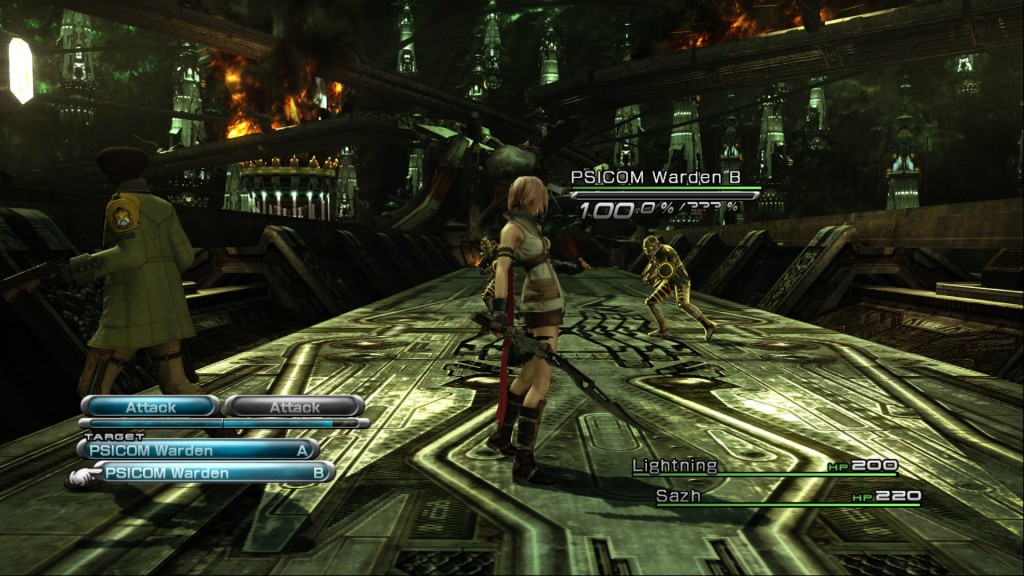 Isn’t that much, much nicer, even with the large list of bugs and known issues? Yes. Yes it is. And Durante did that in less than 24 hours.

Now, we gave the original Dark Souls PC port a bit of a pass despite it needing mods to really come into its own as a PC game, but Final Fantasy XIII is absolutely not Dark Souls. Square Enix is a little bigger than From Software, who candidly admitted that they had no idea what they were doing on PC (and they then managed a really good PC version with Dark Souls 2), while Square Enix’s other Final Fantasy ports are also a bit arse. Besides which, all the mod currently does is change the resolution, which makes a few things break and others look a bit janky. So no: shame on you, Square Enix.

I’ll point out, for the record, that I’ve played Final Fantasy XIII for a grand total of 20 minutes, and that’s obviously not long enough to judge the game. However: I very much doubt that the PC port will drastically improve in later sections, while there is every chance it’ll get worse. I mean, when I fired it up to fact-check one thing, it actually crashed on loading my save. (Also, I played it for many, many hours on console, so I’m fairly confident in saying that it’s a rather mediocre game.)

Final Fantasy XIII is an utterly half-arsed PC port which barely even deserves the term “port.” Charging £10.99 for this shambles is fucking disgusting.