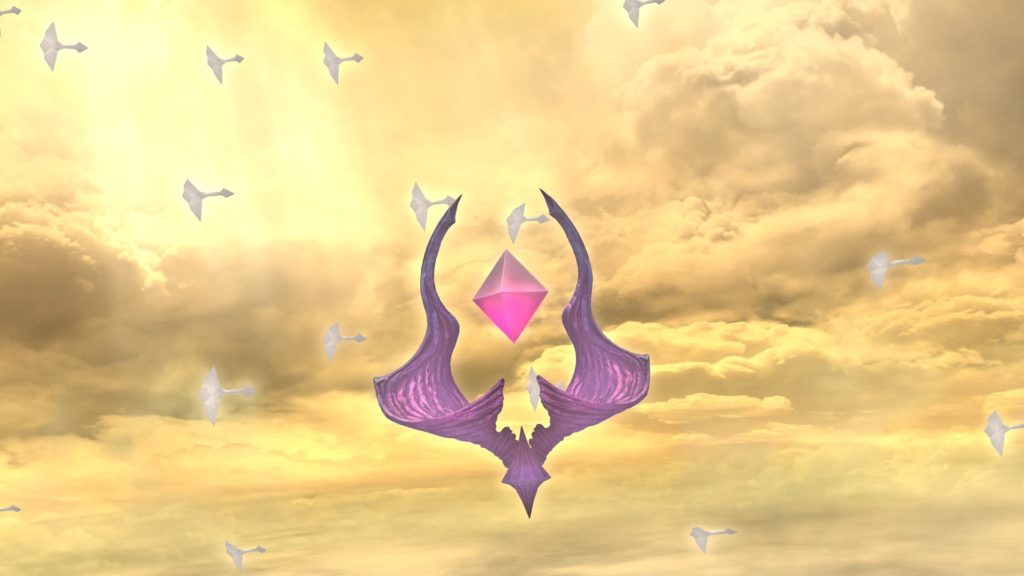 Oof. If the previous two Final Fantasy XIV fights can be described as “busy but pretty simple”, this one cannot. The difficulty of Eden’s Verse spikes a bit here, and it may be the most complex of this raid series. Get ready for Idol of Darkness.

There’s a lot in Eden’s Verse: Iconoclasm that’s tricky to explain in text (or in video form, for that matter) and a lot that can’t be mastered just by reading about it. Quick thinking and quick reactions matter a lot in this battle. 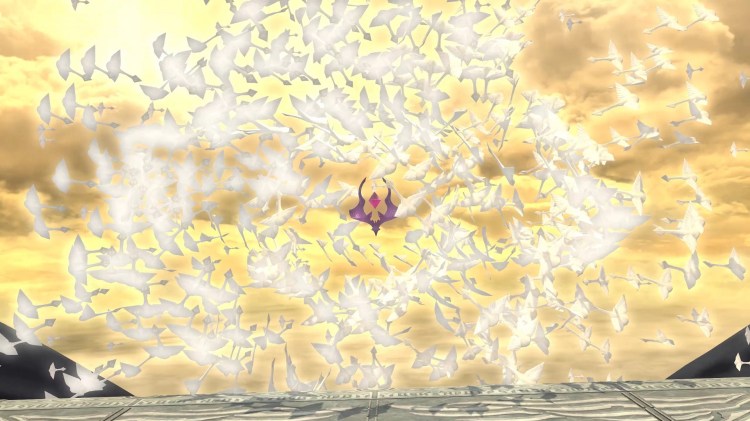 Tanks, make sure Unshadowed Stake is pointed away from the party. Everyone, when you’re hit with Away With Thee, make sure you’re teleported to a safe spot – inside a meteor tower or away from AoEs, and definitely not off the edge of the arena.

Words of Night is trickier. You’ll be hit with a dark or light debuff, and as you can’t dodge the attacks, you must get hit with the opposite color. This will then swap the color of your debuff. As such, when portals get involved, you need to get hit by one color and then line yourself up to get hit by the other.

If you can master the portals, you should be good with Iconoclasm. But it’s not the easiest thing to do, and it’s pretty crucial for the majority of the party to get the hang of it. 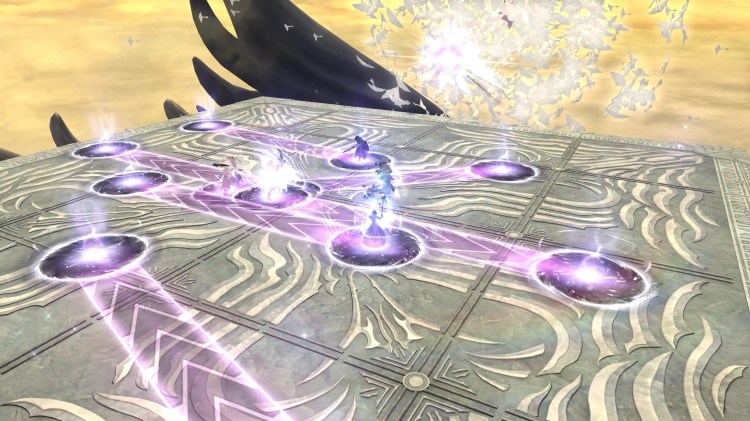 Thankfully, it’s pretty easy to control your teleportation around the arena. Just look for the linked gate that turns when you do.

Empty Wave – Party-wide AoE. High damage.
Unshadowed Stake – Tankbuster. The tank is marked, and the Idol of Darkness will fire a line AoE at them that will hit anyone else in the path. The tank must move away from the party for this.
Words of Motion – Packs of Sin Eaters will appear at the edge of the arena and will dash across the arena in the order they’re summoned. Stand in the path of the last ones to appear, and then once the first pack has swept through, move onto a safe line. This is a similar mechanic to Forgiven Obscenity, the final boss of Mt. Gulg, only it’s packs of origami birds instead of rings of light.
Betwixt Worlds – Red and blue voidgates appear. If you’ve played Portal, then you can guess what’s going to happen here: the Words of Motion will dash across the arena, enter into one portal, and then exit the other portal of the same color and dash across the arena from that direction. 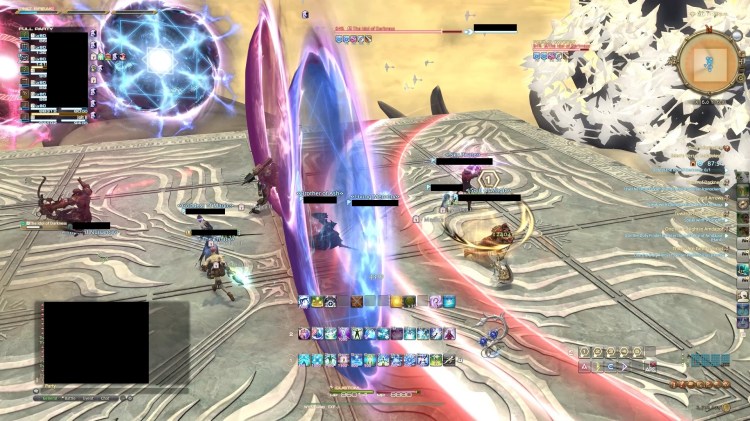 Attacks will fly through the portal and then exit through the matching color portal a few seconds later. Only the first cast has portals in the middle for easy dodging, though.

Away With Thee – Every party member is hit with an ability that’ll teleport them in a cardinal direction. When the debuff expires, you’ll be teleported to the indicated mark. Position yourself so you won’t teleport yourself off the arena.
False Twilight – AoE markers appear under every party member. Move away. This is followed by two party members being marked with stack markers: stack up in groups of four to share the damage.
Unjoined Aspect – Every party member is marked with either Umbral Effect or Astral Effect.
Words of Night – More waves of Sin Eaters, but these are colored white and purple. These all dash across the arena at the same time and cannot be avoided. You need to position yourself so you’ll be hit with the opposite color to the one you have: If you have Astral Effect, get hit by a purple wave, and vice-versa if you have Umbral Effect. You’ll take minimal damage and will then receive the opposite buff, so bear that in mind for follow-up Words of Night.
Idolatry – Two Idolatry adds spawn. Each of these should be picked up by one tank. Ideally, either position them at opposite corners of the arena or next to each other in the center. 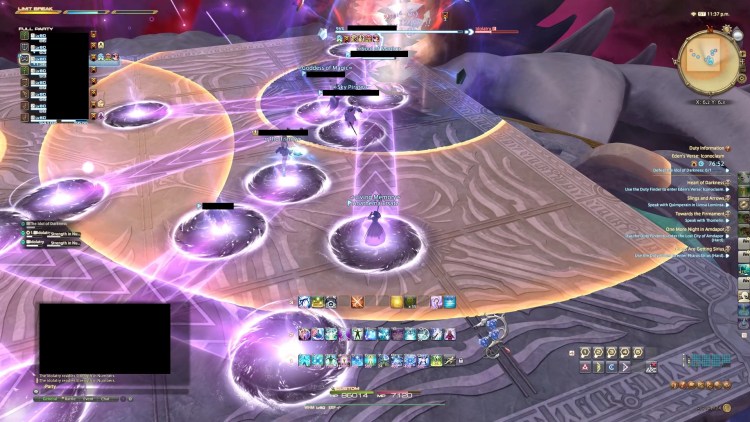 As long as you’ve got the DPS to handle them, the Idolatry adds shouldn’t cause much issue.

Strength in Numbers – Donut-shaped AoEs from each Idolatry add. You’ll be hit with Away With Thee before this goes off; make sure you teleport into a safe space (which is usually right next to them). Again, be careful not to teleport off the arena.
Silver Shot – Party members are marked with AoEs. Split up.
Explosion – Goes off if the Idolatry adds aren’t killed fast enough, inflicting 9999999 damage on the entire party. Burn them down ASAP to avoid this.
Empty Flood – Party-wide AoE used after the Idolatry adds are both dead.
Black Smoke – Two meteor towers will spawn as the party is once again hit with Away With Thee. Aim your teleports so that at least one person lands in each meteor tower to mitigate the damage.

So those are all the attacks, and it might not seem that bad. You’ve got line AoEs to dodge and some adds to kill. Even the teleportation mechanic isn’t honestly that bad when you know how it works. So what makes this so difficult? 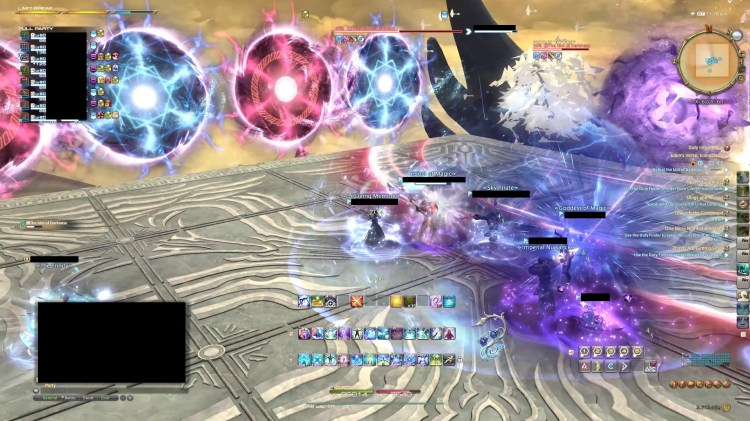 The simple answer is this: the portals, especially when Words of Night comes into play. With the initial Words of Motion casts, you need to pay attention to which lines are coming first and which portal they’re going to come out of. This can be tricky by itself. You need to figure out which line is safe to stand in first, which line you need to move to next, and then where you need to move to avoid the subsequent blasts from the portals. But this can be mitigated by one person being good at keeping track of this, sticking a marker on their head, and everyone following them.

But when Words of Night comes in, you’re going to get hit and you need to account for the fact that your buff changes every time you get hit. You might need to get hit with a purple one first, but then a white one when they come back through the portals. You need to get hit by one, then remember the portal the other one went into, and move. And this means you can’t necessarily rely on other people, and that you have to mentally calculate – very quickly – the exact movements you need to make. Following this, the Idol of Darkness will hurl out another one, and you have a scant few seconds to remember which buff you have and which line you need to walk into.

This also isn’t something you can mitigate once or twice by getting hit and picking up a Vulnerability stack. Getting hit by the wrong color Words of Night will inflict in the region of 250,000 damage on non-tanks, which is invariably fatal.

Final words on Eden’s Verse: Iconoclasm and Idol of Darkness 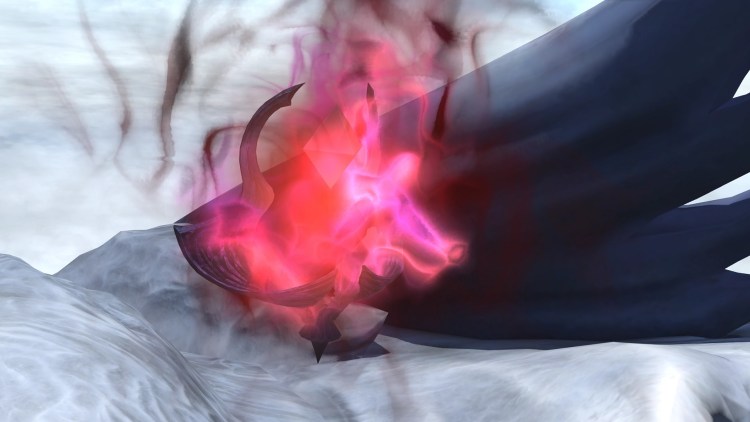 Now, in fairness, this still might not sound that bad. Once you’ve experienced Idol of Darkness for yourself once or twice, you’ll hopefully get the hang of it, and reading this takes the “what the hell” surprise out of a lot of it. The problem is that if you’re with people who died seven times fighting Ramuh in Eden’s Verse: Fulmination and couldn’t get the hang of “pick up a blue orb,” then you may have issues. (I speak from experience.)

Stick with it. The portals are 90% of the fight, and they can be initially confusing, especially with attacks entering two portals and then coming out of four. But a little time and thought can help you get the hang of it. Remember what color portal the attack you’re dodging is going into, and think about how that’s going to affect your next movements. If you can get this down, the Idol of Darkness will go down too, and that’s the end of Eden’s Verse: Iconoclasm.

For help with the rest of Eden’s Verse, or even the other trials, raids, and dungeons in Final Fantasy XIV: Shadowbringers, check out our guide hub for more.

Romance of the Three Kingdoms XIV review: Do not pursue this game

By Nathan Ball4 hours ago
Guides